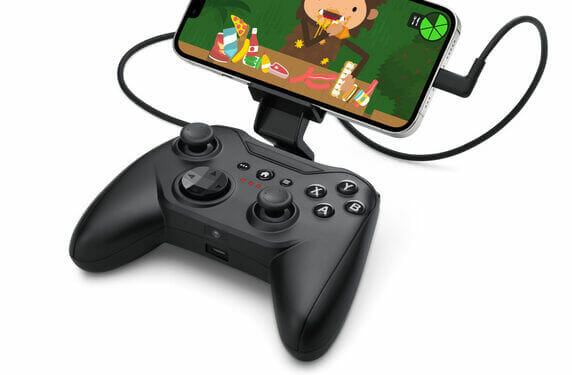 Cloud gaming is quickly becoming the biggest way gamers choose to consume their favorite hobby, from dedicated consoles like Xbox and PlayStation to more cloud streaming focused services like Google’s Stadia and Amazon’s Luna, many have seen this as the next logical step to expand gaming by bringing more high quality games to more screens.

One of the screens that have been a massive focus for developers is the one that sits in everybody’s pocket, the mobile device, for years Android and iPhone devices have made gaming a power point to devs and consumers. But not every gamer enjoys using their screen as a controller, and third party accessory makers have taken noticed.

There are a plethora of options for gaming controllers for your phone, but not all controllers are created equal, and Rotor Riot plans to create a controller that’s anything but equal to the everyday accessories currently on the market.

Rotor Riot, a company best known for their drone parts shop and lifestyle, has gone beyond just drone parts and has also dabbled in gaming with a PC build in collaboration with Apex Gaming and even with controllers with their RiotPWR line.

There are currently eight different variants for the Rotor Riot controllers, six iOS versions and two Android controllers, but instead of getting into each controller this review will focus solely on the iOS Controller RR1852 PWR Plus.

The Rotor Riot iOS Controller RR1852 PWR Plus has a pretty basic look, nothing about it really stands out, but that’s oddly by design. The controller is meant to resemble the Xbox controller and even sports a 8 directional d-pad similar to the more modern version of Xbox, there are no notable designs with the exception of the home button on the front.

The RR1852 PWR Plus comes with a ‘ZeroG’ mobile clip that attaches to the top of the controller via a screw, this helps keeps the clip secured and sturdy. Speaking of which, the clip itself feels ok and attaching it was no hassle, I never felt as if I was about to break it off while putting it on or taking it off. The same can’t be said about the built-in cable, that was a small hassle to deal with, it can get in the way strangely enough but thankfully the clip has wings on the side to help hold the wires.

The RR1852 PWR Plus is the first full sized Lightning connected controller, so being a wired controller how does it fair with battery consumption? The quickest answer is, very well, being wired means the RR1852 PWR Plus draws power from the iOS device itself. But the thing is, the controller doesn’t actually use a lot of power, it draws so little that I couldn’t tell the difference between the battery draining from regular gameplay without the controller and gameplay time with it.

To sweeten the deal the RR1852 PWR Plus has a pass through charging port, the port is also lightning cable supported, making the controller itself a pseudo charging station.

Hidden are four LEDs that’s meant to show who’s player number 1-4, a feature that RR’s own guide book called a ‘…future multiplayer functionality…’, so testing out that function was a no-go.

The controller has an option button that also doubles as a share button, with a double press it’ll take a screenshot and holding the button will activate screen recording, with the users permission. Sadly it doesn’t allow users to activate streaming on iOS devices, despite streaming to select services being available from the screen record menu.

The home button doesn’t serve much purpose outside very few games, I tried the controller out using Apple Arcade and Xbox Cloud Gaming, with xCloud the button functioned exactly like the one on the regular Xbox controller, with Apple Arcade it simply opened a sub menu with Arcade titles and achievements.

Everything has an app now, including controllers! The RR1852 PWR Plus comes with card that has two separate QR codes, one leads to the user guide and the other will send users to the App Store to download the Ludu Mapp app, this app functions as the home of sorts for gamers, it provides the best and easiest way to see what games support controllers.

It offers movies, walk through guides, xCloud and PS Remote Play set up and curated games that could help players find their next favorite game. It also functions as a way to update the controller’s software whenever they become available.

The app looks like a store, but the games aren’t downloaded through the app itself, users while be sent to the App store and only there can the game be downloaded on the device. Thankfully the app is updated in real time, so paid game prices are updated to match what’s in the digital store.

As for the controller itself, the app has a controller test option where users can get a visual glimpse at the controller’s layout and test which button isn’t responding and see the sensitivity of the thumbsticks and triggers.

Alright, now that we got all of the specs out of the way it’s finally time to get to what everybody is wondering, how does the controller actually feels to play, is there an input lag, what about the weight with the phone attached?

All perfectly good questions and the answers are very simple, the controller feels great and very familiar, it’s lighter than the Xbox controller but doesn’t feel cheap when you add the phone to the clip. The holder is sturdy and kept my iPhone 12 Pro Max from leaning or moving around, which is one of the great things about the clip being one solid piece, but the bad part is that the clip can’t be moved or adjusted.

The thumbsticks feel still at first, but as you use them they feel tough in a good way and doesn’t feel as if they’re going to suffer from drifts anytime soon, the d-pad pops out and almost feels like a button itself. Although using the d-pad is quite iffy, it never felt as if I was hitting the right direction thanks to the pads being so sensitive.

Input lag was nonexistent, there’s honestly nothing more I can say about that, the controller worked flawlessly while I played Call of Duty Mobile’s Battle Royal mode or sped through the snowy roads of Asphalt 8+ or during the blazing fast reaction time needed for Hades, the controller simply functioned as it should and quickly became my go to mobile gaming controller.

It makes screen shooting and recording quick and easy, the Ludu Mapp App comes in handy to help find games that support controllers front and center and the pass through charging port allows for ongoing gaming without interruption. Simply put, the Rotor Riot iOS Controller RR1852 PWR Plus is worth the $50 price, especially since you can use it on any lightning compatible device without the need to mess with Bluetooth every time you want to use it.

This review is based on a product provided by Rotor Riot

The Rotor Riot iOS Controller RR1852 PWR Plus is simply one of the best mobile controllers I've used, not just for its familiarity but for its simple plug in and play functionality, just wish the share function was better.

7 Reasons WordPress Is An Excellent Choice For Students

4 COOL PC and Console Accessories That Are Worth Buying