In the penultimate episode of Season 2, Arrow came out swinging once again and continued to surprise me with another outstanding 40 minutes of television. While the first few minutes of Streets of Fire were very, very busy, as a minimum of four separate plots were all playing out at the same time, everything that came afterwards was so brilliantly choreographed that I have little reason to complain.

The story began with Oliver and Laurel attempting to dig themselves out of the underground tunnel that Oliver purposefully collapsed at the end of last week in order to hold off a squad of Deathstroke’s Mirakuru-powered soldiers. Despite being a bit on the rushed side, I absolutely loved seeing Laurel use Oliver’s bow to blow a hole through the debris for them to escape through, and it’s so impressive to see just how far Laurel has come on this show. These last couple episodes have been like a reawakening for her, and it was a very cool moment to see her step up to the plate like that and save both herself and Oliver.

At the same time, however, I felt like Diggle’s fight with Isabel Rochev, who’s now fully costumed up as Deathstroke’s sidekick, Ravager, resolved itself a little too quickly. It was a cool fight, but ended a bit too abruptly, although having Felicity come in to save the day and literally ram into Isabel with a van was a great way to wrap it up. With that said, Thea had a much stronger story arc this week, as she not only had to escape from the super soldiers who were after her, but also had to face her father, Malcolm Merlyn himself, who is back and very much alive. 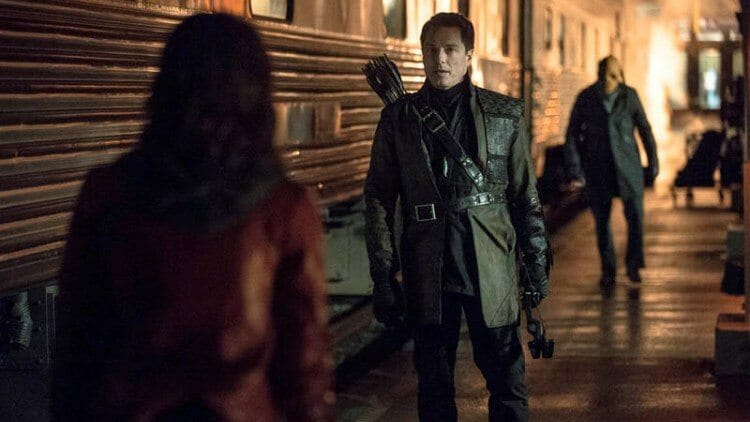 Bringing Merlyn back into the mix was a move I was desperately hoping the writers of the show would do here, and I wasn’t let down in the least. Sure, it was a little too brief, but John Barrowman has such a powerful presence on-screen that he stole every scene he was in, and even though we all know that he’s a murdering psychopath, I couldn’t help but feel a twinge of sympathy for him as he tried to connect with his estranged daughter, as she is literally the only possible family he has left. I think Willa Holland gave a really great performance as well, and her disbelief at Merlyn’s survival, and then distrust of his good intentions, was entirely believable. While the show certainly wanted us to think she killed Merlyn at the end of the episode, I think it’s a pretty safe bet there’s something else going on, and that we’ll be seeing plenty more of them both in the very near future.

I also really liked seeing Sara come back, and while I would’ve preferred more of an explanation as to what provoked her to come back, her reunion with Laurel, who finally discovered that her sister was the vigilante now officially (and gloriously) known as the Canary, was a powerful and heartfelt scene that was easily one of the best the two characters have had together all season. Even if it was one of the smaller plot threads of the episode, I think it might’ve been one of the best, and I really hope we get to see Sara finally settle into her role as a hero in the next episode, and hopefully, season.

Amidst everything else going on, we also got a nice send-off for Sebastian Blood, and seeing him finally come to his senses and attempt to confront Slade Wilson in his moment of triumph was a cool moment for his character, as we got to see that he isn’t the entirely heartless human being we all figured him to be. His guilt and dread over watching his coworkers die in front of him while his beloved city burned in the background humanized him in a way I didn’t see coming, and it made his attempted repentance, by supplying Oliver with a potential cure for the Mirakuru virus, feel a lot more genuine than it would’ve been otherwise. While we all knew that his betrayal against Slade would end in his demise, he gave a memorable last stand before Isabel impaled him with her two swords, and I couldn’t help but feel the slightest bit of sorrow for his character as he died in the very office, as Mayor of the city he helped destroy, no less, that he had tried so hard to attain. 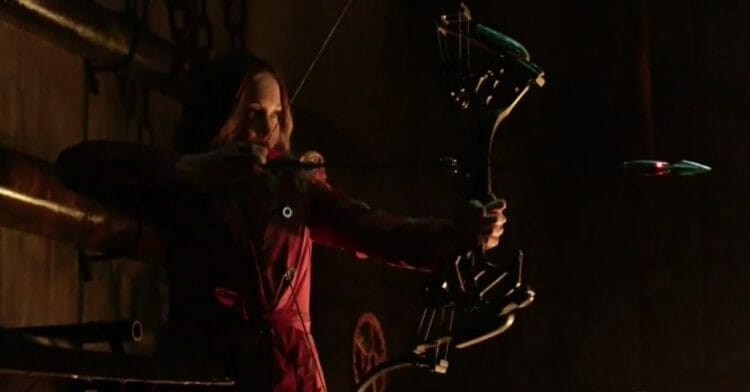 A few more things I want to mention; how great has Felicity been these past few weeks? I’ve always loved her character, but her heartfelt speech to Oliver, where she gave him the motivation and confidence needed to confront Slade’s army, was a phenomenal scene, and I’m sure I wasn’t the only one who got chills because of it.

Arrow has proven time and time again that it isn’t afraid to go big with its stories, and Streets of Fire only made this even clearer. Not only was the spectacle of the entire episode amazing and the bigger budget for Season 2 was very evident with cars and buildings exploding every which way, but the episode was far from done and literally ended with Amanda Waller holding a gun to Starling City itself, threatening to destroy the entire population if Oliver couldn’t stop Slade and his army by dawn. Was it a drastic twist? Yes. Does it make me any less excited for next week? Absolutely not.