An Epilepsy Test to your favorite music 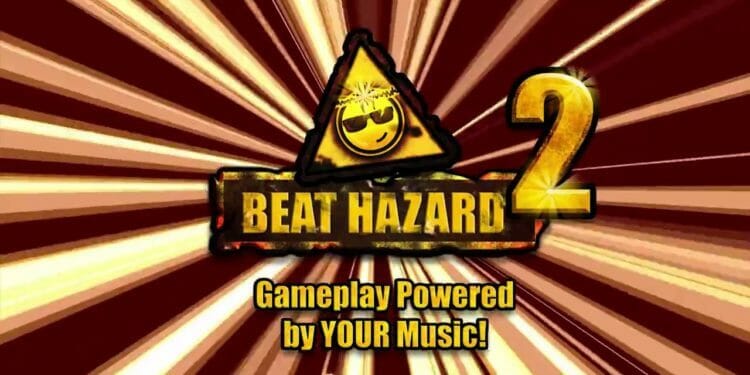 Beat Hazard has a photosensitivity warning. Beat Hazard 2 also has one. I don’t have any sort of condition that makes me susceptible to that, but I imagine if staring at a strobe light would cause a problem for you, Beat Hazard 2 will deliver an experience similar to that. That is, among other reasons, why I didn’t bother making a video for this.

What is Beat Hazard 2?

Beat Hazard 2, like its predecessor, is a relatively basic twin-stick shooter at its core. You move a ship around the screen blasting away at a variety of other ships and even screen-filling bosses. However, it stood out before, and continues to now, by integrating your choice of music into the entire scope of the game.

The enemies on screen, how aggressive they are, and even how significant, and damaging your projectiles are depends entirely on the intensity of the music. Songs that have quiet moments will create lulls in your battle and fast-paced songs will make for chaotic combat.  It’s essentially a rhythm game without you having to tap and buttons on colored circles.

The first thing I said after getting into my first song of Beat Hazard 2 was “this looks very similar.” So much so that I wondered if it was the same game with just new features. I decided to head into the original just to see and found out it was more of a case of rose-colored glasses.

This sequel does look similar to the original, and there are even several enemies that cross over to the new title, but overall it’s a step up across the board visually. This becomes even more apparent with the effects of the game.

Beat Hazard 2 gives you the option to turn the effects up to just a ridiculous level. You even get a higher point modifier by increasing the value of the visual effects. In the original, the upper echelon of this effect was effective, but in the sequel, you can have the intensity so high you lose visibility of your ship and enemies.

This extra layer of the challenge becomes especially overwhelming with particularly frantic and loud songs, like DragonForce – but this can also be extra fun if you can handle it.

One of the biggest differences between the original and the sequel is that you can now access any music you play on your computer. Nine years ago, streaming services weren’t much of an option, so you were relegated to your collection of MP3s.

While this was more than enough at the time, and Beat Hazard 2 still allows mp3 use, being able to use any song you can play is a great addition. You can easily play the game with streaming services like Spotify by just alt-tabbing and hitting play. The Shazam-like music identifier then determines the song and assigns high score values. You can also use other streaming sites like https://cloudcovermusic.com/music-for-business/spotify-other-services/ and play the game.

Back when Beat Hazard first came out, I was really into it because it put my favorite music in together with one of my favorite hobbies, playing games. There weren’t a lot of games out there like that, but rhythm games were starting to hit their stride so the ‘genre’ was ultimately saturated in the coming years. Now that time has passed, I have a renewed interest in these types of games and Beat Hazard 2 came along just in time to fulfill that.

Diving into the game and blowing up dozens of ships while your score climbs ever higher is as entertaining as it has ever been. There’s enough granularity in the difficulty system that you can keep it simple to sit back and enjoy the experience or crank it up to challenge those high scores.

The game also provides plenty in the way of progress with unlockable ships, perks, and challenges for specific songs. While the gameplay itself may not change up all that much, these additions give you a decent spectrum of content to explore… along with all of the music that there is on the internet.

Should You Get It?

It’s always easier to like a game when it has a good soundtrack. I can’t say much for the Beat Hazard 2 soundtrack itself though, because I play all of my favorite music pretty much exclusively. Whether or not it’s worth getting to you depends on whether you’re the type of person that enjoys sitting down to and listening to music. The gameplay props up your music more than the music props up the game.

It’s not to say that Beat Hazard 2 or any of the progression is anything sub-par, but those elements wouldn’t stand on their own. What makes it worth getting is queuing up some songs you like, maybe picking out ones that seem like they’d generate extra-entertaining combat, and seeing what happens.

I’m also particularly fond of chasing those high scores – though it seems most of the time players are working with 100% of the best score multipliers. Sometimes I pick an extra obscure song just to get first place (don’t go beating my scores!). If that seems like it would appeal to you, pick it up. If you’re on the fence, go grab the original Beat Hazard (it even has a free demo) to get a feel for what it can do.

Beat Hazard 2 is a twin stick shooter that doesn't offer much on its own, but does create an fun and interactive way to enjoy your favorite music.