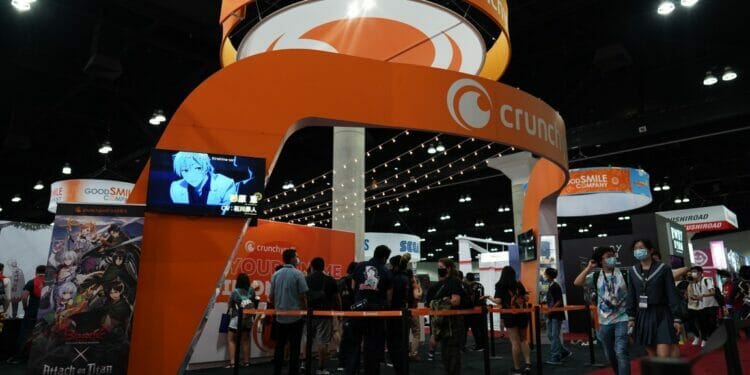 Crunchyroll recently released a slew of announcements to attendees at this year’s Anime Expo in Los Angeles over the 4th of July weekend. From My Hero Academia to Dragon Ball news along, acquisitions announcements for Solo Leveling and OVERLORD IV, as well as first looks at TRIGUN STAMPEDE, Mushoku Tensei: Jobless Reincarnation Season 2, To Your Eternity Season 2, and more, fans will have much to look forward to coming soon to Crunchyroll.

On Friday, July 1 during the North American premiere of the two new My Hero Academia Season 5 OVAs, “HLB” and “Laugh! As if you are in hell,” which will make their debut on Crunchyroll on August 1 at 5:00 am Pacific Time. The OVAs (Original Video Animation) will be subbed and dubbed.

At the TRIGUN STAMPEDE Lock ‘n Load Panel!! on Saturday, July 2, attendees were shown the first look trailer teasing footage of a young Vash and his twin brother Knives, as well as Rem, who tries to send the brothers to safety. Time flies, and we see Vash, grown up to be a wanted man with $$60 billion bounty on his head. A new key visual featuring Vash the Stampede also debuted for the newly announced anime series reboot that will be streaming on Crunchyroll in 2023.

During the Crunchyroll Industry Panel, held on Sunday, July 3, an abundance of electrifying news was delivered to whet fans’ appetite for some highly anticipated titles coming to Crunchyroll in the near future.

The following announcements were made:

Quotes from the Solo Leveling author and illustrator:

“About six years ago when I was writing the very beginning of Solo Leveling, if someone had said to me, ‘The novel you wrote will become a comic,’ I bet I’d have told them to stop pulling my leg. But now, I’m told that it’ll be animated?! Seriously, stop pulling my leg!… But these days, I’m feeling excited and thrilled. Since I’m still half-doubting that this is real, I want to see Jinwoo and the other characters get animated soon and feel relieved. I’ll keep working diligently while looking forward to that day.” – Chugong, Author

“Solo Leveling is finally making its anime debut. It feels like only yesterday that we got the offer for the anime adaptation. I feel so overwhelmed when I think that the anime is really being created right now. This is all thanks to you fans who love and support Solo Leveling. I’m filled with gratitude. Thank you very much. Also, please support the animation production team. If this anime gives new enjoyment to the readers, I’ll be very happy.” – DUBU, Illustrator