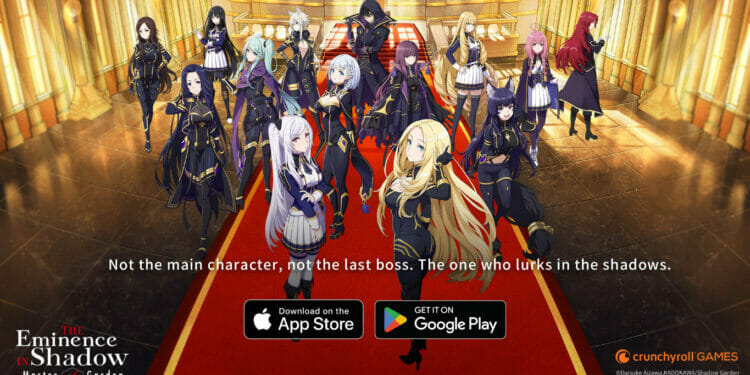 Crunchyroll Games has announced that its newest anime mobile RPG and PC game, The Eminence in Shadow: Master of Garden is available now worldwide excluding East Asia, Belgium, and the Netherlands, on iOS, Android, and later on PC. Crunchyroll also unveiled new images and gameplay for the game which is based on the popular light novel and new anime series The Eminence in Shadow.

The Eminence in Shadow: Master of Garden is a fantasy action RPG that transports players into a new world to build their team, battle wicked cults, and become the true mastermind in the shadows. The game features key characters from the novel and manga, including Shadow, Alexia, Alpha, Beta, and the rest of the main cast from the series.

Eminence in Shadow players can level up their gameplay and receive extra points for logging into the game and completing missions. At launch all players will receive 4,000 Instant Phantasm Gems for breaking 300,000 pre-registered players.

Title: The Eminence in Shadow: Master of Garden

The Eminence in Shadow Series Synopsis

“My name is Shadow. I lurk in the shadow, and hunt the shadow…”

A boy gets reincarnated as the noble house scion Cid Kagenou in a new world. He is neither a protagonist nor a last boss. He hides his powers to blend in with the mob, and manipulates the narrative from the shadows. As the self proclaimed “The eminence in the shadow”, Cid and his secret organization, “Shadow Garden,” work behind the scenes to defeat the dark Cult of Diabolos, which he totally made up. But it turns out that the cult actually exists…!

It’s a triple combo of the strongest hero, an excessive case of eighth-grader syndrome, and a seriocomedy of misunderstanding!

The Eminence in Shadow started as a web novel by Daisuke Aizawa, and has gained popularity as a novel currently being published by Enterbrain brand of KADOKAWA.

One week for one episode is never enough for me