Jonathan manages to complete his mission. 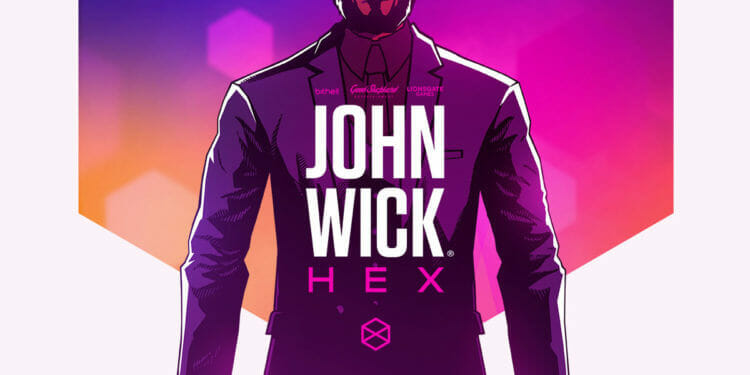 John Wick Hex describes itself as a fast-paced, action-oriented strategy game that forces one to think and strike like John Wick, the professional hit-man of the critically acclaimed film franchise. Additionally, the game’s creation happened under Bithell games with close cooperation from the creative teams behind the films. Therefore, prospective players have the chance to become John Wick, the Baba Yaga.

John Wick Hex acts as a prequel to the film franchise’s universe. This is due to the game taking place well before the events of John Wick, back to when John was the most dangerous weapon the High Table had in their employment and before he ever met his wife. Helen

The titular character, John Wick is searching for series stalwarts Winston and Charon, reprised by Ian McShane and Lance Reddick respectively. John Wick, on the other hand, only has some likeness to Keanu Reeves and nothing else. Hex, a new villain to the series, has kidnapped the pair in an attempt to dismantle the High Table in a fit of revenge.

This leads to the emissary of death, John Wick to hunts Hex down over a variety of locales; neon-soaked night clubs with harsh electronic music and silent, snow-slicked forests which quickly become drenched in bright pink streaks of blood from fallen foes.

The narrative justifies going from one locale to the next, however, it fails to employ the intrigue and lore-building that sits atop the high-octane action from the films. Additionally, Hex’s revenge tale fails to establish any sort of interesting backstory or lasting impression that impacts the franchise in any meaningful way.

John Wick Hex places the player in control of the John Wick in this action-strategy hybrid that brings itself across as a unique blend of strategic momentum-based combat. The game attempts to capture the tactical combat from the films. 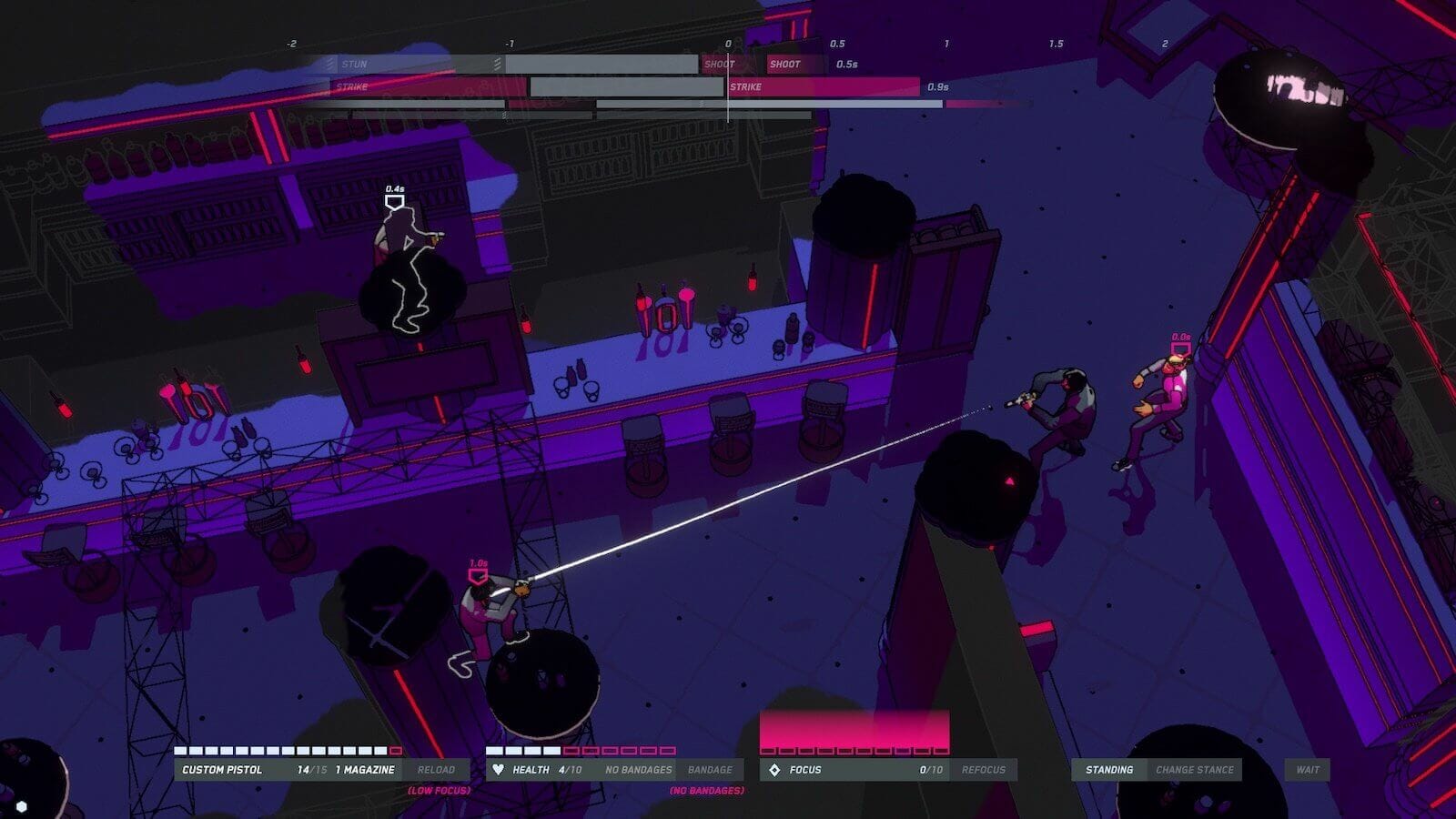 However, the pacing element is lost with the core design of the game in “operator” mode yet it returns in “expedited” mode. The former is slow-paced, while the latter is fast-paced (with only 5-seconds for the player to make their move). 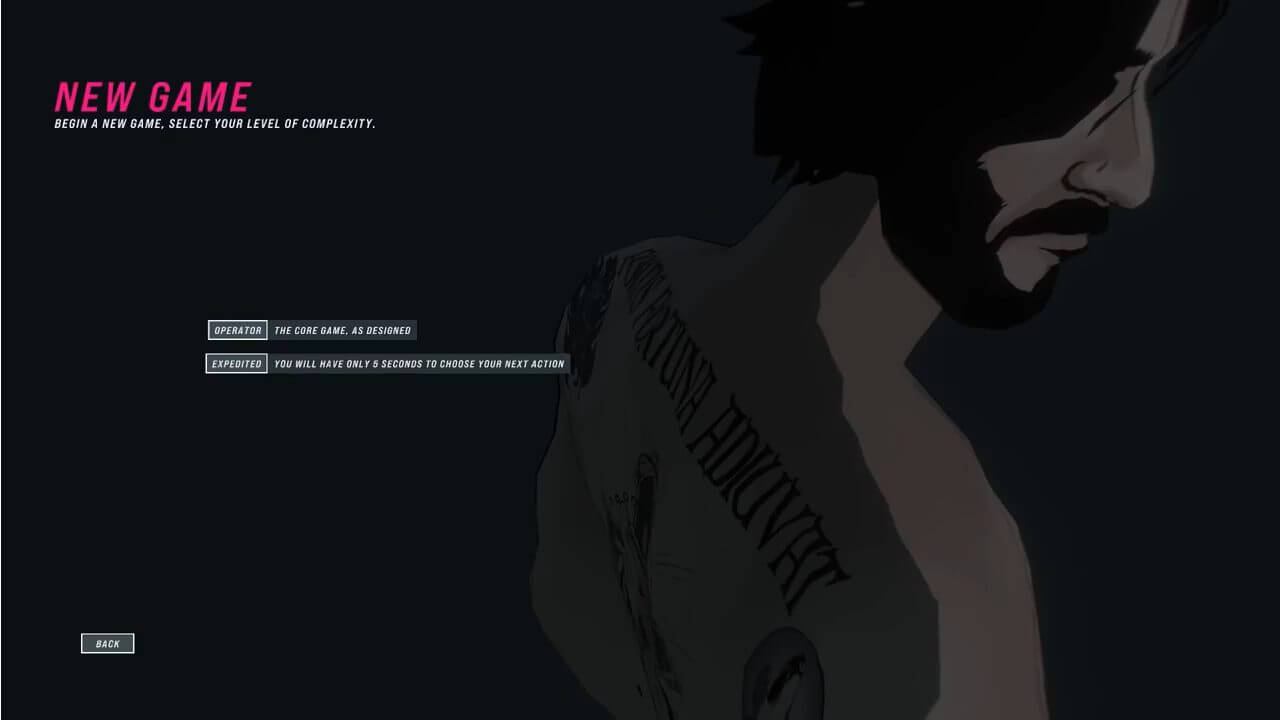 John Wick Hex boasts quite a formative, interactive, and always available tutorial. The game starts the player off with John skulking around back alleys in Chinatown. Furthermore, as the player progress through the multiple stages of the chapter, John Wick Hex slowly works in its different mechanics. 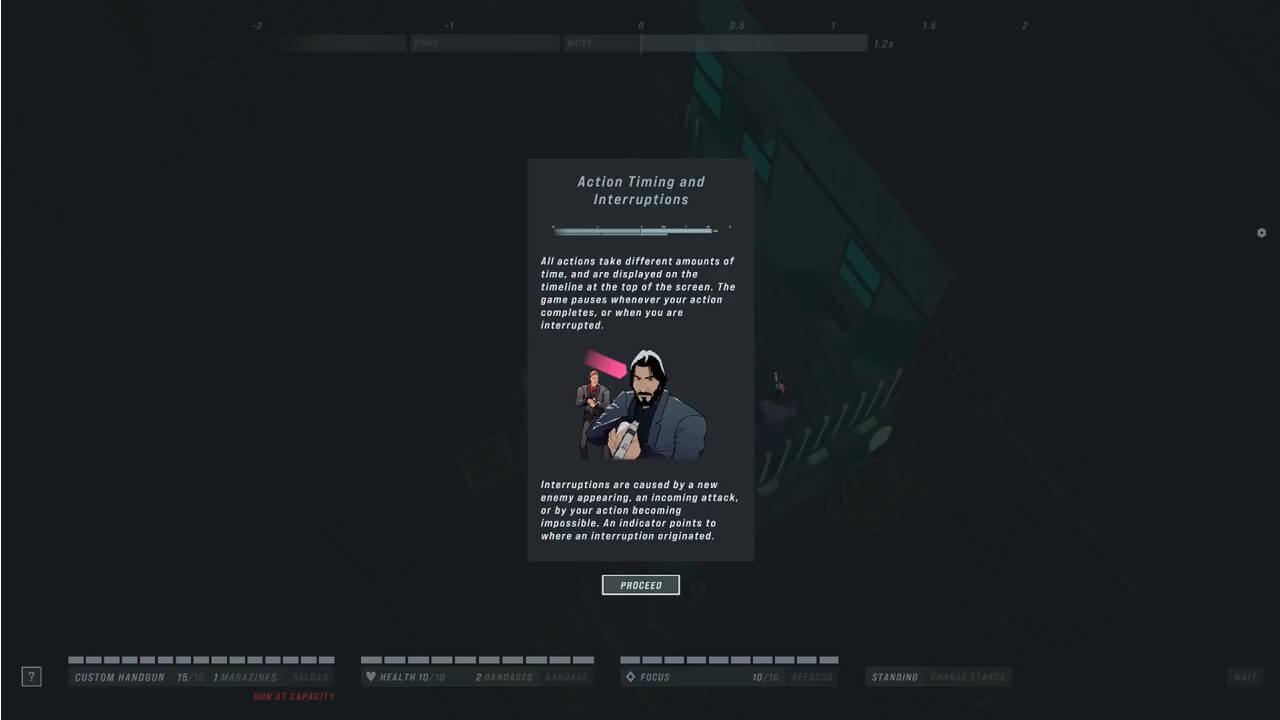 Thereafter, the player takes the reins after defeating the game’s first boss, which acts as a sign of them being familiar with the HUD (heads up display), the actions available to and controlling John. Additionally, the information shown through the tutorial is readily available for players to go over whenever they forget a mechanic or two.

John Wick Hex‘s controls are poorly implemented. Furthermore, there is a distinct lack of key mapping and game-pad support, This is surprising, given the financial investment put into the production of the game. Also, the camera controls are locked to the W, A, S, D keys with Q and E for rotation. 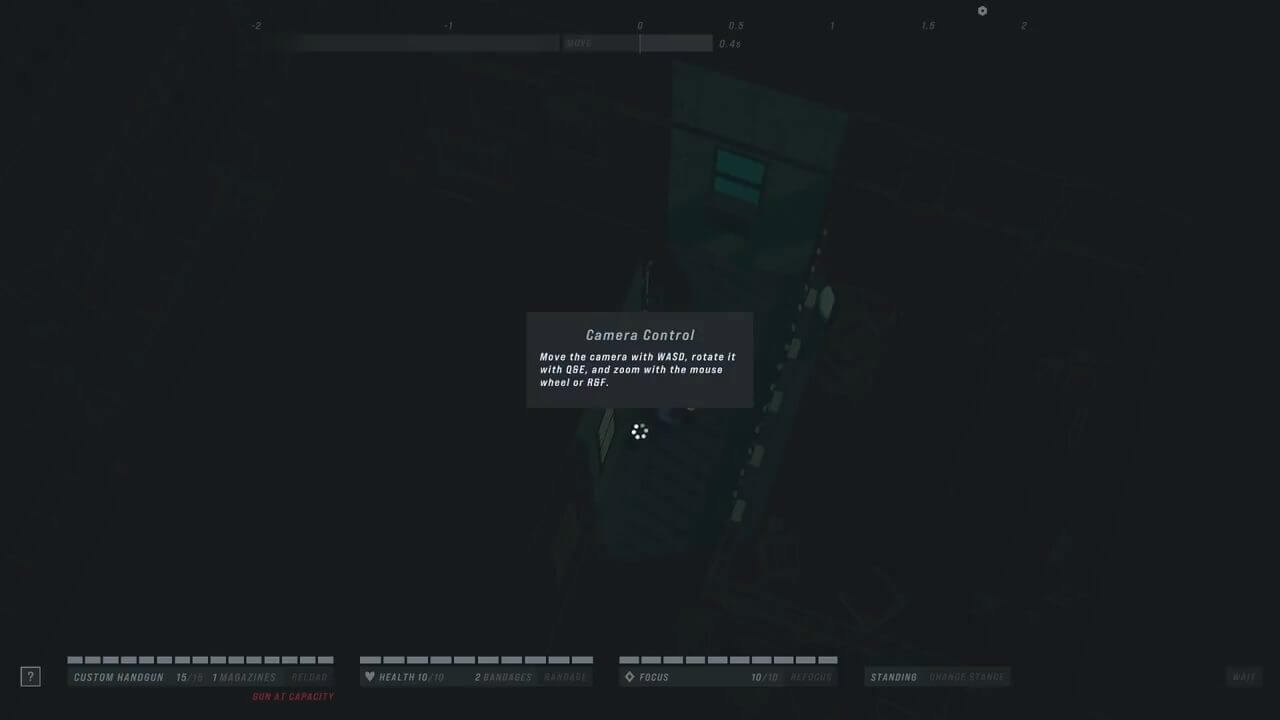 Another notable issue is the lack of mouse control for either push scrolling or rotation, and the mouse wheel zoom works merely small increments. Additionally, the keyboard zoom uses the R and F keys and functions better than the mouse wheel.

The HUD consists of timelines that indicates how long the player and visible enemies will take to carry out an individual action. This is vital, as the player will use it to gauge whether they can execute attacks before their enemies do, or at the very least make sure that during their attacks they are on the move; crouching or dodging to minimize chances of taking damage.

John Wick Hex boasts a planning phase before the beginning of any chapter except the introductory chapter. This allows the player to purchase global modifiers, as well as guns and bandages with an allowance of coins. The in-game currency is often rewarded upon the completion of a chapter, though any unspent coins are lost. Also, the game’s design forces players to purchase more powerful global bonuses, however, these are quite costly. 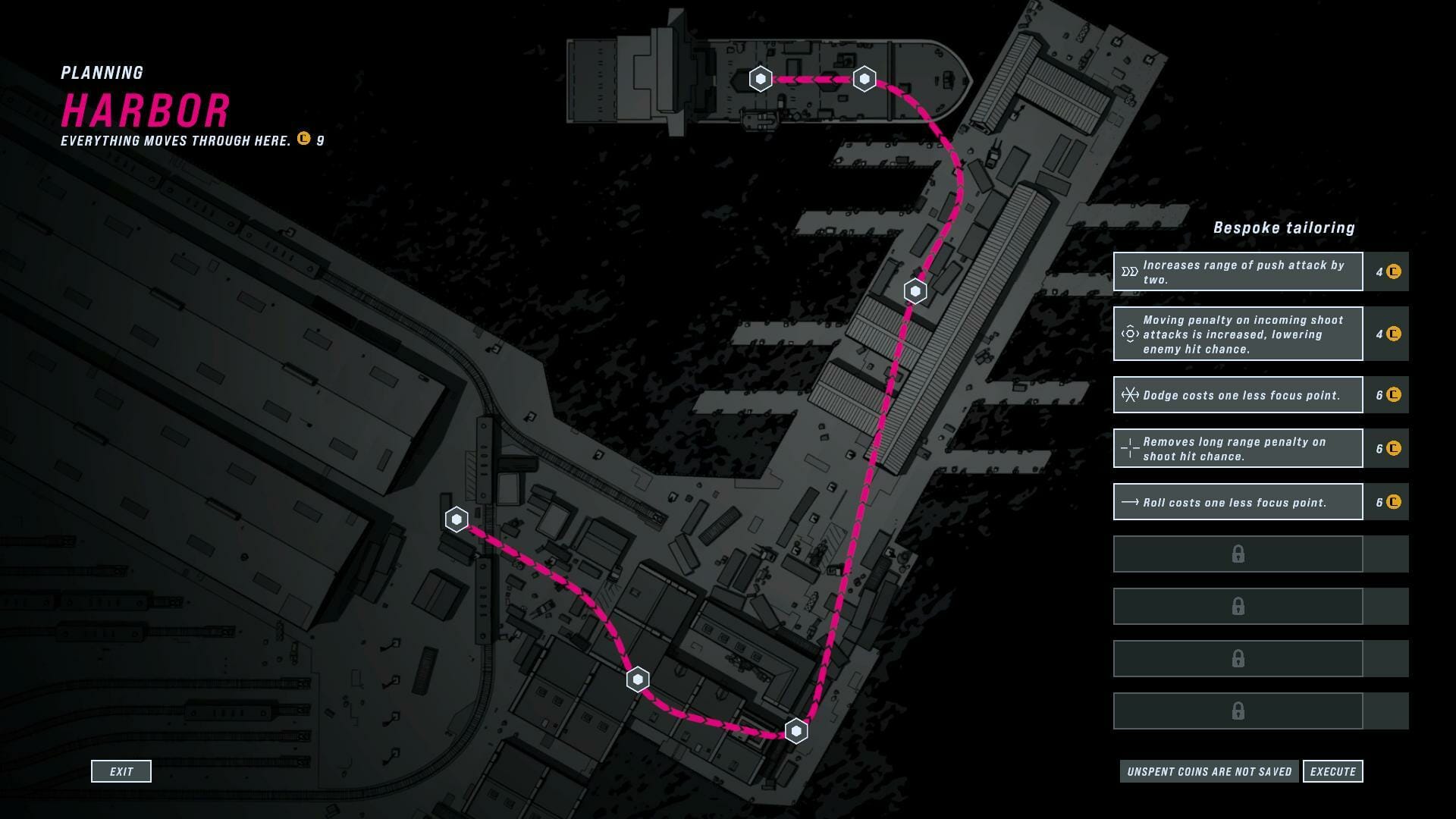 The enemies within John Wick Hex are not worth writing home about, given their mindless AI. However, this is further worsened with the game’s perceptual fog that keeps enemies hidden until the player (or the enemy) spots them. Overall, the two result in the player merely using the environment as a convenience, not an advantage when it comes to dispatching enemies.

John Wick Hex attempts to do well graphically yet fails at it, while excelling audially. The former is notable with the game’s cel-shaded art style complemented by a color-de-rigor neon palette of mostly blues and pinks (along with out of place fuschia blood splatters ). However, it is a sparing aesthetic that is flat in detail; character faces are beady-eyed and blank, and animations are limited. 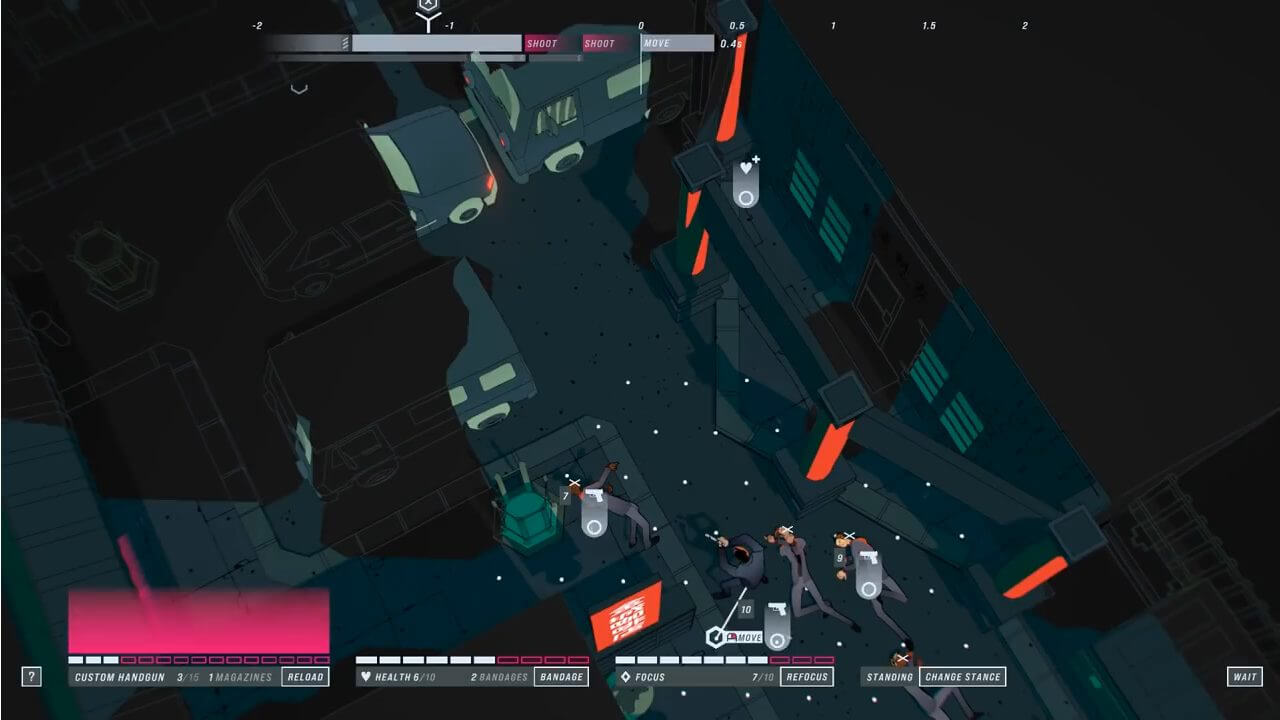 This leads to the promise of gun-fu battles turning into an awkward choreography of jolted enemies, open-handed slaps followed by a rather dainty kick to the crotch. The latter does much better due to having an original score by renowned composer Austin Wintory that leads to John Wick Hex almost matching the memorable soundtracks of the John Wick films. 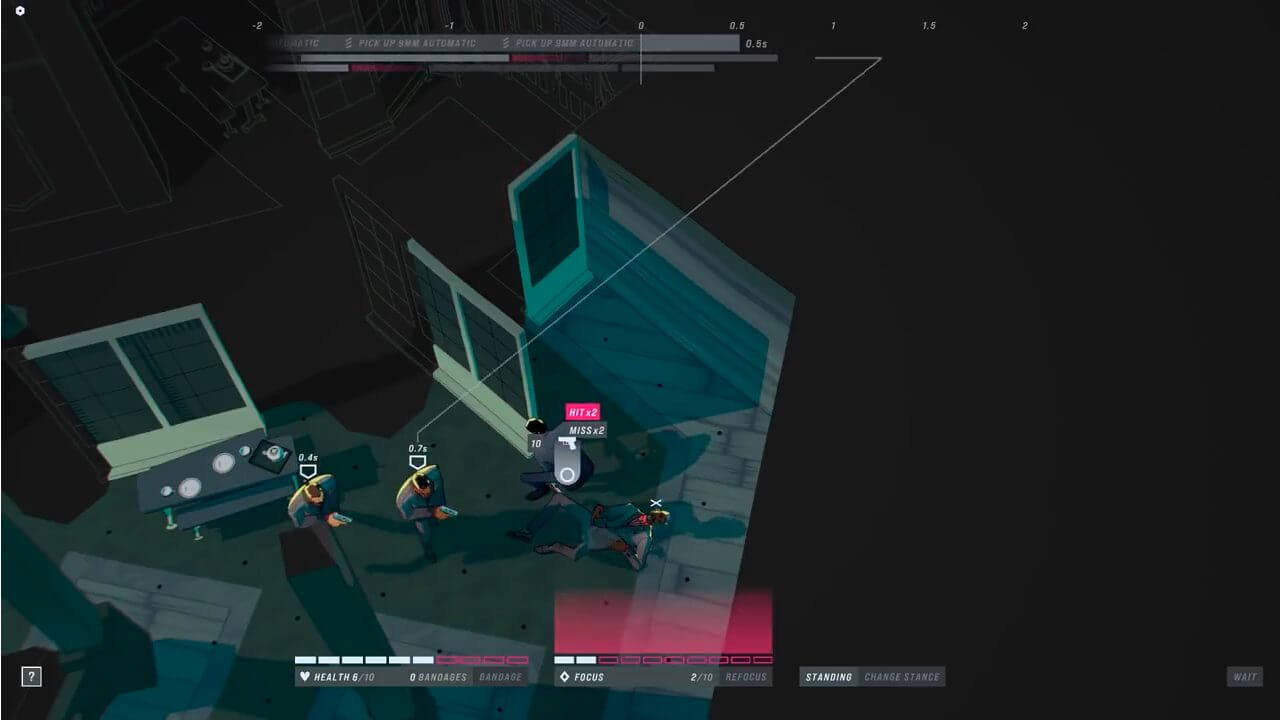 John Wick Hex is a game that promises prospective players with the chance to become John Wick, the Baba Yaga. However, the game fails to achieve this feat due to a myriad of factors undermining a game that has an inkling of potential. Additionally, John Wick Hex is only worth two playthroughs; on its ‘operator’ and ‘expedited’ modes.

John Wick Hex is a game that promises one with the chance to become John Wick, the Baba Yaga. However, the game fails to achieve this feat due to a myriad of factors undermining a game that has an inkling of potential.

Expanding Your Gaming Repertoire – Moving from Bridge to Online Casinos