XSEED Games has recently announced that Kandagawa Jet Girls is coming to the west. Not only that, but the game will be making its western debut on the PlayStation 4 and PC platforms. The jet racing game made by the creators of Senran Kagura will be releasing in NA for PS4 and on Steam worldwide. 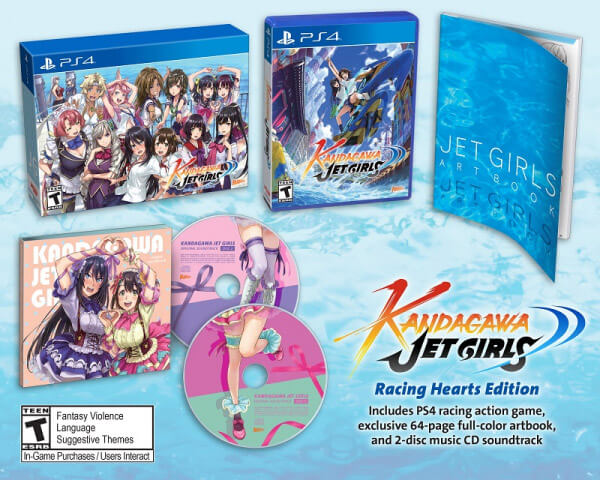 The physical edition of Kandagawa Jet Girls is dubbed the “Racing Hearts” edition. It will include a copy of Kandagawa Jet Girls for PlayStation 4, a two-disc soundtrack CD with 54 tracks, and a 5.5×7.3 inches softcover 60-page art book. Pretty sweet deal for the standard price of a AAA release. What’s more, all of this will be included in a special box with exclusive artwork illustrated by Hanaharu Naruko.

So, in case you’re wondering what this game is going to be. The game will let players go through races on board of high-speed jet machines. The Drivers pair up with Shooters to go through the courses and blast away the competition with a myriad of weapons. Additionally, the game will include a lighthearted racing drama in single-player.

If you want to watch the opening cinematic for the game, you can do so in the video linked above.

What do you think of the Kandagawa Jet Girls announcement? Are you going to purchase the physical or digital edition? Which platform are you going to purchase the game in? Let us know your thoughts in the comments section below. Speaking of Senran Kagura, did you know that one of the characters made a fighting game debut? If you want to know more, check out our Blazblue Cross Tag Battle 2.0 review.