Gotham’s rogues gallery has been anything but slim pickings, but the Joker’s presence/relevance to the series has long been one of the show’s big questions. This week, it’s Detective Jim Gordon’s date night abroad with Leslie Thompkins at the circus that gives way to a murder under the big top and their introduction to an auspiciously purple-clad gentleman named Jerome (*cough* Joker *cough*). 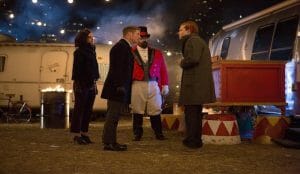 Our blind fortune teller of note, played eloquently by Breaking Bad’s Mark Margolis, rounds out the slightly creepy clientele of Gotham’s circus guest stars, and of course, John and Mary Grayson of a future Boy Wonder’s eventual family. While we yet again see a peek at it, the circus is arguably the smartest set piece the show’s had and one that could best explain the origins of Gotham’s “freaks.” Short of a rather darkly comedic scene of a psycho clown fight (*cough* Joker *cough) there’s not much more than some hysterically bad dialogue (butthead?) and tidily have Jim reconcile the feuding Graysons’ so they can think about “children” someday.

I’ll admit that I’m warming up to Morena Baccarin’s Leslie Thompkins and her budding relationship with Jim Gordon’s something worth exploring in theory, however contrived it still feels after only a few episodes. Out in the field, she’s a bit of a sleuth herself and a damn good one if Gordon would let her. It’s only a shame she has to be wasted on the wooden caricature Gordon’s felt like this season. Since when did you snort at fortune tellers when you’ve seen killer balloon men, Jim? 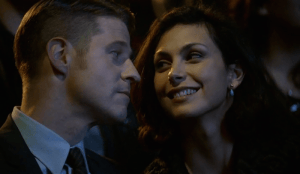 To be honest, Leslie’s a lot more fun and I’m almost keen on thinking she’s a lot more than just “enthusiastic” about criminology. Let’s say that she’s young, beautiful, and the only Arkham doctor on the show. So far, only Harley Quinn’s fit that mold in DC Comics’ lore. It’d be a long shot to assume Leslie is Gotham’s Harley, much less that she’s a femme fatale to Jerome given his apparent mommy issues, but it’d be an awfully good twist – one I’d doubt Gotham’s smart enough to pursue.

No one seems to know what they want on Gotham; not Penguin, not Mooney, and certainly not Jim or Leslie. Consummating the night in a locker room didn’t help the juvenility of their relationship, but Gordon was probably equally excited to just sleep in an actual bed for once. He’s got two twelve-year-olds squatting in his, err, Barbara’s apartment, after all. Why he’s sleeping in the station is beyond me, but why he’s skittish about women is reasonable, I guess, thinking of his wayward wife in question. 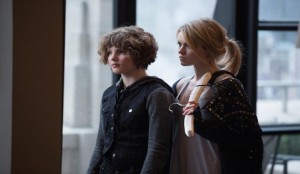 Sure as day, Barbara slinked back into the show drunk and disheveled, but only just so much to take fashion advice from Selina and Ivy. It’s hard to imagine her and Jim conceiving Batgirl anytime soon, much less getting back together. I’d surmise under those pretenses that if a Batgirl is born in the series, than it’s Leslie that’ll be the mother. Under that assumption, Barbara’s probably reduced to the jealous ex, a role that finally suits her deservedly low likability by this point.

That the blind led the blind this week would be a fitting metaphor for our episode. The Penguin’s silly subplot of “running” Fish Mooney’s almost vacant nightclub’s turned up nothing these past few weeks and likewise, Fish’s ongoing prison saga is equally pointless. Her rabble rousing, Braveheart-style speech about “family” was all kinds of awful and it’s beyond a stretch that the thuggish manly men under her employ are buying any of her “leadership.” I don’t know who “The Manager” is holding lock and key over her, but knowing Gotham, it’s liable to be The Penguin upstairs at the nightclub. 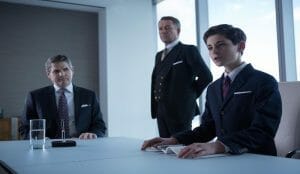 Elsewhere, Bruce finally wagged his finger at the Wayne Foundation’s board members with some very serious adult accusations (gasp), all while brandishing his black and white Mead composition notebook, mind you. Fun. In what could’ve been a hilarious Richie Rich moment, the board nearly laughed him out of the room and to be frank, I almost did too. What happens now? I suppose Bruce is going to court for two decades ‘til he dons the cowl or something.

That all leads us back to Jerome again and arguably the episode’s most bizarre triumph. As just about every promo’s already spoiled, Jerome’s duly obvious “reveal” as a genuine nutcase is stupidly unceremonious, so much as to call the show makers’ bluff. Series creator Bruno Heller told fans not long ago that The Blind Fortune Teller was to kick off the “beginning of the story of how the Joker came to be.” Just who Batman’s arch-nemesis was to be a mystery that’ll allegedly be carried on multiple actors. As a result, actor Cameron Monaghan’s guest appearance is nothing but wasted here – either he’s the real deal or he’s a passing fake with no room for the anonymity that’s empowered the Joker for over 70 years. 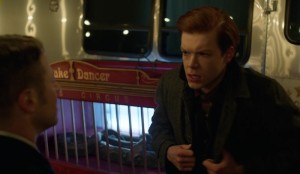 Monaghan does deserve props nonetheless for making the most out of his impossibly short screen time. The man does a wicked good laugh and his ear-to-ear grin is simply haunting. If Heath Ledger and Mark Hamill’s Jokers had a lovechild through some miracle of science, then Monaghan’s would surely be their devilish progeny.

It’s hard to ignore how long the nods and winks have taken their toll, all of them pretentiously whispering, “See! Did you see that?…” to watchers with no rhyme or reason. It’s long been a disservice to the show and I’d dare say the same for The Blind Fortune Teller, if not for the hysterically bad antics displayed this week. Gotham, it seems, is just good for a laugh, maybe a great one if the season keeps this crazy scripting. With the Joker, I can’t help but feel like Gotham’s played almost every card in its deck and as bad of a hand as it’s had lately, The Blind Fortune Teller didn’t change its luck. But it did just make things a lot more interesting.

[…] the title might imply, Cameron Monaghan’s evil laugh couldn’t silence the breadcrumb trail to the Joker(s) the series seems bent on leaving. […]