by Abdul Saad
in Anime and Manga, Anime/Manga Review, Opinion
0

Time Paradox Ghostwriter is quite an interesting manga. What I first thought to be a manga series about the adventures of a time-traveling mangaka and their slew of hijinks turned out to be a social commentary on the often crippling nature of the modern manga industry.

The manga follows Teppei Sasaki, a 24-year-old budding manga creator who after getting first place in a manga competition, decides to follow his dreams of becoming a full-fledged mangaka after school while his friends chase traditional careers. Unfortunately, despite his relentless pursuit of having a manga published on Shonen Jump, each of his storyboards is rejected by his editor, who claims he has no talent. On the brink of quitting on his dreams, a bizarre event occurs as lightning strikes Sasaki’s apartment, seemingly destroying his microwave. However, something even stranger happens. A Jump magazine from ten years in the future appears, and a specific manga in the magazine called White Knight instantly grabs Sasaki’s attention due to the sheer brilliance of its art and storytelling.

Thinking the manga he read was a dream, Sasaki decides to draw all he read and submit it in the latest Shonen Jump selection meeting. Unsurprisingly, it gets selected and winds up being a huge commercial success despite not being his work. Sasaki eventually realizes he’s plagiarized a manga ten years in the making and even meets the manga’s would-be creator. The story becomes simultaneously more interesting and convoluted from then on, with a big twist right in the middle. 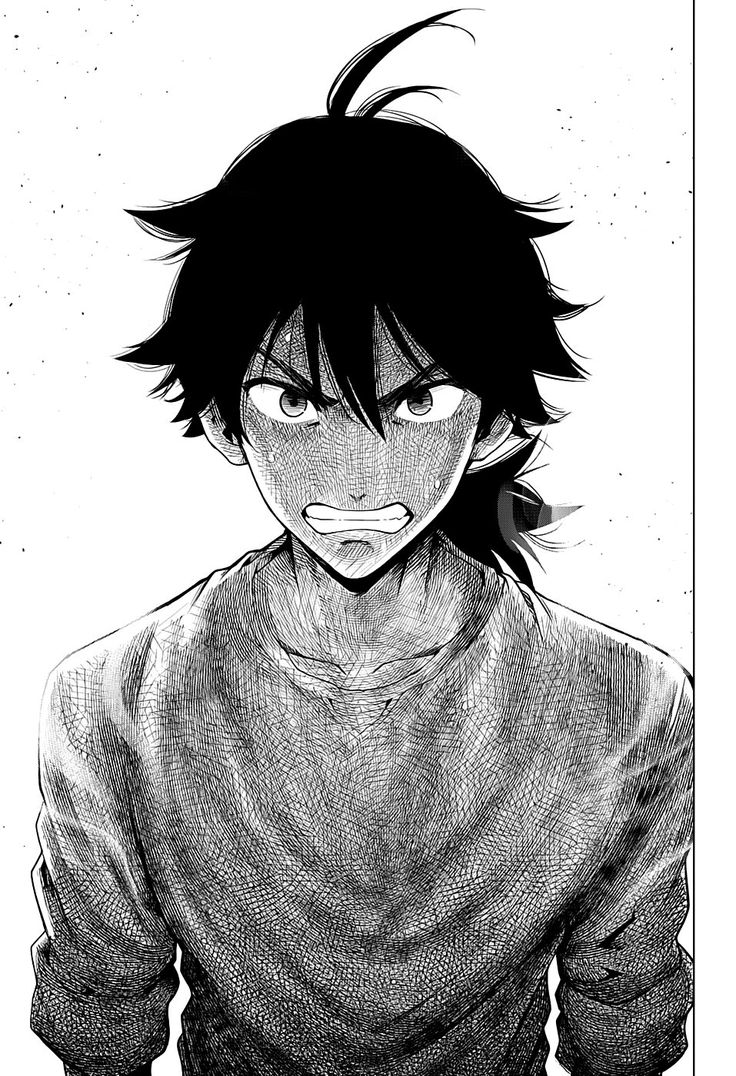 The manga paints us a picture of a person struggling with his passion in an unlikely situation. Despite the discouraging odds, Sasaki relentlessly pursues his passion no matter how much it takes from him. He’s broke, desperate, and completely alone, so it isn’t a surprise that when a strange gift falls on his laps he takes full advantage of it. While he eventually finds great success, he’s also plagued by the guilt that comes with it, especially while working with the very person whose work he unknowingly plagiarized.

Despite its eccentric elements, Time Paradox Ghostwriter is wholeheartedly a manga about making manga. While it casually showcases the processes involved in creating a manga and even getting it adapted into a TV anime, it, more importantly, refuses to hide the ugly truths of the industry as well. It objectively highlights how the industry is built on the foundation of passionate mangakas who sometimes let that passion be their undoing.

We see this chiefly through Sasaki’s actions in his painstaking process of trying to live up to the quality of the manga he usurped that is far beyond his level, always coming up short, which consequently further plunges him back into the process. And due to his conflicting righteousness and guilt, this constant cycle breaks him completely as he transforms from a starry-eyed passionate up-and-comer to a struggling guilt-ridden creator trying to live up to par with a work that isn’t his. 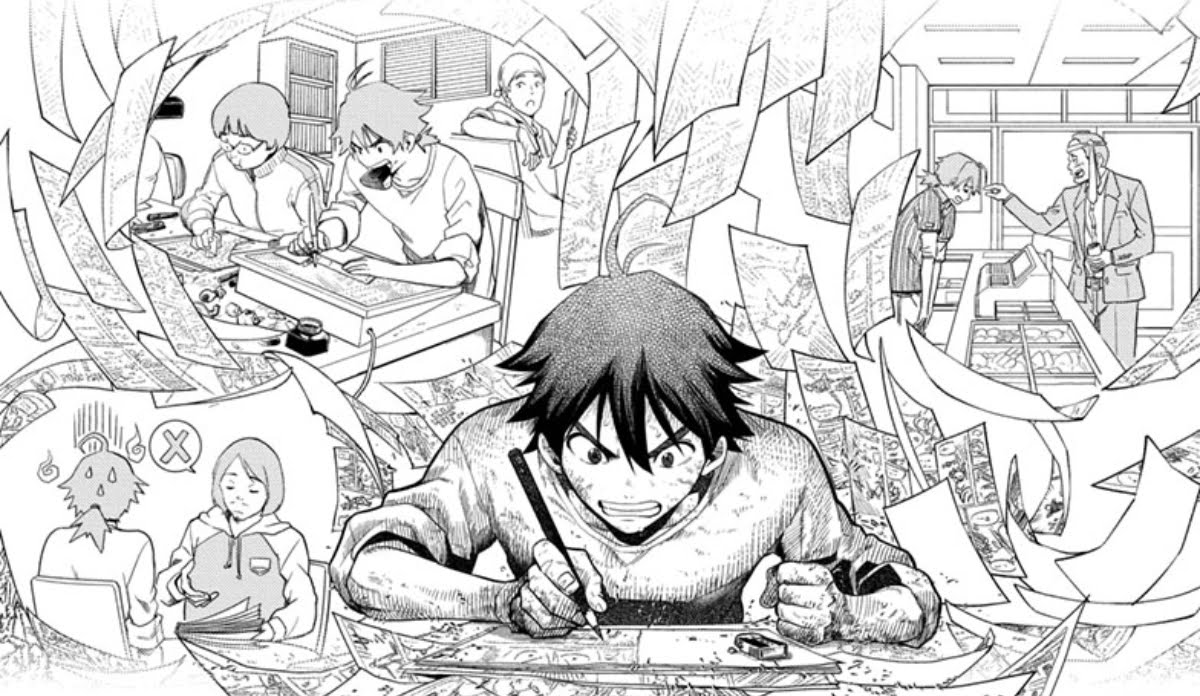 While the story is very much about the manga creators and their creation reminiscent of a manga like Bakuman, its time travel twist on the formula makes it that much more engaging as it is continuously fleshed out as the story progresses, not unlike Tatsuki Fujimoto’s Look Back, a more recent entry in the genre. This time travel element succeeds in raising the stakes while simultaneously providing a reason for its inclusion. However, I must point out that while the manga tries to keep things simple, it felt like it bit more than it could chew with the time travel element.

Some parts of the story are left unexplained, which leaves things leaning more towards the supernatural side contrasting its science fiction foundation. Of course id be remiss if Ididn’t mention the manga’s eventual and somewhat understandable cancellation from Shonen Jump due to its “uncomfortable” depiction of plagiarism, of which many readers were vocally displeased with. This is why most readers can tell how rushed the story was towards the last chapter and how jarring it felt overall to the story. 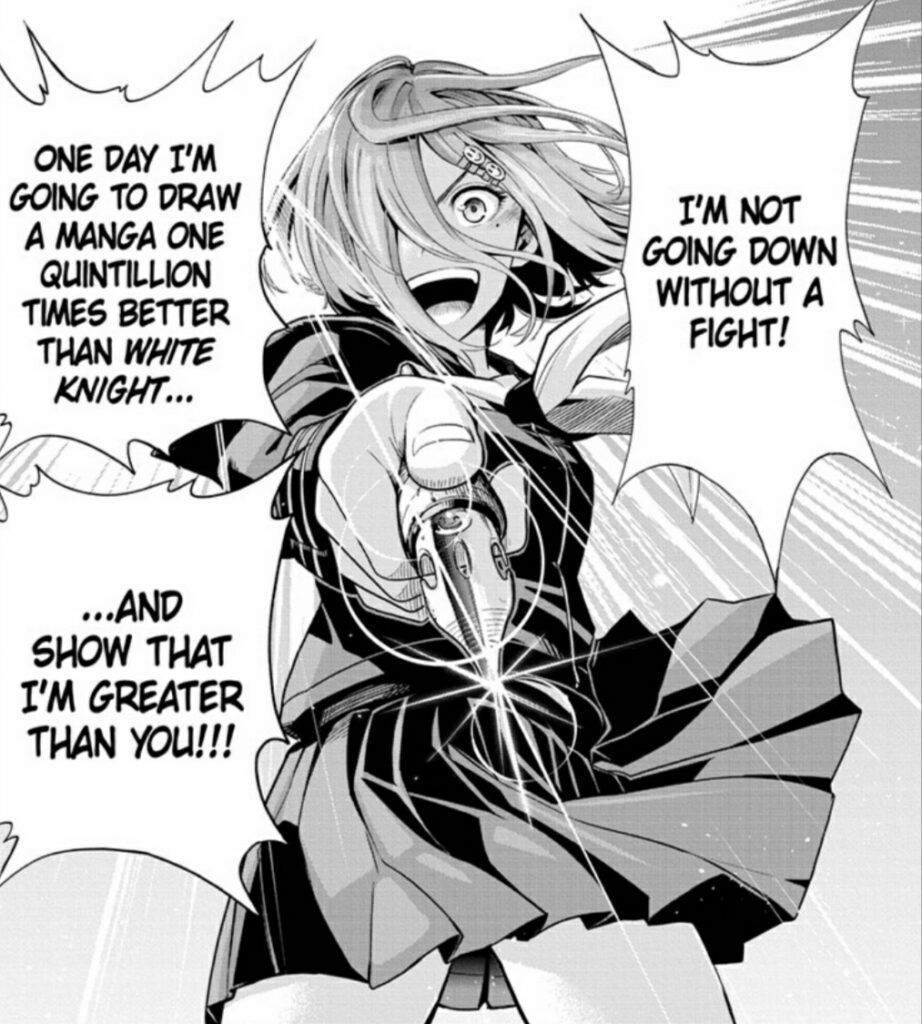 Overall, Time Paradox Ghostwriter truly surprised me by going beyond what I expected of it. Aside from boasting an engaging story with surprisingly relatable characters, it also explores how much passion can lead to one’s downfall and provides an interesting commentary on the Japanese manga industry, especially in the recent wake of Kentaro Miura’s death. So if you’re a fan of learning even a little bit about the manga industry while still being engaged and entertained, then I confidently recommend Time Paradox Ghostwriter.

Have you read Time Paradox Ghostwriter? Do you have thoughts on the manga industry? Let us know your thoughts in the comments section below.

Time Paradox Ghostwriter truly surprised me by going beyond what I expected of it. Aside from boasting an engaging story with surprisingly relatable characters, it also explores how much passion can lead to one's downfall and provides an interesting commentary on the Japanese manga industry.