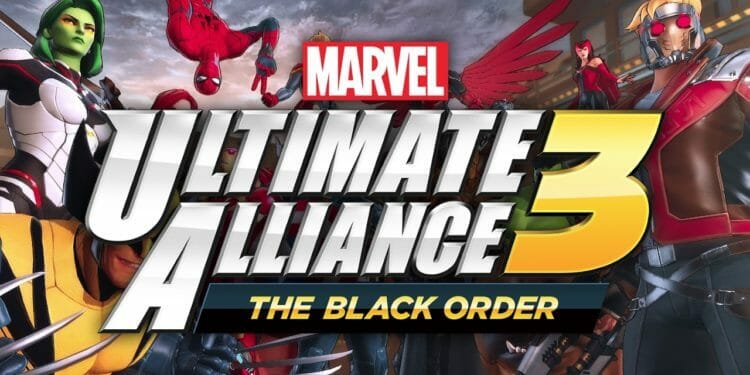 Marvel is ready to let us take on the role of our favorite hero to save the earth from the threat of Thanos in the Nintendo Switch exclusive, Marvel Ultimate Alliance 3: The Black Order. Among the protagonists of the new alliance as Scarlet Witch and the old guard as Iron-man, we also find characters seen outside the Avengers movies. We’re talking about heroes like Wolverine or TV series stars like Luke Cage. But how much fun will this story be? Let’s find out together with our review.

Marvel Ultimate Alliance 3 is one of those games where you have to be stronger than your opponent to escape. The game begins with the Guardians of the Galaxy discovering some valuable treasure. Their quest will lead them to meet their most bitter enemies, like Nebula, and to defend the 6 gems of infinity. Between one battle and another, Star-Lord manages to grab the gem of space but at that moment the other gems are dispersed in the universe. It will be the task of the Avengers and all the members of SHIELD being able to stop Thanos and recover all the infinity gems.

Not just superheroes but also anti-heroes. In fact, in the course of our adventure, we will meet several enemies to defeat who, in the end, will pass on our side. One of these is Venom, one of the unlockable characters in the first chapter of the game. We will then depart from the Star-Lord ship to pass through all the worlds we have come to know. Whatever place we visit, be it Asgard or Professor Xavier’s institute, our mantra will be: hit harder than our enemies! 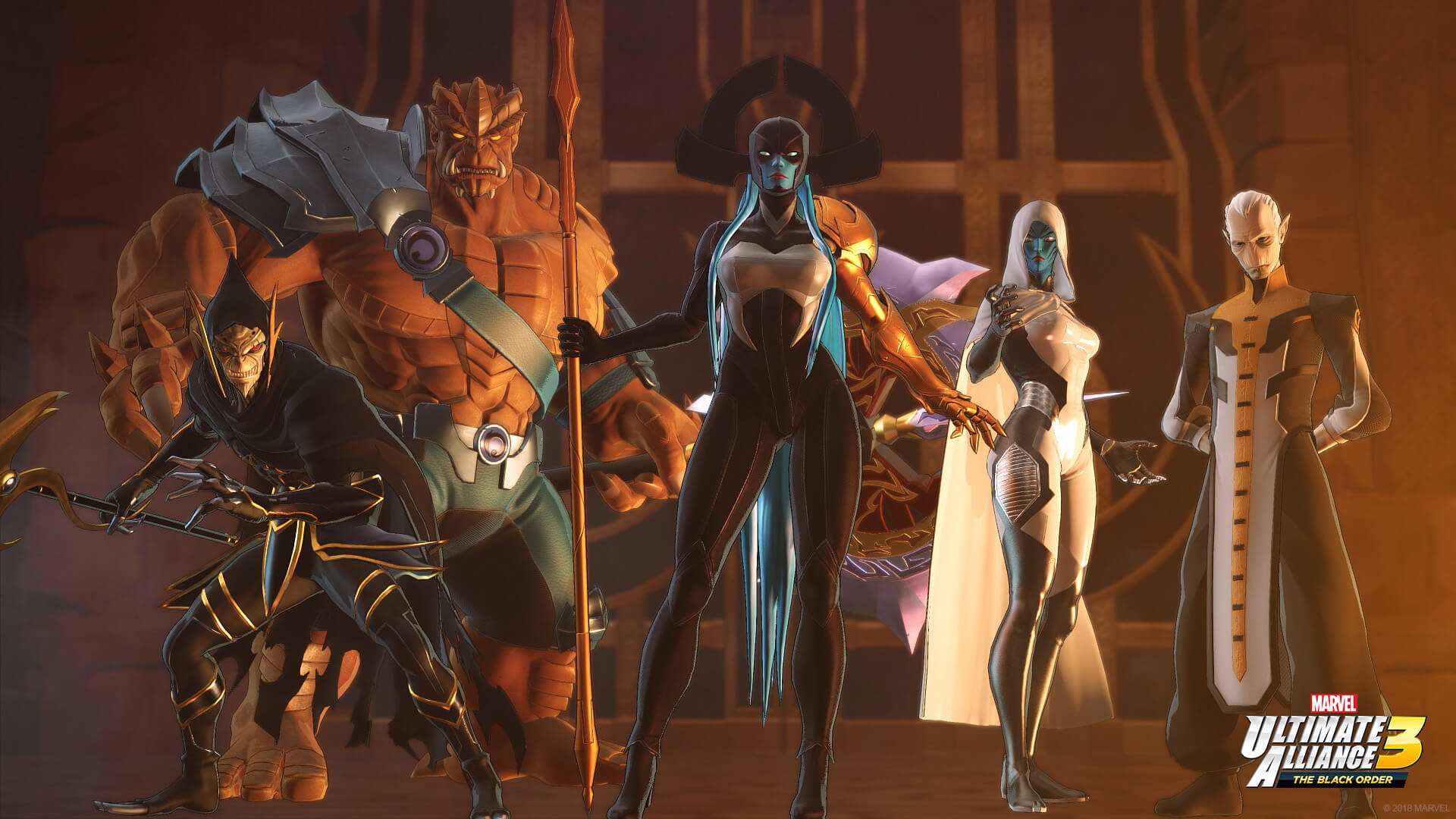 The team that will save the earth must be made up of 4 characters of our choice from the 36 available, which will increase with DLC. Each character will have their own characteristics that will be very important in choosing the team. One of these is belonging to a group. Each character can belong to different groups, for example, Spiderman belongs to different groups including the “brains” along with Iron man and many others. This means that entering Spidey and Iron man at the same time will bring us certain advantages. We could, for example, get a percentage of bonuses from 10% up in hardness, strength, mastery, and vitality.

Another RPG element of the game is the shield laboratory. This allows us to strengthen our alliance and manage ISO-8. To enhance our alliance we should use the upgrade points and the credits we get along our adventure. The laboratory offers us hexagons formed by many interconnected points that will increase the same characteristics of the team bonuses previously declared. The ISO-8, on the other hand, are objects that allow us to increase the characteristics of a single character without having to account for the characters in the team. The most powerful ISO-8s increase the character’s bonuses but can also lead to different malus in the various features.

Marvel Ultimate Alliance 3 allows you to play in local multiplayer or online. The local multiplayer allows to play up to 4 players both on the same console and on different consoles connected to each other. Online multiplayer allows you to play with people from all over the world. You can do this by creating or participating in a player’s session. Playing online you can access all the free rooms or create a room with the entry password to share with your friends. The negative note is the inability to play while waiting for other players to connect to the game. The session can start if all the players are not there, but once the players have left, they will no longer be able to connect. 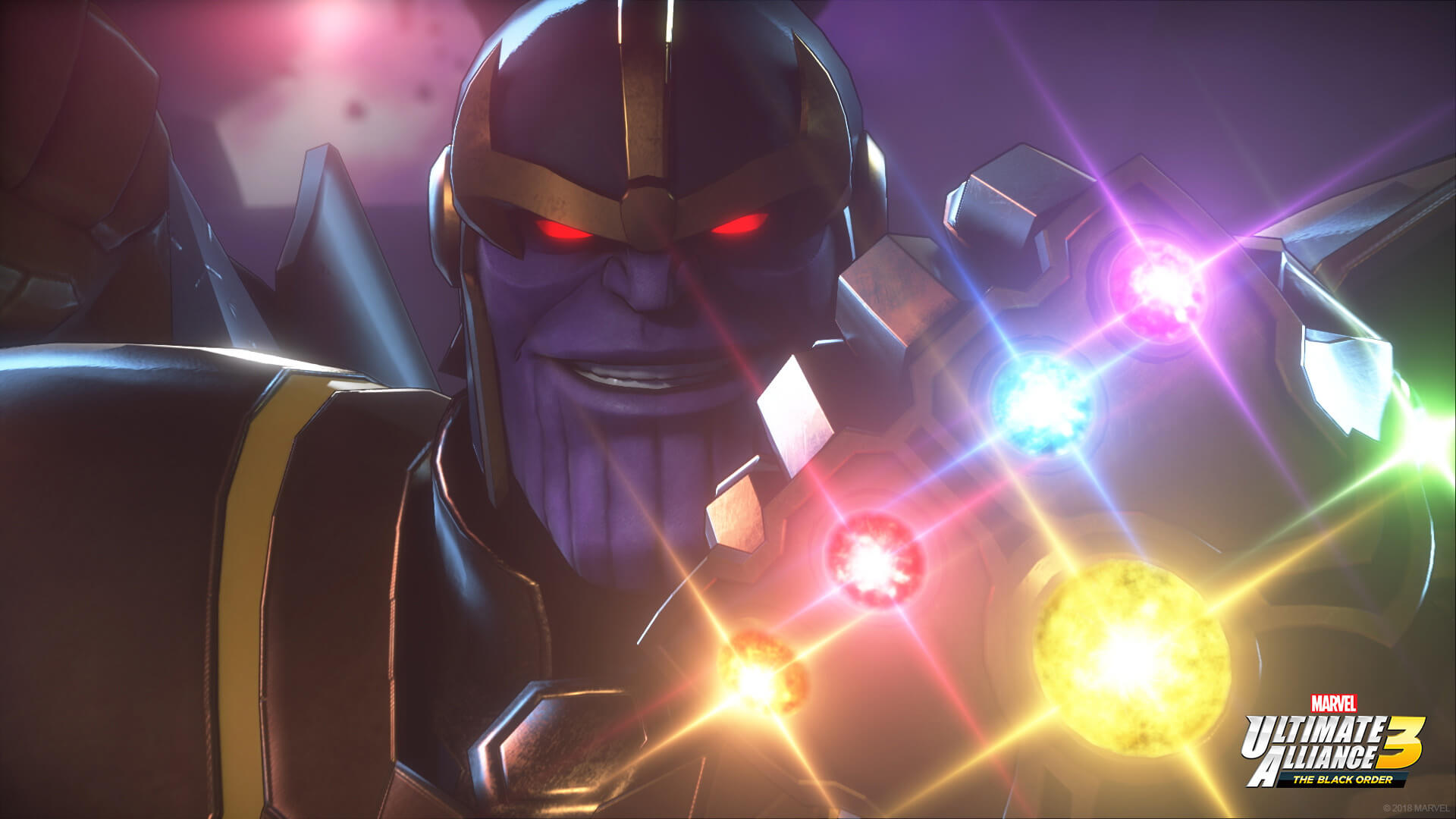 The importance of being able to play with a friend is high. The game allows the use of synergies. Each character has a maximum of 4 unlockable skills as levels progress. Each skill belongs to a category and different categories can be in synergy and then used together to form a combo. The combos are easy to make when playing with a friend, but complicated if you play alone. The use of characters by the CPU is fundamental and does not often allow the use of synergies. If we use a move, then it will be rarer for the CPU to accompany it with a combo.

Along our adventure, we will find some scraps in which we could enter. These are called Infinity and represent tests to be overcome. You are not obliged to enter it as they are not related to history. After the test, we will be awarded a score that will allow us to get from one to three stars. The goal is to get as many stars as possible to unlock certain prizes. At 16 stars we unlock the skin for Black Widow, at 32 stars Captain Marvel and 48 stars, Elektra.

It is possible to face the infinity trials online by creating or participating in a room. There may be a large number of synergies required to get one of the stars. The help of some characters controlled by other users could make this much more comfortable to achieve. 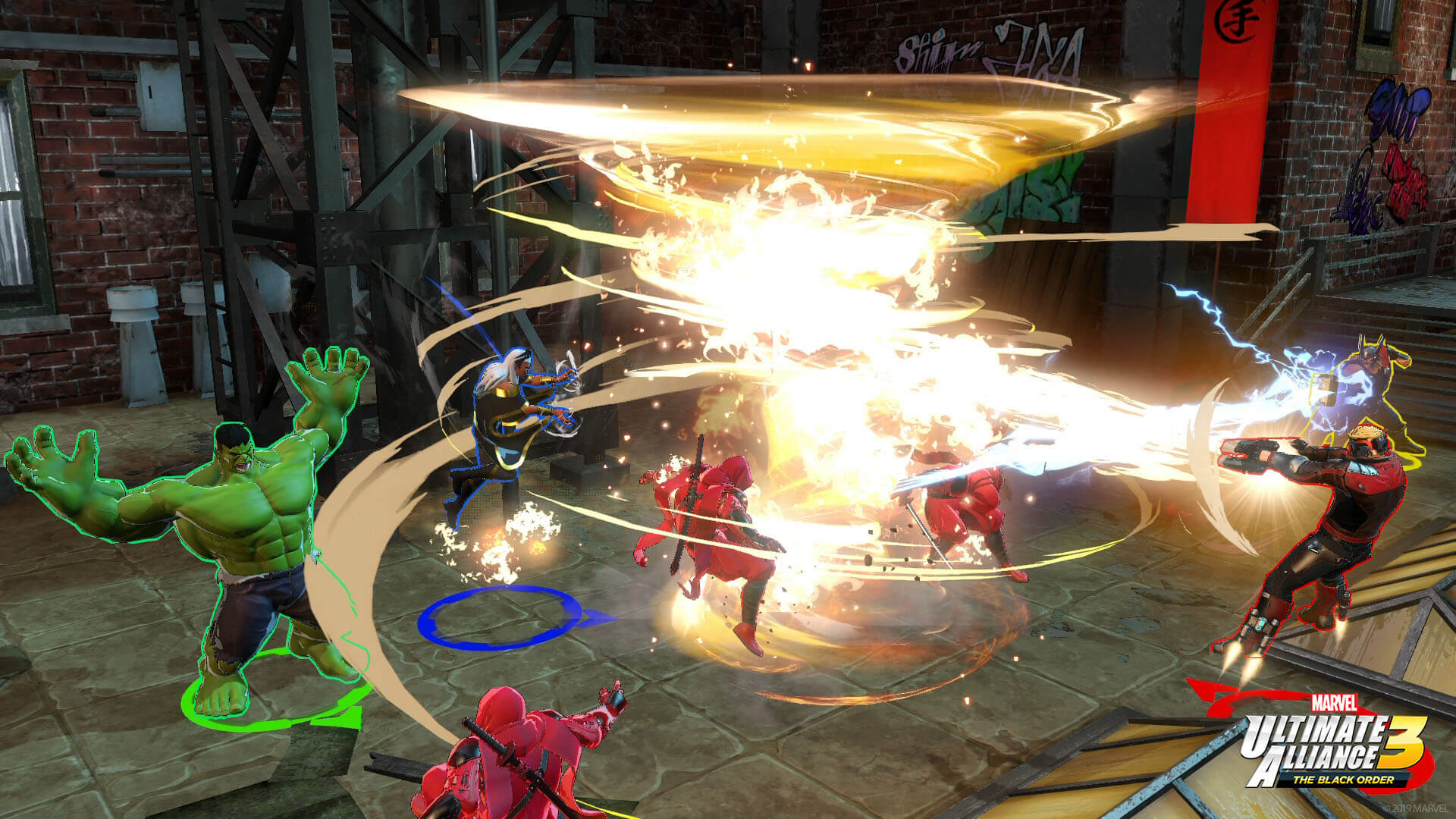 Marvel Ultimate Alliance 3 takes us into the Marvel universe along with many protagonists. The 36 selectable characters are many, but superhero fans will be delighted. The only flaw is the management of the levels of individual heroes. Each character will level up only if used. The flaw lies in the fact that, if we decided to introduce a character into our team after a while we unlocked it, this will be much lower than ours and that of the enemies. As a result, the character will be clearly at a disadvantage and will be almost useless against the bosses.

This obstacle is circumvented by XP cubes. They are cubes that we find around the map. We can use them on a hero to give them experience points. There are different measures based on the experience points that we want to assign starting from the small one up to the XXL one. The problem persists as the characters are many while the cubes certainly less. This means that we will have to level out some characters, doing old missions or re-doing the infinity tests, if we want to introduce them into our team. At this point, it would have been more interesting to choose a “Shield Gym”. A place where you can train some heroes and level them up automatically while you are playing.

Marvel superhero lovers will get the best out of the game, thanks to the portability of the switch. They will be able to play at any time of the day wherever they are. The game itself is in full KOEI TECMO GAME style. Four characters for a team and many beatings. This time, however, the game has a higher difficulty, enemies we have known thanks to TV series and cinema and above all a level of ingenuity that excites the player. 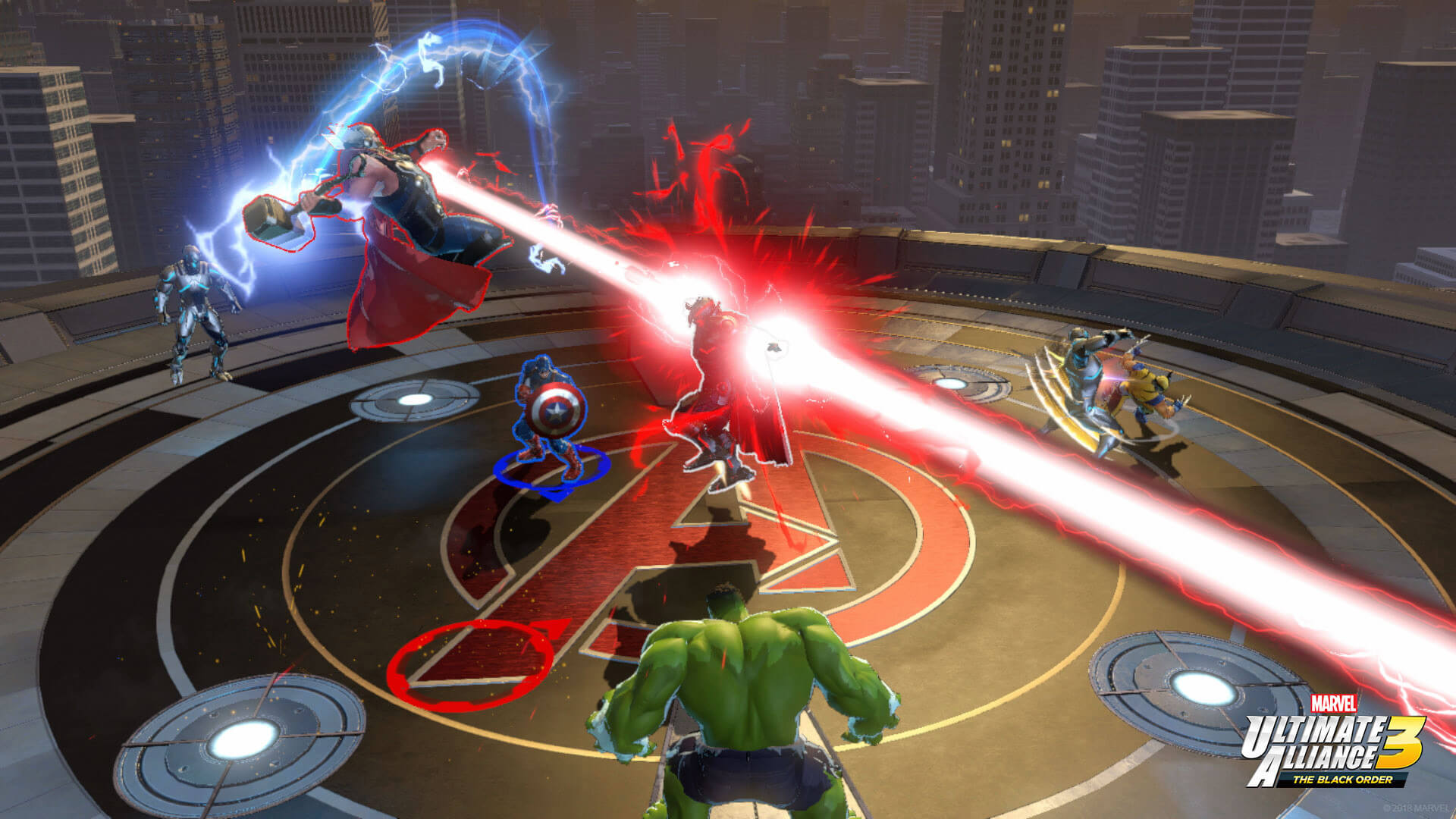 Furthermore, the game already has several DLCs in store. Thanks to the expansion pass that can be purchased for $19.99 we could get 3 DLCs. The first will be released on September 30th. It will be called “Marvel Knights: Curse of the Vampire” and will introduce an additional narrative story. This will also introduce characters like Blade, Moon Knight, Morbius, and Punisher. The other two packages, for which there is still no date, will refer to Fantastic Four and the X-men. Furthermore, thanks to the expansion pass, we could get a chef skin for Deadpool.

The last point to touch is the game’s graphics. Between the trailer and the release, the graphic choice of Marvel Ultimate Alliance 3 was highly criticized. Playing, both on TV and in handheld, the graphics are beyond all expectations. The mix that comes out of cartoon graphics and comics is excellent. The videos seem to take us inside a cartoon film, while the game scenes allow us to enjoy not too advanced graphics but that still follow the Marvel style. In short, it’s the graphics you expect for a video game based on comics. Precisely for this reason, those who expect characters resembling the actors who portray the hero on the big screen will be disappointed. While comic book lovers will find their heroes completely the same as their original designs.

Marvel Ultimate Alliance 3: The Black Order is clearly one of the exclusives of the year, which we warmly recommend to any fan of Marvel characters, whether for the film world or the comics or even for beat'em enthusiasts. The game has large content that goes well beyond its story mode and offers a real challenge for players at times. This game will know how to take care of you for very long hours and that is a certainty.

Metal Slug 4 – Does the Game Best Its Predecessors?