Mid-Season Impressions: To Your Eternity

Our Episode 1-6 Impressions on To Your Eternity

Much like Vivy, it’s hard to believe I initially had no intent on checking out To Your Eternity. However after watching it, I now have to admit that the anime objectively has the best premiere this entire season.

To Your Eternity’s story begins with a lack of provocation as a simple alien-like orb is thrown into Earth which quickly shapeshifts into a rock. A few months later, a wolf dies next to the rock, and as if to honor the wolf, the orb takes its form and evolves. The wolf then meets a lonely boy; its owner who’s the last of his tribe. A few days pass, and the boy, alongside his wolf, venture into the great and frigid unknown to find “paradise” where he believes his tribe left him for.

Sadly, the boy is injured during the journey and eventually succumbs to his wounds cold and alone. Not completely alone however, as the wolf witnessed his friend’s death, and again, to honor the boy’s death, he repeats the process and takes his form. He then ventures back to the frigid wasteland to accomplish what the boy could not. 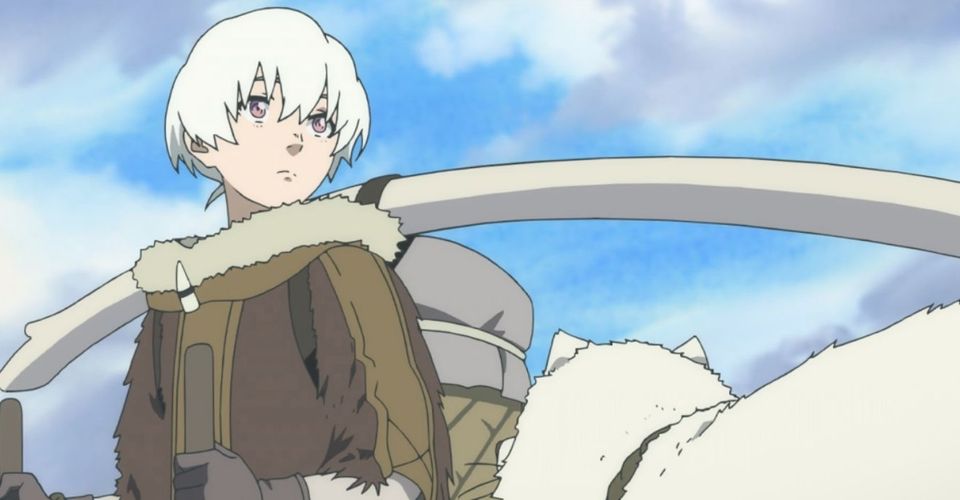 A Solid Set Up To an Emotional Tale

Judging by the first episode alone, it’s quite clear that like Vivy, the anime seeks to destroy the viewer by evoking as much emotion from them as possible. It familiarizes us with the lonely boy and his tragic journey and forces us to care for the cheerful and optimistic character who many would believe things would turn around for. Then shortly after, it presents us with the reality of the situation in the most realistic way possible, assuring us not every tragic story has a happy ending, which I absolutely loved.

The first episode also does an excellent job of making it clear that this isn’t your average fantasy anime. That is until the second episode titled “The Rambunctious Girl,” where the abilities of this peculiar being are fully highlighted. At the start of the episode, we’re informed by the mysterious narrator that the orb is immortal after having died in a variety of gory and unpleasant ways during its journey. While the alien aimlessly walks the world in search of “stimulation”, the anime takes a step back to finally attempt proper world-building by introducing viewers to Ninannah, one of the many villages in this world.

Ninannah is not a developed settlement by any means as their numbers are scarce, their technology is basically nonexistent, and their people are made up of mainly warriors and hunters. However, among the residents of this seemingly bland village is a little girl named March, a gleeful and rambunctious child who aims to one day grow up to be a loving mother. Then there’s Parona, a lonesome older girl who aims to be a warrior despite her mediocre archery skills. Parona serves as a sister figure to March and takes care of her while her parents are away. 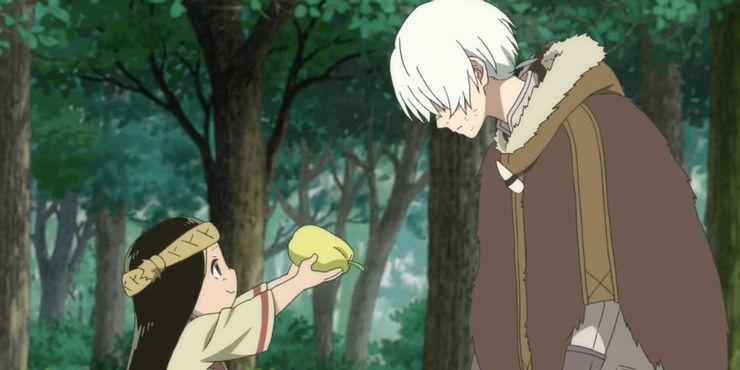 As I mentioned earlier, Ninannah is far from a developed village, and as a testament to this, a common and long running tradition is to sacrifice an “untarnished” young girl to a demonic yet still oddly worship being called Oniguma, who just so happens to be an overgrown white bear. Unfortunately, March drew the short straw and was chosen to be its next victim.

However, unsurprisingly not wanting to be bear food, March escapes her “responsibility” and captors, a group of warriors from the village of Yanome (who are oddly heavily invested in the dealings of Ninannah) with a bit of help from Parona. On the run, she eventually comes across the dismembered and then reanimated corpse of none other than our favorite homunculus. This event serves as a catalyst for the arc as not only does March and the orb form a strong bond as major dramatic events unfold, but we also learn a lot about the anime’s world and its characters through these dramatic moments. The orb is also able to grow and learn significantly as it carries the burden of these experiences with it moving forward.

Masahiko Murata (director of To Your Eternity) did a fantastic job of making the viewers aware that the anime is ultimately a gritty tale of despair, fleeting joy, innocence, and, oddly enough, hope. It’s also interesting to watch the orb learning about humanity in the most genuine and unfeigned way possible in all its highs and lows.

While the anime’s animation is nothing to scoff at, its direction further cements its depressing tones. Murata masterfully and fluidly executes each scene with the unusual ability to make you smile in one scene and wail in another. The voice acting is also done incredibly well, especially from Rie Hikisaka, who does a lovely job of voicing the rambunctious March. And finally, the anime’s opening, “PINK BLOOD” by Hikaru Utada, was an enchanting start to each episode, so much so that I couldn’t skip it no matter how much of a rush I was in.

In conclusion, To Your Eternity is an anime I initially didn’t expect to enjoy but is now an anime I’m glad I started. Its impactful scenes will shock and astound you in all the right ways, which is why I can’t wait to see how it progresses.

To Your Eternity is available to stream now on Crunchyroll

Have you seen To Your Eternity? What do you think of this review? Let us know your thoughts in the comments section below.