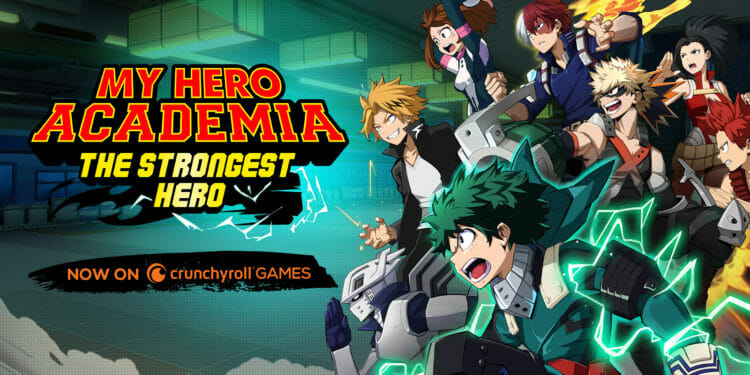 Crunchyroll recently announced that the mobile game My Hero Academia: The Strongest Hero, will now be published by Crunchyroll Games. The game, which features Midoriya and his friends from Class 1-A. The mobile game launched in 2021 with more than 12 million downloads in less than a year. The game was previously published by Sony Pictures Television in the US.

Terry Li, General Manager of Crunchyroll Games had this to say about the news:

“My Hero Academia: The Strongest Hero has found the perfect home at Crunchyroll Games with our focus on delivering rich anime experiences to fans. We have a lot in store for players this year, so stay tuned for even more Plus Ultra action!”

Crunchyroll states that Crunchyroll Games can explore even more gaming opportunities to leverage and maximize more anime IP than ever before thanks to its merge with Funimation. Under Li, Crunchyroll has launched a full-service AAA game publishing, editorial and production division, onboarding veterans from Sony Pictures Entertainment, Riot Games, Activision, and Disney Entertainment.

Based on the anime series, My Hero Academia: The Strongest Hero immerses players into the world of Midoriya, Bakugo, and Todoroki, alongside pro heroes like All Might and Endeavor as players select their hero teams, explore the city and take down villains in a quest to become the strongest hero.

To celebrate the game under the Crunchyroll Games banner, fans can enjoy several in-game celebrations:

Players can also take advantage of these events ahead of the big one-year anniversary celebration this spring, which will include tons of new events, login bonuses, giveaways, and character releases.

My Hero Academia: The Strongest Hero is available to players in English across North America, Latin America, the United Kingdom, Ireland, Australia, New Zealand, South Africa, the Caribbean, and Scandinavia. Fans can download the game now by visiting https://got.cr/mhaprtsh_cr.

My Hero Academia is the smash-hit anime series based on the manga by Kohei Horikoshi. The series is animated by bones inc. and the full catalog is available now on Crunchyroll. The game is available on iOS and Android.

Are you a MHA fan? What do you think of this mobile game? Let us know your thoughts in the comments section below.