Jessica Kings is an artist in training, and a very good friend of mine, who enjoys to put the worlds and stories crafted in her mind on paper, in the form of a manga. Her work is quickly growing in popularity over on http://comicfury.com/ and so I thought I would showcase her work and grab her for an interview. She also develops games, draws for people and draws in all kinds of different styles from pixel art to digital masterpieces. This is the cover of her current manga: Seraphim. 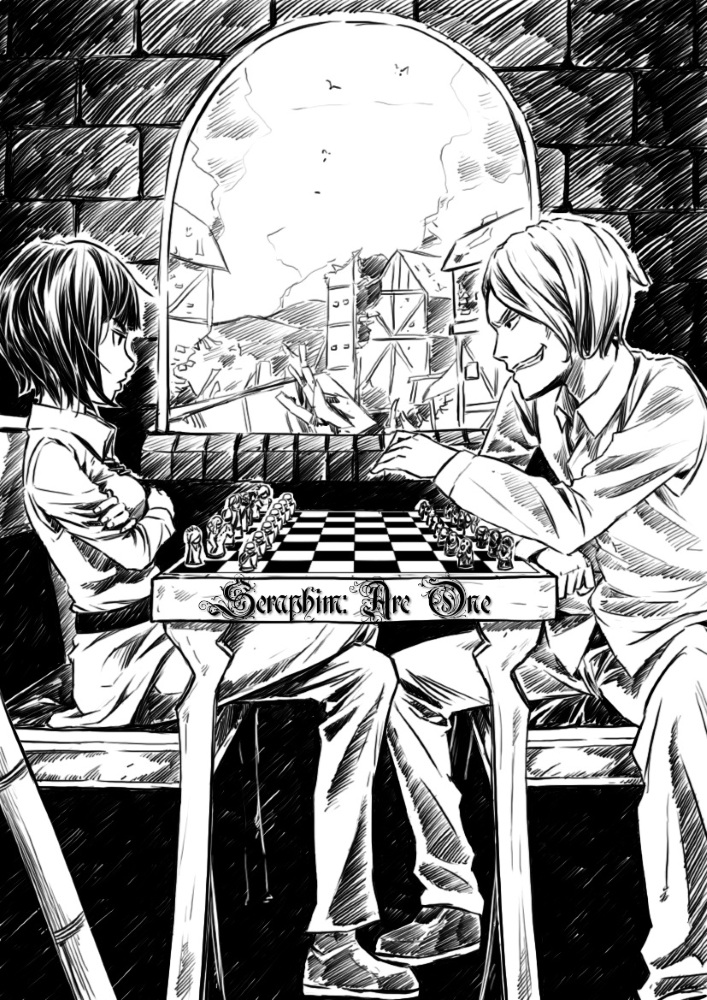 You can check out, rate and subscribe to Seraphim over at theseraphim.thecomicseries.com which gets updated three times a week.

If you want to support Jessie as she doesn’t have a lot of time to do what she does you can go to www.patreon.com/JessieK where the higher the pledge you make you can get an awesome personalised reward!

And you can keep up with her wit by following her on Twitter at twitter.com/JessieKingsK.

To learn more about Jessie and her manga Seraphim, I present our interview.

Hello Jessie how are you?

I’m grand thanks for asking and yourself?

I’m great and that’s fantastic to hear! I’ve seen lots of examples of your work and I have to say I really enjoy your art and I believe you are very talented. When did you first start getting into art and think that this is what you want to do?

Well thank you very much! It’s always very nice to hear comments like that, I started drawing just casually for a couple of minutes a day when I was very young like 7 – 8 and it was probably around 10 or 11 when I really started spending long periods of time just doodling in books. I think I decided art is what I wanted to do when I was about 14. I was being pushed in school to go towards things like history and geography for my options which meant I couldn’t take art as a subject and I found myself getting very upset at the notion of not being able to do it or study it any further in school, which is when I got the push I needed from my family to really follow what I wanted to do, mainly because I was completely useless at a subject if I didn’t really want to be there as I think most people are at that age. I think once I got my highest grade in school in art as a subject, I was like “Yeah I can do this this is something I can do well”.

Aww that’s great to hear that your family help you pursue it! And the outcome is so far looking very promising, I know you are currently at Uni but you also have projects going on including your newest comic/manga Seraphim, can you tell me a bit about that and how it started?

Of course. So Seraphim is based in a medieval fantasy world, where humanity is in a constant battle to be at the top of the food chain with a species called the “Drey”; huge 8ft creatures who are kind of a mix between a bear and a gorilla but primarily hunt and eat humans. The story follows a girl called Lilith as she joins the military group who are given the job of controlling the Drey population called the Seraphim. The idea came about when I took a long look at my previous project Cursed and realised I wasn’t happy with the direction it was taking, it was too loose with it’s story and too focused on moving characters from one action scene to the other without really setting anything up. It also had horrible writing issues after I re-wrote the thing 4 – 5 times and had notes and documents all over the place, so I contacted a friend of mine James Roughton to help me come up with a new concept for a story where I could adapt the art style I had already been using for Cursed to create a darker more story/character focused Manga without missing out on the action scenes that I personally enjoy creating.

Wow sounds like a lot of work has gone into it, and I have to say so far it’s rather good, with already some dark even shocking panels that make me want to read more haha. Is there anything that inspired Seraphim or in turn inspired Cursed which is now why you have created Seraphim?

I really enjoy dark/more serious anime and manga, off the top of my head I would say I was heavily inspired by shows like Attack On Titan and Claymore when creating Cursed which as you said inspired the creation of Seraphim. I think my main inspiration was to avoid the Anime/Manga cliches that pop up all too often and try to use the style to create more realistic looking settings and characters like the two mentioned shows did.

Ah some fantastic mangas to inspire you! What would you say to anyone who hasn’t read or seen those or your manga to entice them into getting onboard with yours then?

If you’re interested in seeing stories that deviate from the norm when it comes to setting and are unpredictable like Game of Thrones where no characters have plot immunity, but with a faster moving plot with more action heavy set pieces that add real tension as you have no idea who might die, I would highly recommend checking out the shows I listed above and my own manga, it’s an interesting change of pace that I don’t think we have quite got the hang of in the west yet.

Now that’s a clincher! I wish you the best of luck with Seraphim and look forward to reading more of it. Before we finish is there any other projects or things you would like to inform the readers of?

Well right now I am working on a few projects like a turn based collectible game and working on the design side of an upcoming FPS but none of those projects are at a stage where I can discuss them in great detail, I’d love to be back to chat about them when they are though. Other than that I hope anyone who checks out my Manga enjoys what they read, it updates twice a week right now and I hope to be able to update much more often in the future, if you happen to enjoy Seraphim and you really want to help support its production I have a Patreon page at https://www.patreon.com/jessieK. Everything raised there goes right back into making Seraphim the best it can be and the more money raised the more content I can produce.

Sounds like a lot of work! I sure hope you get all the support you deserve, and of course we’ll be happy to talk to you again in the future. Thank you for taking the time to talk to us Jessie 🙂

And thank you for having me on.

Get 5 Free Japanese Tracks In DriveClub