Nvidia Receives a Class Action Lawsuit over the GTX 970

For the people that bought a GTX 970 know about the “Memory Allocation” issue. It has been quite disappointing to see Nvidia not caring about resolving the issue at hand, but simply deflecting it instead, which begs the question: Does Nvidia actually care about the issue, and will they help their customers by providing a solution? Probably not.

Anyone that wants to find out more about the GTX 970 Memory Allocation issue read all about it here.

Nvidia couldn’t have just recalled all of the GTX 970’s could they? Well, yes and no. There would still be people with GTX 970’s who like the card, or people that are unaware and would still stay unaware that there was even an issue to begin with, so it seems Nvidia wants to keep the GPU on the market.

Personally I think this is a huge issue for current owners, future consumers, and Nvidia as a whole. Essentially Nvidia should have stated outright that the GPU has 4GB of VRAM, but 500MB of the total usable VRAM is slower than the other 3.5GB. Now if this was the case, you could still see people asking why on Earth they would have 4GB and cut the performance back 500MB. It doesn’t make sense, and it shouldn’t have happened in the first place. Why not just have a normal 4GB GPU instead of this jacked down (500MB) memory which is rendered useless in practice?

According to the PCWorld article writer, Nvidia claims to have responded to the Memory Allocation issue (without linking the source) with the following.

“Responding to the issue last month, Nvidia acknowledged that the GTX 970 uses a different memory subsystem design than its higher-end GTX 980, but it said that difference has a negligible impact on performance.” – Claims PC World Writer – James Niccolai

Several sources have found that the original specifications provided by Nvidia were incorrect from day one. More information on this topic can be found in the source section of my previous GTX 970 article. 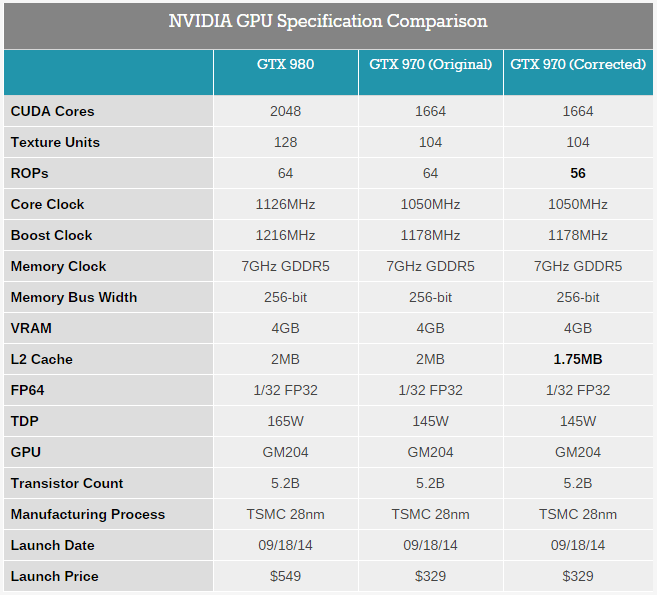 One person decided that Nvidia’s lack of interest in fixing or at least resolving the issue was a step too far, so they sued Nvidia with a class action law-suit.

The following is from the Class Action Lawsuit documentation itself.

“Nature of the action

4. This is a nationwide class action brought on behalf of all consumers who purchased graphics or video card devices incorporating the Nvidia GeForce GTX 970 graphics processing units(“GPU”) (hereinafter “GTX 970” or “GTX 970 devices”), which were sold based on the misleading representation that the GTX 970 operates with a full 4GB of VRAM at GDDR5 (not a less performant 3.5 GB with a less performant and decoupled .5 GB spillover), 64 ROPs (as opposed to 56 ROPs), and an L2 cache capacity of 2048KB (as opposed to 1792 KB), or omitted material facts to the contrary.”

“5. The Defendants engaged in a scheme to mislead consumers nationwide about the characteristics, qualities and benefits of the GTX 970 by stating that the GTX 970 provides a true 4GB of VRAM, 64 ROPs, and 2048 KB of L2 cache capacity, when in fact it does not. Defendants’ marketing of the GTX 970 was intended to and did create the perception among purchasers that the product was, in fact, able to conform with the specifications as advertised. This deception has already resulted in a petition of over 8,100 purchasers who have requested that the FTC take action against Nvidia and asking for full refunds.”

As an owner of a GTX 970, I feel betrayed by Nvidia, so I would prefer to have a full refund of the product, as under Australian Consumer Law if the item is not as described or performs as described, the owner even without a receipt is entitled to a full refund (weird I know).

So I might just get one anyway, but for others that do not have this loop hole in their legal retail system, you may have to hold out. I will update this article with further information in regards to if I was actually able to get a refund at all.

If you had the option for a refund, would you take the refund or keep the GPU?

Condemned 3 Development Could Be Outsourced to an Indie Studio