A wonderful take on an oversaturated genre. 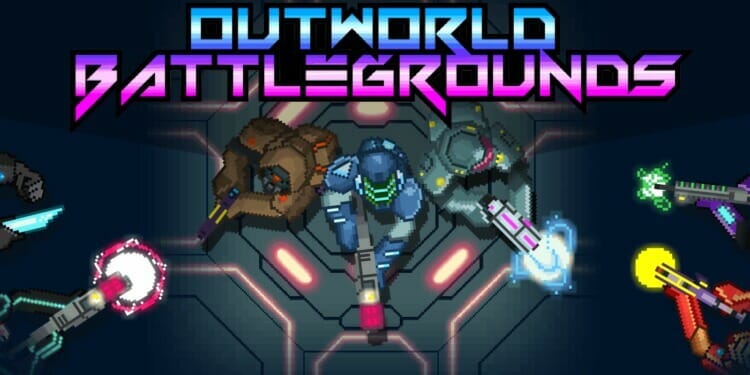 Outworld Battlegrounds has no story. This is not new for battle royale games, however, the game has a unique setting and gameplay mechanics that need context. This is especially true for the ‘toxic field,’ which players have to avoid while ensuring they are the victor or runner-up. There is no explicit information given concerning the field and how it factors into the in-game world, this is without a doubt a shortcoming for the game.

Outworld Battlegrounds gameplay is quite refreshing, given it succeeds where other battle royale games fail. This is due to the game having a fresh take on battle royale, with three match types (solo, duo, and team), coupled with a small player size makes matches fast-paced and exciting. However, location selection undermines the pacing of the game as a player could go an entire match without encountering another player (or bot), the sprint mechanic is merely decorative since it is not entirely functional, and the ‘toxic field at times can trap players in areas leaving them without purpose. 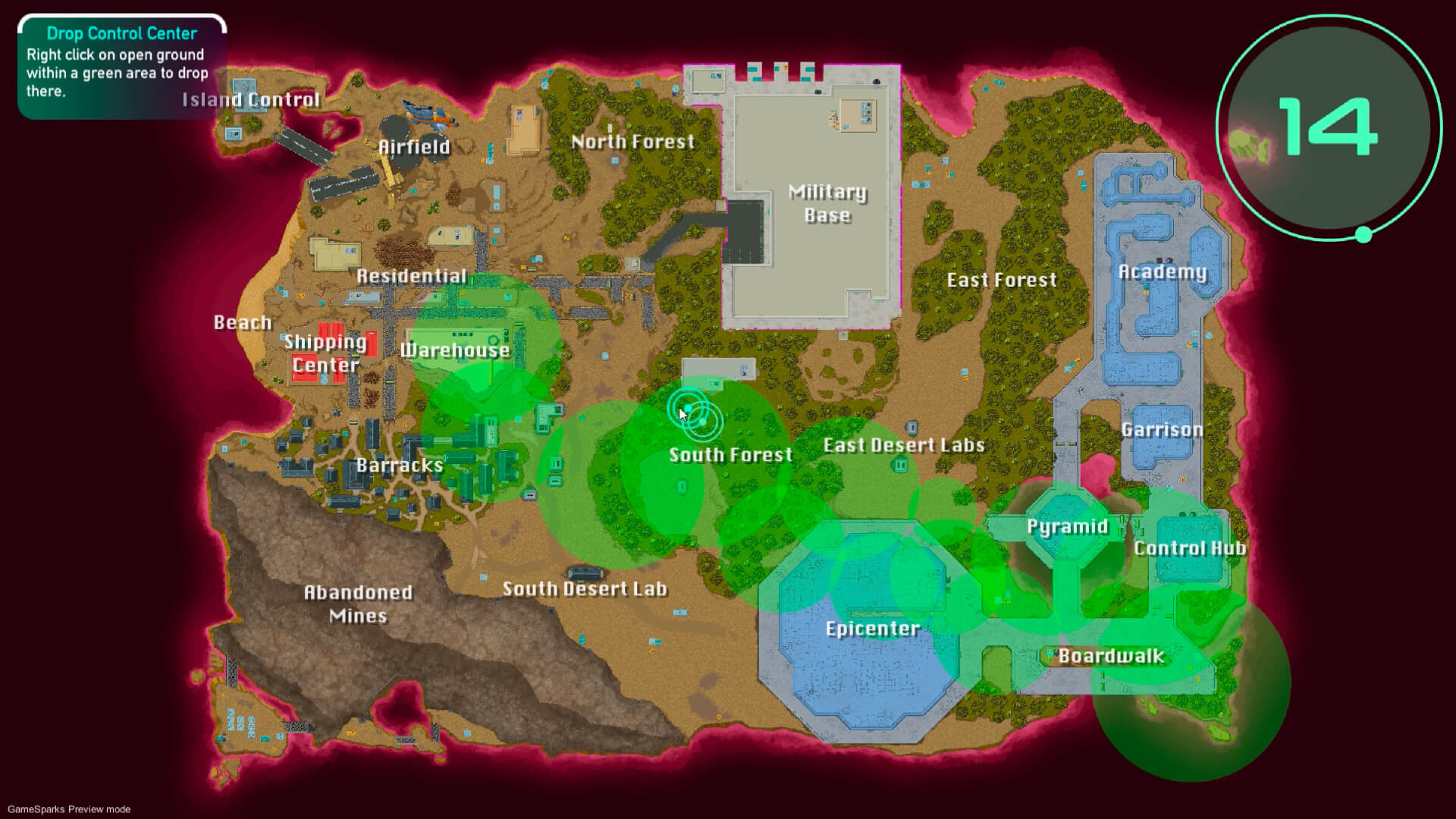 Outworld Battlegrounds offers no formal tutorial. Upon starting the game for the first time and beginning their first match, players will receive helpful ques on screen. These usually correlate with what is happening on the screen, for example, if the player acquired a gun, ran out of ammunition yet had a cartridge then a small message would appear on the screen instructing then to them with the reload button, as the game is playable with either keyboard and mouse or controller.

Outworld Battlegrounds is a 2D top-down battle royale shooter. Although this combination appears to worrisome that is not the case. Thanks to the game’s unique visual system, weapons, and survival mechanics. First, the visual representation of the system is cone-shaped, meaning the player’s field of vision is wherever the cone lights up the area it covers. Also, the cone will split at times if the environment is conflicting with visible areas and the vision system even allows players to see through windows. Second, weapons in Outworld Battlegrounds exist within two categories knives and guns. Upon beginning matches, players start with a simple knife, however, through exploration they can acquire guns. One would assume this guarantees victory but each of the game’s guns has a steep learning curve when it comes to effectively using them. Final, survival mechanics are the bread and butter of Outworld Battlegrounds. Its visual system due to its limited range forces players to stay on their toes. Though this is only part of it, as there is barely any background, thus players are aware of their surroundings as one can hear their footsteps and gunfire. Also, players can hide in bushes or buildings with one-way windows for strategic take-downs (kills). 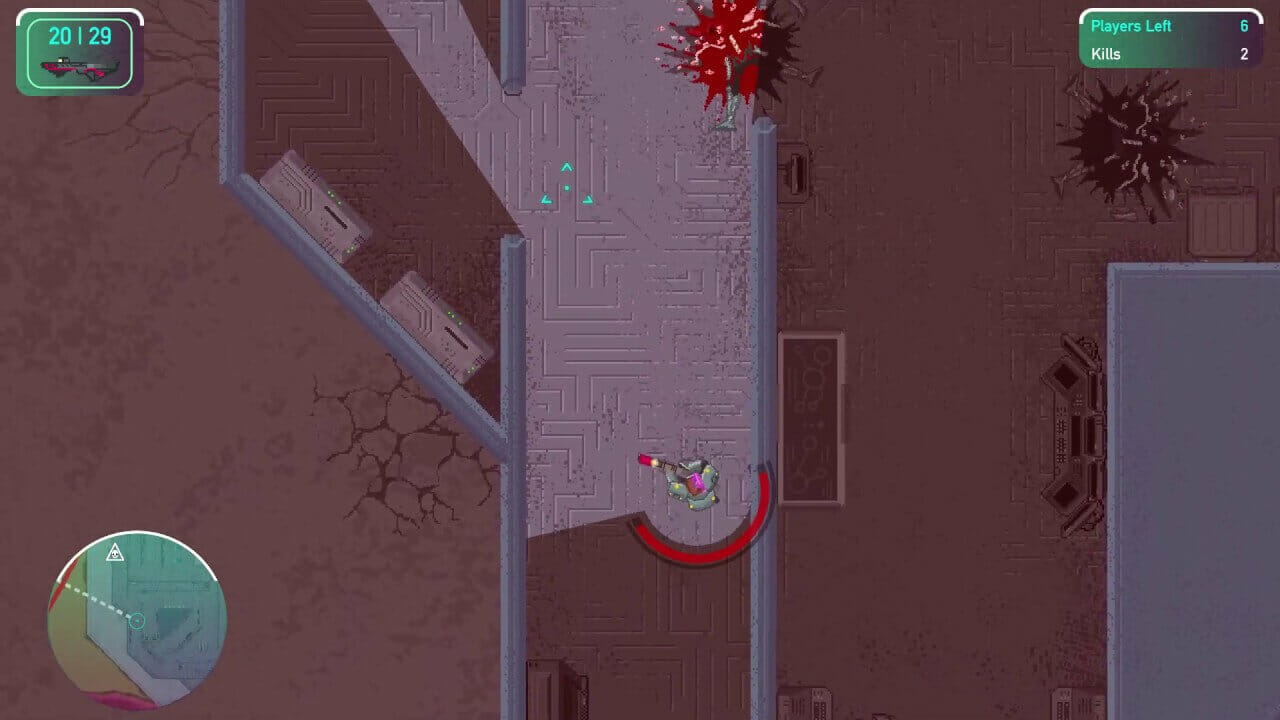 Outworld Battlegrounds rewards players with credits upon the completion of matches, whether players win, loss, or even manage a single kill. This credit provides players with the chance to buy cosmetics, from the store, for their character. Also, players have the option to select parts (head, arms, and more) inside of whole “skins”, thus players can mix and match parts available in their inventory. nets you credits that you can spend on cosmetics for your character in the store. It is worth noting that all items are not purchasable with crystals – others require crystals that involve real-world purchases. 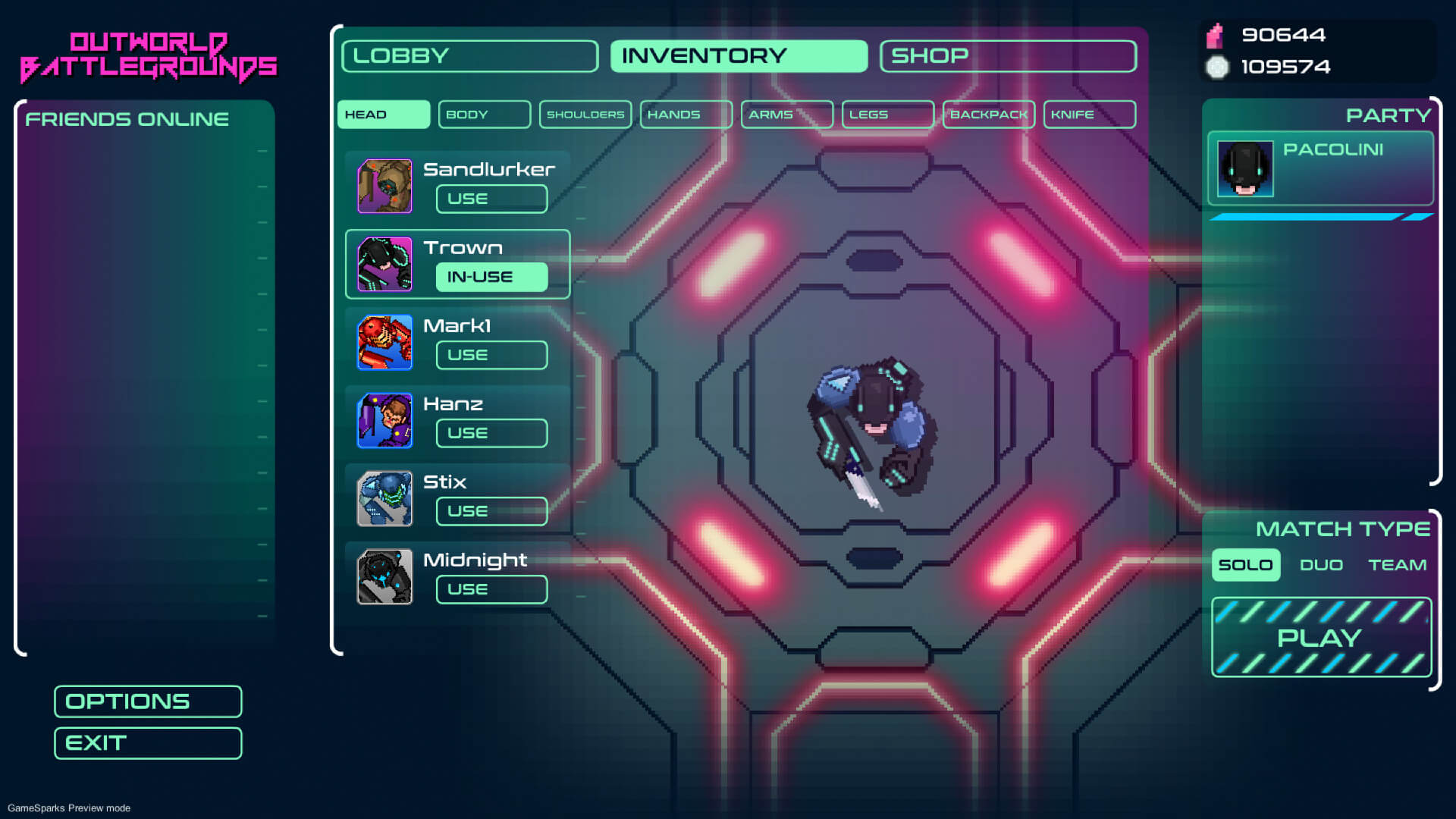 Outworld Battlegrounds graphics and audio differ from the majority of battle royales. The game has delightful pixel graphics and the top-down view gives it a wonderfully retro vibe, which makes seeing a splattered corpse all the more satisfying. Unfortunately (or fortunately), the game is not huge on soundtrack aside from the game hub. However, this is understandable, given that Outworld Battlegrounds perfects the suspense necessary for battle royales by forcing players to rely on the sounds of their character’s footsteps and the surroundings.

Outworld Battlegrounds does not stray too far from its inspirations (PUBG). This allows it to give players a quick fix for their battle royale obsessions outside of Fortnite and others of its ilk. Furthermore, as with all games like this, a decent-sized player base is necessary, however, whether it be actual players or bots it does not lessen the satisfaction of getting a “winner winner space-chicken dinner.” Thus, Outworld Battlegrounds is worth trying out even for a little while. Outworld Battlegrounds is out now on PC from the Steam marketplace.

This review is based on a review key provided by the developer.

Outworld Battlegrounds does not stray too far from its inspirations (PUBG). This allows it to give players a quick fix for their battle royale obsessions outside of Fortnite and others of its ilk.

Can Steam money be converted to real money?

SIMULACRA 2 is coming to PC, iOS, and Android.