When I was a kid I did not read a whole lot of Paddington. I checked some of the books out later, as curiosity got the best of me when I heard people talking about the friendly bear and his misadventures. The 2014 movie went under my radar completely, however, until my editor gave me the task of reviewing Paddington: Adventures in London for the Nintendo 3DS, a game based on said motion picture. Is the game a good fit for Paddington fans?

When Paddington: Adventures in London starts, the Browns have just decided to make Paddington part of the family on one condition: Paddington has to prove that he is a polite bear and to do this, he must help people all around London. These tasks can be anything from finding certain objects around the different areas of the city, to making marmalade, to chasing away pigeons. To do this, the player has to navigate Paddington through different areas in a 2D scrolling London, using only the stylus. A simple tap to the left or right on the touchscreen makes Paddington walk in that direction, while a double tap makes him run. There are no button presses whatsoever so it should be easy for anyone, no matter the age, to learn how to make Paddington move around.

At first, it is fun to run around London and solving minigames as Paddington; The minigames are easy to learn and are also controlled using only the stylus. When I had beaten all minigames in the first area, I leveled up my politeness rank and unlocked a new one. This is when the horror of repetition started — Every area in the game looks and feels almost the same. There are a few new minigames at first but sooner than later, harder versions of the old minigames are used instead of giving the player new challenges to undertake. The same characters that you meet at the beginning of the game repeat throughout as well, so there isn’t much variation.

All of the minigames are of “flash game” quality but with Paddington themes. Most of them are very easy, and rightly so since this is a kids game. There is one minigame however, called Balancing Act, that got infuriatingly difficult at the end of the game. This is not only because it is made to be more difficult than earlier versions of the same minigame, but also because of the frame rate issues that it has. Severe slowdowns made me loose this minigame over and over again. It almost made me want to throw my 3DS at a wall during the 2 hours it took me to finish the game, and that is not something that should ever occur in a kids game; There are a whole lot of kids out there with worst patience than myself.

The problems Paddington: Adventure in London has are too bad, especially since the overall presentation is pretty good. The game itself looks good, with colorful graphics and a character design that feels unique. All of the gameplay takes place on the lower screen, however, which means that there is no 3D available for the action itself. The interface is tucked in neatly on the upper screen and shows which area of London you are currently in, how many tasks you have done in that area, how many sandwiches you have found, and your “polite” ranking. These are shown with icons that are easy to understand for most kids and adults alike.

I get that kids games are supposed to be simple, intuitive, and easy to play. It is clear that Paddington: Adventures in London is trying to achieve this, but it is almost too simple of a game as a result. It does not give the player as much of an adventure in London as promised by the title, as there are no events or dialogue in the game that try to captivate. It’s a minigame grind that I am pretty confident will not be able to keep the more impatient kids occupied for long. There are better flash games for free online that are geared towards kids, games that can present interesting story and gameplay.

A 3DS code for Paddington: Adventures In London was provided by Kids Mania for the purpose of this review 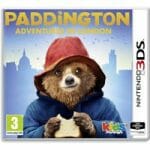 Massive Content Update on Mobile for Injustice: Gods Among Us