The show floor at this year’s PAX East was less about expensive Triple A studios and more about the influx of Indie games. There is the Indie Megabooth and the Indie MINIbooth but there are also other indie titles sprinkled in here and there too. We had appointments all weekend long and here are some of the indie titles we checked out that we think are worthy of your attention. It’s a good cross section of titles ranging from shooters, party games, retro, and tower defense. Check them out, dig deeper, go crazy for indies like we do. 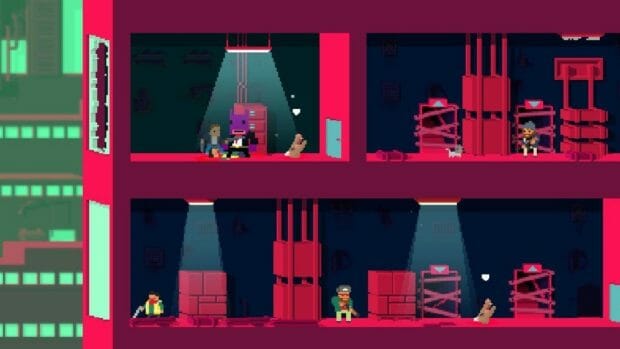 Roll7 might be best known for working on the OlliOlli franchise but at the same time they’ve been busy working on Not a Hero. After several different iterations the team is closing in on releasing their 2¼D cover based shooter to the masses. BunnyLord is running for mayor and has vowed to clean up the city streets. You play as an ex-professional assassin who’s now the campaign manager for BunnyLord. As you progress through the levels you will need to shoot, slide, and dive into cover in order to survive. Be prepared to die a lot but the game is very rewarding once you’ve mastered the in-game mechanics.  Not a Hero will release this Summer for PC and PS4.

How many times have you had the urge to play a game where you steal an egg-laying goat? Well, now you can with Juicy Beast’s Toto Temple Deluxe. With a massive crowd constantly around their booth at PAX East, it was hard for us to squeeze in a few rounds but we managed after a short wait. Players in this game will engage in  fast-paced local MP action. The game is essentially a glorified game of King of the Hill. Players will need to steal the goat and maintain control of it for as long as possible. Oppossing players can use a dash mechanic to knock into the person with the goat, thus dislodging it, and then try to make off with it in tow. In classic mode, the first person with 3000 points wins the game. Other modes include a Bomb mode which can be played in free-for-all or teams. Each temple comes with its own exploits so always be looking for a way to get the upper hand on your opponents. Totem Temple Deluxe will be released this Summer for PC, Ouya, WiiU, PlayStation 4, and Xbox One.

Extreme Exorcism is a game we first heard about last September at the Boston Festival of Indie Games. It can be classified as a paranormal platformer. The main character of the game is Mae Barrons who is doing her best to rid a haunted house from evil spirits. The only catch here is that after each ghosts has been killed another appears and mimics your last move. Therefore it essential to strategize how you move your character and what weapons you use to exterminate the ghosts. It’s a classic case of becareful what you wish for here. Extreme Exorcisim features a story mode with ten areas to explore. Story mode can be played in local 1-4 player co-op. Other features include local MP with up to four players, challenges with specific fules, and leaderboards. Ripstone will be releasing this title later this year on PC, PlayStation 4, and Xbox One.

Snuggled on the outskirts of the Cooler Master booth at PAX East was an upcoming game for the PlayStation 4 called Axiom Verge. Developed by industry vet Thomas Happ, Axiom Verge is a 16Bit retro-style action platformer. The game has been inspired by games of Thomas’ past like Metroid, Contra, Blaster Master and more. You play as a dead scientist who perished in a failed lab experiment and now he finds himself in a strange alien world. The game features over 40 plus weapons and tools, 60 plus upgrades, 70 different creatures, and around 700 rooms to explore. Inspired by glitches in some of the aforementioned games, players will have the ability to scramble enemies, corrupt environments, and enter hidden areas. Axiom Verge is part of the PlayStation Spring Fever sale and will release on PlayStation 4 on March 31.

Fortified is a game we’ve seen now at PAX Prime, PAX South, and PAX East. Unlike some devs who are making the circuit, the Fortified demo keeps evolving over time and thus drawing us in for subsequent plays. This is the first time we’ve been able to play some of the different classes and see some of the visual improvements to the game. The premise hasn’t changed as it’s a tower action / defense game played as a third person shooter, with up to four players (local or online). The setting for the game takes place in the 1950’s, admist an alien invasion of Earth. Currently, there are four classes: Rocket Scientist, Government Agent, American Hero Space Man, and a Marine Captain. Each character can be leveled up and they all come with different abilities to keep the action fresh. Levels are dynamic and will keep players on alert as you’ll need to strategically place your defensive weapons in the correct lanes. The game will initially come with 12 maps, 5 different robot/alien types plus a boss to take down at the end of each map. Clapfoot will be bringing Fortified to Steam and Xbox One later this year. 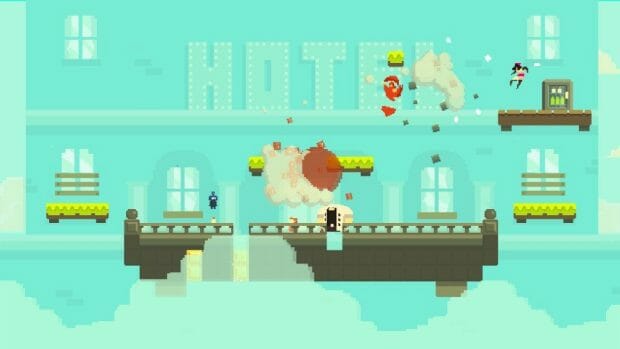 Local multiplayer party games are all the rage these days and tinyBuild are one of the leaders of bringing the chaotic fun. Next up on their release schedule is Check-in, Knock Out by Lionade Games. The premise is rather simple in this bit brawler. Your hotel is double-booked and you need to duke it out in order to see who stays and who goes. Players can pick up anything and throw it at their opponents, which can knock them off of the fighting platform, think Super Smash Bros. The downside to picking everything up and throwing it, is that the level becomes increasingly smaller. Each character has their own special abilities but each one will want to throw the skull-designed suitcase at the opponents to deliver a fatal blow. The last occupant standing wins the match, or is it room? Everyone who has picked up a controller can join in on this one, but those truly skilled will be the ones to prevail.

Dontnod Knows What It Would Do With a Remember Me 2