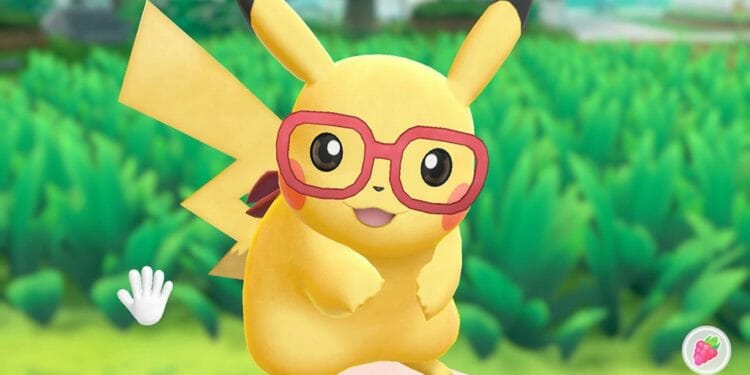 We have returned to the Kanto region in Pokémon Let’s Go, Pikachu! in glorious high definition. With crisp, clean and smooth graphics, Let’s Go looks amazing both in the Switch’s docked and handheld. The player is asked by Professor Oak to travel around Kanto and capture and collect info on every Pokémon. Trainers meet their partner Pokémon, either Pikachu or Eevee depending on the version purchased, and explore Kanto with their partner. By shaking the controller from side to side or by going through the main menu, trainers can interact with their partner. The handheld mode is more fun to pet Pikachu and change his/ her hair style. Eventually, trainers will have access to accessories and outfits to dress up their Pokémon partner. It’s a cute addition that functions as a way to grow the friendship between the trainer and Pokémon.

Pokémon in the Kanto region are free to live in the wild and are no longer limited to hiding in bushes unseen until a trainer bumps into them. Players can see the Pokémon just like in the mobile game Go! and the similarities continue with the way they are captured.  Trainers do not battle against wild Pokémon instead they capture them right after encountering.  All that’s needed is to throw the PokéBall or several to try to capture them. It’s an enjoyable mechanic . No longer are trainers bombarded into fights with wild Zumbats in Mount Moon. Instead trainers have the choice to attempt capturing every Pokémon to gain experience for their party or to simply skip the Pidgeys of the area and focus on the more uncommons and rares.

The graphics are refreshing to look at. Every line appears smooth and crisp even when playing docked. The saturated bright colors give off a happy aura making it impossible not to smile when playing. The chibi-style characters are absolutely charming. Even the adults characters are given a simpler- adorable look. Running into the same NPCs throughout the map gives the game more feeling. Players will start to care more for the characters of the game and hope to see them again.

Let’s Go is far from being perfect. Playing in docked mode on a television screen makes the absence of voice dialogue VERY noticeable. Seeing Team Rocket’s Jesse and James throughout the story gives this a 90s nostalgic feeling. The mechanics are simplified and in some ways feels somewhat Lot’s of opportunity with trainers to battle.  The two player option is really fun to be able to share the experience with a friend. Regardless of previously playing a Pokémon game or being new to the series the second player will have an easy time playing with a shared party. By activating their controller a second trainer appears on the screen and will follow the main trainer as long as the controller is connected. Sadly this ability of seamless 2-player option is not available with Master Trainer battles.

The PokéBall Plus controller adds to the Pokémon experience. It gives players the sense of being a real trainer. Players who choose to use the Plus as their main controller can theoretically play through the game with it, except some areas of the menu are inaccessible. Another downside of this controller is the inability to access the Switch’s home menu. A joy-con is still required to exit the game and access the Switch menu. Another thing to consider before purchasing the PokéBall is the expense. At $49.99 it is defiantly not necessary. Except if you wish to obtain Mew who is “inside” the controller and can only be obtained after purchasing the PokéBall. Currently it seems as if Nintendo wants to charge players for wanting to complete their Pokédex or use Mew as an incentive to purchase the PokéBall.

Pokémon Let’s Go, Pikachu! is a light-heated adventure containing changes to the usual Pokémon games we are used to and it shakes up the franchise. The two player option is really fun to be able to share the experience with a friend. Catching a Pokémon with two players make fun no boss battles with is annoying. Still it’s a welcome addition to be able to have two trainers play the same game on one system. Friends don’t necessarily have to purchase their own Switch and copy of Let’s Go to share in the fun.  It’s actually quite difficult to stop playing. The nostalgic feeling lingers long after the Switch is turned off.  It’s a 90’s Pokemon trainer’s dream to be able to play Pokémon on a television screen in such a beautiful way. Pokémon Let’s Go is a perfect combination of old and new mechanics that is great for both seasoned trainers and those just earning their first starter.

Check out both versions of Pokémon  Let’s Go! and let us know which edition you are playing or want this Christmas!

Red Dead Redemption 2 Got It Right

Way To Ruin The End Of Far Cry 5, Ubisoft!