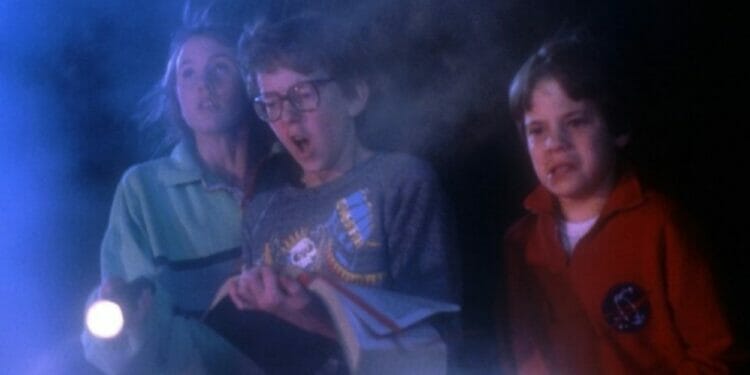 I grew up in the 80’s and 90’s so I was one of the lucky ones that got to experience some of the best cinema, cartoons, music and comic books had to offer. I can’t even imagine growing up without my Goonies VHS tape, or my Transformers on Saturday morning. Obviously I didn’t get to see everything, The Gate is one of those children ensemble movies, but with a scary twist. My parents most likely kept this one away from me because when I was little I was scared of those slimy Gremlins.

Pre-teen Glen has a horrible nightmare where he is left home alone, he gets to his giant tree house in the backyard only to watch it be stuck by lightening. This startles him away and when he glances at his backyard he notices that some construction workers have chopped down the same tree that was struck by lightening. Odd coincidence or fate?

Glen’s parents decide to leave for a small vacation and leave Glen’s older sister (Al) in charge, this doesn’t stop Glen from getting his buddy Terry to check out the wreckage in the backyard. As they attempt to move the wood to see if Glen’s dream really happened Glen cuts himself on the rubble and a considerable amount of blood drips into the huge hole. While moving the rubble they do find a huge geode in the hole and take it back into the house.

Glen and Terry break open the geode after seeing that it has left a message in one of their notebooks. Once they open it and read the words they unleash the can of worms. All Hell literally begins to break loose and without any parental help Glen, Terry and Al must stop the world from ending; and clean up the house.

Now, this is where the movie falls flat. Sometimes child actors just aren’t the best. I will admit that even in the first two Harry Potter movies, there are some cringe scenes. The Gate has a lot of those. This was Stephen Dorff’s very first movie and I’m happy to say that his acting skills got much better for his role in Blade. I acted a smidge in kindergarten and I know that if I watched my old VHS copies now, I’d be uncomfortable.

They try their hardest to be believable, Dorff is the worst, his buddy Terrence, played by Louis Tripp, does a better job. He is a few years older and that probably is why his performance is better. This isn’t a deal breaker, I mean kids usually can’t act, and sometimes that fault lies on the director. Either way, the uniqueness of the story will keep you wanting to watch. You can enjoy it while giggling at the acting.

To be honest, the special effects are actually pretty good. I have always been a fan of stop-motion animation. I grew up watching Jason and the Argonauts and the Voyage of Sinbad, both of which had amazing Ray Harryhausen effects. That man was pure genius with his stop-motion animation. Now, he didn’t do the effects for this movie, but they are similar in scope.

I personally would much rather see this type of special effect now in horror and science fiction movies. If done well it looks amazing and you know that some very hard work and craftsmanship was put into it. All the little minions that come out of the hole and the final minion look simply amazing. This type of skill always fascinates and bedazzles me!

This isn’t the best horror movie by any means, but with October very soon upon us, it may be a good movie to curl up with one night. I know that I watched it on Amazon Prime, then watched the sequel soon after. Are there better horror movies? Yes. But THIS one has a real unique story which is why I enjoyed it so much.

I wish the acting was better and that the story was more fleshed out, but I’ve not seen too many movies where children must close a portal to hell in their own backyard. You won’t re-watch this over and over, but it is a good one and done type of movie, just watch out for minions stealing your popcorn!

The 80's was a great time to be alive and a great time for children's movies. Does The Gate stand shoulder to shoulder with The Goonies and Monster Squad?

What Is SaaS Testing?

[…] OLD; I grew up when Karate Kid was in the theaters and I’m pretty sure Mom took me to see it when I […]