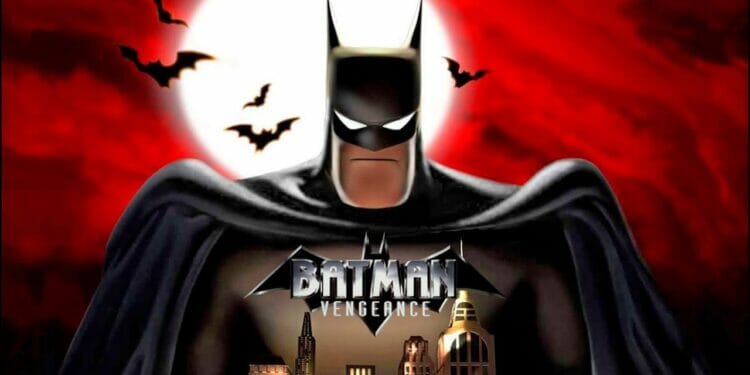 Oddly enough I started playing this game on September 5th, the 28 anniversary of Batman: The Animated Series debuting on television. When I started playing I had no idea that we had already hit that anniversary. Either way, this is one of the better licensed games from the era of the dark times, in 2001 there were very few great licensed games. Batman: Vengeance is actually a good Batman game before we were given the perfection that is Arkham Asylum.

I’m a huge Batman fan and bought this back in 2001 for my GameCube, I never got very far because I would get frustrated easily back then. I still have my GameCube version but came across an OG Xbox version so I decided to replay it from the start. Plus I have the HDMI adapter for my Xbox and it makes the game look a BIT more crisp. I can’t afford the EON Adapter just yet. Maybe one day for my Cube games.

Like most nights in Gotham, this tale begins with a kidnapping, but not any normal kidnapping; this time The Joker has stolen a small boy from his mother. Batman is hot on his trail only to find he’s been tricked by Harley Quinn and The Joker. It was a trap and a set-up. Since it is Batman he subdues Harley Quinn while The Joker takes a swan dive and is presumed dead. Once Harley is back in custody Batman reclaims his place on the nearest rooftop.

Nights pass and as Batman continues to fight his foes of the week, he begins to wonder if The Joker is really dead. Clues keep popping up and capers keep happening that have The Joker written all over it, specifically a Joker Blimp in the air. He begins to question Harley to see if she knows anything. Of course, she doesn’t. You get to fight a large chunk of the rogues gallery in this game, all while wondering when The Joker will make his return, if he does.

The controls are definitely not as smooth as I would have liked them to be. Using any of your gadgets is cumbersome and usually puts you into First Person mode, which can be off-putting.  Y is most versatile button in this game, when you’re close to a wall if you press it you can hug the wall and it is also your action button when you encounter something in the environment.

Melee combat is easy, thankfully, A is kick but when you’re not fighting it is jump. And X is punch so you can cram The Joker’s teeth into his skull. That is about the only thing that is simple with the controls. To use a bat weapon you must hold the Right Trigger and scroll through them to what you want. Once you pick one it goes into FPS mode where you can still strafe, but it is confusing at first. I’m not good at inverted controls and for the life of me I could find no way to put them to normal controls.

When I am in inverted mode I make a lot of mistakes. It is not how I game and I have never gamed with inverted. This puts me in a huge disadvantage when playing the game. Especially when you fight bosses that need you to use Bat weapons to defeat them. This makes me so happy we have the Arkham games!

The Look and Sounds

The voice cat is superb, I mean when you bring in the cast of the show you’re going to get pure gold. Everyone is here from the show; Kevin Conroy as Batman, Mark Hamill as the Joker, Arleen Sorkin as Harley Quinn, Michael Ansara as Mr. Freeze, Tara Strong as Batgirl, Diane Pershing as Poison Ivy, Efrem Zimbalist, Jr. as Alfred Pennyworth, Lloyd Bochner as Mayor Hill, Bob Hastings as Commissioner Gordon. That is perfection! You simply cannot do any better than that. They all loved their characters and it shows in the show and the game.

I will admit, that there are four far better Batman games out there; every Arkham game is far superior to this title, in story, controls and graphics. Maybe not so much in voice acting because even Rocksteady couldn’t nab all that talent. The four games from this generation are pretty good considering they were developed in the dark times of licensed game; the only one I would avoid completely is Dark Tomorrow. My God that game is hot garbage burning on a dumpster fire, I’m even scare to Retro Review that for you!

Batman: The Rise of Sin Tzu and Batman Begins are both very good games for the times as well. I like the controls of those two games a little better, as I said Vengeance’s controls can hinder your progress. But the overall quality of the game allows you to over look those controls. I love being able to play an episode of The Animated Series, it makes me smile, even when I fail a mission now and then due to control issues.

I would recommend this game to any hardcore Batman fans or fans of the cartoon. You really do get to play an episode of the series and I love this game for it.  All the voice talent is there, all the rogues are there and the overall feel of the cartoon is there. I can’t express that enough! If you love Batman and have a PS2, Xbox or GameCube you owe it to yourself to find a copy and play this title. It is amazing. Then marathon the cartoon!

Batman: TAS was ruling the early afternoon time slot, but does Batman: Vengeance hold up to how amazing the animated show was?