Retro Review – Way Of The Samurai 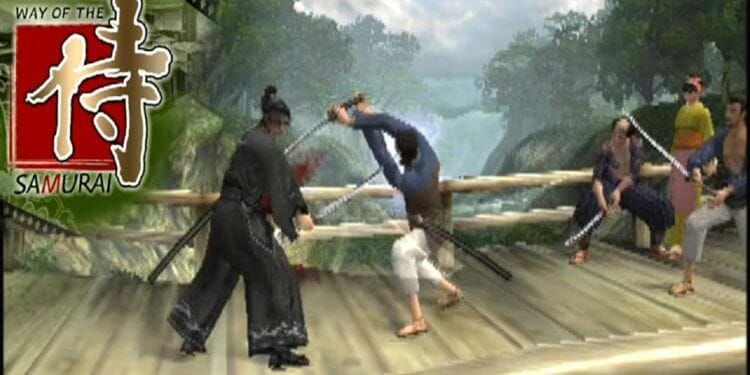 Back in 2002 developers had a little bit more freedom with what they wanted to do, which lead to a huge variety of types of games on the shelves. Some of these games I am just learning about thanks to YouTube and fellow gamers. Way of the Samurai happens to be one of those titles that I had no idea about when I was 23, instead I was probably replaying Resident Evil for the hundredth time on my GameCube. Way of the Samurai has been on my “to-play” stack for quite sometime, but with the imminent release of Sekiro: Shadows Die Twice I wanted to take a look at a game in that same vein. Since I can’t play games out of order, I decided to start with the first game in this series which was developed by Spike and ACQUIRE.

You play as a wandering Ronin during the Meiji Period in Japan’s history. During this time Samurai were outlawed. Your name is Kenji and you have just arrived at Rokkotsu Pass in 1878. What you find in this desolate outpost is a huge power struggle between three different factions. Two of the factions are Samurai warlord clans, the Kurou family and the Akadama clan who have become enemies due to the fact that the Kurou family wants to sell the local foundry to the third faction, a new government. The Kurou family welcomes the government intervention, but the Akadama clan would like to see the government kicked out of the pass. You, a wandering passerby somehow gets sucked into this who fiasco. You can side with one of the three factions or with none at all, your decisions will grant you one of six endings.

This game reminds me of an early build of a Bioware game, there are branching storylines and even branching dialogue options, which was pretty advanced for 2002. You learn about all of this during the lengthy tutorial that greets you after you chose what your samurai will look like. Now don’t get all excited about designing your avatar there are very few choices to pick from in the beginning. I just picked the guy with the scar and the fancy yellow clothing, might as well standout in case I’m surrounded by a lot of foes. I’m going to give you a brief review of the controls due to the fact that if you get the game you’ll be forced to go through the tutorial that has background music which sounds like it was written by Primus. When you see a brown icon in the lower right it means that you can speak with the NPC nearest you, press O to talk. To move around you use the D-pad or analogue stick. L1 draws and sheaths your sword, Square is pick up, R1 is block in combat, Square in battle is weak attack and Triangle is strong attack. You’ll use both of those buttons the most, your best bet in combat is to slash hard an fast, and should you get low on health R1 and Square is kick, you can kick a radish out of the ground and heal yourself.

For a 2002 game it looks very good, keep in mind I am using the Pound PS2 HDMI cable to my flat screen, which most likely helps the visuals due to the fact that I can play on a higher visual setting on my PS2. The normal enemies are pretty much the same, but your fellow Samurai and the bosses you encounter all have a great design aesthetic. I was always excited to find a new main character because every one of them stood out so much, then I was allowed to massacre them if they were part of a different clan than I. The exterior world can get a little boring, and it is easy to get lost in; the map just shows you the layout of the land, not where you are in the zone, so I did get lots easily. I was quite surprised how immersive this game was though, seeing as it is seventeen years old, it has some of the mechanics that we are so use to now. It kind of is a trailblazer for the left thumbstick as camera, the branching story, the dialogue choices, I never expected to see any of that in a 2002 game. The only mechanic I wish they had left in the prior generation was the use a save lose a save one. Basically if you load up your save, which you only get at certain points in the game you lose it when you load it. If you die you lose all progress you had and have to restart completely. It is kind of a bummer, but the game being so short it isn’t too much of a nuisance.

For a 2002 game Way of the Samurai has a lot going for it, good graphics, well done controls, an interesting era and some nice music once you get into the main game. I can count the number of Samurai games on one hand, which may change March 22nd if  Sekiro: Shadows Die Twice is successful. I’m glad that I have all three Way of the Samurai games in my possession as well as the Seven Samurai game I still need to dust off and play. This title would be a nice way to introduce you to the world of the Samurai and their swordplay, their lifestyle and the like. If you’re looking for a VERY different game to pick up, I would heartily suggest grabbing this title if you can find it. You won’t regret it, and even though it is a very slow burn of a game, you may find yourself enjoying your time in Rokkotsu Pass.

Way of the Samurai