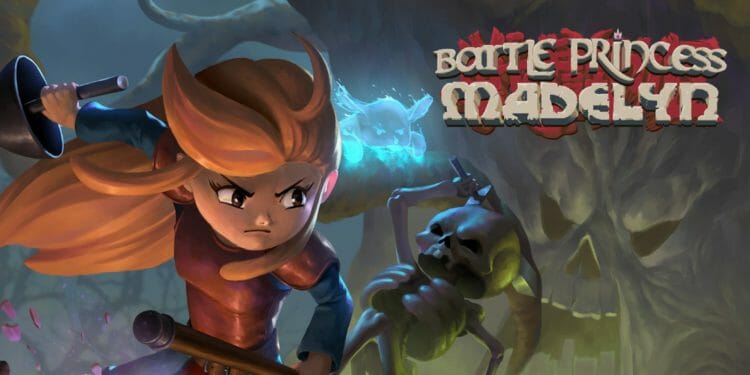 Battle Princess Madelyn is a recreation of an old classic game, but by imitating an old classic rather tan improving upon it, it retains the same missteps of those classic games, rather than improving upon them and building on their foundation. While it doesn’t misstep in all the same places as classic gaming, there are enough here that cause Battle Princess Madelyn to stumble, tripping up a good game from becoming a great game.

Battle Princess Madelyn is modeled after Capcom’s classic Ghosts and Goblins and it really shows right away. Madelyn controls almost exactly like Sir Arthur throwing various projectiles in 4 directions, as well as collecting money off of enemies and getting armor power-ups and different types of weapons as drops from them after they die.

The controls are solid and I didn’t have any issues with aiming or jumping on platforms and sniping enemies from a distance. All the power-ups lend themselves to slight different speeds and firing styles, letting you hit enemies in slightly different ways, and there are even melee weapons like swords, even including a whip that has a resemblance to a certain Namco vampire hunter weapon. The weapons themselves are responsive and I had no real trouble using any of the controls. 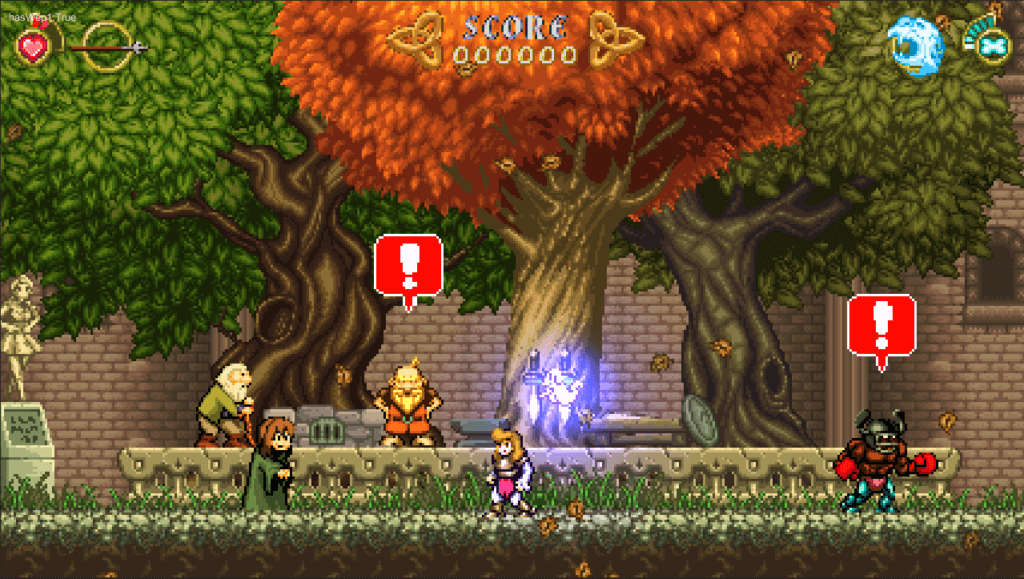 The game’s art style and music are very resemblant of the old style arcade games, having a themed soundtrack that is pretty catchy and fits all of the areas pretty well.

I never felt annoyed by the sound tracks like I have in other games with generic ones and the sound effects themselves are perfectly balanced between the music as well. The pixel art is also very good at representing the retro nature of the game, working well to look classic, but with some weird UI decisions here and there.

Some of the assets look a little weird here and there but nothing is horribly broken for the most part, they just aren’t as high quality as most of the other assets, which really make them awkwardly stand out.

The map would have been good to use to point out secondary quest objectives, but they mark where you are, where the NPCs are for quests, and where statues are so you can make sure to grab keys for the areas and bosses in the story mode. Most of it is fine and does a good job of representing the game very well. 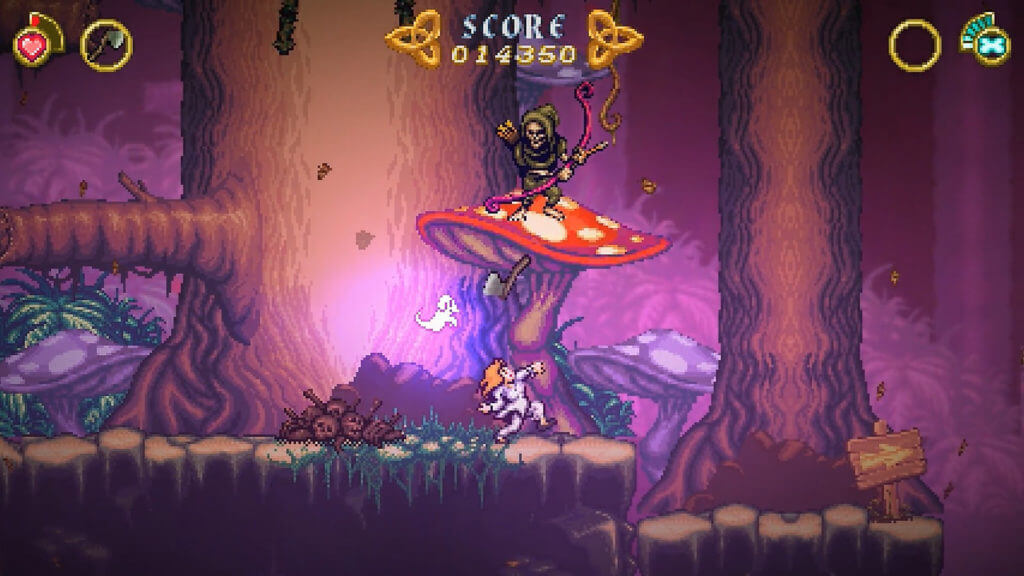 The game itself is separated into both a Story Mode and Arcade mode, offering two convenient ways of play that are both very separate, Arcade mode being almost exactly like an old style arcade game in such a good way. Enemies give you points, certain enemies will drop armor upgrades that also effect your currently equipped weapon, and you can get different weapon drops from them.

Each zone is designed as a quick platforming and enemy filled challenge of moving forward until you get to the next or a boss. The platforming isn’t too infuriating, but there are some problems I will mention later on in this review all at once. It’s a shorter mode of the game, clocking in at just a few hours, but it still maintains the spirit of the arcade games, which I did enjoy.

Story Mode is a bit longer, with dialogue and a central narrative stretching out and filling in the central plot of the story that arcade mode helps represent with no dialogue. The story starts from a perspective of a grandfather telling a story to his under the weather granddaughter.

The story is very much a grandfather’s attempt to change the story and put his granddaughter as the title character, filing her family into the other roles as well, and I think it’s really cute the way that it’s handled. The dialogue comes off as a bit awkwardly phrased in bits, and there is a weird bit at the end where the central villain is never even named nor are his motivations ever explained, but overall it’s ok for what it is.

The Story Mode has completely different areas then the Arcade mode, and it feels more like a Metroidvania discovery game then it’s traditional arcade experience. There are keys to collect for bosses, currency can be acquired to use to upgrade your armor and weapons, although that seems to be its only purpose, and collectibles scattered about the areas in form of dolls that can be obtained be either finding hidden ghosts or finishing side quests.

Weapons can also be permanently obtained and used, making it interesting to try out your growing arsenal and to see which ones you like. The bosses are the same ones used in the Arcade mode as well, and practically play the same as in that mode, although you might be better equipped to deal with them then in Story mode. 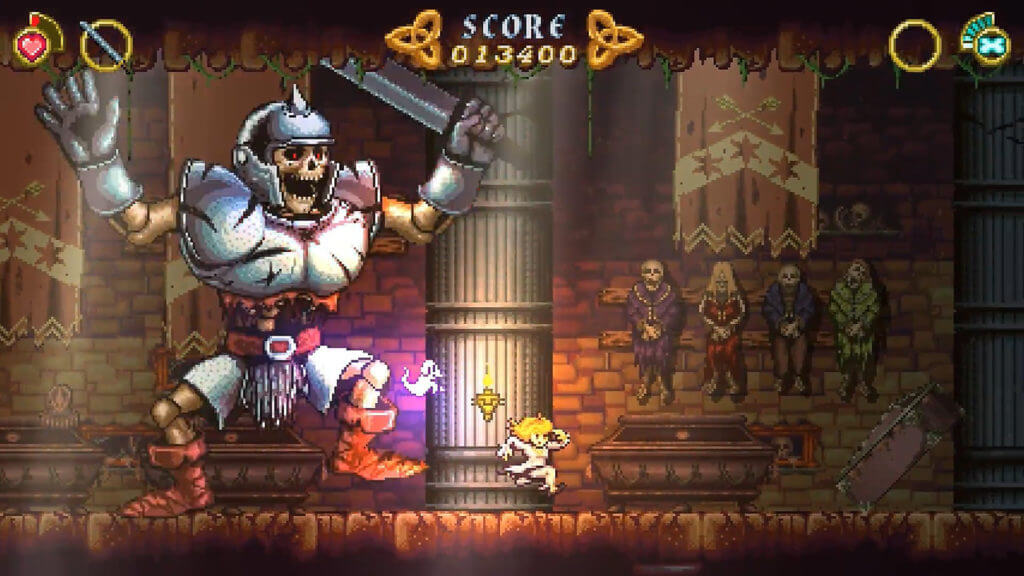 However, this is where the problems with Battle Princess Madelyn begins. The map itself doesn’t seem to mark any secondary objectives down, making it very hard to know if you can complete the objective at the time I receive the mission or not, having to run all over the general area that it is stated to be in, when it could easily be marked on the map.

The secondary missions are bland, and are always to either find an object, or find a person, who then has to be protected from insert number of really easy enemy skeletons. That makes them repetitive, boring, and frustrating to even find, which is a very infuriating trio of adjectives.

Bosses exist, and are all at least different, except for the fact that 4 of them are the same basic boss near the end of the game, although they are technically optional, but they still choose the most annoying boss to replicate 4 times.

They all really only have 2 attack patterns however, making them predictable and easy to kill and just downright boring to fight multiple times, the final bosses even having 3 to 4 patterns but even that wasn’t enough to stay interesting for long until I figured out the pattern.

Fighting enemies and dodging obstacles is still alright, except for when you are hit. You can take up to around 5 hits when you max out your armor, but there seems to be some kind of physical force on your character when hit, and you are very awkwardly knocked back, most of the time knocked straight into an instant kill pit, of which there are a lot of in almost all areas.

This is not only annoying, but it just feels bad to be on the receiving end of since there isn’t really a way to prevent it from happening besides not getting hit, which can be very awkward sometimes.

This is somewhat remedied in that you have multiple lives in the form of a meter that fills up the more you kill enemies, but if you lose all of that, which can often happen with difficult sections with instant death pits, and you will have to deal with being sent back to the beginning of the section, which is even more annoying.

It’s difficult to feel like my upgrades mattered when I was still being killed in one hit most of the time, and it seemed like the enemies weren’t made to be threats, but entirely to just knock me to my death. It kind of undid the experience for me, making the multiple types of enemies, different settings, different enemy types and everything else just kind of a slog.

The collectibles can be just as bad, and while they are tied to only secondary missions and ghosts to find, there is a secret level to see if you get them all.

But there isn’t even a mention of where you can find specific dolls, meaning if you are only missing one or two, you have to search every area again and again, which is what happened to me because I had no clue where to find the last few. Making me have to search everywhere about the game and finding it only by watching probably the only person who bothered to post a 100% run and finding the one I missed.

It’s a small thing that would be very good to have because otherwise it becomes annoying if you want to see the secret level. 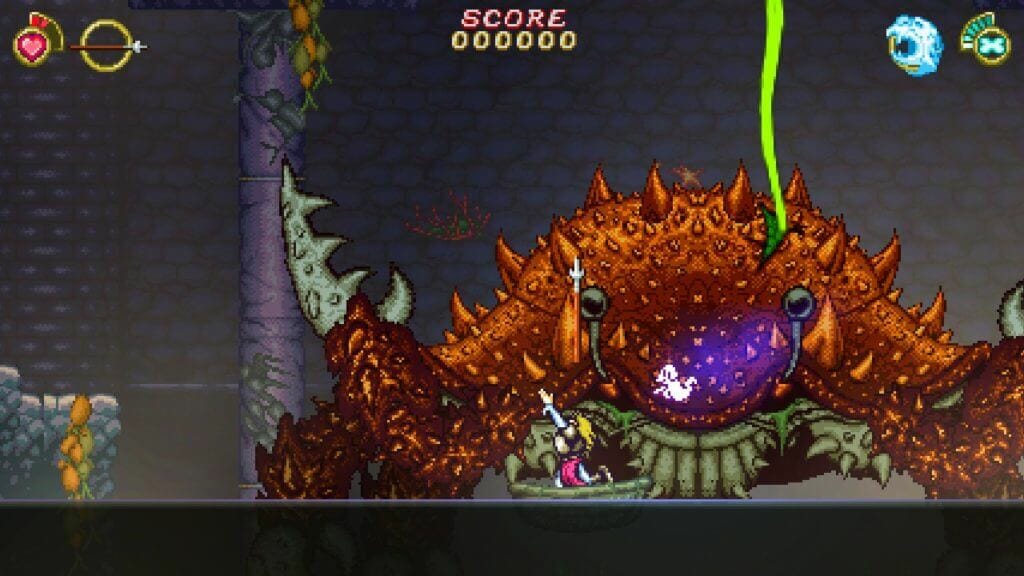 Battle Princess Madelyn is a classic game love letter to Ghost n’ Goblins that unfortunately makes the same missteps as the original source material. It doesn’t make any solid steps forward on its own take of the formula and instead comes off, unfortunately, as an indie clone rather than being something more and taking its own steps forward.

The bosses, enemies that aren’t a threat without instant death pits, and other modern conveniences that we have in games today are there for a reason, and I think that while the foundation where a truly great game is there, Battle Princess Madelyn would need to take its own independent footsteps in trying its hand at making something new, and instead of living in the shadow of a franchise much older than it, growing past it and paving its own path as something unique.

A game worth picking up if you want to play a classic style arcade indie game, but not something that doesn’t come with its own share of problems. I enjoyed my experience but felt like it could have been much more than it actually was, which was minorly disappointing and I hope the developer tries to make something completely new with the next entrant that was teased at the end of this one.

This review is based on a review copy of the game provided by the publisher.

Battle Princess Madelyn is a recreation of an old classic game, but by imitating an old classic rather tan improving upon it, it retains the same missteps of those classic games, rather than improving upon them and building on their foundation. While it doesn't misstep in all the same places as classic gaming, there are enough here that cause Battle Princess Madelyn to stumble, tripping up a good game from becoming a great game.

Under Night In-Birth Exe:Late[cl-r] will be a DLC Upgrade for PS4 UNIST Owners

How Technology is Changing the Fashion Industry