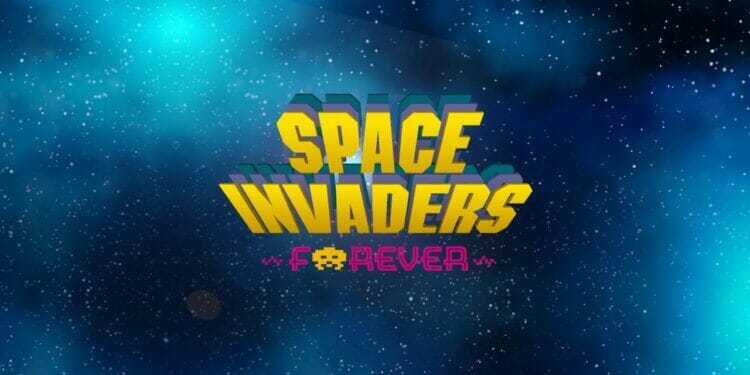 I’m probably the oldest writer at this site, so I still remember going into arcades when I was ten or so and getting to play a lot of the stand up arcade classics as they were meant to be played. I got to play the greats, Donkey Kong, The Simpsons Game, Teenage Mutant Ninja Turtles The Arcade Game, Dig Dug, Space Invaders and the like. Taito was one of the names that I would run to if I saw it on a cabinet, so when Space Invaders Forever hit the Nintendo Switch, I had to fight back those aliens!

Taito made some of the arcade greats and a few on the NES that I fondly remember playing with my best friend when I was little. Bubble Bobble was and still is one of my favorite couch co-op games that I ever played. Their catalogue holds so many memorable titles, Darius, Arkanoid, and Double Dragon. All of these titles bring back some tear inducing memories and made me excited to play Space Invaders Forever. When you buy this game you’re given three different games to play, which I though was pretty exciting.

This is where I usually have the “story” portion of the review, but seeing as this is an arcade shooter, there really isn’t any story other than to not die and pass the level. When you buy this game though, you get three different versions to play, all with strengths and weaknesses, but they make the price of admission worth it.

I played Space Invaders Extreme first due to the fact that it was the single player portion of the game. Being in voluntary lockdown makes it hard to do anything couch co-op at the moment. Space Invaders Extreme is a remaster of a remaster. The game started off as the 30th anniversary edition of the title, then in 2018 it was tweaked a little bit for the 40th anniversary and then released to Steam.

Extreme is NOT the Space Invaders that I remember, but that doesn’t mean I didn’t like it. They scrapped the slow original levels for new upbeat, flashy levels that no one who is prone to seizures should play. What this reminded me the most of is the Wario mini games from Nintendo. You would do the standard shoot aliens as they drop down, but then if you hit a high score or shoot the proper UFO you’ll go into special levels. These special levels are usually timed and can raise your point score. One thing I will say is that the music is fun, it reminds me of the dying days of the mall arcade when I would go there and play DDR and kick butt.

The more points you get the more difficult levels you unlock as you continue your adventure. I’m decent at this game and I couldn’t unlock the super hard levels. I’m curious what type of grade that I would have to get at the end each level, I usually got A’s and B’s, there must be something higher. Taito rates you like any Platinum Game at the end of each level.

This is the huge multiplayer aspect of the whole set. You can have up to three friends come over and you can destroy the alien threat all while comfortable on your couch. I did attempt to play this because it was the closest throwback to the arcade cabinet, but it was damn near impossible alone. Look at that picture, I tried my hardest to beat the first level alone and I just couldn’t.

Controls for this are basic, the D-pad or left thumbstick controls your little ship. B and A are fire. REALLY easy to grasp, but hard to execute when you have so many aliens to destroy.

This would be some great fun with brothers or sisters, friends, family, but alone, no fun. I just couldn’t convince Mom to grab a controller and attempt to play even the simplest of games. Oh well, maybe when I’m done writing this I’ll find some friends.

This was the biggest surprise for me. It was the first Nintendo Switch Game that MADE me play it longways. I’m glad that I had a Switch Lite for this title because using the normal Switch in handheld mode may have been too cumbersome. I’m new to playing game vertical anymore, but I’m glad that I was pulled back into that, we need more shoot em ups like this.

This game has a bit more story built into it, you play as a rookie pilot and you’re thrust into this sudden conflict. You must stop the ships bombardment from destroying the shield by bouncing their missiles and lazars back to them. To do this you use your finger to move the Pong like slider to reflect them back on those who dealt it.

I enjoyed playing this A LOT, I liked the little bit of story and the fact that there were characters that talked to you. It felt like playing an outer space anime on my Switch. Seeing as I’m trying to get into anime during all this spare time I have, I like little nudges like this from games I discover and review.

I’m glad that Taito isn’t forgetting the amazing games in the catalogue. Playing this reminded me that there is a Bubble Bobble 4 out there that I need to buy and enjoy! Space Invaders Forever is a nice jaunt back down memory lane, when times were simpler, when a game cost a quarter and when you could leave your house without a biohazard suit.

Not only does it bring back great memories to us Boomer Gamers, it is a fun game anyway. If you don’t have a lot of time to play you can knock a level or two out in ten minutes while you’re riding the bus or waiting for dinner to be made. I like that I can jump in real quick, beat some aliens then jump right back out to do adult things.