Plenty of style with some substance. 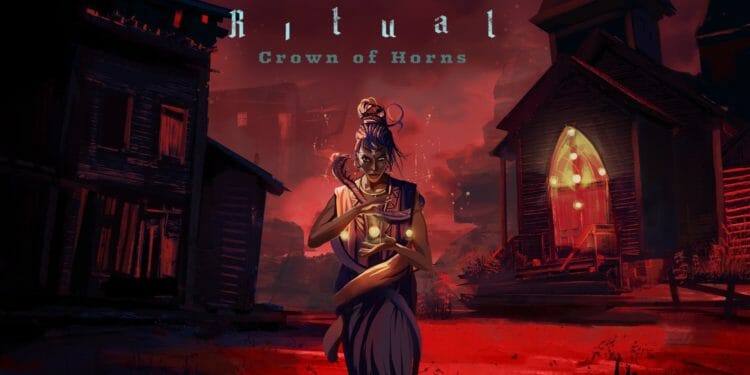 Ritual: Crown of Horns is a Draw Distance production. This Poland-based developer’s horror credentials are impressive, given their work in the upcoming Vampire: The Masquerade – Coteries of New York and Halls of Horror (based on horror-themed board games of the same name). Though Ritual: Crown of Horns is the most intriguing, as it is a more traditional action game with a western twist.

In Ritual: Crown of Horns, the player takes on the role of Daniel Goodchild, a legend of the wild west and a dime novel hero. Goodchild is hired to find a local Witch, however, he is overrun by a group of cultists, known as the Cult of the Horn, and is killed in the resulting conflict. In a strange than of events, he is resurrected by the Witch who has seen what the United States is becoming: a barren wasteland of evil souls and corrupted ley lines. 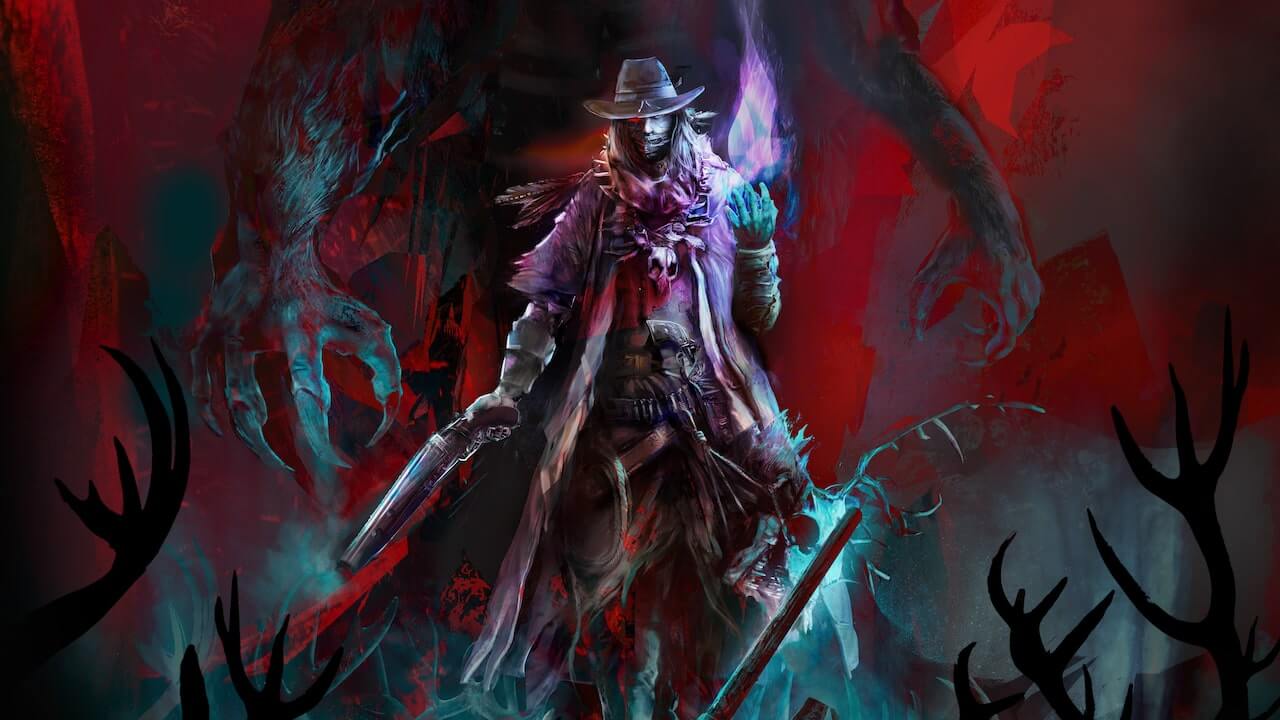 She strikes a deal with Goodchild, one that affords him the opportunity for revenge. However, it requires his heart and soul. This is due to the Witch needing protection from the Cult of the Horn, as the cult gains their strength from souls while the Witch’s rituals free said souls.

Ritual: Crown of Horns is a twin-stick survival shooter set in Western America of the 18th century in an alternate universe. Additionally, the game prioritizes precision over the running and gunning that has become characteristic of this genre of game. The overall result is a top-down shooter that forces the player to balance pre-planning and planning on the go to successfully combat enemy hoards. 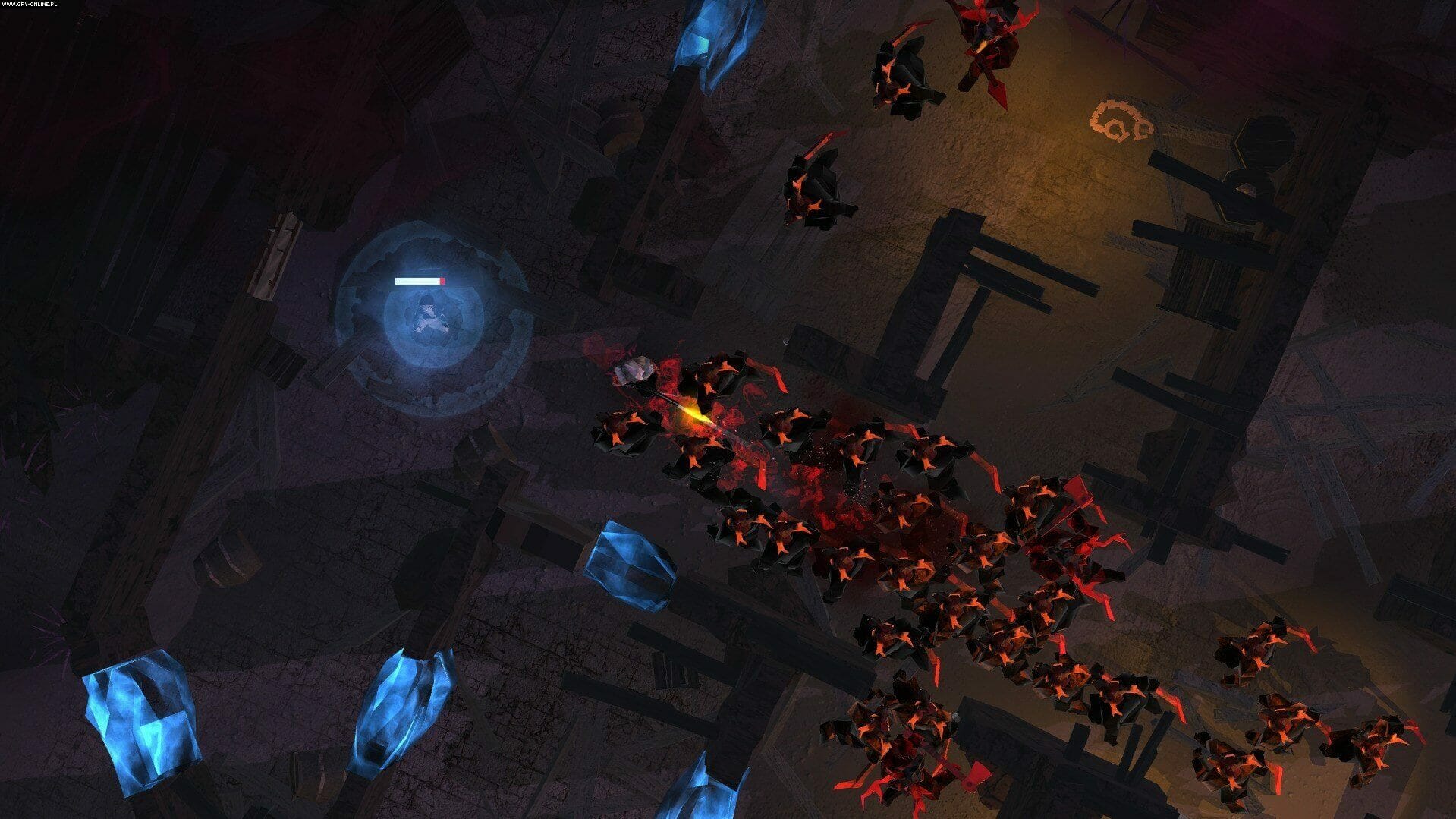 The downside of this is that it will consume a significant amount of time, which makes it impossible to keep up with the number of enemies. Also, If the player fails to aim before firing, then they will need several shots to dispatch enemies rather than the one-hit critical shot.

Ritual: Crown of Horns offers an informative tutorial that goes over almost all its mechanics. This is quite beneficial, given the game’s difficulty curve that always manages to induce rage and wound one’s pride. The player is made familiar with the standard stock of top-down shooters, then thereafter introduced to the spell mechanics and everything else that follows from there. 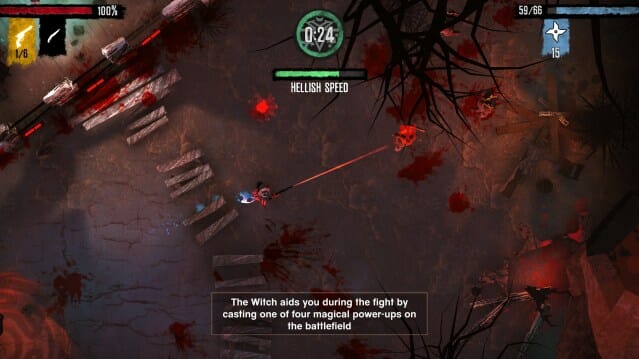 Ritual: Crown of Horns offers no functional controller support. This means players need to rely on the ol’ mouse and keyboard for the game. Their use proves welcomed, as aiming at enemies while maneuvering around levels tends to be problematic, given the small scale of areas.

Each NPC within the game provides specific gear and ability upgrades to Goodchild, with all of them being equip-able. The Witch, given her name and relationship with Goodchild, provides the player with spells and these are a necessary asset when it comes to dispatching foes. Other useful NPCs are the God of Guns and theTricktress. The former controls the player’s gun inventory, while the latter holds all your gear (hat, poncho, necklace, ring). 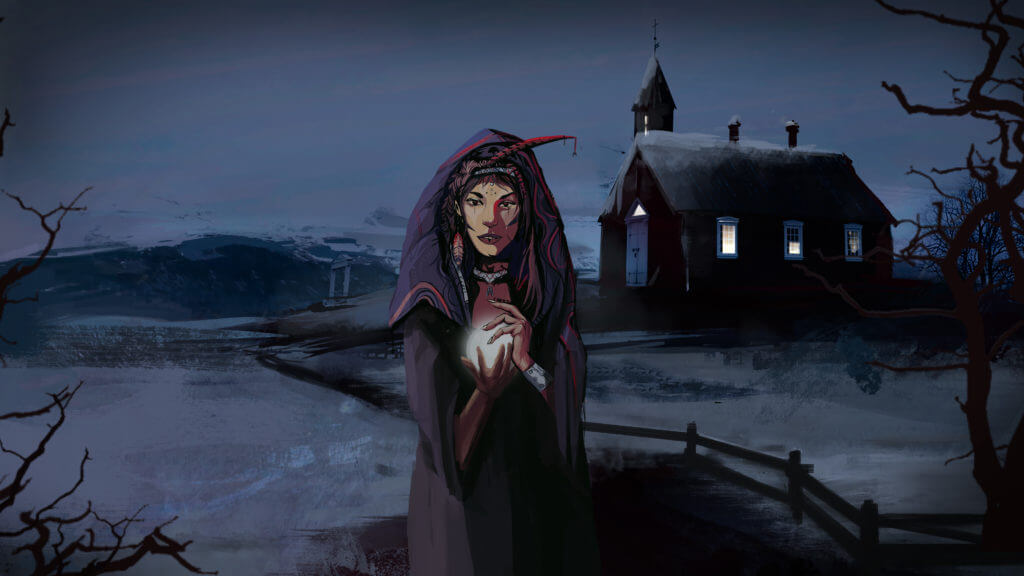 The Battles and Challenges

In Ritual: Crown of Horns each location the player visits presents its unique challenges. This is due to stages being timed, coupled with protecting the Witch (as she’s conducting her ritual, and surviving for a set duration of time. However, the final varies from stage to stage, as “easier” stages are 3 minutes long while harder stages and boss fights are 4-5 minutes long. 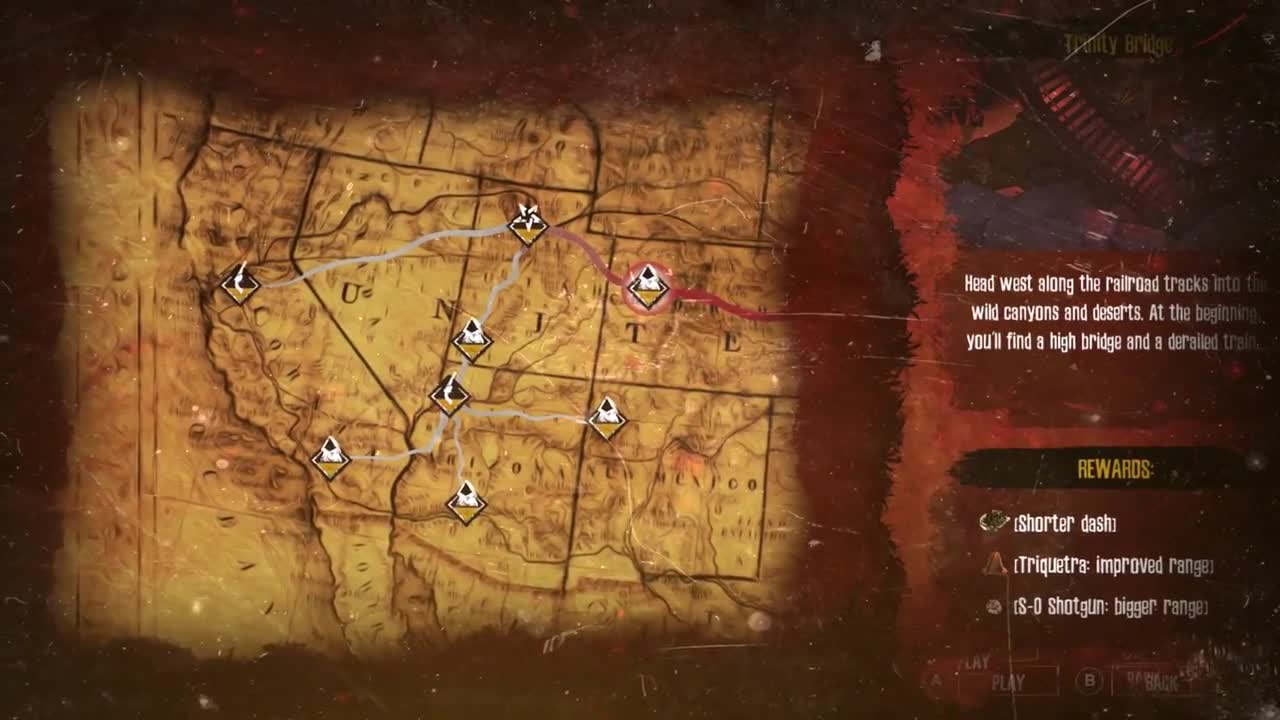 Ritual: Crown of Horns is a game where the player merely needs to survive and kill as many enemies as possible, and one would expect these stages to become unimaginative in their design. Fortunately, Draw Distance managed to make these stages challenging and diverse with some of them have barriers that force the player to maneuver around them or others that house portals which are only usable if dashed in and out of.

In addition to completing stages, the player can visit the Tricktress to view the Challenge Map. The Challenge Map adds a layer to the game that many players will find thoroughly enjoyable. Each map has three different goals that the player needs to achieve to earn more Demonic Horns. Challenges can be cleared individually, meaning the player can come back to the maps until all challenges are met.

In Ritual: Crown of Horns one can almost expect the quality of graphics and audio. The graphics for the game are certainly not the best, however, this is due to the point of view. Therefore, one has to acknowledge that it is not necessary to have the most detailed graphics. 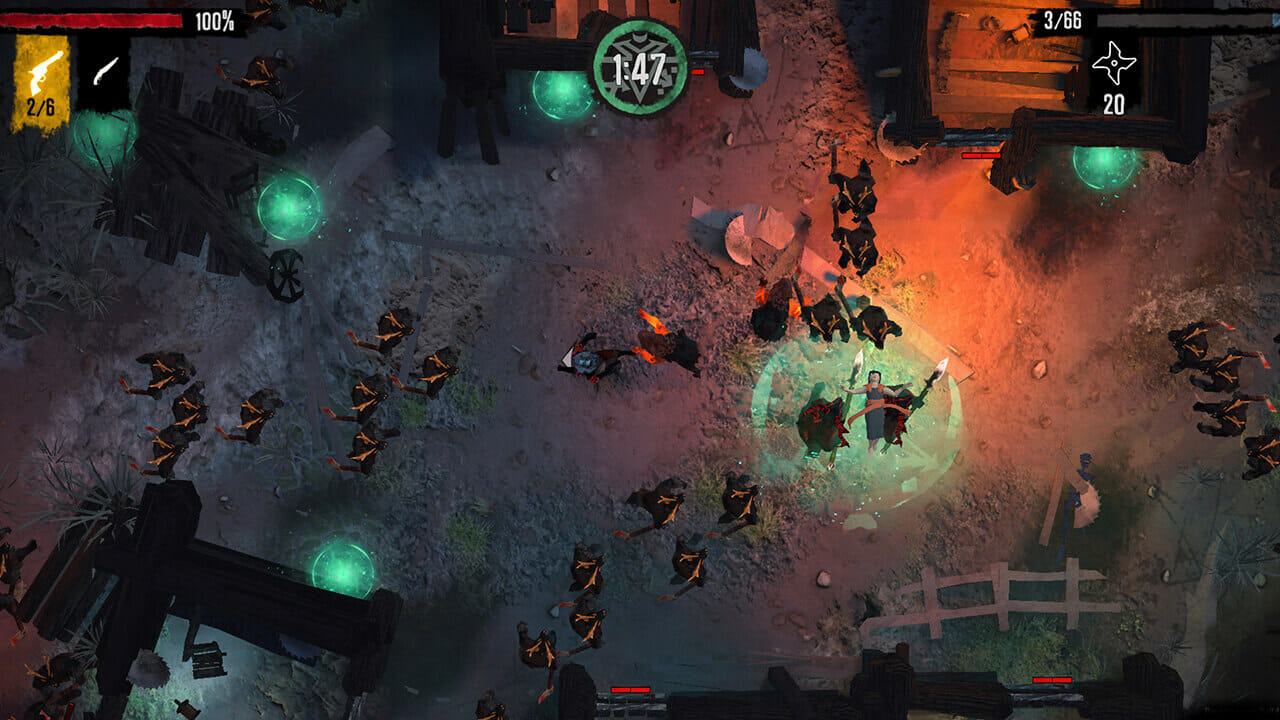 The music in the title screen and well into the Bloody Heartlands is quite horror-like, which keeps the player tense throughout the game. Additionally, a guitar is used to combine western-style with the game’s horror-like setting. Furthermore, the music intensifies the more crowded an area gets and this plays into the earlier mentioned tension-inducing effect of the soundtrack.

Ritual: Crown of Horns is a game that attempts to distinguish itself as a fresh take on the top-down shooter genre. The game manages to achieve this feat by having a high difficulty curve that plays on supplementing the characteristic spray ‘n pray element of the genre with precision and strategy. However, this has its drawbacks as it results in the game mechanics filling unintuitive and slow.

Additionally, the levels due to their size often felt constrained, which proved frustrating at times, given that Ritual: Crown of Horns is a game that focuses on hoard based combat. Though the drawbacks may at times seem insignificant due to the sense of achievement the game offers alongside its high replayability due to the Challenge Map and inevitable numerous deaths.

Make sure to check out the launch trailer above and let us know what you think about our review in the comment section below.

Ritual: Crown of Horns is a game that attempts to distinguish itself as a fresh take on the top-down shooter genre. The game manages to achieve this feat by having a high difficulty curve that plays on supplementing the characteristic spray 'n pray element of the genre with precision and strategy.

There Are So Many VPN’s Out There. How To Choose the Right One for Gaming?