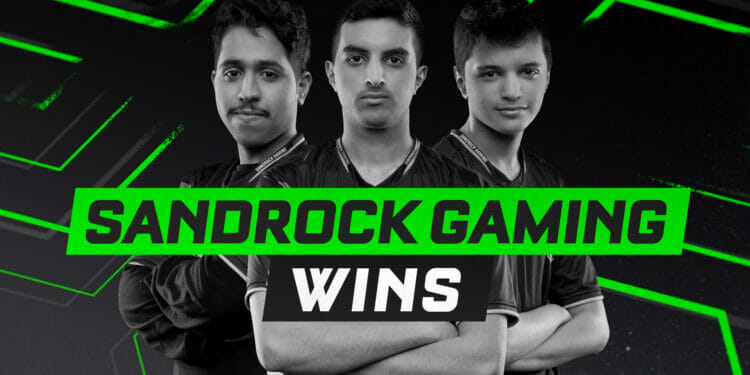 Just in case you haven’t heard, WHO ARE Sandrock Gaming? That name has been floating around the Rocket League scene for a few years at this point. They’re a team comprised of two, no other way to describe them, mechanical GODS, Ahmad and oKhaliD, with TRK511 playing third with Senzo playing as a sub for the season after he announced his retirement, purely because the Middle East and North African region had never been given a chance to play in the RLCS before… Until Season 11.

This season (Season 11), Sandrock Gaming FINALLY got their chance to show what they could do on the big screen after Psyonix announced they would be expanding the RLCS and including many more regions, the original regions were North America and Europe, South America, and Oceania. But this season was expanded to the Middle East & North Africa, the home of Sandrock Gaming. Asia-Pacific North & South and Sub-Saharan Africa. SSA hasn’t got any spots at the majors; strangely enough, they can qualify for worlds? It makes no sense to me, but here we are. ANYWAY. This was their chance; would they take it?

You bet. Sandrock Gaming grasped their opportunity with both hands. They went 3-0 in the Fall Split Regionals, winning all 3, pretty much with ease. They had a couple of games where they had it taken to them as it were, but they breezed through their region for the most part. You’re talking about a team here that got known by beating some of the BEST TEAMS in the world, whether that’s 1v1, 2v2, or 3v3, on 150ms ping. So realistically, their region should have never troubled them. They cruised to the major, becoming the 1st Middle Eastern team to play on LAN.

Okay, so they’ve built up a reputation of giving some of the biggest names in the world a hard time with their incredibly fast-paced mechanical gameplay. How did they perform on LAN? Well, they killed it! Their very first appearance on the big stage. Their very first opponent of the LAN was the 2nd seed from NA, G2 Esports. These guys were tipped as one of the favorites coming into the tournament after having a pretty solid Fall Split. SRG had no time for that, though, taking the best of 5 series 3-0! They qualified for the playoffs as the 3rd seed after going 3-1 in the Swiss stage, falling 3-1 to Semper (Europe, formerly Top Blokes) in round 2 but bouncing back with back to back 3-1 win over Furia (South America) and Ground Zero (Oceania) in rounds 3 and 4.

Before this tournament, I had money on Dignitas to win the major; for me, as a fan who has watched every second of Rocket League that I could cram into my eyes. The only 2 teams I could conceivably see winning were Dignitas or NRG; to me, they were the most consistent teams. Dignitas started the major like a house on fire, qualifying for the playoffs 1st seed, making those 9/1 odds I got look incredible. NRG were understandably the favorites, but before this major started, SRG were 30/1 to take it all with only Tokyo Verdy behind them at 36/1? SRG seriously showed off their skills.

For me, as a long-time RLCS fan, being able to get involved in my way by having a dabble on the competitive scene has been pretty fun, given as a Champ 1 player, I’m never going to be on that big stage. Let’s face it, the pros are LEAGUES ahead; if you’re like me and you want to get involved, then you should shop around, plenty of online sportsbooks are getting involved with Esports these days, and those that weren’t previously, started when Covid lockdown put all physical sports on hold. You can check out this JustBet sportsbook review among many others to see which sportsbook would be the best for you. ANYWAY, how did SRG make those 30/1 odds look moving into the playoffs?

Unfortunately for SRG, they had a TOUGH draw in the playoffs, after NRG somehow went to day 3 of the Swiss Stage and narrowly made it through to the playoffs as the 8th seed. The playoffs featured best of 7s instead of best of 5s, with the final being a deep breath best of 3 best of 7s. NRG took the first 3 games of the series against SRG, but SRG didn’t look bad in this game by any stretch, I think honestly the pressure of playing against some of their IDOLS kinda got to them a little bit. But they fought back, taking games 4 and 5 in back-to-back overtimes to bring the series to 3-2. NRG would eventually prove too much for them, they went onto the finals where BDS pretty much schooled them.

But that begs the question? The question we asked at the start of this article. What is next for Sandrock Gaming and, in a way, Rocket League outside of the big continents in general? OCE have always kinda put on a good show on LAN, they’ve never quite been there, but they’re getting there, SAM have always been known for their fast-paced attacking play with no consideration for defense. What about the new boys? Well, SRG came in from MENA with a complete package, in my opinion, they may be leagues ahead of everybody in their region, but that isn’t to say they can’t drag their region forward and make a competitive showing of things. APAC wasn’t necessarily the same. Tokyo Verdy walked their region and the APAC N&S Major qualifier, but on the big stage, they kind of crumbled, showing just how much work they had left to do.

FOR ME? Sandrock Gaming came out of this LAN with WAY more fans than they could ever dream of going into it, they showed that their hard work to get this opportunity was worth every second of it and they did all of this without arguably their best player, oKhaliD unfortunately couldn’t make the LAN, giving Senzo his opportunity. I personally would love to see the OG roster back in play for this Winter Split, get Ahmad, oKhaliD, and Senzo back as the main 3, drop TRK (who played incredibly on LAN by the way) back into the Sub slot, and allow them to run free. Do everything you can to get oKhaliD at the Winter LAN which hasn’t had its location announced yet and watch the team have fun. If you want to check out the full history of SRG as an organization and where they TRULY came from, I really can’t recommend this video from Rocket League content creator Sunless Khan enough, the story gives me goosebumps honestly.

I see nothing but a bright future for Sandrock Gaming and of all the teams in the world, they probably deserve it the most, they have worked SO hard for this opportunity and boy have they made a name for themselves, I really look forward to seeing what they can do in the remaining LANs of this season.

For all you Rocket League fans out there, what did you think of SRG? Did they surprise you? Have you seen them before? Let us know, get in touch! Until next time, take care folks!

7 Reasons WordPress Is An Excellent Choice For Students