We have a contender for best SSD on the market... 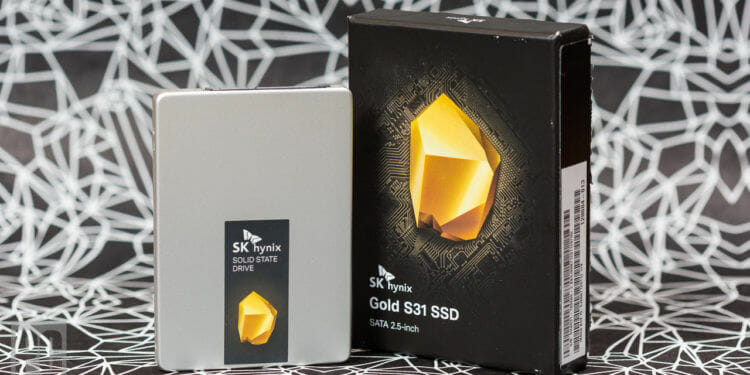 In today’s tech market, it’s getting more and more complicated to decide which PC parts to buy and which parts are the best. Depending on your set up, in terms of choosing a Hard Drive for your personal build, you can pick between a standard mechanical HDD, the smaller and faster SSD, an external and portable expansion Hard Drive or even now a motherboard built-in M.2 drive! Well today we have the Gold S31 Consumer SSD, a 1TB SSD from South Korean company SK Hynix that could be one of the best SSD’s we’ve seen on the market, and it might just be the drive you’re looking for. Let’s break it down:

The packaging for the Gold S31 is emblazoned with a gold nugget on the front with SK Hynix’s branding below it. The presentation of the box is stunning with the stark contrast between the gold and black. It’s also nondescript and professional. On that note, I was genuinely surprised how small the packaging for the drive was. But as they say, great things come in small packages.

The back of the box is even less descriptive, but it includes some spec and warranty information that appears in multiple languages. SK Hynix is a Korea based company selling all over the world, so it makes sense to cater to multi-language markets.

The Gold S31 SSD comes in three sizes, 250GB, 500GB and 1TB (with our thanks to SK Hynix for sending us the 1TB model) priced at $49.99, $69.99 and $118.99 respectively; It even comes with a 5 year warranty or up to 600 TBW. Usually nowadays consumers purchase an SSD to install their operating system on and then use external and standard HDD’s for file storage, as they are cheaper and can have much larger capacities, but if you’re only in the market for one then the 1TB S31 is good value for the size.

Putting any storage capacity issues behind us we can now get to the good bits… the specs. Most SSD’s are pretty fast but the Gold S31 boasts some impressive speeds which you will see with our comparison down below.

For you tech savvy folk here is a list of the specifications:

Comes in a nice clean box with just the SSD drive. No bracket or screws were included for installation. We’ll come back to this “possible” issue later when we discuss installation. Hint: it’s not really a “stop the presses” issue.

Here’s a frontal view look at the Gold S31 still in its static protective sleeve but outside of the box.

Here’s a back view of the Gold S31 still in its static protective sleeve. As you can see they put a little sticker on the back asking whether you agree with their warranty policy before opening it. This is the moment of truth, there’s no going back from here.

Holding the drive in my hand, its no different than most other Solid State Drives, at least in terms of overall size.  It’s very light, but feels sturdy and well built. The little black box area with the brand and the nugget are a nice cosmetic touch.

The back of the drive is nothing special, here you’ll find serial and model numbers and the drive capacity listed in the top right. Take note of the beautiful aluminum chassis. If you’re interested in seeing the insides of the drive, and some additional benchmark testing, check out the review of the SK hynix Gold S31 at Tweak Town. They were actually brave enough to brake it open (we were not). A sample of what they found inside:

“Pulling the drive apart, we have the chassis supplemented with a plastic retainer for holding the PCB … The main components here are the DRAM to the left, “Quartz” controller in the middle and 3D NAND to the right” – Tweak Town

I decided to install this in an older case that unfortunately for me had only one place for mounting a 2.5″ SSD and didn’t come with 3.5″ brackets. Being that my boot up drive was already mounted in that one spot, I ran into a bit of a conundrum. Since the Gold S31 didn’t come with an installation bracket or screws, I had to buy a third party bracket from Amazon, the one I settled on and recommend is the Corsair Dual SSD Mounting Bracket. The best thing about this bracket is that it can stack two 2.5″ SSD drives on top of one another, saving room in the case and it comes with mounting screws. Thank god for Amazon, the bracket arrived the next day. Gotta love Prime shipping.

This particular issue is pretty unique to me, most if not all new PC cases have a slew of SSD mounting slots. Some hiding in the back of the case, others down on the bottom near the power supply. I don’t fault SK Hynix at all for this issue, while a bracket would be helpful for consumers with older cases, its not necessary for them to build for older tech. Throwing a few screws in the package would be helpful for mounting to the case however, but how much do screws cost? Pennies on the dollar.

Next, I used the screws provided by Corsair to attach the drive to dual layer bracket (chose the top slide to let the drive breath). Finally, I installed the bracket and drive into my PC’s case and were ready to test this baby out.

Testing for Gold S31 SSD was done with the drive at 27% fill.

Testing for the Crucial MX300 1TB SSD was done with the drive at 65% fill.

This test really isn’t fair, M.2 solid state drives are miles ahead traditional internal 2.5″ SSD’s, but it’s fun to see where the future of the tech is heading. An M.2 drive could set you back hundreds of dollars, especially if you want a larger capacity drive. At the moment, most PC builders are buying smaller M.2 capacity drives (ex. 250 GB) and using them for booting up Windows. I personally have an M.2 for that very purpose and my computer loads up within seconds of hitting the power button. With all that being said, drives like the Gold S31 are the best value “at the moment” for high capacity, fast and dependable drives.

In conclusion, we highly recommend the Gold S31 for it’s fast speeds and size in comparison to it’s equally priced competitors, whilst just being a smidgen cheaper to it’s close rival the Samsung 860 EVO. If you aren’t after a large capacity SSD, maybe you just want your operating system and programs on it, then the 250/500GB versions which come in at even better value are certainly the best to go for in today’s market, though they are exclusively available on Amazon US this year for the time being. Are there better SSD’s out there? Yes, but if you can’t afford them then this is pretty much a no brainer.

The SK Hynix Gold S31 1TB SSD can be bought on Amazon for a fair price of $118.99. We recommend you check it out for yourself, and see what other consumers are saying about it in the reviews, before you decide to buy.

If you liked our review, please consider following us on social media for future tech reviews (our links are in the top right of the site) or subscribing to push notifications below. Let us know what you think of the Gold S31 in the comments section. Are you thinking of buying it? Tell us what you’re using currently.

The Gold S31 1TB SSD gives its competitors a run for their money. While it may not be as fast as an M.2 SSD drive, it compares well with other 2.5" internal SSDS. With a price this good, and performance, we'd be crazy not to recommend people try it out.

wtf! the crucial mx300 obviously STOMPED all over the Hynix in most of the test boxs while only barely, BARELY being squeezed out in just one. Why are all the big reviewers behaving this way? I am so sorry I ordered some Hynixs a few hours ago.