Possibly the best game since Sonic 2

The big-eyed spiky mammal with attitude has had an illustrious career. Sega had a hit on their hands with the original Sonic the Hedgehog twenty seven years ago. Fast forward to 1994 and Sonic was still Sega’s critical darling. In the years since, however, he’s had varying levels of success at recapturing that magic. Sonic Mania Plus, an update to last year’s Sonic Mania, acts as the ultimate sequel to Sonic 3 & Knuckles.

One of our former writers, Alexx Aplin, reviewed the original release. Scoring it a 9, he stated “this is what a modern retro revival should feel like”. My review looks at Sonic Mania Plus as an entire package rather than an examination of the $5 DLC.

More than anything else, Sonic Mania absolutely nails the sense of speed, precision, and momentum that made the original Genesis games such a joy to play. Even looking beyond the tragedy known as Sonic the Hedgehog 4, later games failed to give Sonic the precision that allowed for such creative level design.

Sonic Generations was one of my favorite modern takes on Sonic, though even with that, classic Sonic never felt quite right. There was something off about his physics that I couldn’t accurately describe. It had an almost floaty feel to it. Sonic Mania circumvents this entirely, accurately portraying his 1991-1994 golden years. These tight controls and proper momentum-based physics have a major effect on the game’s design.

The best Sonic games offer expansive, but linear levels. The original mainline entries usually contain straightforward levels that are practically impossible to get lost in. Despite this clear direction, levels are massive, often littered with multiple paths that hide secrets or simply lead to the exit in a different way. Sonic CD abandoned this in favor of labyrinthine level design. You had to put in some leg-work just to find the exit in many of Sonic CD‘s stages. It dramatically slowed the game down.

On the opposite end of the spectrum, more modern Sonic titles suffer from oversimplified level design. A few nooks and crannies off the beaten path may house a shield or extra life, but you’re essentially moving forward the entire time. This creates the issue Sonic Forces fell harshly into whereby the game basically plays itself.

Sonic Mania Plus honors the mainline traditional level-design ethos while expanding upon it. Without the Genesis’ hardware constraints, the game can contain more active on-screen sprites along with with larger levels. Add extra flourishes not possible on Sega’s 16-bit machine such as true transparencies and more complex background layers, and you’ve got a monumental passion project by fans for fans. 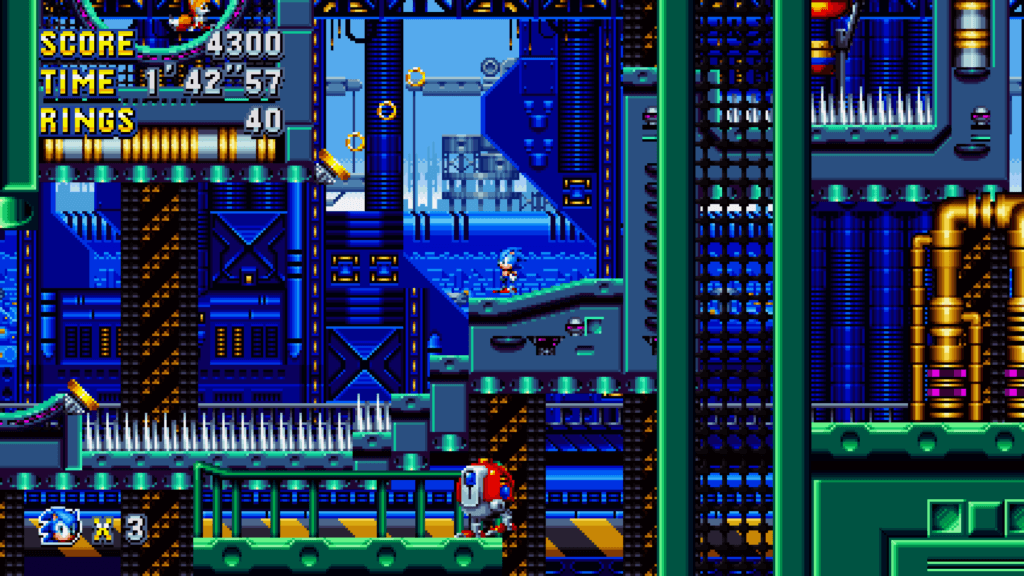 While the core design remains untouched, it adds enough new stuff to make it feel like a sequel rather than a retread. Sonic the Hedgehog 2 added the spin dash. Sonic 3 & Knuckles introduced elemental shields. What does Sonic Mania Plus add? The drop dash. Jump, then press and hold the jump button again. Doing so allows Sonic to speed forward the moment he touches ground. It’s a neat addition that I rarely used myself, but it’s got major potential for serious players. Bouncing off an enemy’s head, then performing the drop dash adds an extra layer to mastering momentum.

Beyond this, returning zones like Chemical Plant feature entirely new mechanics and obstacles such as gooey bouncy gelatin and magnetic-like platforms. Mixed in with classic zones are entirely new stages like Studiopolis, Mirage Saloon, and Press Garden. Despite being brand-new areas with no existing framework or assets to build off of, the new zones feature some of Sonic Mania‘s most inventive ideas.

Thirty seconds into any of these remixed or new stages and you can immediately tell how much fun the team had pouring over this project. Studiopolis may be one of Sonic’s most wacky and unique zones in his history, but it doesn’t end there. The extent to which Sonic Mania Plus re-invents familiar zones is commendable. The ability to make a stage seem so familiar yet so different at the same time is a difficult act to pull off. One which Sonic Mania delivers effortlessly. 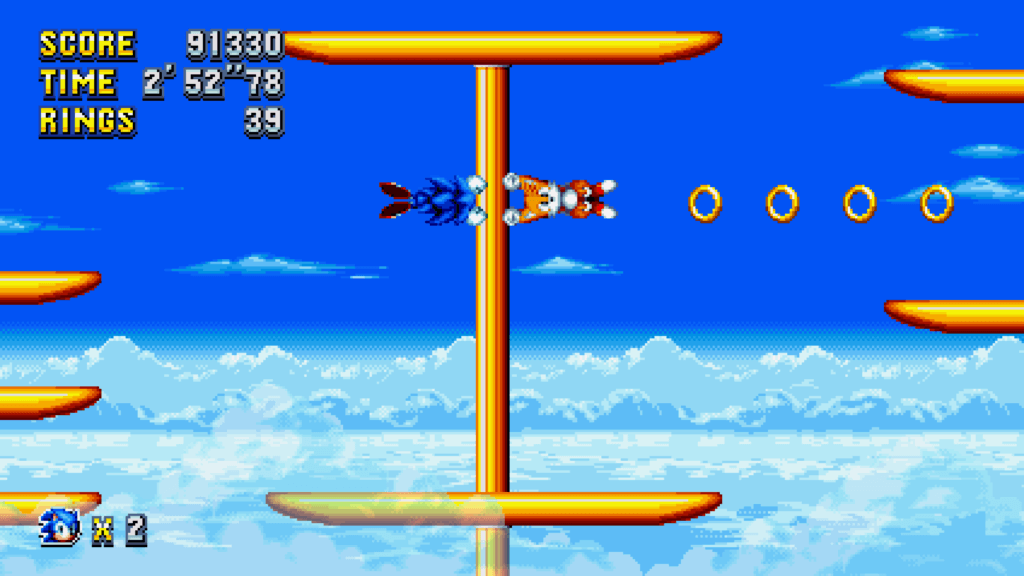 Christian Whitehead, PagodaWest Games, and Headcannon show a deft command of what makes an exciting Sonic the Hedgehog level. A mix of visually extravagant high-speed sections coupled with more deliberate and inventively designed platforming sequences. People nowadays misunderstand Sonic. They think he’s supposed to be all fast all the time; a misconception unfortunately reinforced through the countless modern games that nearly played themselves. Sonic Mania Plus says “fuck that” and sticks to its guns, though it can very rarely miss the mark.

While the high-speed, linear sections are always a stimulating treat, Sonic Mania relies on them a tad too much. A few too many sections of a handful of acts feel connected by a few too many “Put your controller down or hold a single direction” moments. Considering the breadth of the game, it’s not a major issue, though it would have been nice to cut down the automated gotta go fast sections by just a tiny bit.

Sonic was never meant to be fast because it played itself. Remember the original game’s Marble and Labyrinth Zones? It was fast because it featured tightly designed levels that rewarded familiarization. Seasoned veterans could speed through acts in under a minute after memorizing layouts and obstacles, using that knowledge to their advantage, acclimating to the momentum-based physics. Sonic games are so replayable because of this extra skill barrier.

Aside from the slight over-reliance on speed, the final story stage, Titanic Monarch Zone, is a straight up bitch. I died a lot my first time playing the older games in the series, but Titanic Monarch takes the bullshit cake. I can’t even begin to describe how often I called “bullshit” to some obstacle crushing me. It’s also the only zone in the entire game that made me exhaust the time limit, reaching a game over. 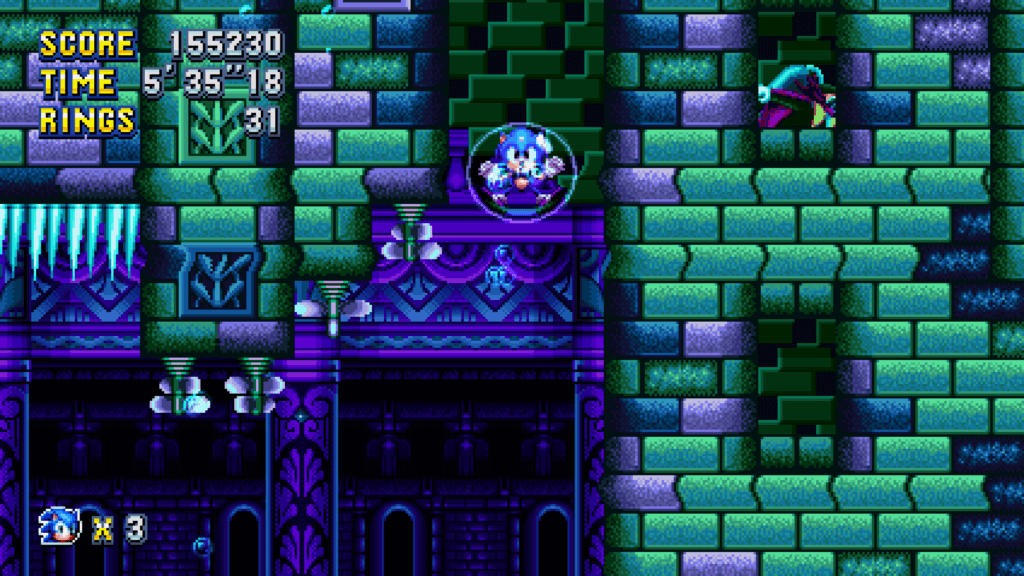 What exactly does Sonic Mania Plus add over the original release?

Of these, the new Encore mode and characters are the most substantial additions. Other minor additions, such as expanding the multiplayer modes from two to four players have been introduced for free in the interim between Sonic Mania and Sonic Mania Plus. 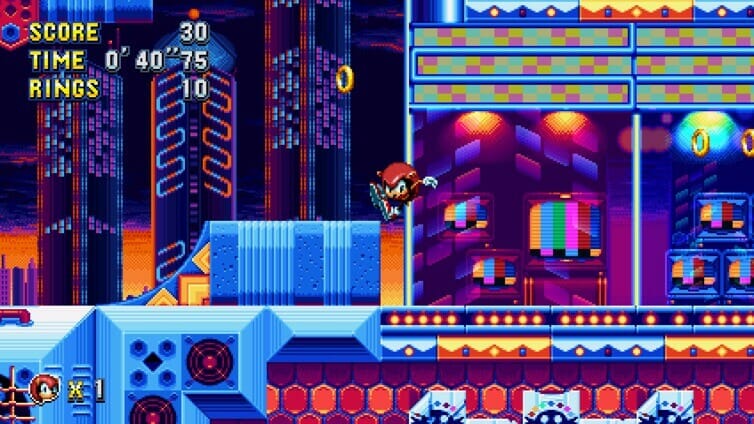 Encore mode features a range of changes, making it feel distinct enough for any players that may have exhausted the original Mania mode. Stages are recolored along with rejigged enemy placements and minor level design tweaks to accommodate Mighty and Ray. Encore mode’s first act is replaced by a snippet of Sonic 3’s Angel Island zone. Mirage Saloon’s first act and boss fight are also completely different from the original incarnation.

The placement of bonus rings have also changed in addition to the bonus stages themselves, featuring different backgrounds and reversed track layouts. The original mode’s checkpoint bonus stages are replaced by a pinball mini-game to accommodate Encore’s new lives system.

Rather than a number indicating how many chances you get, each of the five characters is a lifeline. Players begin Encore as Sonic. After reaching the first act’s end, you’ll be given the choice of partnering with Ray or Mighty. At that point, you can swap characters on the fly. If a character dies, you’ll have to either smash a box containing him or reacquire said character through the new pinball mini-game.

Mighty the Armadillo is the safest bet for most players. His ground pound move, which can break certain floors, replaces Sonic’s drop dash. He also deflects most damage while in ball form. This means even if you ground pound a spike trap, Mighty takes no damage.

Ray the Flying Squirrel, on the other hand, just flies. After jumping, you’ll have to time left and right directional presses to keep him afloat. Keeping the rhythm going while avoiding barriers or enemies is a legitimate challenge. However, because of his endless flight ability, I’d recommend using it sparingly until you’re familiar with the levels. Being able to skip large portions seems a little dicey.

Neither character is definitively better than the other. They offer completely different playstyles and cater to different skill levels, though neither of them feel like half-assed additions. Even if you don’t master Ray’s flight, it’s still fun to glide here and there. Even if you forget to shatter floors with Mighty’s ground pound, he’s still a good safety net for annoying enemies. They’re both useful and fun in different ways. 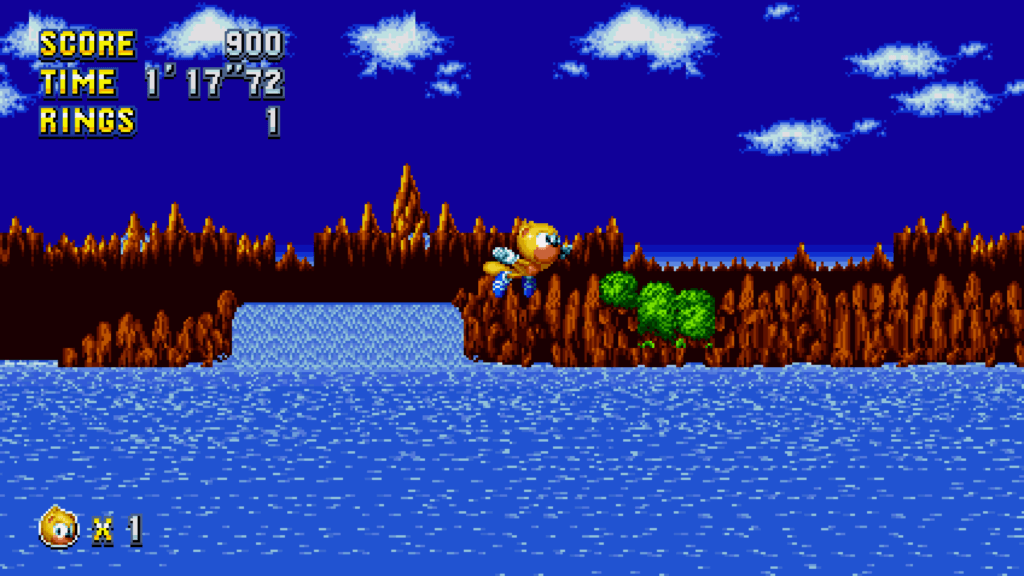 I’d be remiss to review Sonic Mania Plus without mentioning its kickass soundtrack. If you were to travel back in time and play the Studiopolis track to a Sonic fan in the mid-90’s, they’d be asking if you had the hook-up with Sega. Just like the visuals, Sonic Mania‘s soundtrack feels perfectly in-tune with Sonic’s Golden Age. The set list is filled with bangers. It’ll put a smile on that 90’s kid inside you.

Sonic Mania Plus is one of the best Sonic games of all time. This is the direction Sonic needs to continue in if he has any hopes of reclaiming his former throne. Here’s hoping we get a Sonic Mania 2.

Sonic Mania Plus is one of the best Sonic games of all times. Classic Sonic fans NEED to play this.

Casino and video games: ridiculous or the future of virtual gambling?

I've been writing about games since 2013. I'm just here to play games and talk about them, man. 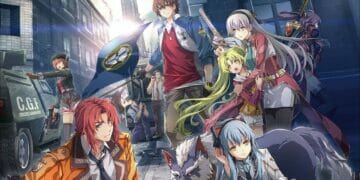 Casino and video games: ridiculous or the future of virtual gambling?