The Lost Child is an interesting dungeon crawler that fails to capture what made El Shaddai special. El Shaddai: Ascension of the Metatron set itself apart through obtuse art direction. Its unique aesthetic coupled with a memorable soundtrack combined to create an incredible experience. El Shaddai had incredibly basic combat, but its visual and audio design made it feel so much grander. The Lost Child is set in the same universe, but with no unique vision, it feels like it’s riding on the coattails of its spiritual predecessor. Hayato Ibuki, a journalist for an occult magazine, finds himself in the center of a plight between demons and angels. A mysterious woman named Balucia saves him from a near-fatal run-in at the subway. She hands him a chained up briefcase, urging him not to open it. Some time after this, Lua, an angel, enters the mortal realm, claiming Hayato as the Chosen One.

With such lofty expectations, Lua finally instructs him to open the case. Situated within is the Gangour, a powerful device that can capture demons. The duo set off on a journey across Japan, investigating mysteries in search of Balucia while saving the mortal realm from demons.

The Lost Child‘s bog-standard narrative set-up does very little to engender excitement. El Shaddai: Ascension of the Metatron explored uncharted territory. Its tale starred Enoch, a character derived from the Hebrew Bible. Set across five distinct parts, the real-life Book of Enoch details his journey through Heaven after the fall of the Watchers, angels who fathered the Nephilim. Gaming so often explores Christianity and Catholicism along with older religious beliefs that have fallen out of favor. Or, as is more common, they’ll follow a non-specific faith, deviating from references to specific figures other than a generic God or God-like figure.

Yet, Judaism is rarely explored to the same degree. As a non-religious individual, I could barely follow El Shaddai‘s story and characters at the time, but that was part of its identity. It was a weird game with a foreign setting to me, but that made it endearing. Released in 2011, El Shaddai combated the rut of brown and grey military shooters that were all the rage last gen.

Unfortunately, The Lost Child fails to realize that essence. Its story and themes feel intentionally hamstrung by a desire to be more accessible. With dozens of worn-out anime stereotypes among the few eccentric characters, one can only wonder where it went wrong.

Fortunately, while The Lost Child‘s story pails in comparison to its big brother, its turn-based combat carves a more distinct identity. Its seemingly traditional gameplay is sprinkled with more character than anything the story itself could muster. On the surface, The Lost Child is a standard first-person dungeon crawler with turn-based combat and demon-capturing that may spark Pokemon or SMT vibes.

The way the game chooses to distribute experience points helps it break away from the genre’s typical grind-heavy nature. Throughout the story and through combat, players acquire differing types of Karma: Evil, Good, and Dual. Karma is distributed based on dialogue choices as well as the kinds of enemies felled in battle. Demons drop evil karma whereas angels drop good karma, for example. 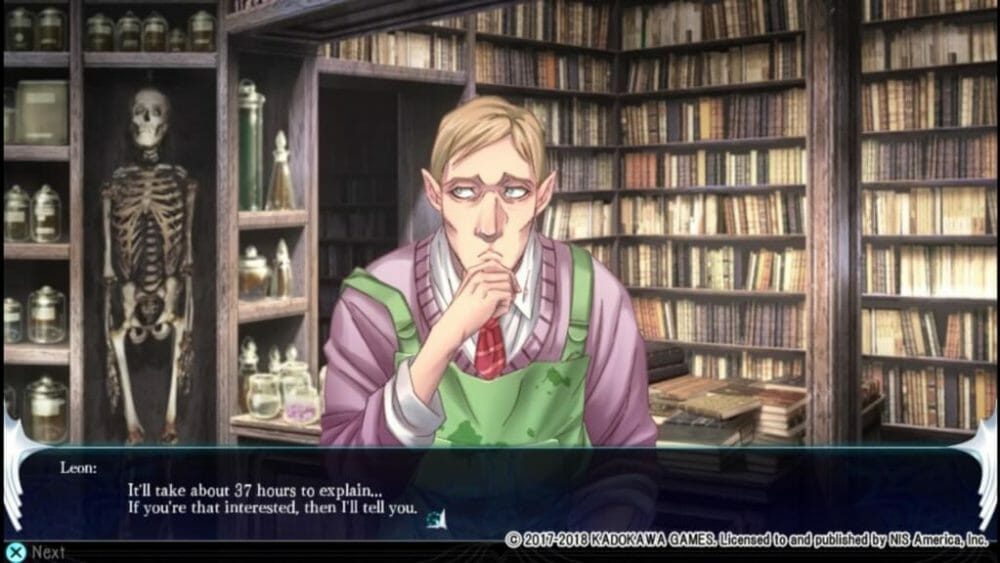 While Hayato and Lua are still beholden to standard experience points, the party’s assigned creatures, known as Astrals, level up through Karma. Rather than automatically receiving a boost, players choose when to power up an Astral in the menu. The karma type used in leveling is vital as each Astral consumes karma differently. An evil Astral will gain more experience from evil than dual or good karma.

This system ultimately puts power back in the player’s hands. A big issue games of this nature tend to suffer from is level-scaling. Maybe you acquired a new demon or party member that has useful skills, but he/she is under-leveled. You know putting in the work is worth it, but it requires a time investment you may not be prepared for.

This karmic system allows players to acquire Astrals at any point without fear of unbalanced leveling. Did you just capture a level 46 Astral? Is it six levels underneath the rest of your party? No problem. Distribute that karma and it’ll be on a level playing field without partaking in any battles. Conversely, maybe you decide to switch the party out just to spice things up. As long as you have enough Karma, you won’t need to revert to a lower-level dungeon just to have a fighting chance at the current story beat. This brilliant system frees up wasted time, allowing exploration to shine.

Past The Lost Child‘s opening prologue that eases players into its progression and battle systems, it lets loose. The first story dungeon doesn’t just give you a glimpse of what to expect later on. It becomes a full-on adventure. Because The Lost Child de-emphasizes grinding in favor of the freedom of progression, it places most of its bets on labyrinthine level design.

Unlike other dungeon crawlers, there isn’t a clearly delineated linear progression from simple to complex dungeons as the story progresses. While the final story dungeon may be the longest main dungeon as far as floor-count is concerned, it isn’t the most difficult to navigate. It feels more like a war of attrition against various trials leading up to the last encounter than a test of navigational skills.

The Lost Child features genuinely engaging dungeons, each with unique gimmicks, mechanics, and puzzles that set them apart aside from their appearance. However, dungeons never grow tiresome because the game strikes a good balance between complexity and ease of use. They’re just challenging enough to explore without feeling like you need to access a guide every half hour.

Unfortunately, the same can’t be said of the game’s puzzles. Incidentally enough, the final story dungeon contains the most reasonable puzzles of the bunch. Most puzzles consist of sussing out incredibly vague phrases and riddles. Some are legitimately clever, making you feel intelligent when you figure them out. It’s too bad those instances are so infrequent. A little more fine-tuning in this regard could have gone a long way as these progression-stilting puzzles halt your flow state. Bring on the RPG

Beyond its karmic system, The Lost Child also features a few hit-or-miss mechanics with hostility acting as one of the core systems. As party members inflict and receive damage, their hostility gradually increases, indicated by an eye underneath character portraits. With hostility at its lowest state, the eye remains shut. As hostility increases, the eye opens and turns from purple to red.

What does this amount to? Party members with a higher hostility level are more likely to be attacked by enemies. That seems like a pretty important thing to remember, right? It’s a pretty significant combat element, yet I played over thirty hours before discovering what it does as I had taken a break from the game for about two weeks to review other games. Once I returned, there was no way to discover what the red eye meant without asking another reviewer (@RealTurniplord) on twitter.

Why did I need to resort to this? The Lost Child poorly communicates information to players. With no in-game index or tutorial, if you don’t remember what a single text box said about a specific mechanic forty hours ago, you’d best peruse the internet. This extends to the story as well as sidequest-like investigations. You may miss a vital clue for progression if you happen to zone out during a conversation. Pay close attention to Lua and all tutorial prompts.

While the game mostly allows a healthy amount of choice with regards to progression, one system flies in the face of that. New skills aren’t learned through conventional means. Rather, there’s a chance for a skill to be learned in combat. While this system can be activated when using standard physical attacks, it’s more likely to trigger when using skills. This presents two major issues:

I played the entire game on a PlayStation Vita. With the game also available on PS4 and Switch, I regret that decision immensely. With games in the past not releasing their Vita iterations in the West due to poor performance as evidenced by I Am Setsuna, I can’t help but wonder why Kadokawa Games didn’t choose the same route. Simply put, the Vita version is a technical nightmare.

With simplistic visuals with low resolution textures and low-poly models within dungeons, this level of performance is simply unacceptable. Menus feel slow and unresponsive. In-game battle animations suffer from immense stutter. To make it even worse, The Lost Child hard-crashed on me six times during my playthrough with the sixth crash occurring during the final cutscene. How did this make it past QA? Even without the crashing, The Lost Child‘s latency and framerate makes it unpleasant to play on Vita.

Avoid this version of the game at all costs. To make it clear, the final score at the bottom of the site reflects the only version I had access to. If you’re playing either of the other versions, assuming they don’t suffer from similar issues, add an entire point to the total score.

The Lost Child is a pretty good game for dungeon crawler fans. It won’t set the world on fire, but not every game needs to. Coming off El Shaddai: Ascension of the Metatron, there’s a lot of squandered potential. Taken on its own merits, though, it’s worth looking into if it piques your interest. Just be sure to avoid the Vita version at all costs.

The Lost Child is a pretty good game for dungeon crawler fans. It won't set the world on fire, but not every game needs to.