This review encompasses episodes four through six of Marvel’s Daredevil: In the Blood, World on Fire, and Condemned.

Daredevil’s nothing if not a series of contrasts. A show about a lawyer-turned-vigilante, starring a blind man who fights like hell – Marvel does something right by its stable of unlikely heroes and it’s only right that he have a worthy (and complicated) dark equal. Matt Murdock’s a man without his sight and Wilson Fisk is a man without a soul in all but the most apparent ways.

While Daredevil’s first three episodes showed us the man behind Matt, it’s In the Blood that introduces us Wilson Fisk’s world, twisted and brutal as it is. Daredevil’s Kingpin is a far cry from Michael Clarke Duncan’s debut as the cigar-chomping, mustache-twirling of 2003’s Mr. Fisk. This Fisk is cultured, calculating, and ruthless, but always a crime boss first than a super villain; mind over muscle as they say, though the latter’s in ample supply thanks to Vincent D’Onofrio’s massive frame. He’s in not in charge of a Wilson Fisk Industries or neon-lighted “Evil Incorporated.” Instead, he’s a ghost who’s enemies would rather impale themselves than rat on him. Yikes. Yet he’s a man too shy to ask a girl out on his own yet unafraid of bashing in a man’s skull with the broadside of a car door. As D’Onofrio put it, Fisk is still very much “a child and a monster” summed up by his insecurities: smart, unforgiving, and inexplicably layered. 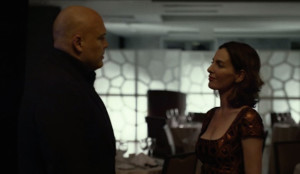 It’s the life of this Mr. Tall, Bald, and Violent that Vanessa (Ayelet Zurer, The Man of Steel) fascinatingly fits into. The charming hostess of the art gallery where we first met our Kingpin of crime, it’s easy to see that Vanessa’s a light to Fisk’s darkness as sure as the hems of their garments (literally black and white) are concerned. She’s a woman bold enough to carry a gun in her purse on a dinner date. And he’s a man privy to sipping champaign while New York burns. Literally. Beneath the surface, both of them betray something deeper than they let on, an unspoken grief they seem to share as a part of something all too alluring. That said, I wish the show didn’t feel obligated to oversell its torture scenes so much as to compromise the quieter, character-building moments it does such a great job at doing.

As the series progresses, there’s seemingly just as much about Charlie Cox’s Matt that we’re unraveling, meanwhile. Almost half way in, Daredevil’s still picking up the pieces and if the series premiere and its first few episodes afterward didn’t seem to fill us in on Daredevil’s abilities, than World on Fire feels like a more proper introduction, in which we finally do get to hear and see more of Matt’s powers along with his view of the world. As Claire Temple says not-so-subtlely, Matt’s “sees so much” in people if not his own shades of his moral compass. Amidst the black and white religious imagery of the pilot, God’s a moral frustration to someone who walks the line as finely as Matt, breaking the law every night while upholding it every day in court. It’s enough to see him stand as still as a statue when he hears the sound of a murder he couldn’t stop to know the different kind of hell that rages inside him.

As A Rabbit in a Snowstorm promised us, no one in Matt’s life is safe and this time, it’s Claire who plays damsel courtesy of the Russian Mob in what I can say is a bloody daring performance on Rosario Dawson’s part. Between his Spider-man in the rain scene with Karen Paige and now his cloak and dagger meetings with Claire, it’s uncanny how many battered women Matt ends up saving and making romantic connections with, maybe all too soon for the fake name basis that the two were on. I do appreciate a series where smart characters are smart enough to unmask a superhero in their heads and Claire’s one of them, though I do hope her and Matt’s relationship evolve more beyond the “save me” convention. 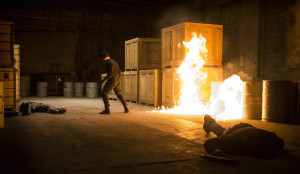 Fans of Frank Miller and Brian Michael Bendis will no doubt enjoy the growing intrigue and grit of the show’s Hell’s Kitchen, which Fisk proceeds to light up in all the hellish imagery of the series’ namesake. The grim spectacle of Batman: Year One reverberates strongly in the three-pronged battle Matt wages against the cops, the mob, and his own morality. How long Matt can simply “run through the city punching people” until he can get to Fisk is something that’s fair to consider, or just how long he can afford taking prisoners in his little war on crime.

It’s Fisk’s Fourth of July attack on the Russians that sees Matt trapped with a most unlikely suspect amidst a gang-fueled inferno: a wounded criminal who I didn’t imagine could still help open grates on his own. Punishing lives and saving them is a different task all together for Matt, and though their fates are honest for the series, it very righteously evokes (in the manner of Batman Begins, again) the fact that though Matt won’t kill anyone, he sure doesn’t have to save them either. 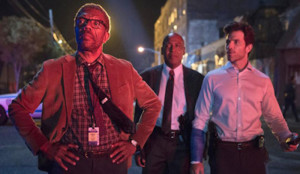 It’s cool that a street level hero like Daredevil isn’t above telling street level stories about its ensemble cast. If Foggy (Bear?) and Karen are becoming Daredevil‘s unassuming dynamic duo, than it’s nice that their scenes in our last two episodes go beyond just banter, of which they steal the very best lines of the show. Elden Hanson and Deborah Ann Woll feel like they must be clearly enjoying themselves and they certainly have the adorable spark between them among our episodes’ collection of awkward dinner dates. It all complicates their mutual friendship with Matt while beautifully building up their own dynamics. Meanwhile, it’s Vondie Curtis Hall’s Ben Urich who’s slowly beginning to tie the series’ political theater together in an offhanded manner that recalls The Wire or your typical CSI. Yakuza, Triads, the Russian Mob – there’s a very tangled web Daredevil’s weaving that everyone’s being roped into. 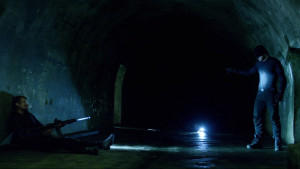 That Daredevil‘s technically a TV show – or however you might qualify a streamed Netflix series – isn’t much of an excuse for its pedestrian cinematography in an age of Breaking Bads and Walking Deads. The increasingly tired shots, most of all from the car window of a blind man (ironically), do nothing to beautifully complicate the action like Sherlock, though at least they give us a good look at it unlike the cut-happy fights of the Dark Knight trilogy, if not blandly. Though there’s no Cut Man to be found among these episodes, there’s still plenty to love. In the Blood‘s shadowy takedowns wreaks of Rocksteady Studios’ Batman Arkham games in the best ways and Condemned may feature the most ingenious escape artistry ever from a handcuffed man. But the camera people? Someone should wake them up.

It’s not hard to see Matt and Fisk as kindred spirits of sorts – both outcasts having made the most of themselves for what they were given. And maybe Fisk would agree. Their first “meeting” of sorts is a chilling one just through dialogue. “We’re a lot alike, you and I” he says to Matt over a radio. “I have a great deal of respect for one man who thinks he can make a difference.” “We are nothing alike” Matt claims in reply. But how firmly that line’s drawn isn’t any clearer by Condemned‘s end, nor is it by the time another familiar name to comic fans surfaces from the lips of Matt’s prisoner: the fear-inspiring Leland Owsley. How afraid we (and Matt) have to afraid of that name remains to be seen, but in a city already owned by Fisk, the night’s likely going to be getting a lot darker before the dawn.

All thirteen episodes of Daredevil are available for streaming through Netflix on TV, PC, tablet, mobile, and game consoles. Check back next week for our review of episodes 4-6 here at BagoGames.

Of Men and Monsters | Daredevil: Episodes 7-9

[…] in the present day, everyone’s feeling the fallout over the explosive remapping of Hell’s Kitchen, Karen and (Señor) Foggy most of all. Their efforts to combat the Kingpin’s mass evictions […]