In case you have not seen DreamWorks’ new animated feature about a snail with a supercharged rocket in his shell then you are in for a very small treat.  The movie ‘Turbo’ is about a snail named Theo who aspires to be a major Indy 500 champion just like his idol, Guy Gagne.  Well, after a freak accident from getting sucked into the supercharger of a drag racer, his DNA mixes with the gases within the car’s engine and Theo, AKA “Turbo”, wakes up the next day with increased speed, reflexes, eyes like headlights, etc.

I decided to take Turbo: Super Stunt Squad for the Nintendo Wii for a spin.  The Wii version of the game was developed by Torus Games and was published by D3Publisher.  The game screen fired up with a pic of the town the movie was set in which is Venice, California and you’re greeted by a heavyset snail who says a few quips here and there.  The choices for modes of play are Tournament, Quick Play, Multiplayer and Time Trial.  I decided to try the Quick Play first using the Wii remote turned sideways which I quickly found to be a big mistake.

I found myself driving off the track and into the abyss several times and using the minus button to respawn just put me off somewhere else I did not want to be.  Therefore, I plugged in the nun chuck to the Wii remote and things were a lot better.  Using the NunChuck control stick makes moving the snail a lot easier and using the Z button to accelerate just felt natural and having the c button right above that to brake was perfect placement.  This freed up the A button for control by my other hand which made things much more smooth when going off jumps.  While going off a jump the directions said to press left quickly on the cross pad to gain a stunt/speed boost tomato which gives you a quick boost while on the ground or doing stunts.

Pressing right on the cross pad rewards you with a taco that creates a circle of tacos around you so that opponents cannot knock you off the track.  If you press down on the cross pad while in a midair jump, you get a saltshaker that slows down other racers behind you.  The real problem I found with doing tricks while in mid-air is that if you move the cross pad too fast in one direction or try to land perfectly after doing a midair trick you will either nosedive, crash and roll, or you’ll land on your shelled behind.

Some other problems I ran into were poor control around tight corners and that was even when using the drift button. Respawning was also a problem if I was stuck somewhere because once I respawn, I didn’t not know if I’d be dropped behind the other racers, dropped in the same spot, or dropped way behind everyone else.

Your best bet for choice of controls in the game is the Wii remote and Nunchuck combination.  However, overall, the controls in this game leave a salty taste in your mouth and I do not mean in reference to snails or slugs. 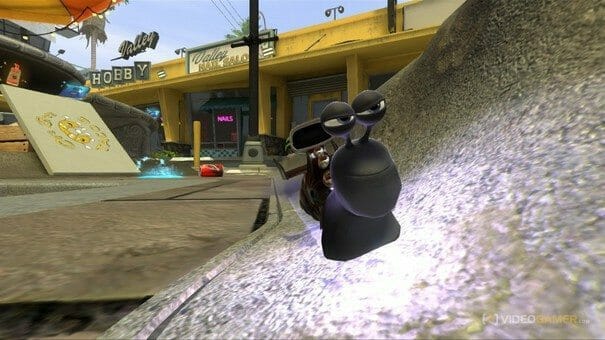 Turbo: Super Stunt Squad’s graphics are fair for a game based on a movie.  The various movie locales set up as race tracks were clever but seemed pretty on par with those in a Flash or Android version of the game.  The shell designs on the snails were not fantastic and the unlockables such as new shells or stickers do not add much flare to the very bland look of the game.

The various movie characters appear and sound exactly as they do in the movie with their own personalities and abilities matched in the game.  Each track is suitable for everyone from beginner to advanced racer and jumps and shortcuts are placed in very fun and useful places.  Kids will enjoy the mix of the movie music, characters, and challenge of the game. The sound in Turbo: Super Stunt Squad is at a nice comfortable level for a game geared mostly toward children who have seen the movie.  Each character will say a certain trademark phrase from the movie, which can get old very quickly and even some of the music from the different tracks can get very grating.  If anything, the sound effects in the game were very limited and more exciting race type style sounds could have been more prevalent. Turbo: Super Stunt Squad, just to be clear, is a racing game.  This Wii version is different from its cousin on the Wii U, which is geared more towards Tony Hawk style performance play.  For those expecting a rich racing experience like in Mario Kart where you can drift and perform stunts while still having tight and precise control of your vehicle, then Turbo: Super Stunt Squad is not your game.  Turbo: Super Stunt Squad is definitely suited for the younger gamers who saw and loved the movie, can take on a challenge, have a lot of patience, and can look past the generic kart racing game that so many other games try to be when compared to the Mario Kart Series.  This is one movie-based game where the hero should stay in the movie’s race, away from the console tracks, and aim to win.

Turbo: Super Stunt Squad is rated ‘E’ for everyone.

Review copy provided by the good people at D3 Publisher