Sam Mendes Throws Us Into the Trenches with an Intense Experience

There’s a debate that has cropped up in the last month since the first screenings of 1917 and it’s an argument fairly familiar. It harkens back to 2015 when there were two camps in the criticism of Mad Max: Fury Road. The most positive reviews praised the gorgeous visuals and detailed action sequences while the most negative criticized the film for being little more than a chase. 1917 falls into the same camps once more, where the love or hate depends on how heavy the atmosphere weighs on the audience. And for a film that wants to be the most alluring of grand-scale war pictures, this one won me over.

As you may have expected from that description, 1917 has a fairly simple story to carry its style. We follow two English soldiers in this tale of World War I; Lance Corporal Will Schofield (George MacKay) and Lance Corporal Tom Blake (Dean-Charles Chapman). They’re given a task by the higher ranks of delivering a message to a trench on the other side of the battlefield. There’s a surprise attack being mounted by the Germans. If Will and Tom don’t make it in time, an entire group of soldiers will be slaughtered.

We don’t know too much about Will and Tom past the basics of their drive. While Will has a classic devotion to the army, Tom has a brother in the trenches he’s heading towards. There’s just enough reason for one to hurry while the other catches up. But they’ll have to tread lightly as they traverse a dangerous battlefield of mines, German soldiers, and forces of nature. 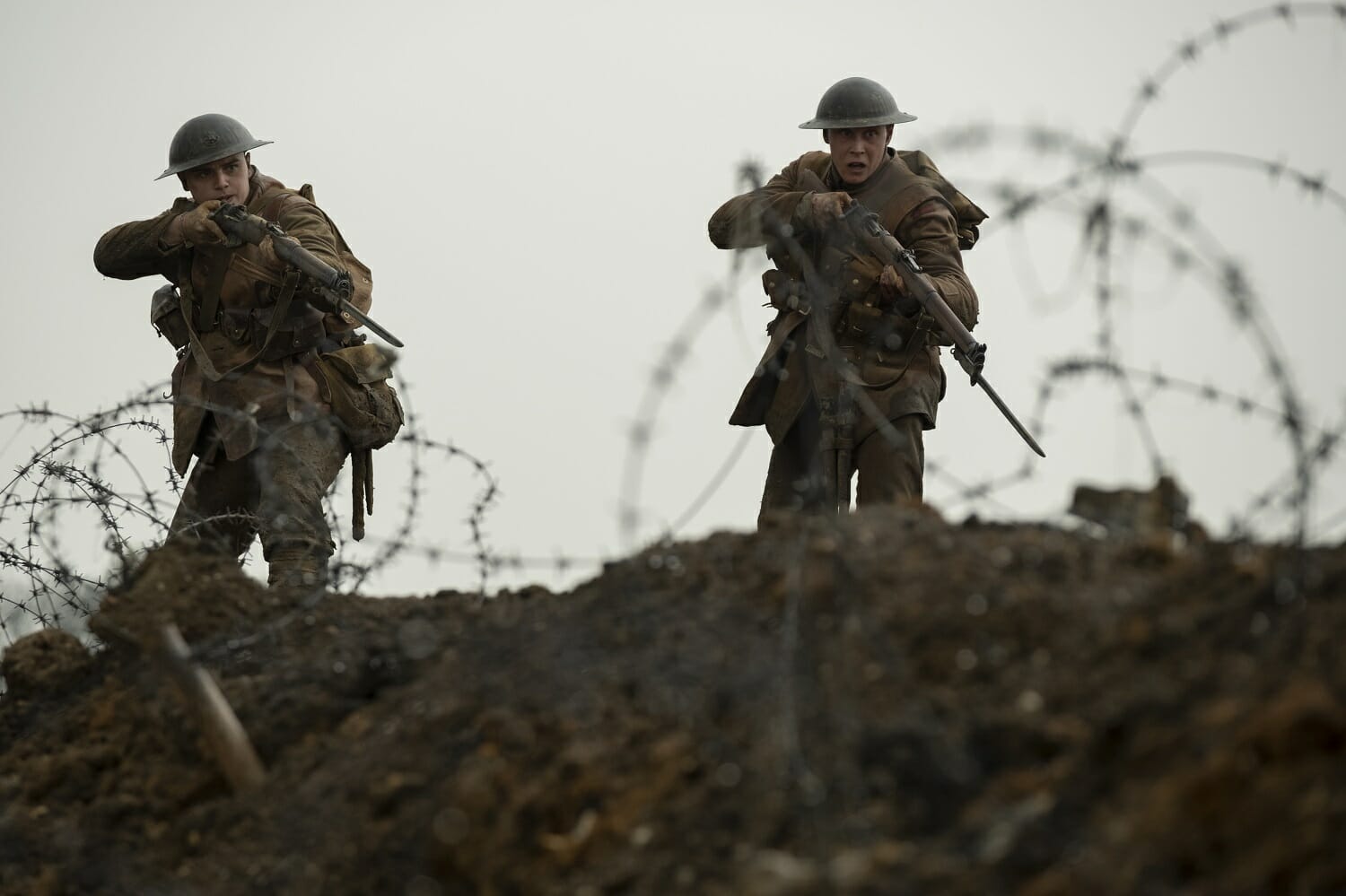 With cinematography by the legendary Roger Deakins, 1917 is an absolutely gorgeous film for one drowned in mud, fire, and barb. I expected as much that Deakins would deliver on some unforgettable shots with fantastic blocking. What’s more impressive is that all of these fantastic shots are housed within a staged one-shot film. The entire journey, from the moment Will and Tom are called upon to the completion of their task, the camera never stops following them. We follow them everywhere from the vastly empty fields to the close quarters of a military transport truck.

Watching this film felt like watching one of those visual effects marvels from the 1990s where a question always lingers: How did they do that? For example, there’s a scene where Will climbs into the military truck and has a moment to breathe. We take a breather as well after all the intensity. But look where we are! The camera seems to be plopped right on the shoulder of one of the soldiers. While there are plenty of spots where you can see the seams stitching this one-shot marvel together, there are just as many that had me astounded by the assembly. 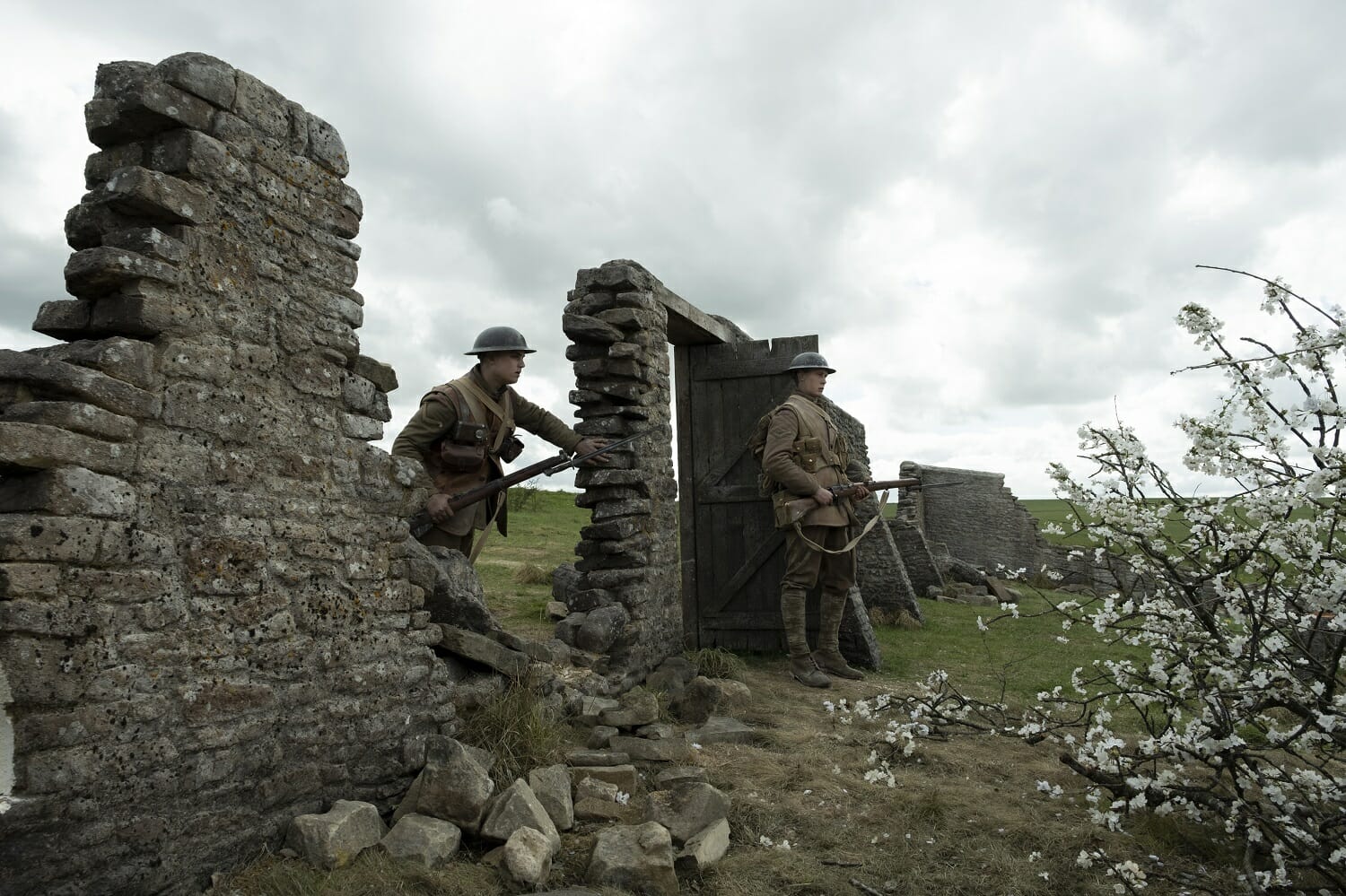 1917 walks a fine line between being a nerve-wracking thrill ride and a tragic tale of the tolls of war. There’s a great foreboding nature to every scene. Consider how during the first ten minutes, we’re mostly being brought up to speed on the mission at hand in a dump of exposition. But listen to how the music engages and slowly builds to let us know danger is afoot. The terror of their journey seems to be stressed more and more that by the time the duo make their first leap out of the trenches, we hold our breath. And that breath continues to hold as the character watch their step. One false move and it’s all over.

The film takes great advantage of the war environment to create a frightening atmosphere. One of the most colorful scenes features Will rushing through a burning city at night, caked in an orange haze of smoke. There’s a moment where he can see a figure in the distant smoke. We don’t know if it’s an enemy soldier. Neither does the shadow staring back at us. Only when we peer closer does the fight start again as Will runs for his life, seeking a temporary break with a lone mother hiding her child.

The natural criticism of such a picture is that it never really deviates from the expected. This film is fully locked on the rails and it doesn’t really deviate in terms of what the characters will go through. Will and Tom are as much bound to war movie cliches as the camera is to the dolly tracks. They experience moments of tragedy and catharsis in all the right spots for such a picture to move general audiences just the right way. It becomes a little easy to see the strings being pulled when they talk about their family back home which they may not see again.

There are a few small roles in the film for such big names as Colin Firth and Mark Strong but they’re merely just cameos. The real star of the picture is without question the presentation. And that presentation is at its finest in the scene where Will makes a dash across a battlefield, running into soldiers and explosions along the way. How that shot was assembled with so many extras and explosions going off around the actors in all one-take is a true feat of cinema.

1917 is one of the most engaging and ambitious war epics for its filmmaking alone. While it never quite elevates itself past the stock characters, it sings beautifully with style and assembly that places us right in the trenches. Sam Mendes has crafted a real marvel of a movie that gives good reason to see it in a theater to feel just as confined and on the edge of your seat. Few war films ever feel this massive in scope and it’s refreshing to see something this grand still has a place at the cinema.

What did you think of 1917? What’s your favorite war movie? Was Jojo Rabbit one of them? Let us know in the comments below.

An intense, engaging, and gorgeous experience of a war epic.