I love quirky, weird, and interesting games. I harken to the past generations when games were made for entertainment and not just a quick buck. Those times are almost completely behind us, but there are a few developers that are keeping that tradition alive; Tango Gameworks, Atlus, and Platinum Games are examples. When those games are released, I run to my store or order them immediately online so I don’t miss out. As a result, I always jump at the chance to review a goofy, off the wall game. When I said I’d review Senran Kagura 2: Deep Crimson, I really had no idea what I was getting myself into. To say that this game is nothing more than softcore pornography is a little rough, but I worked at Hooters for five years, and I swear I watched more boobs jiggle in the first hour of this game than I did during that time. What made it worse was the fact that my copy is on the 3DS, so I got all the boobs jiggling on Nintendo’s family friendly handheld. Under all the boobs, however, there is a good game with a lot of content, but I figured I would warn you all of the mountainous cleavage you would be privy to.

The game’s story is a fairly simple one. There are two Shinobi schools; the evil school, Hebijo Clandestine Girls’ Academy, and the good school, Hanzo National Academy. They are constantly squabbling and warring with each other, as what good and evil sides typically do. This time though, it is different; Hebijo has stolen Hanzo’s Super Secret Ninja Art Scroll, and the Hanzo students want to reclaim what is rightfully theirs. As you view the Hebijo school, you are introduced to the five female protagonists; all are unique in their own right. There is Asuka, the rich girl trying to prove to everyone that she will be a Shinobi based on skill, not money. Ikaruga, who everyone calls their “big sister,” because she is calm and mature like a true leader. She wields her family’s heirloom, a huge sword named Hien. In her first year at the school, Yagya stands out with her eye patch and is tough enough to go up against third years. Next is the student who feels it is her fault the scroll was lost: Hibari. And finally there is Kat, the pervy one.

The controls are extremely simple; think of this as an erotic Dynasty Warriors game. The Y button is light attack, X is hard attack, and B is jump. When you push up on the D-Pad,  your targeting system locks onto the nearest enemy. The targeting system isn’t that great though. I found myself locked onto an enemy, but I was still swinging the complete opposite direction she was. The Right Trigger allows you to dash forward to attack more swiftly, and if you are feeling overwhelmed, you can hold Left Trigger and an attack button to start a special attack. Playing with all five of the characters was pretty easy, but the only one that gave me trouble was Kat. Instead of having a traditional weapon, she uses her feet and “hover boots” to attack. That gave me a lot of trouble, especially with the flying enemies. Other than that little hiccup, I didn’t have too much trouble besting all of the ladies.

The animations, graphics, and backgrounds are all very nice. They’re not boring and don’t repeat themselves over and over, but you really won’t be paying attention to them. It is very hard to take your eyes off the huge breasts that are always on the screen; not only do they defy physics, but they jiggle at the slightest breeze. Nintendo’s 3DS really helps with the distractions too seeing as you can see the boobs wobbling around in 3D. The graphics team did do a great job at making the female form; I found this out when I first started to play and was attacking the female enemies. Their clothes fly off by how much damage you inflict. When you fight the bosses and hit them enough times to drop their health. you will get a slo-mo scene of some of their clothes ripping off: pants, shirts, undershirts, and the like. The same thing happens to your character should you get hit too often as well. When you win the battle, your character goes into a victory pose and should there be a need to ogle your character, you can hold the Right Trigger and move the 3DS to inspect your scantily clad hero.

Oddly enough, there is a lot of content in this game. You have the main game, which is the normal campaign, and then lots of other additions. After you beat a mission, you can take a Shinobi girl to the Ninja Room. There she can talk to other classmates to find out more about them. She can fight other Shinobi girls online or locally with the 3DS as well. In the room there is the standard “save” option in the Records area, and the settings where you can adjust voice volume and the like. Then there is the library, where you can watch unlocked movies, listen to the characters voices, look at pictures, listen to the game’s music, and of course, check out the all important statistics. Sure, some of this is just like stuffing tissues into an empty bra, but the online and the campaign did keep my attention, much like a full bra.

Oddly enough, the game is pretty good seeing that it’s really just a highly erotic Dynasty Warriors. It definitely isn’t for the faint of heart or the easily offended; those people won’t be able to stand it. If you’re open minded and laugh a lot, you will enjoy this game; there’s a lot of boobs jiggling and sexual innuendos. The controls are good, the story is semi-decent, and even though it’s no The Last of Us, it drives you to get that darn Ninja Art Scroll. If you’re looking for a laugh, you need to get this game. If you hate boobs, this game is not for you.

A 3DS review code of Senran Kagura 2: Deep Crimson was provided by XSEED for this review 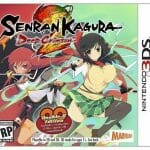 Gamers In Beta Podcast 120: Half a Wind Sock

[…] first experience with this franchise was last September on the 3DS. I was tasked with writing a review about this game, and man was I ill prepared for what I encountered. The series is a voyeurs dream. […]