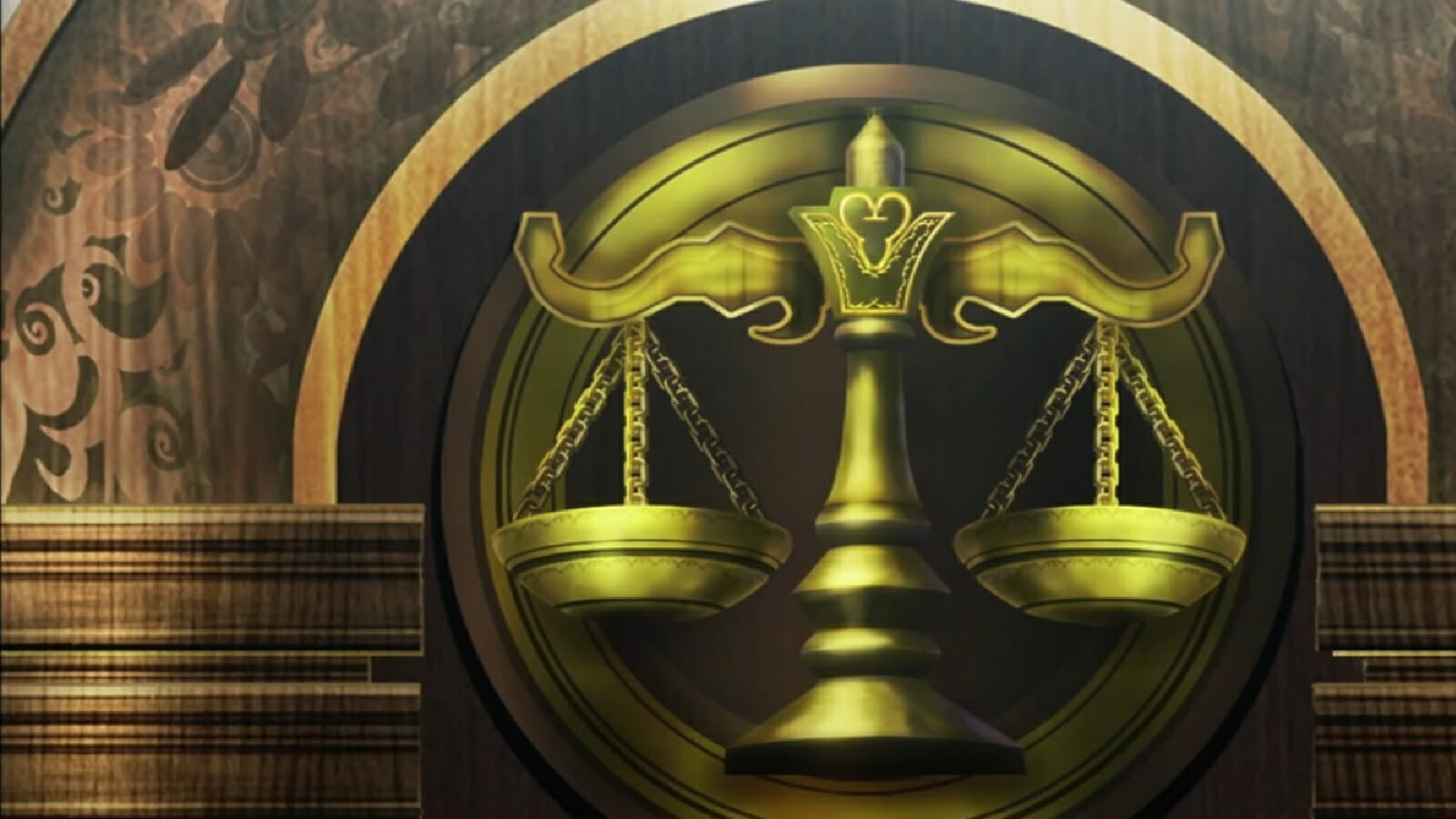 The Ace Attorney games are so entertaining that fans of the franchise had high hopes in regard to the anime adaption. Sadly, the anime as an entirety offered little else to Phoenix’s story. As each story arc ended and disappointment settled in, I waited patiently for the real story to begin. Even with the sadness of this adaption fail, I’m still happy to have at least finished watching the anime in it’s entirety. Farewell, My Turnabout Last Trial is an episode that wraps up the entire anime well. The more lovable characters come together to help Phoenix in his most dire hour of need. De Killer is more than ready to dispose of Maya in order to protect his client Matt Engarde.

If the audience ever felt the court scenes in Ace Attorney were ridiculous, they will be completely confused with this last trial. Shelly De Killer a notorious assassin upholds a strange yet strict moral code that can not be broken. He agrees to appear in court in the form of a radio in order to testify in favor of Matt. Even though, you know in your heart that Maya will be freed from an early death, it’s easy to feel the pressure Phoenix is under while contemplating how to to bring the trial to a close.

One of the few problems that arise is the lack of screen time for Maya and Pearl. Maya is only heard through the radio briefly and doesn’t really take part of this episode until the end.  While Pearl’s still somehow managing to channel her deceased cousin Mia after a couple days. One would believe channeling another person would place a great strain on the little girl.

The animation style is consistent with the rest of the series, which is slightly bland in comparison to the game franchises. The more simplistic lines of the facial expressions make the characters appear more comical than serious at the intense dramatic moments, especially Miles’ expressions; his simplistic facial expression makes him look rather ridiculous.

However, the tone of his voice actor is amazing along with Phoenix’s and the rest of the cast. One great quality this anime has been consistent with is the voice cast. Everyone has channeled their character’s emotions, heartaches and ridiculousness extremely well.

Franziska’s return as an aid to Phoenix is a pleasant surprise. The video CD that incriminates Matt in the eyes of De Killer is the one piece of evidence that is enough to turn around the entire trial. Franziska’s statement towards the end that she felt that she HAD to give the CD over to Phoenix is a sign that the heiress to the von Karma family is changing. It’s as if she wants to reconcile for her previous behavior in some way. Despite her using the famous von Karma wipe at the end, she does appear to be working towards a much better future for herself.

This final episode wraps up all of the previous fights between Miles and Phoenix (not to mention Franziska) while bringing their friendship back to the surface. Maya is returned to her friend and cousin and Franziska takes off on her own self-discover journey. With Phoenix’s speech at the very end, the audience receives the absolute result of his trials. He is moving on from his amateur days and into his true professional career working for the absolute truth. It is a befitting way to end this series and gives hope that the franchise is also moving towards a new future along with the most entertaining and heartfilled defense attorney.

You may find the Ace Attorney anime series through Crunchyroll.

The Most Popular Video Games of the 1980’s

The Most Popular Video Games of the 1980's