My Episode 1-6 Impressions on Uzaki-chan Wants to Hang Out!

Uzaki-chan Wants to Hang Out! Is an interesting light-hearted comedy in a sea of great anime this season. It’s anime that’s been quite popular this season (for obvious reasons) but also one with many flaws.

The first episode had a weird dynamic that was hard to follow, and seemed more like a bunch of shorts stitched together. We’re vaguely introduced to the two leads Sakurai Shinichi and his meddling and troublesome kohai Uzaki Hana. We know the two have known each other since high school, but that’s all we are ever given about their past relationship.

At first, the pair comes across as “an uninspired loner who has an annoying junior constantly bugging him”, but in later episodes, you see them subtly getting closer together and forming a friendship with some inevitable romantic undertones. Coming into Uzaki-chan, you shouldn’t expect too much in terms of comedy, it’ll be the same thing any seasoned anime fan has seen in thousands of other series. The anime knows this, yet it doesn’t try to distinguish itself from them, the humor is also exactly as you see it. Uzaki is a girl with disproportionately large breasts. You know this, the anime knows this, it’s literally written on her shirt, so a lot of gags are made about it in many episodes.

The comedy isn’t clever whatsoever and doesn’t try to be. Once you understand this, you can enjoy it for what it is, just an anime with light-hearted and predictable ecchi moments you can turn your brain off and enjoy. Which is something I appreciate as long as it isn’t borderline trash. Episode three introduces Ami, the boss’s daughter and Shinichi’s co-worker. She and her dad enjoy watching the pair and their hilarious hijinks and prefer not to meddle in their affairs in a weird but understandable manner. 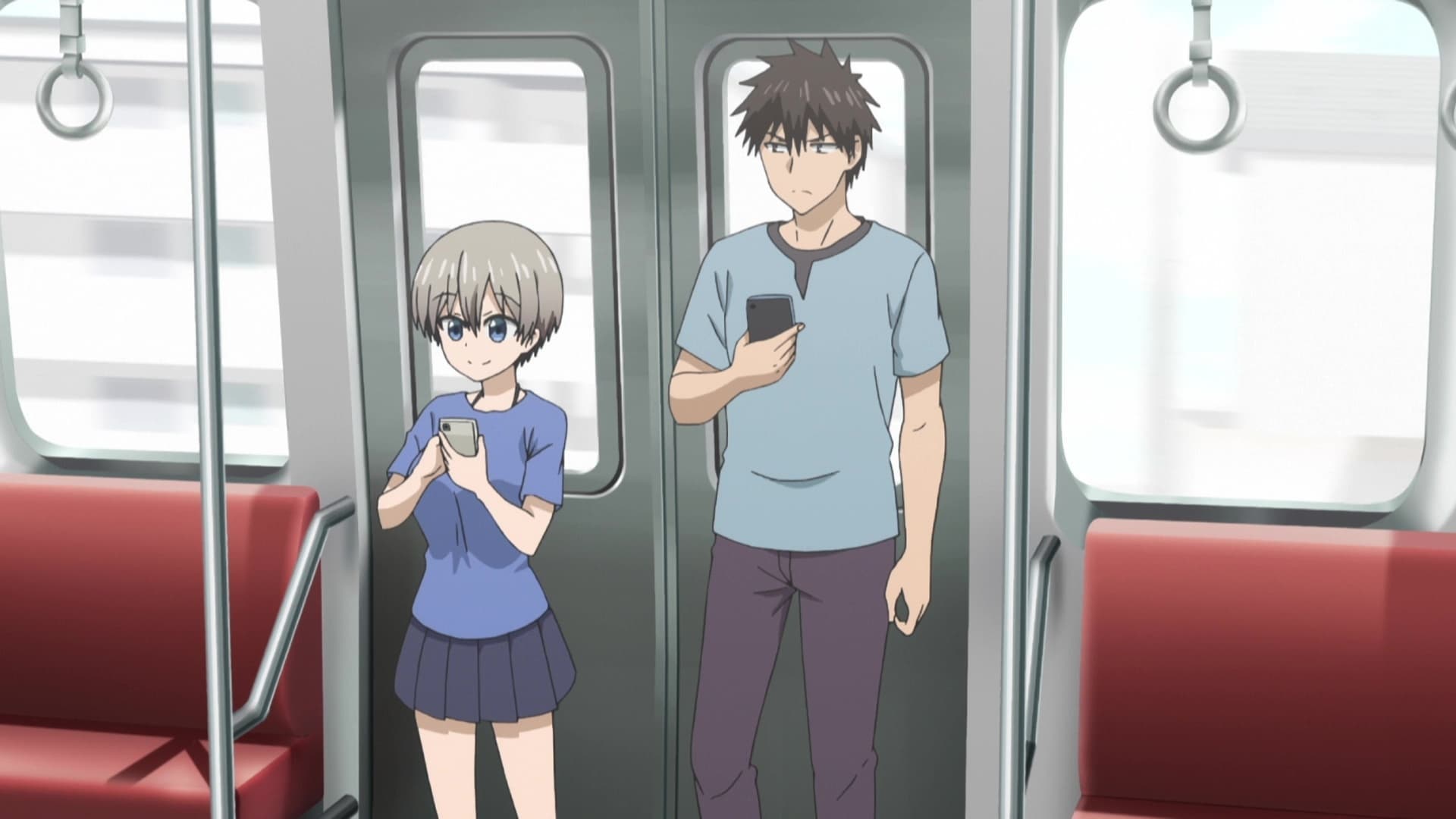 In episode four, its golden week and Shinichi, true to his generic character, wishes to spend all of his holiday time at home playing videogames, until an annoying Uzaki-chan comes over to bother her senpai yet again.

While the dynamic is the same as ever, the episode shows viewers as the two spend more time together, Shinichi starts to enjoy his time with Uzaki. Like a parasite worming her way in, the relationship becomes a symbiosis, he enjoys her company and her he’s. The episode also shows a bit of growth in Shinichi’s side through his warm and friendly attitude towards Uzaki by the end of the episode giving viewers the slight hope for this ship sailing.

Episode five starts with the usual tomfoolery we’ve learned to expect from the series. Shinichi sleeps in a class, and Uzaki makes fun of him for loudly waking up to a bad dream, which was in theme with the lecture’s subject of dream interpretation.  After that, we’re introduced to Shinichi’s friend Sakaki. He quickly takes a liking to the pair’s relationship and becomes determined to hook them up. In contrast, Ami (who’s also in the same college as the three), who prefers to watch the pair from a distance, disproves this. An argument unfolds between the two while a nonchalant Shinichi overhears the conversation in annoyance.

Things then takes a surprising turn as we learn that Shinichi has never had mint chocolate ice cream due to his childish distaste for mint toothpaste. This prompts Uzaki to make a surprisingly long and in-depth speech about the history of mint chocolate and its favorable qualities. While the scene came out of nowhere, it succeeded in putting Uzaki in a different light to previous episodes, which was interesting to see.

Episode 6 is the inevitable beach episode which is to be expected for an anime like this. The episode unsurprisingly focuses on Uzaki Chan and her boundless bosoms in a swimsuit setting. Shinichi, Uzaki, Ami, and Sakaki decide to spend a day at the beach where more comedic hijinks ensue at the expense of Uzaki’s boobs and Shinichi’s intolerance for scary things. Sakaki persists in his goal of driving the two together by any means necessary and tries to force them into various situations because of this. The episode fails to be more than just another generic fan service beach episode in its usual format.

Overall, I’d say Uzaki-chan is an anime that can be taken at face value. Its humor is crude and predictable, and its main characters form a budding relationship at a glacial pace. However, I would like to give credit where it’s due and say that while at a snail pace, there does seem to be some development after each episode, and for the times when the humor works, it works really well. Other than that, I’d say Uzaki-chan knows exactly what kind of anime it is and owns it, and while the anime sorely lacks any depth, one can at least admire that.

Uzaki-chan Wants to Hang Out! is available to stream on Funimation right now.

Have you seen Uzaki-chan Wants to Hang Out!? If so, what do you think of it? Let us know your thoughts in the comments section below.

Should Video Games Strive for Realism?

[…] anime also follows the typical rom-com format in manga where characters undergo multiple events together in a single episode, such as shopping […]