I’m a big fan of Shūzō Oshimi’s works. Not many manga creators uniquely use their art to emphasize the characters in a story the way he does. Many of his titles, such as The Flowers of Evil, Drifting Net Cafe, Happiness, and most especially, A Trail of Blood, lures the readers with a false sense of security with characters and their normal day to day activities. However, there’s always something creeping beneath the surface.

I wish I could say the case remains the same for Oshimi’s other title, Inside Mari. While it is to some degree, the manga’s first volume’s volume only succeeds at introducing the characters and the overarching premise. This definitely isn’t a lot for a volume, but it does its job excellently.

Inside Mari follows Isao Komori, a 21-year-old depressed loner with not much luck making friends let alone forming a love life. After an epiphany, he drops out a college and becomes a shut-in who plays video games all day. Aside from that, one of Isao’s few pleasures in life is going to his local convenience store and stalking a high school girl named Mari Yoshizaki (yes, it’s that kind of manga) until one faithful night after stalking Mari, he wakes up the next day in her body. We are given no warning or cause of this, just that he is now in the body of the girl he admires and will now have to walk in her shoes (literally) and live her life so as not to cause suspicion.

Understandably, he does this quite poorly and is easily found out by a girl in Mari’s high school named Kakiguchi Yori. The thing about Yori is that she too seems to have some feelings for Mari and comes off as a stalker. Due to this, she’s understandably hostile and abusive towards Isao, who’s taken over Mari’s body. After some verbal and emotional abuse, the two decide to find out what has become of Mari. 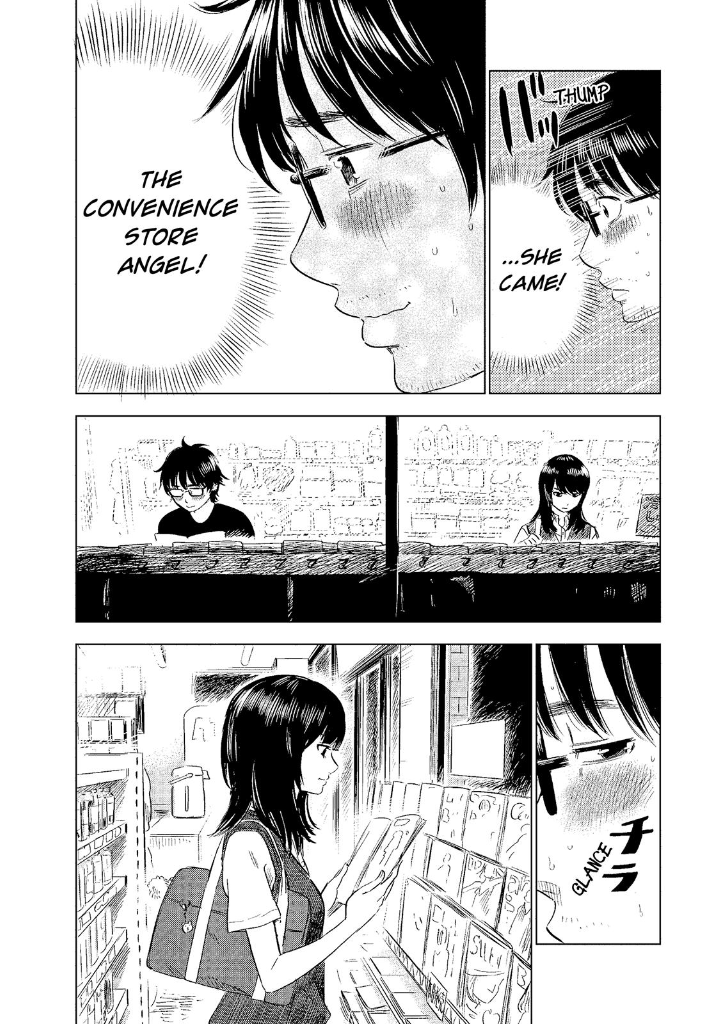 Not much else happens in the volume other than Isao trying to understand and come to terms with his current situation and his difficulty with adapting to it. Isao truly idolizes Mari so far as not to look at her body even if it’s right in front of him no matter the situation. In comparison, Yori comes off as even more of an obsessive stalker than Isao, believe it or not. Much like Isao, she’s comfortable at looking at Mari in her natural state from afar. When something disrupts this natural flow, she gets aggressive and obsessive in trying to restore that balance.

The Mystery That is Mari

The two characters seem quite interesting so far, but it brings up the question of the third lead character that is, Mari herself. Not a word was spoken from the real Mari in the volume. We have no idea where or who she really is, we’re only given an image of her from the people around her.

As you can imagine, the manga’s main driving force is the mystery behind the body swap and the central character herself. The plot revolves around her, yet she is nowhere to be found. However, as you keep reading, you’ll soon start to see the plot unravel, and things get quite interesting. As I said earlier, much of Shūzō Oshimi’s work follows a similar trend. The characters are at the full front of his stories, and most of these stories have psychological tones that make the readers think in a way they wouldn’t expect to.

My only gripe with the manga is the same reason as it is a good one. Not a lot happens in the first volume. It takes an almost uncomfortable amount of time to establish the characters and plot. A manga with a similar dynamic is Oshimi’s A trail of Blood. Similar to Inside Mari, the manga introduces normal people living their lives, it takes a while to familiarize the readers with these characters, and after a while, the underlying elements of the plot begins to surface.

While I understand Inside Mari isn’t for everyone due to its incredibly slow pace or lack of an exciting story. I still justify my recommendation as it is quite a unique manga and a good introduction into the mind of Shūzō Oshimi and his work.

Have you seen any of Shūzō Oshimi’s works? What’s the most unique manga you’ve ever read? Let us know your thoughts in the comments section below.

Inside Mari is a slow burn manga that takes a while to capture the reader but once it does, it becomes quite an intriguing and enjoyable experience.