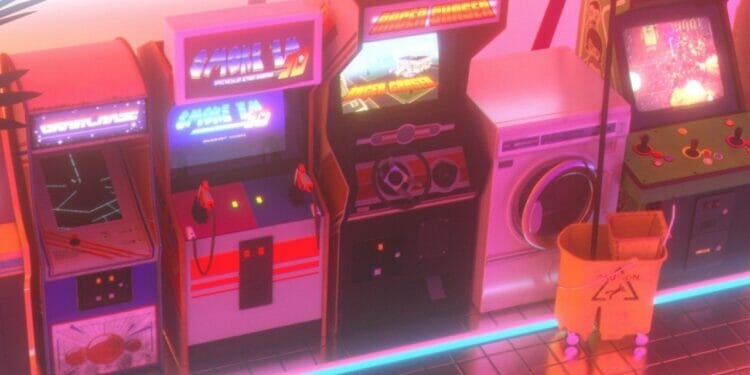 During the Guerrilla Collective E3 showcase, we got a glimpse of Arcade Paradise, an upcoming game developed by Nosebleed Interactive and published by Wired Productions. Nosebleed Interactive has previously gotten attention for its title Vostok Inc., and Arcade Paradise is its next title. Wired Productions have previously published titles such as GRIP Combat Racing and The Town Of Light.

In Arcade Paradise, we follow Ashley as she turns her family’s laundromat into a buzzing arcade. All you have to do is follow the three easy steps: play, profit, and purchase. A long-lost VHS tape gives us an introduction to the King Wash Laundromat, and the eventual arcade it will become. Any arcade game at Quarter Lounge Arcade will encourage you to relax, open up, and enjoy life again. Pick your favorite, settle in, and see if you can’t enjoy life again like you did when you were a little bit younger.

Arcade Paradise is essentially a game about managing your own arcade, unless you wanna spend your life washing clothes. If you want your new arcade to be successful, you’ll have to follow the three principles of the game.

Over 35 titles are available in the game, all inspired by 3 decades of gaming. Whatever arcade game you’ve played is probably here in some form. So stay ahead of your father as you build and invest in your own Arcade Paradise. Because who wants a boring laundromat when you can have a huge arcade?

Arcade Paradise launches on Switch, PC, PS5, PS4, Xbox Series S/X, and Xbox One. You can also wishlist the game on Steam if you are interested.

Let us know what you think of Arcade Paradise in the comments!

Kimetsu no Yaiba The Movie: Mugen Train to Stream on Funimation on June 22