Black Widow Review – A Spy Adventure Worth The Wait 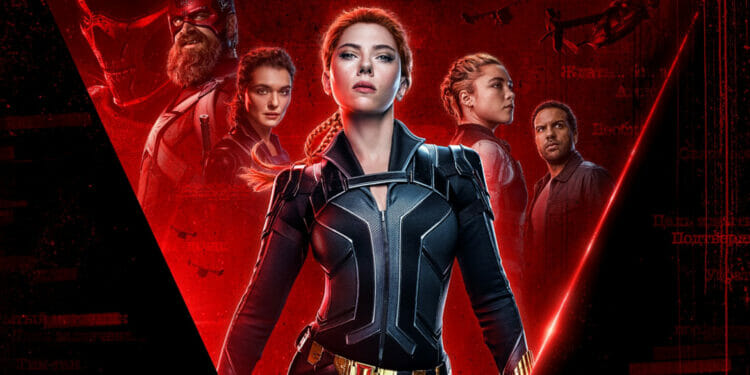 Despite being one of the founding members of the Avengers, Black Widow still seems like an enigma. Her backstory of being a trained killer since childhood seems to only have been spoken of in passing for the seven Marvel movies she appears within. The character is practically a mess of flashbacks that rarely materialize.

Black Widow’s movie has been built to give her one last hurrah, despite being late on the invitation. More backstory, character, and thematic resonance arises in her own solo film. While the film does still succumb to many Marvel misfires, it does present itself as being a tad more than just another superhero outing.

It helps that Black Widow’s tale is treated as a more personal journey for the character. Natasha Romanoff (Scarlett Johansson) still hasn’t forgiven the shadow organization of Red Room for her childhood trauma/training. It’s a mission that’s been on the backburner since she can’t find where they are.

While trying to evade the government after the events of Captain America: Civil War (2016), she has a chance to get her revenge. She finds a lead when her estranged sister Yelena (Florence Pugh) has found a way to defect from the Red Room’s hypnosis. Of course, there are some trust issues they have to work out first.

The film dips way back in time to showcase more of their upbringing. Their father, Alexei (David Harbour), was once a Soviet super-soldier known as Red Guardian. Their mother, Melina (Rachel Weisz), was a top scientist for the Russians. Both of them went so undercover in America they raised their daughters who they soon abandoned.

The Most Awkward of Reunions

Tracking down the Red Room requires that Natasha and Yelena get in contract with Alexei and Melina. The former parents, however, are under the delusion that this is more of a homecoming than a mission. They give the oldest excuse in the book for their actions; that it led to their children becoming successful.

This marks the perfect opportunity for the sisters to bond over standing up to their aged and flawed parents. The parents, in turn, also have to try to find ways to make up for their past mistakes. All of which lies in taking down the Red Room they’ve served for far too long.

Prior to the exchange, Natasha and Yelena do have some time to connect. A slower moment of them reconnecting over beers finds them getting along quite well. They share the same pains and desires with Pugh delivering a perfect performance the way she shyly comes out of her shell behind a beer bottle.

If I’m making it sound as though Black Widow is more of a slow-paced political thriller, rest easy. All of the big stunts and fantastic fight sequences are as present as ever. Highlights include a daring car chase through Budapest and a thrilling helicopter rescue amid an avalanche.

What I do want to stress is how the action never leaves the thematic focus in the dust. The film never feels as though it’s just tacking on its family dynamic as an excuse to get to climax. By the time Black Widow and her family infiltrate the Red Room’s base, the aspects of redemption and power struggles are still just as vibrant.

Black Widow’s central villain of the film is more interesting as an idea than a character. The Red Room’s leader of Dreykov (Ray Winstone) loves to control helpless women and little girls. He ultimately desires power so that he can have the freedom to commit the most heinous of acts.

Dreykov is a thematically strong villain but he doesn’t really have many motives past the grander allegory. He’s still a dangerous figure and one that is very satisfying to watch Black Widow best. His sinister intent is potent and Winstone gives this sneering antagonist a strong performance.

Since every Marvel movie needs a costumed villain, Black Widows rolls out Taskmaster, perhaps one of the more forgettable antagonists. This nameless and skull-masked warrior can duplicate the fighting skills of whoever they fight. There’s a twist as to who it is but it’s a highly predictable reveal.

Taskmaster also seems like nothing more than a silent black knight for most of the film. While the character does better tie into Black Widow’s road towards reformation, it doesn’t become highlighted or apparent until the third act. For the majority of the film, Taskmaster is more for show than being an interesting foe.

Considering that the best moments of Black Widow are surprisingly quieter moments, it’s pleasing to note the strong performances by all involved. Florence Pugh really steals the show as not only being a competent fighter but perfect with humor. She effortlessly makes hilarious and biting commentary on her sister as well as finding cute moments of individuality.

Her ease of comedy is remarkable considering how much of David Harbour’s part is written to be comic relief. Harbour has a great dad-jokes vibe to him that requires constant challenging. Weisz also has her cunning moments to shine and showcase her smarts.

I will say that Johansson’s fight scenes are not afraid to get down and dirty. She takes quite the beating, especially from battles where she wants to avoid as many kills as possible. At one point in the climax, she takes the risk of severing one of her senses to best the villain in a brutal bit of bone-breaking.

As a standalone Marvel movie, Black Widow manages to work well enough on its own, despite being a prequel. It avoids the lacking interest of a prequel by not asking whether or not she’ll live but whether she’ll be successful in defeating the Red Room’s scheme. It goes far beyond just punching the bad guy or fleeing a fireball, which she still does by the grand finale.

On the level of action, the film fits the demands for thrills of Marvel films. More surprising is how the film ventures further into its spy thriller aspects and embraces a story about much more. It’s not just a film about chases and fistfights but finding redemption, reconnecting with family, and toppling oppressive hierarchies that target women.

Sure, the film isn’t exactly trying to make this point with subtlety but that’s Marvel for ya. What I can say is that keeping such ambitions manageable, unlike The Falcon and the Winter Soldier, makes the thematic elements ring that much more bold and true.

It makes for another showcase of how Marvel Studios continues to shift on genres and use them as more than just peppered ingredients. If Captain Marvel was merely a light glaze of touching upon female empowerment, Black Widow is a full meal.

Did you see Black Widow? Is it worth seeing in the theater or on Disney+? How does it compare to Birds of Prey? Let us know in the comments below.

A solid send-off of a spy adventure for a founding Avenger.

Seven Seas Entertainment Licenses Classroom of the Elite, My Next Life as a Villainess Side Story, and More