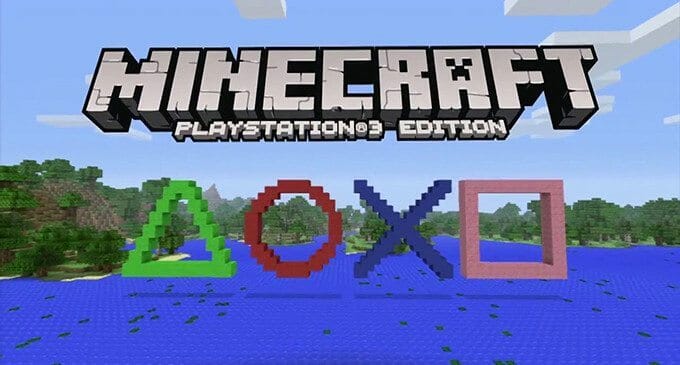 There’s been a lot of talk recently concerning Minecraft and much of it has been told using big words and legal jargon. Concerning the games EULA (end-user licence agreement), tighter restrictions have recently been put in place by Mojang to ensure that everyone accessing a user-run server gets the same gameplay elements for the same price. This means changes for both the players and the people who run the user created servers, with reactions to the news ranging from pissed to happy to what the hell do all these big words mean. However, while many have been on the Minecraft roller coaster ride long enough to feel troubled by or at least fully understand the possible implications of these changes, some have still yet to experience the game. Many of these players have been PS3 owners, and more specifically, those who do not have access to the Internet. With a digital version being released for the console at the end of last year, only those PS3 gamers on the web could play the title but not anymore. Mojang have now brought Minecraft to PS3 owners via a disk version and if you have the console but have never played the game before, it’s time to finally get involved.

Now you may be reading this review thinking why would I want to spend time with a game that features pretty shabby graphics and the repetitious act of shifting boxes around? It’s a valid question and one that many have asked before but to fully appreciate and understand the surprisingly addictive genius of Minecraft, you have to play it. Featuring two game modes, Survival and Creative, there’s a Tutorial at the beginning of the game, which you can go back and re-visit at any time. Starting players off with the basics, it’s here that you, as master builder Steve, will learn how to do things such as sprint, build, jump and mine. It’s also here that you will learn how to access your inventory, craft items and move things to your quick and handy toolbar. It’s a very explanatory tutorial and one that new players will need to pay attention too: it’s not that the controls for Minecraft are difficult but they do take a bit of time to fully sear into your brain. 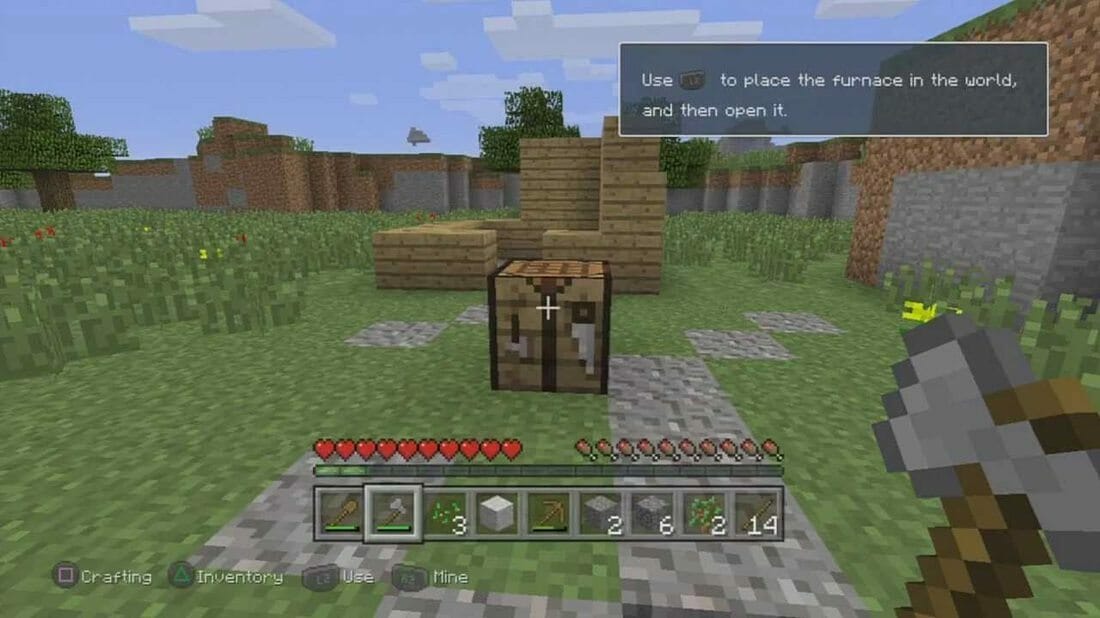 Once you’ve gone through the basics, there’s a whole other bunch of tutorial stuff that you can choose to learn about. From enchantments, where you use Experience Points gained by killing mobs (other entities in the world) to enchant weapons, armour and such, to farming animals and brewing potions, which players can consume to gain effects, there’s much too absorb. If you stick around to do these extra studies, you’ll also find out about The Nether, an alternate, hell-like dimension that can be accessed via a player-made portal in the Overworld (the main world of Minecraft). There’s also another dimension in the game called The End where you meet the Ender Dragon and his minions, and whom you will be forced to do battle with. Not just a simple box building game anymore, the tutorial really makes you realise the depths that Minecraft has and the huge amount of effort that has gone into not just creating the game but actually explaining it too, making the title accessible to all as a result. Get access to the best Minecraft Servers to explore more.

After all the learning is done, it’s time to actually start playing for real. Selecting from the aforementioned Survival and Creative modes, players can choose between the former, where you will be challenged or the latter, where you will be allowed to run wild like a dog with an unlimited supply of bones. Both modes have certain similarities, such as the same items but unlike Creative, where you are handed all of these from the start, in Survival you will have to mine, dig, and search to gather supplies. Each mode features day and night variations in time and both will allow for mobs to spawn in your world, unless you choose Peaceful mode in your difficulty settings. Other difficulties range from Easy through to Normal and Hard, with Survival mode being the place where this really matters.

As for the types of mobs, these can range from Passive creatures that don’t attack, Neutral mobs that will only attack if provoked, Tameable creatures that can be tamed by the player and Hostile creatures that will attack on sight. Some creatures only appear at night, some only in the day but it’s only again in Survival mode where you’ll have to worry about this situation, as in Creative, the player is invincible. Other similarities include the following functions: the ability to play both online and offline, the ability to add friends to your game but not friends of friends (you can allow this if you like) and the ability to allow players in you’re game to attack each other. As for the overall gameplay, both modes ultimately offer the same thing: for you to build what you want and while it is repetitive, once you start it’s very hard to stop. Both Creative and Survival though do provide alternate ways of getting to the main building objective and so the rewards from each mode are reaped in different ways. 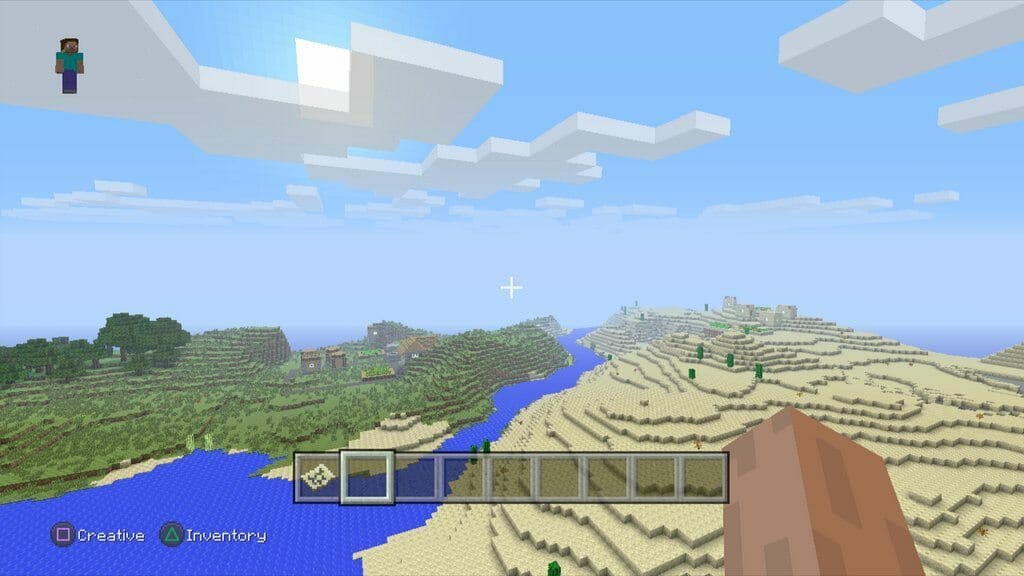 Take Survival for instance. Here you are given sweet FA in the way of items and instead you must go out and find them all yourself. Chests with supplies in, materials for building, food to staunch the hunger, all of this is dotted around the procedurally occurred world and it’s in your interest to find them in the day and hunker down at night as to avoid the really dangerous enemies. Once daytime hits, it’s your time to hunt, scavenge and find a sweet spot to start building your own place where hopefully, it won’t be blown up or set on fire. Unlike Creative, where you’re, as mentioned, invincible, in Survival you have to be careful, as a loss of life means a loss of everything on your person, unless you place things in an Ender Chest. A chest made from Obsidian that allows players to place items in them and retrieve them from any other Ender Chest, these are very handy structures to create in Survival mode. As there is much too lose in Survival, there is also much too gain. The sense of pleasure that you get when you finally manage to build something substantial is excellent and there’s no better feeling than watching your creation grow and grow, while you survive long enough to expand it. However, for a game that is all about being able to make anything, this mode can feel a little restrictive. Of course, that’s the point of it but when you’re in the mood to build Hogwarts, Survival isn’t the place to go. Creative however, is.

All the items, the ability to fly, no empty belly too worry about, Creative gives the player everything Minecraft has to offer and tells you to run amok with it. Big-ass roller coasters, huge palaces, the Eiffel Tower, there’s so many things that can be made in this mode and it’s a lot of fun to play around with. Watching as the minutes quickly turn to hours, you find yourself being fully immersed by your creation on screen. It’s like your own personal sanctuary where you can just build and get lost, unless you allow people to join you. If you do want to play with a friend however, this too can also be fun. Choosing between the online and split-mode options, you and others can either work together to build something epic or try and outdo one another’s efforts. With one bringing with it a sense of teamwork and the other a feeling of competitiveness, you’ll have to decide which one you’re in the mood for but beware, jibes towards a fellow player may lead to things being torn down and perhaps verbal or even physical fisticuffs.

Minecraft has been a global phenomenon since it arrived on the PC all those years ago and it’s head honcho of Mojang himself, Mr Markus Persson, that we have to thank for it. This month he and the company have gotten a lot backlash from fans, which has clearly rose from the passion that people have for this game. Whether this passion has surfaced in the form angry remarks towards the changes or delighted comments of approval, there’s no denying that the Minecraft community is one of the fiercest in the world and with a game as awesome as this bringing them together, it’s no wonder. If you haven’t played Minecraft yet, do so now and see why substance can sometimes be better than super realistic style. 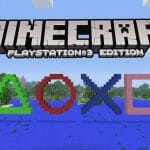 New Call of Duty: Advanced Warfare Behind the Scenes Video