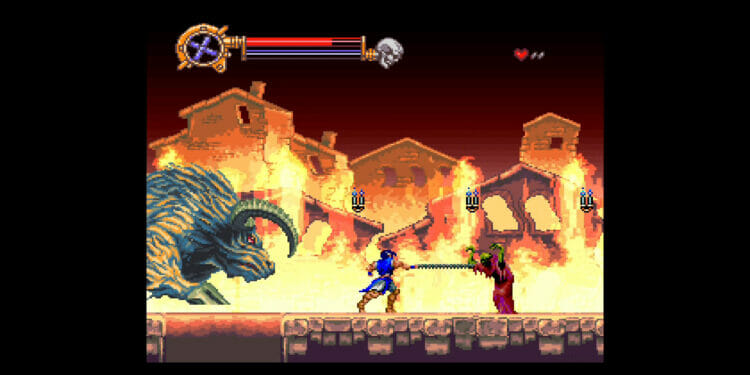 Castlevania, a name that’s pretty synonymous with sidescrolling action games of the early NES to even the current day. With a series spanning many consoles over thirty years, remakes and rereleases of past titles are bound to happen. That train of thought is exactly what we’re here to talk about, now that we mention it.

Castlevania’s seen a number of handheld titles, such as Portrait of Ruin on Nintendo DS. However, we’re going to the generation before that, as the Castlevania Advance Collection covers all three Game Boy Advance titles, along with a brand new trailer to go with them. You can watch that below.

Castlevania Advance Collection brings four titles together for users to play at any time; all three Game Boy Advance Titles (Aria of Sorrow, Harmony of Dissonance, and Circle of The Moon), as well as Dracula X, an enhanced port of Rondo of Blood. All four titles will also have all of their regional versions available, so you technically have twelve playable games if you include all of their versions as separate games.

New features for these versions include a rewind feature that can be used at any time. Messed up a platforming section and don’t feel like backtracking for a while to get back to where you were? Simply use the Rewind tool and you’re good to go. Players also have access to ten save states per game, which allows them to save and pick the games back up whenever they want if they’re far away from a save point.

Also included as a couple of extras are never-before-seen artwork and a soundtrack mode. These are exactly as they sound, a gallery mode with rare images that haven’t been publicized, and a mode where you can listen to music from past Castlevanias.

Castlevania Advance Collection is available now on PlayStation 4, Xbox One, Nintendo Switch, and PC via Steam.

What did you think about the Castlevania Advance Collection reveal? Do you want to buy it? Have you played any of these games before? If you have, which one is your favorite? Let us know your thoughts in the comments section below.

If you like Castlevania games, be sure to read our Symphony of the Night review here.