I’ve looked at and played quite a few FTL-like games in the time since I finally pried myself away from that addictive romp through space. Few have lived up to the quality and outright fun of that now classic indie title. In the years since, games like Convoy have taken the basic principle of dragging a single ship or vehicle through a roguelite design engaged in tactical combat and upgrading. However, only after playing French developer Alt Shift‘s Crying Suns have I finally found a game of this type that lives up to its inspiration. 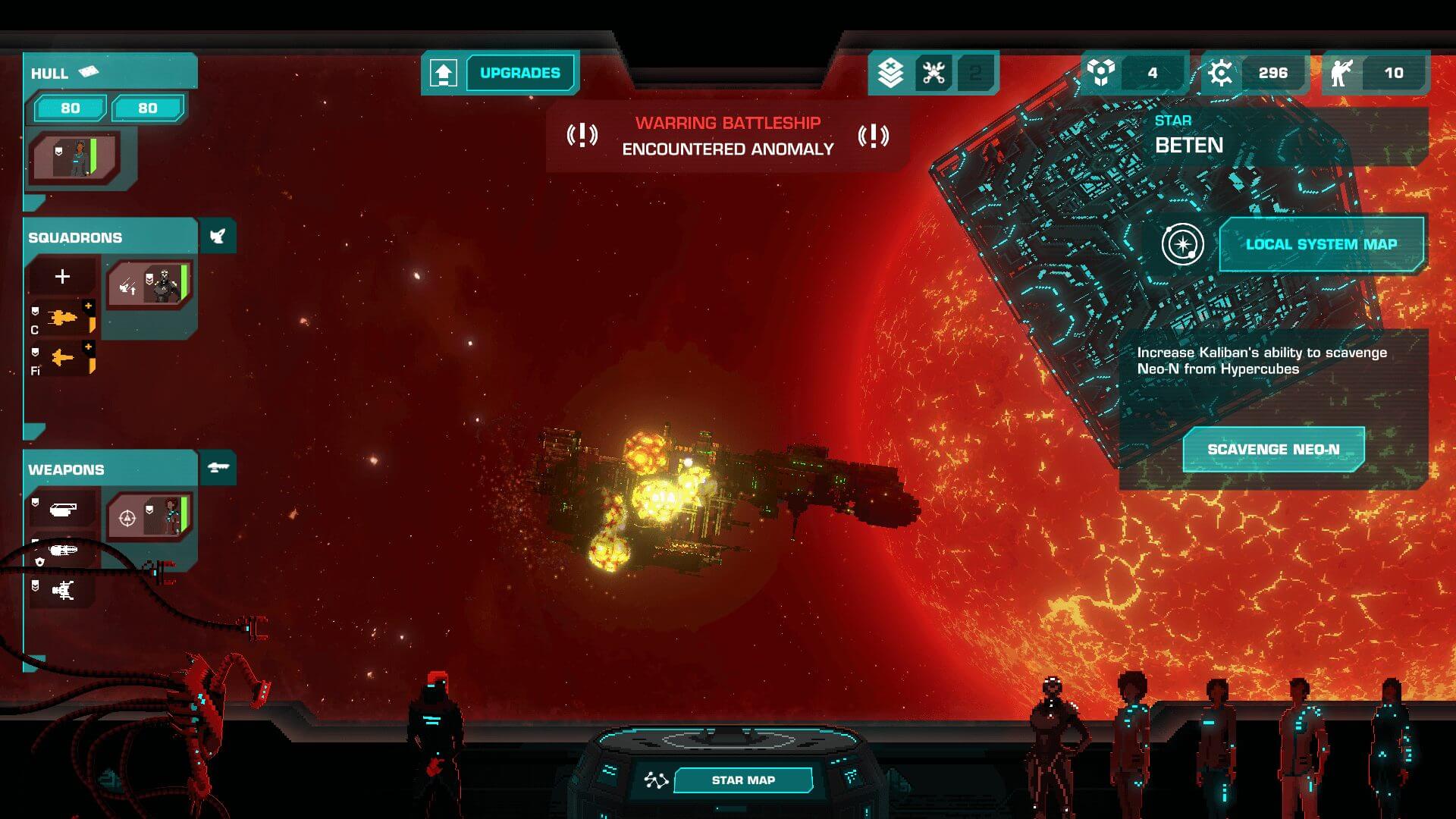 The biggest problem with many games of this type is that they see the success and addictive quality of FTL and they say, “ok let’s remake that with a new skin.” Crying Suns takes the basic premise of an Oregon Trail-like journey with real-time combat (with pause) and adds a lot of great ideas to it. It made me stop making comparisons to FTL in my head and start just playing and enjoying the game.

The addition of a rich and heavy narrative made the allure of Crying Suns less about trying to hit a victory screen and more about unlocking the mysteries within the story. Combat didn’t rely on managing your ship functions. Instead, it opted to give the player real-time strategy to play out. Battleships turn into goal lines to reach. Interactivity with NPCs could involve several different checks and probabilities across your resources. It all came together to make a dense experience on many different levels. 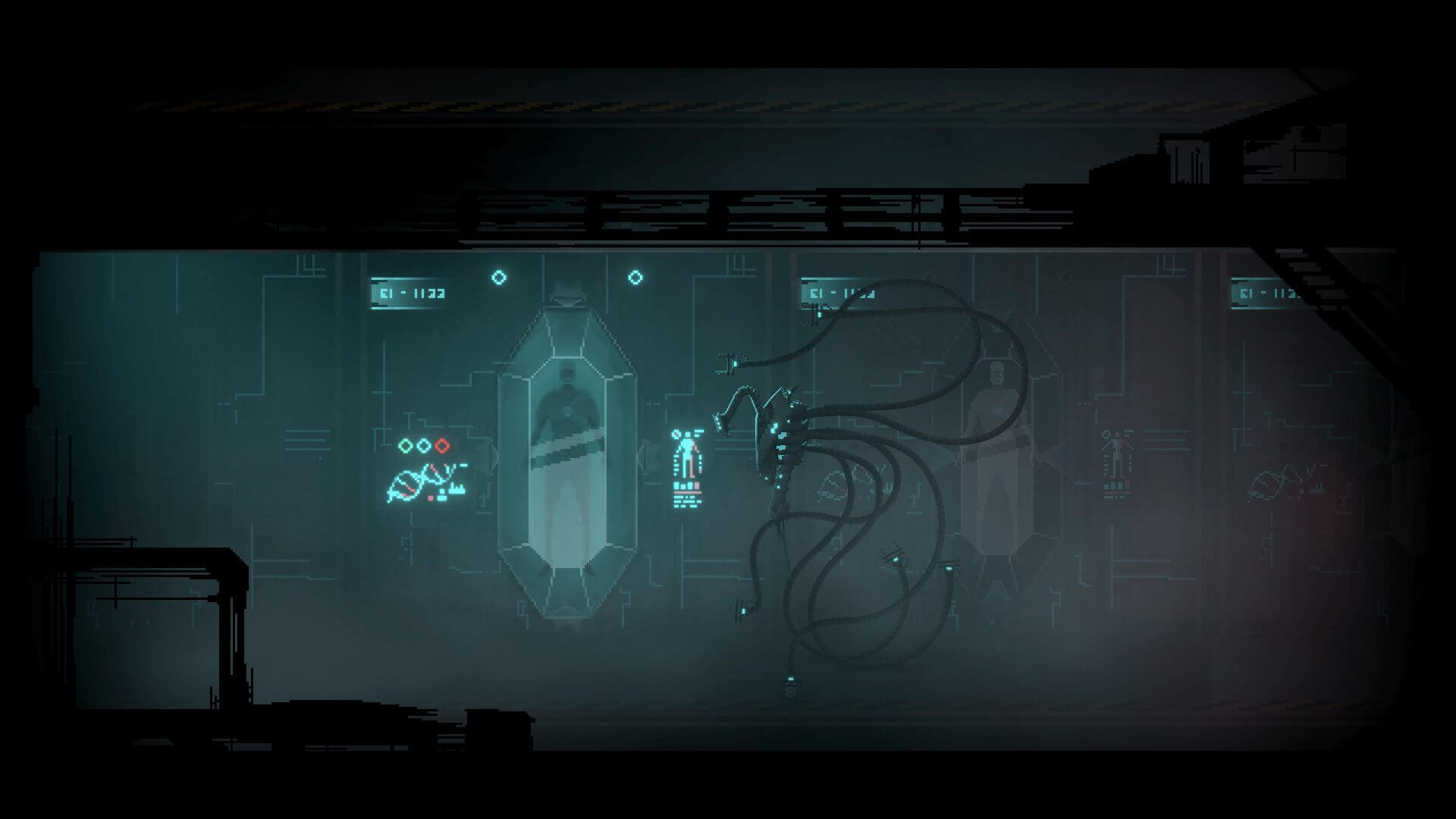 A Book in a Game

The story within Crying Suns is expansive. I don’t think it’s overly complex, and it doesn’t feel like it drags on. But outside of some large RPGs, I don’t think I’ve encountered a game with more story elements. In every bit of design, you can sense that the developer wanted the story to be a prominent part of the game. If you’re a person who’s not willing to sit and click through dialogue though, Crying Suns may not be for you.

There’s a tangible difference between reading a story in a book and reading it through dialogue in a game. Dialogue that can take up a single page in a book is spread across the scrolling text of a game, and seems much more involved. It almost gives it a movie-like feel, except you’re splitting the scenes up with extensive bits of gameplay.

The story is well crafted, placing you in the role of an awakened clone tasked with saving an empire. It gives you a perspective where the protagonist knows as little as you do. You get to learn about the story at the same speed as the character. When done well, it’s one of my favorite story designs since it limits the likelihood of you questioning the protagonist’s knowledge of the environment. Going through a story with so much interaction and all of the twists and turns provides a great foundation upon which the rest of the story can be built. 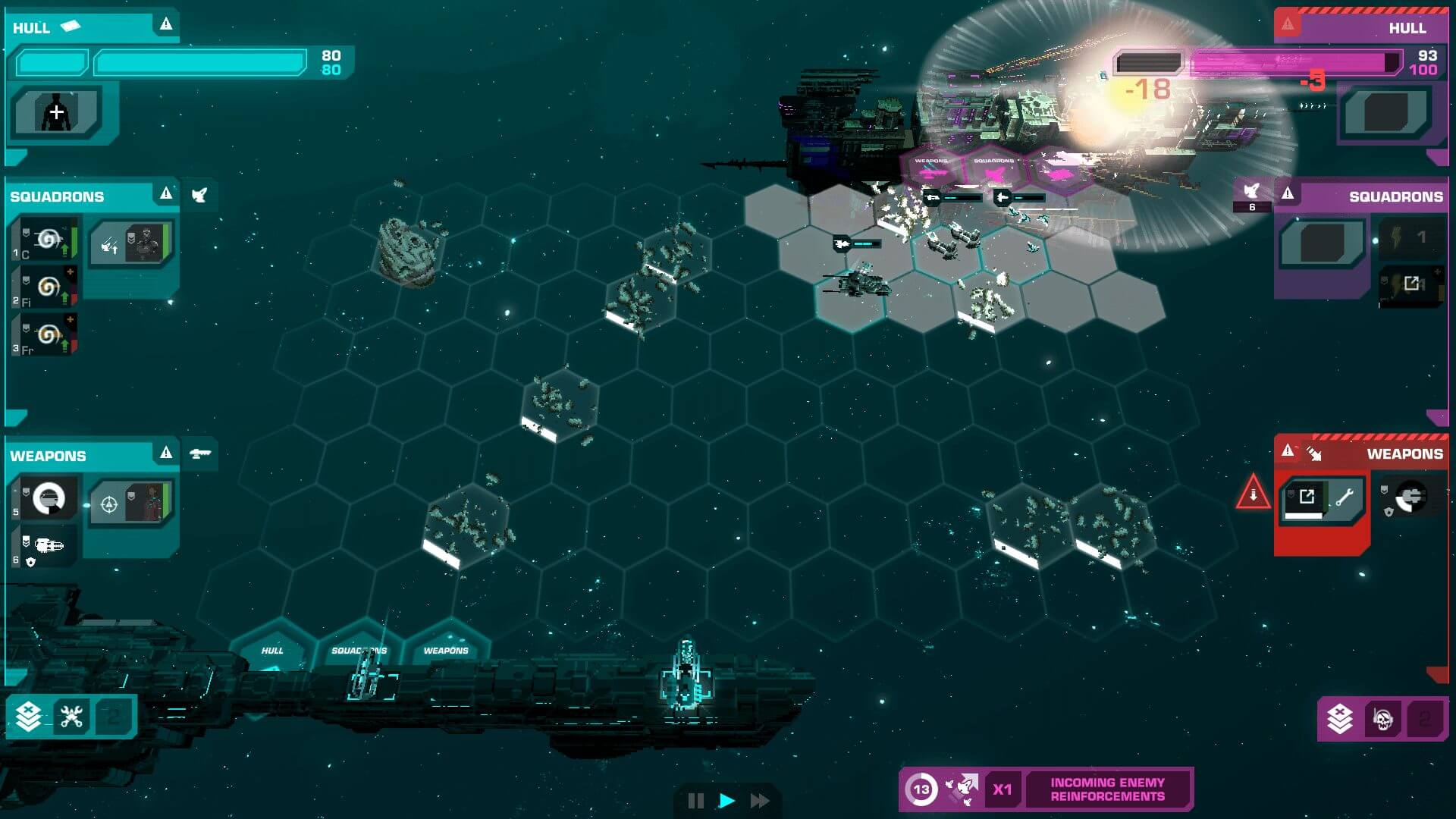 The combat of Crying Suns has you face off broadside with your opponent’s battleship, bearing all of the weapons you (may or may not) have equipped, and blasting each other. However, these weapons are very slow to fire – often taking 30 seconds or more to recharge. Most of the weapons in the game won’t even damage battleships. The majority of them damage or affect the many squadrons that you control within the space between the battleships.

This area is a hex-filled rectangle that can potentially be filled with impassable asteroids, lighter asteroids for cover, automated turrets, EMP blasters, and some other random hazards that will make navigating it more challenging than the vacuum of space would normally be. Here, you’ll be sending out your squadrons to face off against your opponents. The goal is to make it to the enemy battleship and take it down.

The squadrons come in four flavors: Drones, Fighters, Frigates, and Cruisers. The drones, fighters, and frigates are the bulk of the classes. They have a rock-paper-scissors style of combat reminiscent of Fire Emblem. The cruisers are the only long-range variety, and are weak to all classes up close.

The way this works ends up feeling like every battle is a tiny map in an RTS game. The bases become battleships, and you’re throwing units and abilities to wipe the enemy out. There is a fairly significant assortment of different types of units in each class. This turns even the rock-paper-scissors rule set into more of a suggestion than a law.

For instance, a type of drone can lock down an adjacent unit, making it unable to attack or move. So even though they can normally be obliterated by fighters, they could pick away at one while avoiding harm in this scenario. Add on top of that the various ways anti-squadron battleship weapons can be used, and you have yourself some robust gameplay. 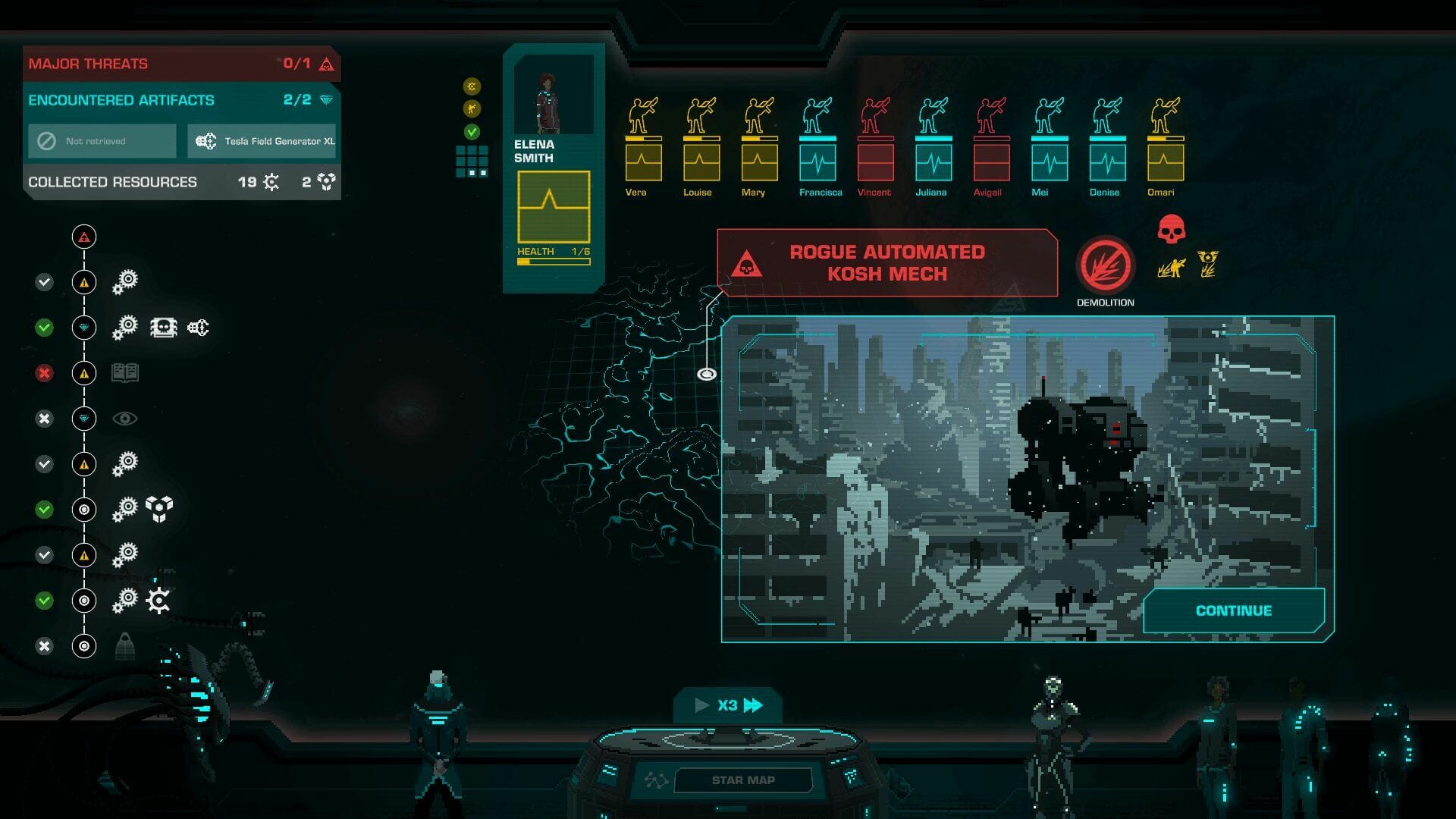 With all of the story beats and combat, it seems like there wouldn’t be much room for anything else. But traveling between the various star systems and planets has a lot of gameplay left to experience. Each planet has the potential to have an event where you interact with NPCs. These could be aiding civilians, coercing enemies, or exploring derelict ships. These sometimes either involve random chances or using the skills of your crew to get the best possible outcome.

One of the more common and probably least interactive part of gameplay is the planetary ‘away mission.’ This requires sending some soldiers and the appropriately skilled officer down to a planet to gather resources. While this is one of the best ways to gain resources, it seems like a massive collection of dice rolls depending on which officers you have and what event it is. You just select the officer with the best potential outcome and zone out for the next 30-60 seconds while they work. I found myself instinctively picking up my phone and browsing the internet during these portions – which probably isn’t a good sign. 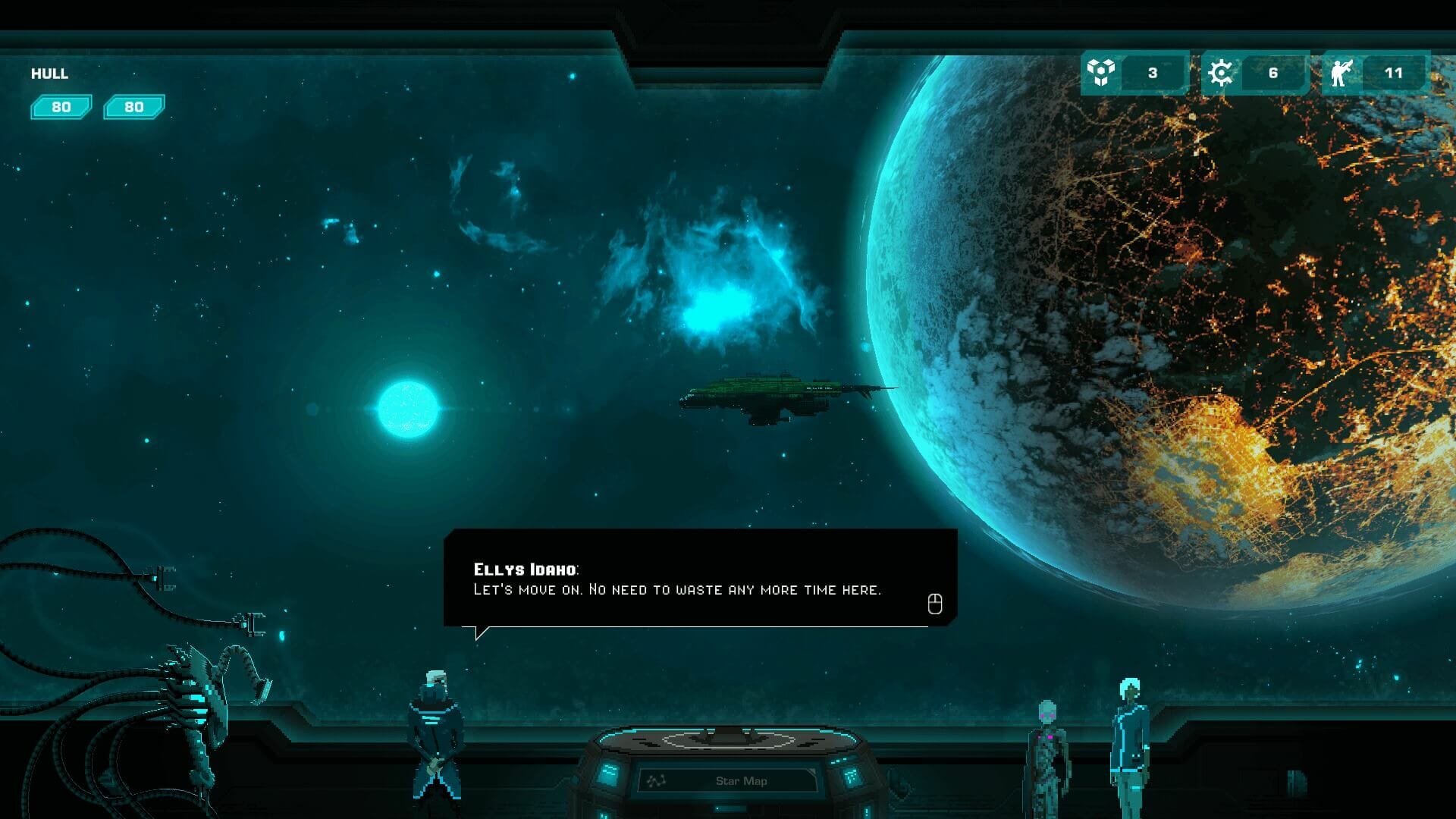 Crying Suns feels like a natural progression from FTL. That’s a good place to be, in my opinion. While I don’t think FTL developer Subset Games cares much about writing deep stories, it works well in this format. Alt Shift has done a great job integrating story into a game type that seemingly wouldn’t normally accept it. Roguelites inherently depend on replaying content, so repeating a piece of the story would be terrible. However, the chapter-styled system in Crying Suns also works as a kind of ‘checkpoint’ system. This gives a tough game a working narrative with minimal rehashing.

Sure, there are some issues, like the aforementioned hands-off planet missions. You’re often presented interactive choices that depend on officer skills or affect your battleship, but you can’t look at either of them while it’s happening – which can be frustrating. It can also be annoying to face off against enemies that get random reinforcements, giving them a huge advantage you can’t counter or anticipate. There are even times when the story interaction UI feels kind of convoluted.

However, taken as a whole, Crying Suns is a really fun game. The issues I have with it aren’t impossible to fix. I don’t know if it necessarily has the replayability of FTL. But updates and DLC could make that a much more viable prospect. I recommend anyone with even a passing interest to at least try the free demo. If you love a good, challenging roguelite with a quality story and one that doesn’t require hyper-twitch reaction times, this is a must-play.

Have you played Crying Suns? Did it remind you of FTL? Leave your thoughts in the comments below.

If you’re interested in more RTS games, check out our retrospective on Homeworld and our review of Auralux: Constellations.

Crying Suns stands as a great spiritual successor to FTL, but expands on the formula in many key areas - especially the story.