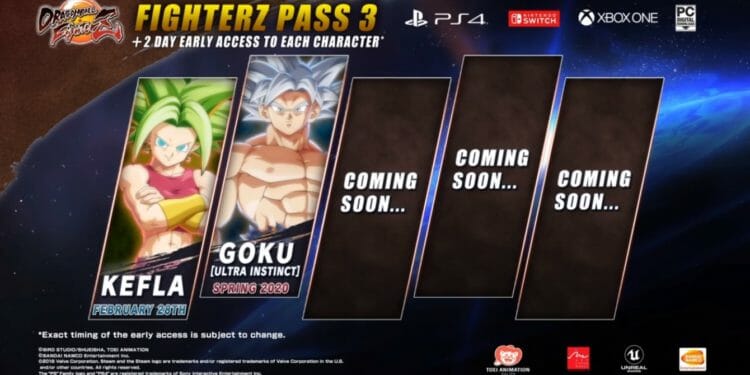 The Dragon Ball FighterZ World Tour has ended not too long ago. After a long season of hype moments and incredible fights, the World Tour ended with CO|Go1 in the lead. However, Bandai Namco also used the ending of the World Tour in Paris, France to talk about DBFZ Season 3. Boy, there’s a lot to talk about now that the announcement has been made!

The new season of Dragon Ball FighterZ will bring a revamp of the game’s mechanics. This means that players will be able to enjoy completely new features that will help them in battle. Not only that, but the latest season also sees the introduction of two new characters: The previously leaked Ultra Instinct Goku and Kefla. The trailer unapologetically even shows the full iteration of the cinematic that was leaked. It’s gorgeous.

So, let’s talk about the newest characters to join the fight. As seen in the trailer, Ultra Instinct Goku is going to become part of the roster. So, yeah, this is basically another iteration of Goku coming to Dragon Ball FighterZ. Needless to say, people aren’t really enthusiastic about the idea. Especially because it reminds them of a certain other franchise that gets way too much representation in fighting games.

That’s not all, Kefla from Dragon Ball Super: Broly is joining the fight. She is the fusion of Caulifla and Kale, who almost managed to defeat Goku. Kefla will kick off the DBFZ Season 3 DLC roster for Dragon Ball FighterZ on February 28. Ultra Instinct Goku will release sometime in the spring.

Will Arc System Works and Bandai Namco make this season a great one in terms of content? Well, that’s really up to the spectator. While it’s true that there are a lot of iterations of Goku, it’s not something that strange to the franchise. Other Dragon Ball Z games (fighting game or otherwise) almost always included a ton of Goku’s for people to play around with.

Still, it’s fair to make this analogy because back then, every Goku was available with the game on release. Meanwhile, DBFZ expects you to purchase each iteration of Goku that gets announced. So, again, this could be a good or bad thing depending on whether or not you like the character. I know that it’s good for a certain dunking specialist!

Z-Assist and Other Mechanic Revamps

As mentioned before, DBFZ Season 3 will introduce new features and mechanics to revitalize the combat. The most notable addition that was mentioned was the existence of a “Z-Assist Select” feature. With it, players are able to choose one of three possible assists for their selected combatants at the start of every match.

So, you can have Vegeta SSJ using his Crushing Knee Kick (214 A/B/C) rather than his Ki Blast Rush (236 S). This will add variety to the character selection and increase the combo potential of certain characters. The development team wishes for characters to be chosen based on their merits rather than on how good their assist is.

It was also mentioned that the balance team intends to implement another feature that will help solo players. Namely, a mechanic that lets players have a chance to turn the tables, even if they only have one character left. While the footage doesn’t let us know exactly what was changed, it will make anchor characters more important than before. So, players will not be completely hopeless once they lose their Sparking!, right?

Some keen-eyed players have noticed that fuzzy guard breaks might be gone from the game as well. In this segment of the video, you can see Bardock trying to do a fuzzy on Broly. However, his j5A attack ends up whiffing instead of connecting. Could this mean that you can’t attack while your assist is attacking?

Finally, we also ended up getting a glimpse of the new user interface for the game’s character select screen. Dragon Ball FighterZ Producer Tomoko Hiroki mentioned that there will be new gameplay modes for the game as well. So, technical players will have a lot to look up to when Season 3 starts two weeks from now. DBFZ Season 3 is going to be ripe with a lot of content and new gameplay modes for Dragon Ball Fans. Technical players will be happy to know that this game will get more features to keep them playing for much longer. It’s a win-win for both parties and I cannot be any happier about the steps the balancing team is taking moving forward.

Are you looking forward to Season 3? Are you going to play as Ultra Instinct Goku or Kefla? Who do you think is going to be revealed next? Let us know your thoughts in the comments section below. Are you an avid fan of Dragon Ball? Check out our review of Dragon Ball Z: Kakarot review.