When stopping isn't an option...

In the early days of gaming expansions, one common theme was having the same basic gameplay, but with significantly higher difficulty. Id Software has created an homage to those times with Doom Eternal: The Ancient Gods. This expansion – or DLC as we now call it – is all of the gameplay of the original game with a few useful twists added in for freshness. It may be missing some secondary elements, but if you were a fan, you’ll continue to be a fan. 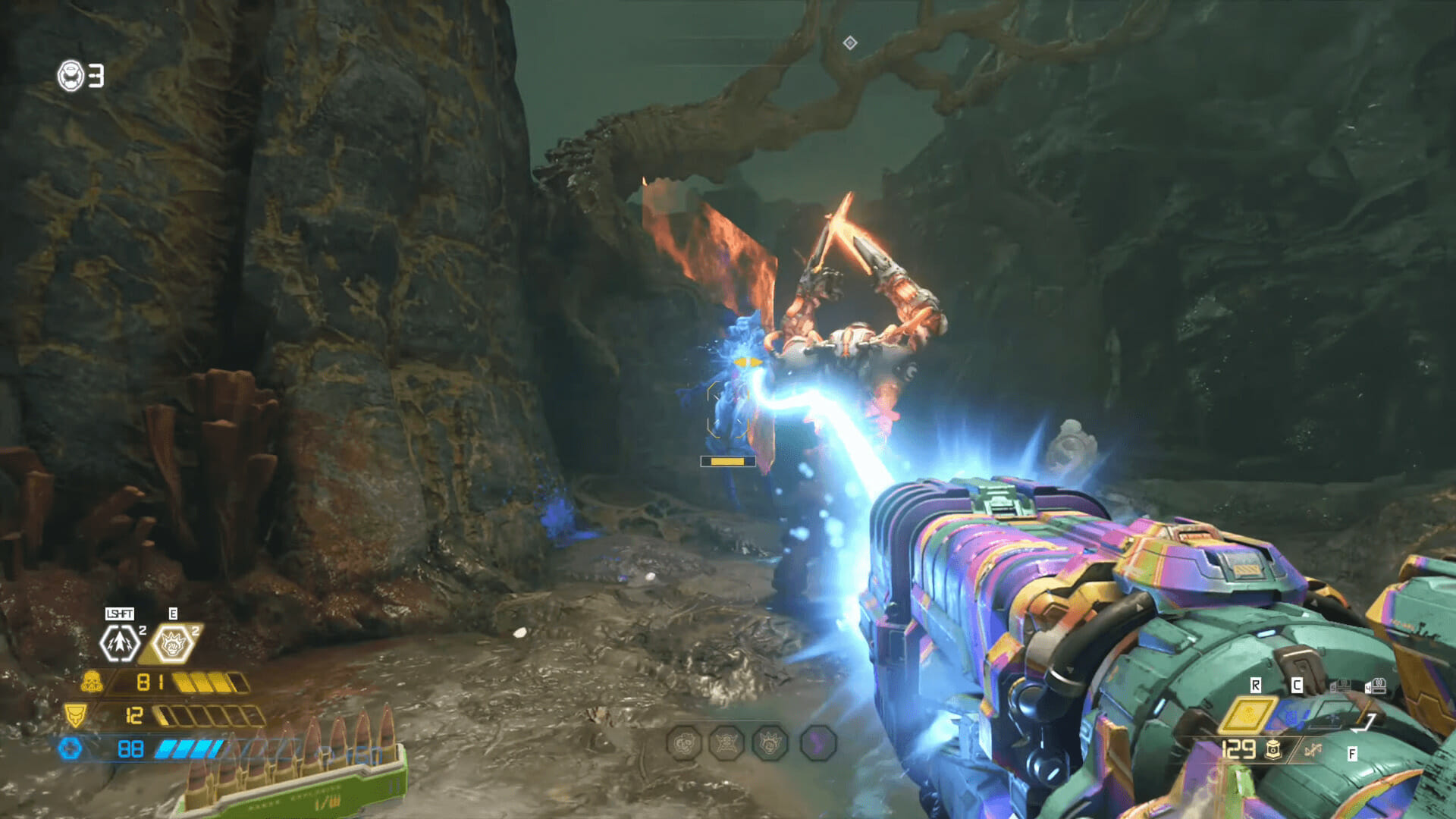 All of the enemies from Doom Eternal are back in this first episode of DLC. Many of them are there straight from the beginning. You don’t get any sort of soft entry into this experience. Within ten seconds, you’re engaged in the first of many arena battles with loads of end-game demons. This is a welcome experience though since you are equally decked out in gear. Every weapon, modification, and skills you accumulated in the base game is available. It makes the experience feel as though you stepped right from Doom Eternal’s ending into The Ancient Gods.

Within all of that familiarity, they do manage to add some new elements in the form of enemies that will ruin your day. On top of the ramped-up difficulty, a new pop-up turret blasts away at you from afar. Only precision shots from a distance can take it out since it will duck back into its casing if you get too close. Along with this, the Blood Maykr presents another invincible enemy (like the Marauder) that only occasionally exposes its weak point for a quick kill. However, these are neither as challenging nor deadly as the Spirit.

On its own, the Spirit does nothing, but when it inhabits another demon, that demon becomes super-powered. With more health, speed, and damage along with an inability to be staggered, the wrong demon could easily finish you off by itself. When these things are part of a battle, you cannot focus on anything else. Once you defeat the inhabited demon, the Spirit will try to move to another. The only way to stop this is to use your Plasma Rifle alternate fire and zap it with the beam. If this isn’t an homage to Ghostbusters, I don’t know what is. 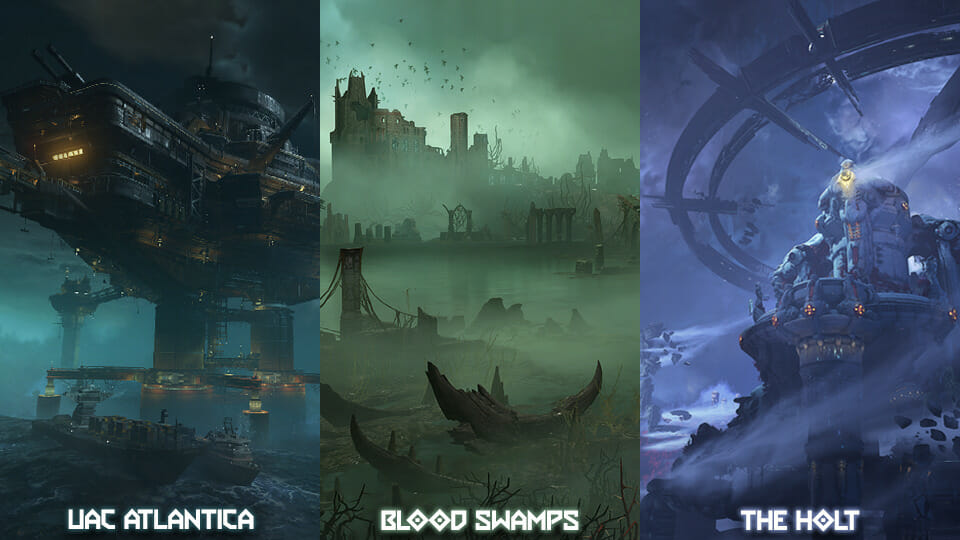 The three levels available in The Ancient Gods seem paltry compared to the thirteen in Doom Eternal. However, each of these levels is as long as or longer than the most robust levels of the original. The first has you exploring an offshore platform that is reminiscent of much of the design from Doom (2016). It features industrial facility style hallways, doors, and more all with the backdrop of a raging ocean. The next level takes you into an otherworldly swamp to complete “trials” which, of course, just have you killing everything. Then you finish back on Urdak once again, but this time you get to see the fantasy-styled wilderness.

Part of what makes these levels extend to around six hours of content is the difficulty. From the beginning, you’ll be fighting tougher enemies that take more effort to kill. There seems to be more per encounter as well. If you’re a fan of the arena-like combat experiences from the original, these are more prominent than ever. I also found that the designs of these ‘arenas’ are much more diverse with more verticality than ever before. Instead of spreading across two levels, they may have four with multiple jump pads and a teleporter. This is almost a necessity with such large and powerful enemies.

One notable level that is missing is the Fortress of Doom – the gothic floating space station the Doom Slayer would return to between missions. Now, you return to a ship manned by UAC personnel between levels. Here, you only have one chance to run around check out the restrictive room without anything of note to investigate. I missed the ability to obtain and view collectibles as I did in Doom Eternal. It was a nice way to break up the stressful chaos of obliterating demons. 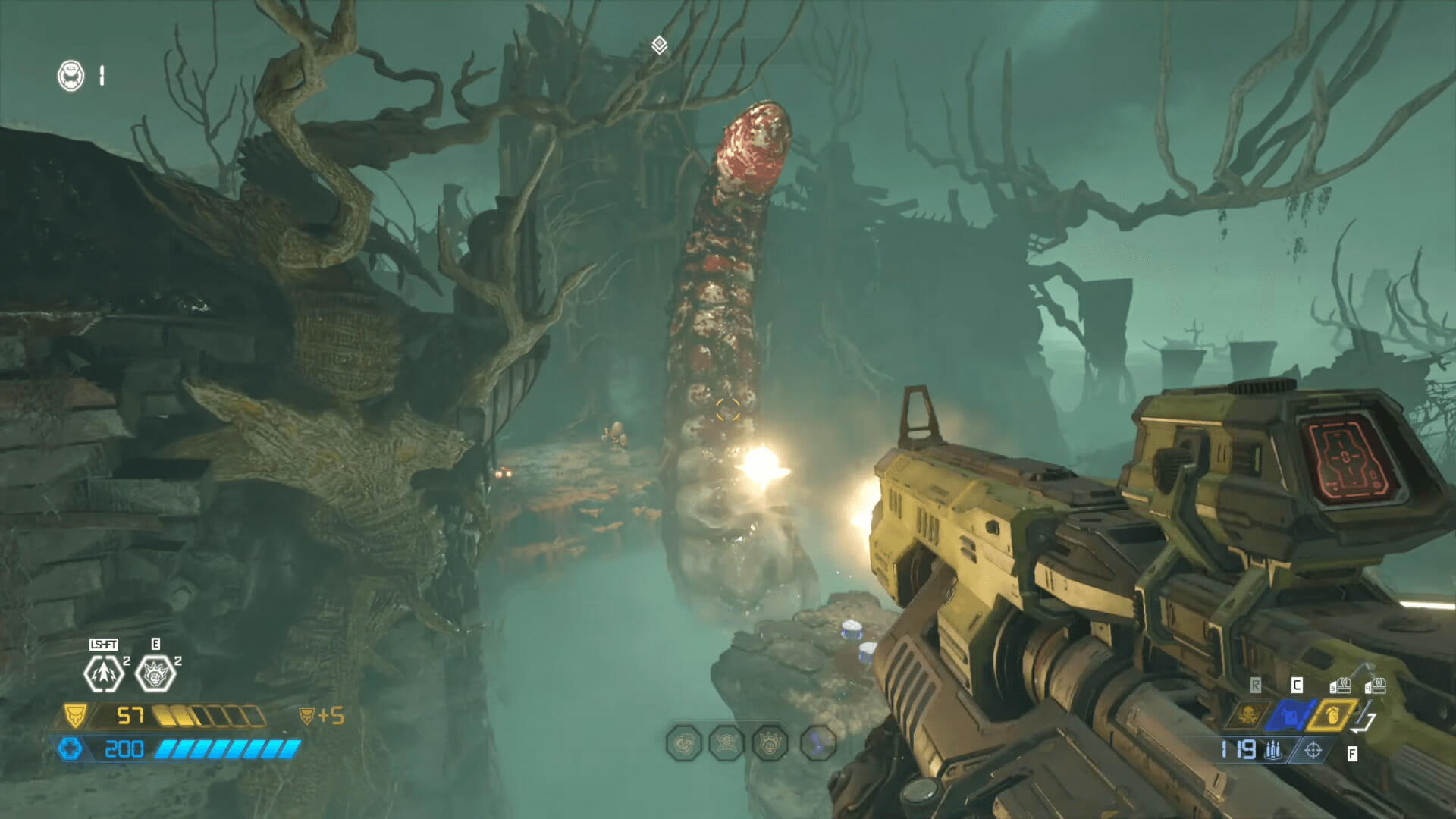 The Same, But More!

The Ancient Gods is probably as much as anyone could ever expect from DLC. It’s a standalone product, which seems odd to me given how it ties directly into the story. Yet, it is a breeze to transition back into the gameplay. There are no new weapons and new enemy introductions are gradual. The additional abilities you unlock fit right in with the standard slayer abilities, such as regaining a lost life from the enemy that killed you or empowering your blood punch when you’re low on health.

The story elements, for what little I know about them, tag right along with the end of Doom Eternal. There’s not an extensive narrative going on across three levels, but needless to say, the ending will leave everyone excited about Part 2 of this adventure. Given that Bethesda has called this the “Year One Pass,” I’m curious if there will be a “Year Two Pass.” I suspect it will have something to do with how well this one sells. If so, the elements within this story make it hard for me to envision where the story would go next.

Without question, anyone who played and enjoyed Doom Eternal will love The Ancient Gods. The game is challenging and enriching enough to justify the price, and just long enough too. However, it won’t win over anyone who didn’t like the base game, as it changes very little. I think the only place it misses the mark of perfection is by not providing cool collectibles like soundtracks and figures for an expanded Fortress of Doom. It may seem small to some, but I can’t imagine Doom Eternal without that part of the gameplay experience.

If you’d like to see more reviews, check out Doom Eternal or BPM: Bullets Per Minute!

Doom Eternal: The Ancient Gods is a fantastic continuation of the base game with extra difficulty across the board and a few new additions. It advances the story and challenges the player just enough to get anyone excited about the second part.

Kirby Is The Most Recognizable Video Game Character

Kirby Is The Most Recognizable Video Game Character