by Daniel Newton
in Tech
0

EPOS has launched a brand new flagship gaming headset with the H6PRO which builds upon the foundation of the cheaper EPOS H3 resulting in a sleeker, smarter design while maintaining simplicity and ease-of-use.

Available in both open-back and closed-back models, the H6PRO isn’t exactly the cheapest gaming headset at £149 or $179 (but it’s certainly not the most expensive) and it’s lack of extra features may be a little disappointing for some, but I’ve found it to be a solid, versatile piece of kit that’s ready for action right out of the box, so lets take a closer look. 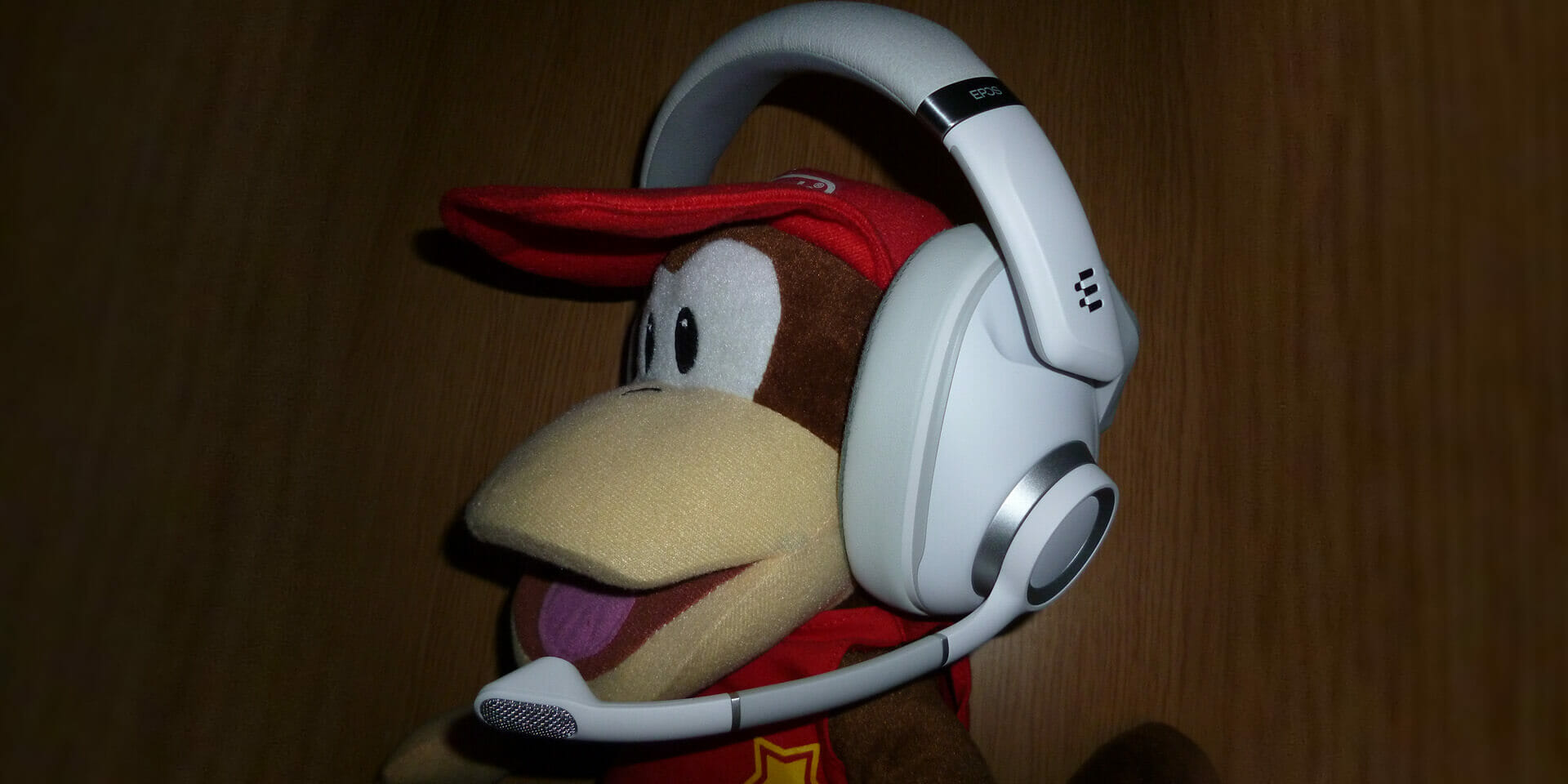 The H6PRO has a somewhat minimalist, sleek design without any of those harsh jagged edges you can find on some other gaming headsets currently on the market. In fact once you detach the mic they can easily pass as a standard pair of headphones, so you’ll be less likely to get those weird looks if you take them out and about with you to listen to some tunes or your favourite podcast. The headset is mostly plastic which doesn’t necessarily scream “premium” but does have a few metal highlights, including a sturdy-yet-flexible metal headband running underneath a leatherette exterior. Personally I would have liked to see the rings on the back of the earcups made of metal to match, but overall that’s a minor complaint. The plastic used does appear to be sturdy and the unit overall feels very durable.

The aforementioned detachable mic is lift-to-mute and locks onto the side of the headset magnetically making it very easy to remove and replace with a small plastic cover (which comes with a spare in case you lose it) to hide the connector. The mic arm is fairly long and has some flexibility in the middle to bring it closer or further away from your face.

The H6PRO is easily the most comfortable headset I’ve used, with large, soft earcups that (at least in my case) sit around my ears with room to spare. The cups vary between the open-back and closed-back models. The closed-back cups use memory foam to help conform to the shape of your head and have a leatherette exterior to match the leatherette band, with a layer of soft cloth material. The open-back cups instead use acoustically breathable foam and are covered in what appears to be a more breathable fabric too, which all makes sense. While I’m not sure I’d say either pair is more comfortable than the other, they do feel distinctly different. The closed-back pair with it’s noise-cancelling design feels like it really encapsulates your head as you might expect, while the open-back pair (which is a touch lighter) barely feels like putting a pair of headphones on at all, at least by comparison. The closed pair weigh 322 grams and the open 309 grams.

It’s available in three different colour schemes – Sebring Black, Racing Green and Ghost White. The open-back and closed-back units I received came in black and white respectively and while the white design just edges it out for me personally, both look very nice. Ghost White is nicely accented with silver and light greys, Racing Green has black and gold accents and most of the plastic parts of the Sebring Black scheme are actually more of a dark navy blue. Side-note: the Racing Green scheme immediately reminded me of Master Chief’s armour, so if you’re looking for a headset to go with the upcoming release of Halo Infinite that might be the one to go with. In any case it’s a nice selection to choose from and they all look quite smart. Two detachable audio cables are included; a 1.5m long cable for use with combined 3.5mm headphone jack devices like a game controller or handhelds like a Switch, and a 2m long cable with separate 3.5mm headphone and mic jacks for use with a PC. To be honest I found the shorter cable unnecessarily long for it’s purpose and would prefer the longer PC cable to be, well, longer, so that’s something to keep in mind. Audio extension cables thankfully do exist though. As you may have gathered, this headset is strictly wired-only and it’s a little disappointing that there’s no wireless connectivity as an option. 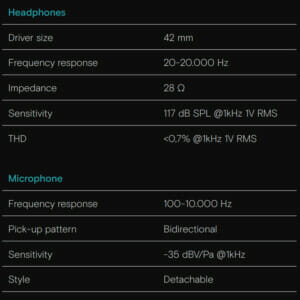 The important part is the sound of course and thankfully the 42mm drivers provide clear, pleasing, and suitably accurate audio reproduction. The sound is quite balanced, providing a good amount of bass without trying to blow out your eardrums. In my testing I had very satisfying results not just playing games but watching movies and listening to music too, so overall the headset feels quite versatile despite being marketed for gaming. I’m not going to pretend the H6PRO produces the super high-end audiophile sound of headphones that cost several times the price, but you’re getting a great experience.

The H6PRO features a physical volume wheel on the right side that I quickly found very easy and natural to use. Something I found a little odd is that turning this all the way down doesn’t reduce the volume to zero — it’s quiet, but certainly still audible. There’s no mute button (or any other controls besides the volume wheel) on the headset either so if you do want to mute the audio, you’ll have to do it directly from whatever device you’re plugged into.

The main question of course is whether you want the open-back or closed-back version, which will depend on a number of factors as well as personal preferences. First off you need to consider your environment, if it’s particularly noisy and you want to block out as much ambient noise as possible, you’ll naturally want the closed-back option. If that’s less of a concern you may opt for open-back, say if you’ll be using these in a quiet bedroom or gaming den. It may also be preferable for streamers who want to use headphones for lengthy periods, but don’t want the isolation and noise-cancellation you get with closed-back.

The open-back offers a slightly more expansive and balanced soundstage which may feel more natural and airy, at the cost of both background noise around you bleeding in through the headset and sound from the headset itself bleeding out. This means anyone around you will easily hear what you’re listening too and on top of that you do lose some of the overall volume.

The closed-back is naturally the opposite. You’ll gain some more volume, bass and resonance at the cost of a less expansive soundstage. If you purely want these for more hardcore gaming, I would lean towards this option. Especially if you play competitive games and want to hear enemies around you as clearly as possible and block out any background noise.

Neither version are especially loud compared to some other headsets out there, so if you’re after a real eardrum-rumbling experience you’ll have to figure out a software or additional hardware solution to boost the volume or tweak it to your liking, or just look for a louder headset. Personally I found both versions of the headset to be good gaming experiences but I definitely preferred the closed pair. You’ll just have to figure out which option sounds right for you.

The mic offers clear audio that’s more than good enough for online gaming and ideal for use on PlayStation and Xbox consoles, though if you’re a PC gamer with a dedicated gaming or studio microphone I would of course recommend simply detaching the headset mic and using that instead.

The EPOS H6PRO is a very versatile, balanced headset that offers not just a great gaming audio experience but a great audio experience all-around. Provided you’re not looking for a ton of extra features, wireless connectivity, fancy RGB lighting or earthshattering volume. If what you do want is a smart, minimalistic design and easy plug-and-play compatibility with a vast array of devices including consoles and PC, and excellent comfort, this could certainly be the headset for you.

You can get yours in the UK for £149 from EPOS, Amazon, Argos and other retailers.
Or in the US it’s $179 from Amazon.
Make sure you pick the correct colour and model you’re looking for!

EPOS offers another fantastic headset both for gaming and general use. A lack of extra features or wireless connectivity may prevent it from meeting some specific needs, but if you're looking for a sleek, versatile, plug-and-play headset you can't go wrong. It's also extremely comfortable.

Online Blackjack vs Land Based Blackjack