BagoGames > Articles > Game Reviews > PS Vita Reviews > Fallen Legion: Flames of Rebellion Review – Whose Side Are You On?

The recent release of the two Fallen Legion games is an interesting take on telling a story from two different points of views, across two different systems. While Fallen Legion: Sins of an Empire may be the game that gets the most play, and will make players more familiar with its heroine Cecille, the other release, Fallen Legion: Flames of Rebellion should not be ignored.

Players who play Fallen Legion: Flames of Rebellion will become familiar with the fallen general, Laendur, as he battles across the countryside, fighting against the empire that he once protected. The game lets players know early on what the reasonings behind leaving his former post were, and what has inspired him to take up the cause that he has set upon. As a standalone story, it is still fairly interesting, and perhaps even more so than Cecille’s story in some ways. However after having played Sins of an Empire first, it did make Flames of Rebellion‘s story sink in a bit more, and I was very interested in seeing how things would play out, and what Laendur would do in his quest.

The gameplay on the Vita is more or less the same as the PlayStation 4 version. The world map exists for you to go from point to point, either triggering a scene with some dialogue or beginning combat. It has the same mechanics seen in Fallen Legion: Sins of an Empire, where characters are tied to one of the four face buttons, and as each characters meter fills, you can press the button to attack, or you can also block or parry. It’s a fine combat system, however, the game does tend to have bits of slowdown here or there, and it definitely happened far more than on the PlayStation 4. Sometimes that slowdown ended up helping me time my blocks and parries better, and sometimes it messed up my button presses overall. It’s not the end of the world but still something that I could do without.

The game itself looks fairly good on the Vita, in comparison to the PlayStation 4 release. The screen on the Vita should make the game pop and make it stand out more, but I found that on occasion the game just didn’t look as crisp as I would have liked. The music, however, is still very much a standout and is one of my favorite parts of the game. The score is simply fantastic, and I found myself humming along to it more often than not. Overall, however, the game is a solid looking and great sounding game for the Vita, and the character designs and aesthetics do pay homage to the action-RPG classics of Vanillaware.

The only thing that seems like it could be a drawback is the amount of Vita owners versus PlayStation 4 owners. There is a good chance that those that play Fallen Legion: Sins of an Empire on their PlayStation 4, may never have the chance to play Flames of Rebellion. The choice to release a game that ties its narrative so closely to another game on another system is a bit of a gamble, and sadly not all players will be able to take in the complete story.

YummyYummyTummy has created an interesting world in Fenumia, and both of the games provide interesting insight and takes on what war is really about, and that it’s not as simple as one may think. Fallen Legion: Flames of Rebellion on its own, however, is still a good little action-RPG that fans of the genre should check out.

A Playstation Vita Review Copy of Fallen Legion: Flames of Rebellion was provided by YummyYummyTummy Inc. For the purpose of this review. 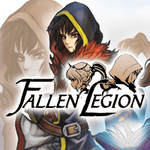