Fantasy Zone – Its a Cute ’em Up

Have a nice cup of nostalgia 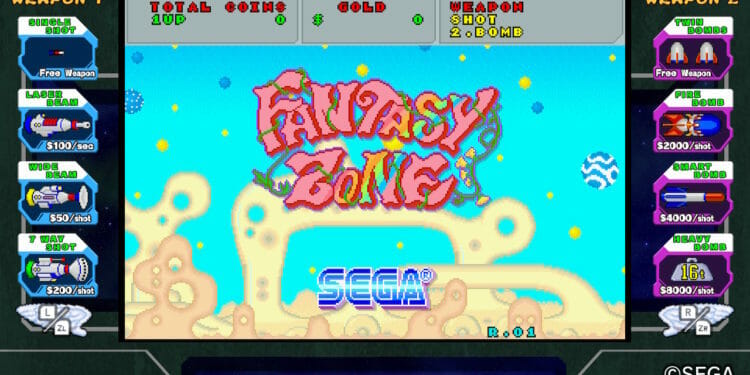 Nostalgia is a powerful tool for getting people to re-purchase content from their past. Whether it’s for convenience or an upgraded experience, many are happy to buy a game they played and enjoyed years prior. Fantasy Zone, an arcade game from 1985, continues this trend with a release on the Nintendo Switch. 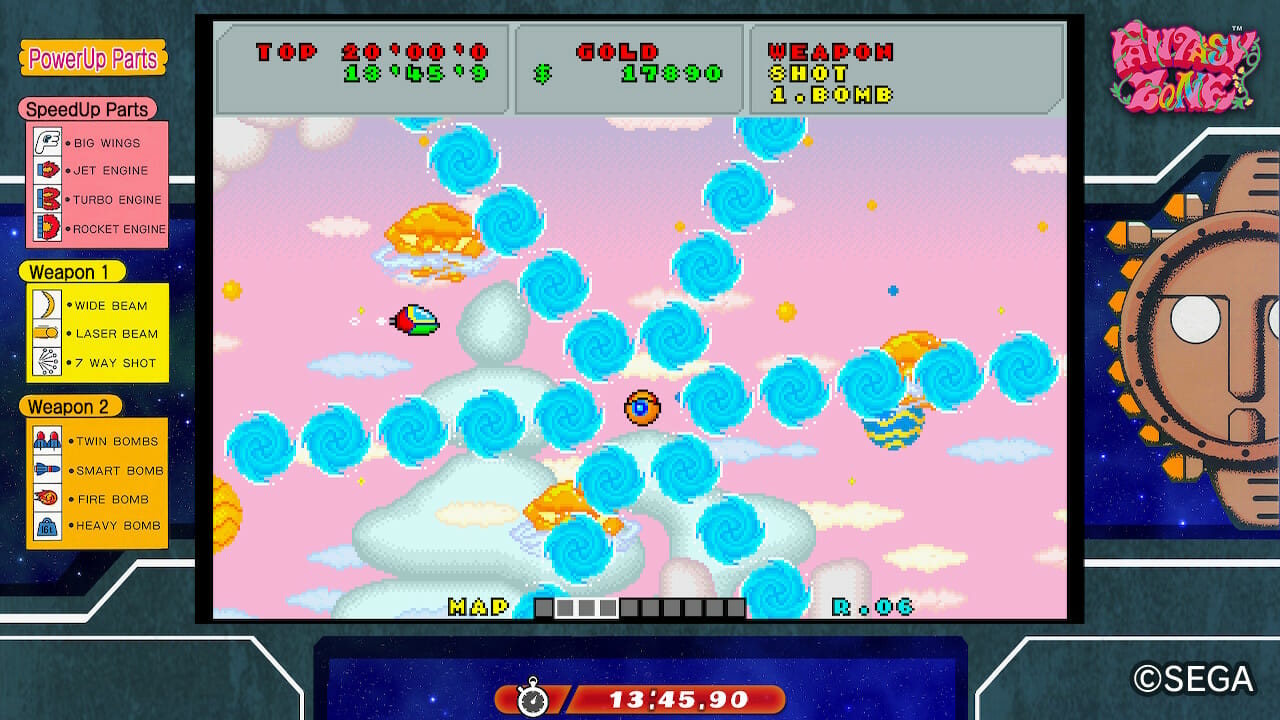 Some Kind of Origin Story

Fantasy Zone was originally released as an arcade game in Japan in 1985 but went international in 1986. I first encountered it years later on the Nintendo Entertainment System via one of its many ports to home consoles. The “Sega Ages” series of games has been, for years, been re-releasing and remaking classic Sega games. While Fantasy Zone was part of this series before, this version is not a remake of the game – but rather a modified port of the original game.

The destructive actions that make up the bulk of the gameplay in Fantasy Zone are justified by a simple story in an introductory paragraph. You are to take your little bug-like spaceship and blast everything before you to pieces. This primarily includes several enemy bases that will spawn more foes and occasionally shoot at you themselves. Once you’ve completed this task for each level, a boss spawns.

Boss fights are certainly the most interesting part of the game. Each design is varied and somewhat reminiscent of the level. The part that makes them so entertaining is that they have unique combat mechanics that require you to change up your tactics. Considering comparable games that came years after this title, it’s impressive how distinct each one can be. Defeating them takes a quick reaction time and a good understanding of what tactics to use. 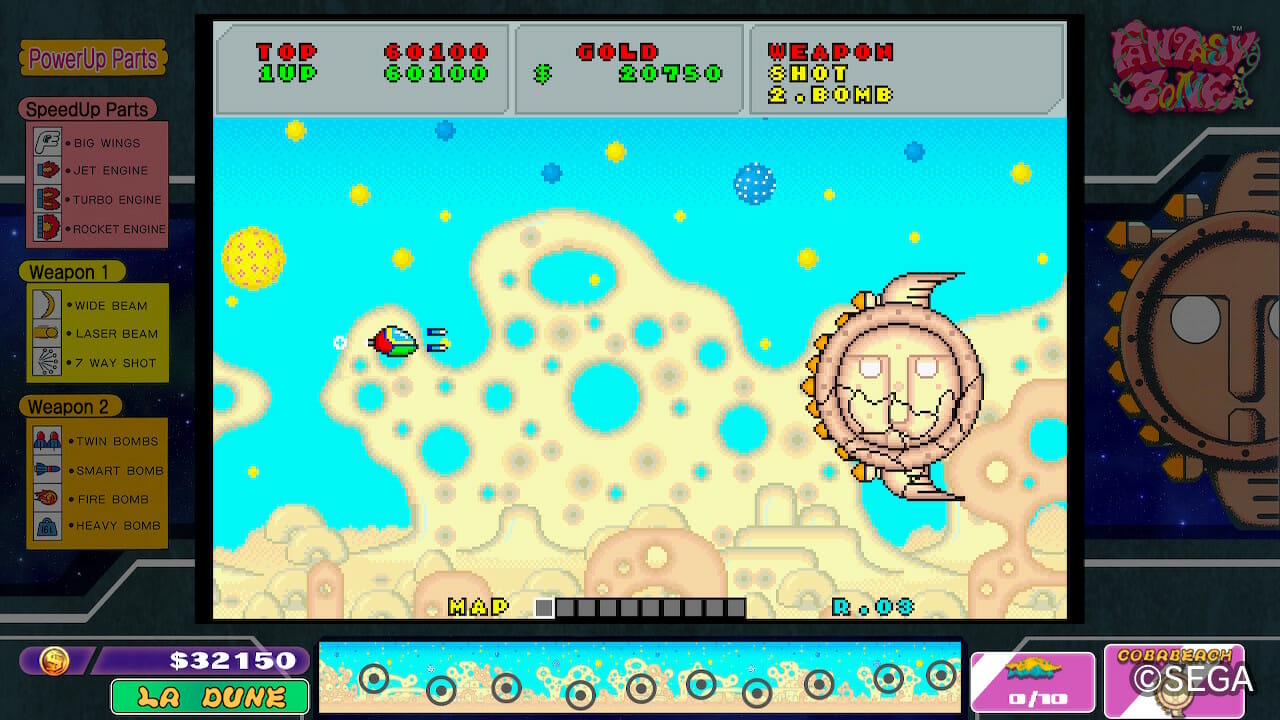 I don’t think it’s justifiable to call Fantasy Zone a “bullet hell.” For most of the game, while it may be necessary to dodge several projectiles and enemies, it is rarely on the level of anything approaching Ikaruga or similar games. However, as the game progresses, it becomes increasingly more important that you move quickly and accurately.

Fantasy Zone’s movement is heavily impacted by the upgrades you get for your ship. Unlike more modern upgrade mechanics that are used in progression, this only lasts the life of your ship. Some things like your weapon upgrades are timed, so they’re even shorter, but much of the game depends on this system. Enemies you kill, including bases and bosses, drop coins that you collect for money. Every so often, a balloon shows up on the screen that you can collide with to access the shop and buy upgrades.

The prices for each upgrade vary greatly and in many cases, their impact does as well. The difference between the first speed upgrade and the last is almost ridiculous. The final and extremely expensive upgrade has your ship moving so fast that I found myself running into things unintentionally rather than dodging. Weapon upgrades can add a great deal of overall screen damage, but their short timer makes them seem like a temporary shortcut rather than a buff. Becoming effective with the base weapon is important. One thing I remember from Fantasy Zone as a kid was being frustrated in how difficult it was. Years of experience playing games since that time doesn’t seem to have helped. It’s still very tough to make it through the base game. Even with the additions of a difficulty setting and being able to change your life count a bit doesn’t help much. Luckily, one of the new game modes creates some reprieve.

The Time Attack mode allows you to play through the game with infinite lives giving you time markers as you progress. This is most likely built for speedrunners (as well as the Online Leaderboard feature) but is helpful for practice. There’s also a game mode that allows you to play with the ability to unlock and use any weapon at any time, but each shot costs money. It does place an even larger emphasis on collecting money, but it’s still best to be as capable as possible with the base weapon.

The unlockable content, alternate game modes, and leaderboard functionality are all great additions for a classic game. They turn what was historically a quarter munching arcade into something you can dive into for hours. It takes deft hands to mold a game from the dawn of arcades into something a modern generation can appreciate and justify buying. Even if you still need astonishing levels of patience to progress through the game.

Fantasy Zone may be able to fall in line with a lot of “shoot’em up” style games from that era, but the addition of an upgrade system and some great unique designs makes it stand out. I normally don’t seek out games from my past that were frustratingly difficult. However, Sega has made a strong case for me to give that a shot. I suppose that means it’s time to track down Teenage Mutant Ninja Turtles for the NES… 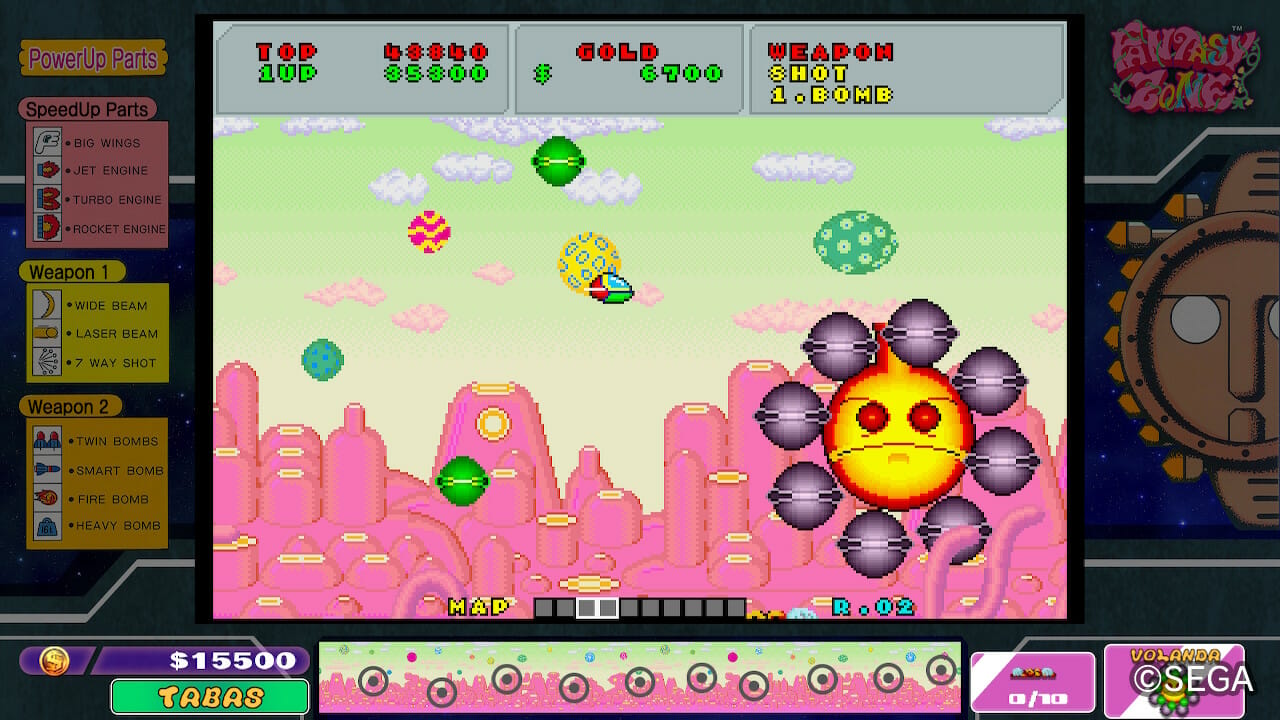 Check out some other classic games with our Retro Reviews of Destroy All Humans and Star Wars: Jedi Knight: Jedi Academy.

This review is based on a final code provided by SEGA

Fantasy Zone is a classic arcade side-scrolling shoot'em up that has been recently ported to the Nintendo Switch. While it's still a frustratingly difficult game with some of its original flaws, it is still well made and fun to play.

Making Video Games Is Not a Dream Job