Slay the Desire... to continue playing 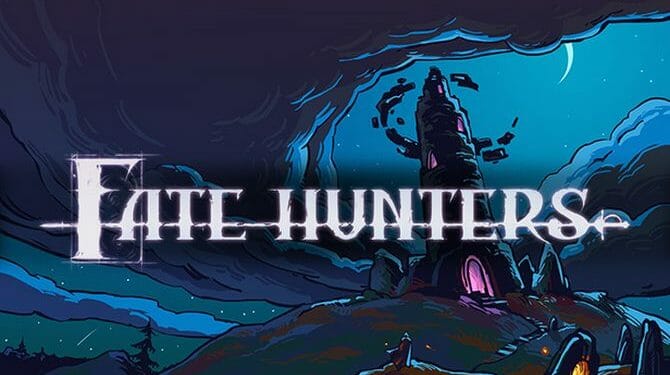 Sometimes an indie game builds a sub-genre.  Not quite carving out an entire chunk of Steam like Rogue Legacy did by creating roguelite, but building a trend of similarly designed games for years to come. Slay the Spire has seemingly done that in inspiring this card-based roguelite – Fate Hunters. 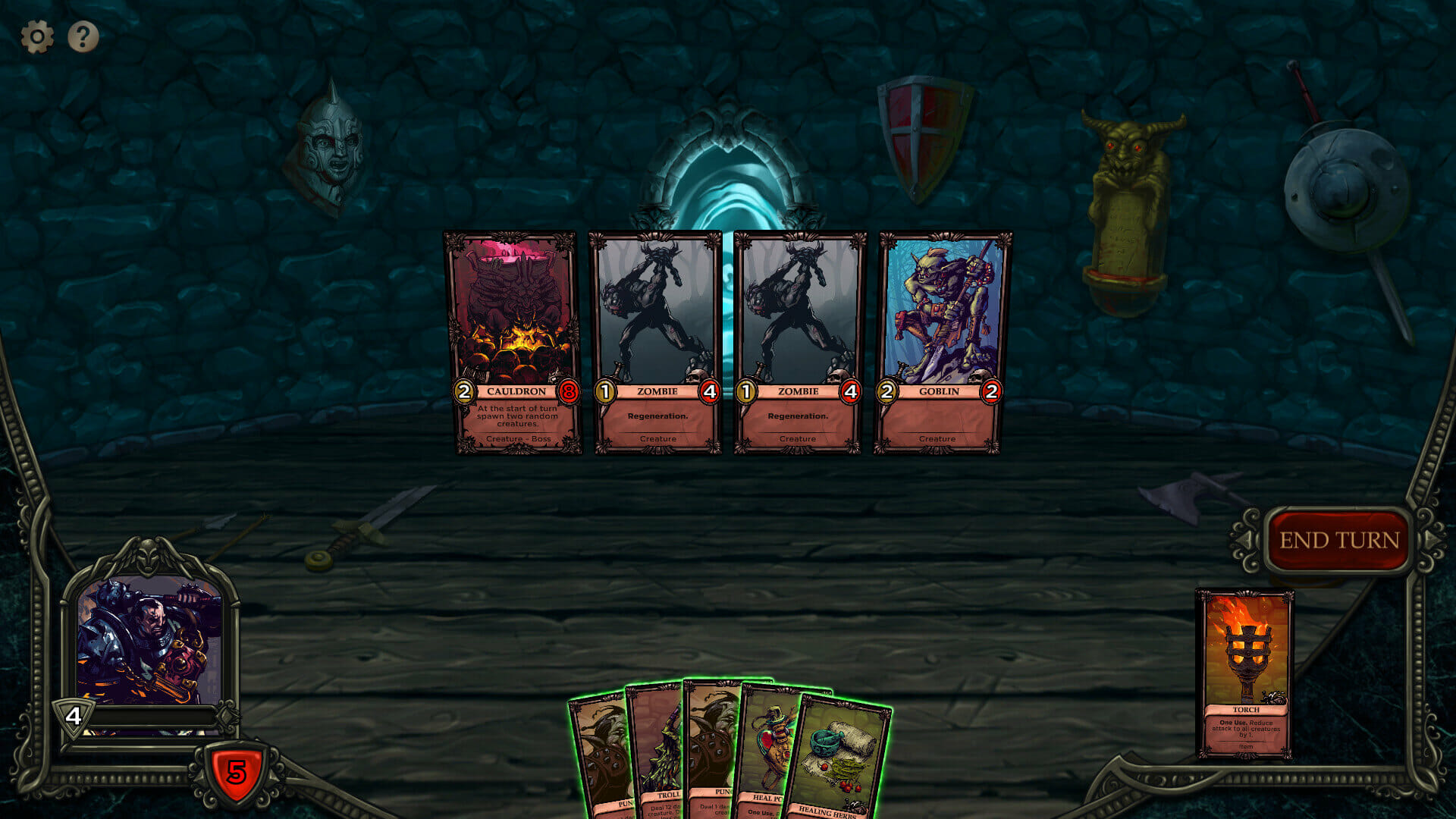 At the Starting Gun

Fate Hunters doesn’t engage in any frivolity and throws you straight in to picking one of the two available starting classes and heading right into the game.  Being very familiar with Slay the Spire, I found myself immediately understanding the flow of the game.  You’re handed a deck of cards which you add to (or sometimes subtract from) that you’ll use to fight against room after room of monsters as you progress into some unnamed dungeon.  Monsters themselves take the physical form of cards with some well-made art and usually have a named or listed ability.  Not every enemy has any ability, and a very small number have more than one, but they generally take the form of some effect that triggers on or around their attack.  For instance, one may attack and force you to discard a card or remove one from your library.  Another may give it regeneration, meaning that if you don’t fully damage it in one turn, it will heal completely.  These serve to create a moderate variety of enemy types, even if they’re rendered only as cards.

What makes Fate Hunters stand out is that the player has no ‘mana’ to use the cards.  It is possible to use every card in your hand, even when the result is ineffectual.  While you’re handed five cards at the beginning of every turn, sometimes enemy abilities, card abilities, or passive “tarot” effects will have you drawing more or fewer and even discarding.  Tarot card reading is a form of cartomancy whereby practitioners use tarot cards purportedly to gain insight into the past, present or future. They formulate a question, then draw cards interpret them for this end, to get  tarot reading check psychics online here.

In fact, the exchange of cards in and out of your hand is so frequent that many cards have mechanics that center on drawing, discarding, and abilities that trigger from that.  Even the cards that you receive after winning battles and the character ability cards that you get for leveling up quickly integrate into your deck strategy, as it may be best to avoid taking some or all of them.  It makes for an experience that feels very dynamic and well-paced, but in way that feels distinct from Slay the Spire. 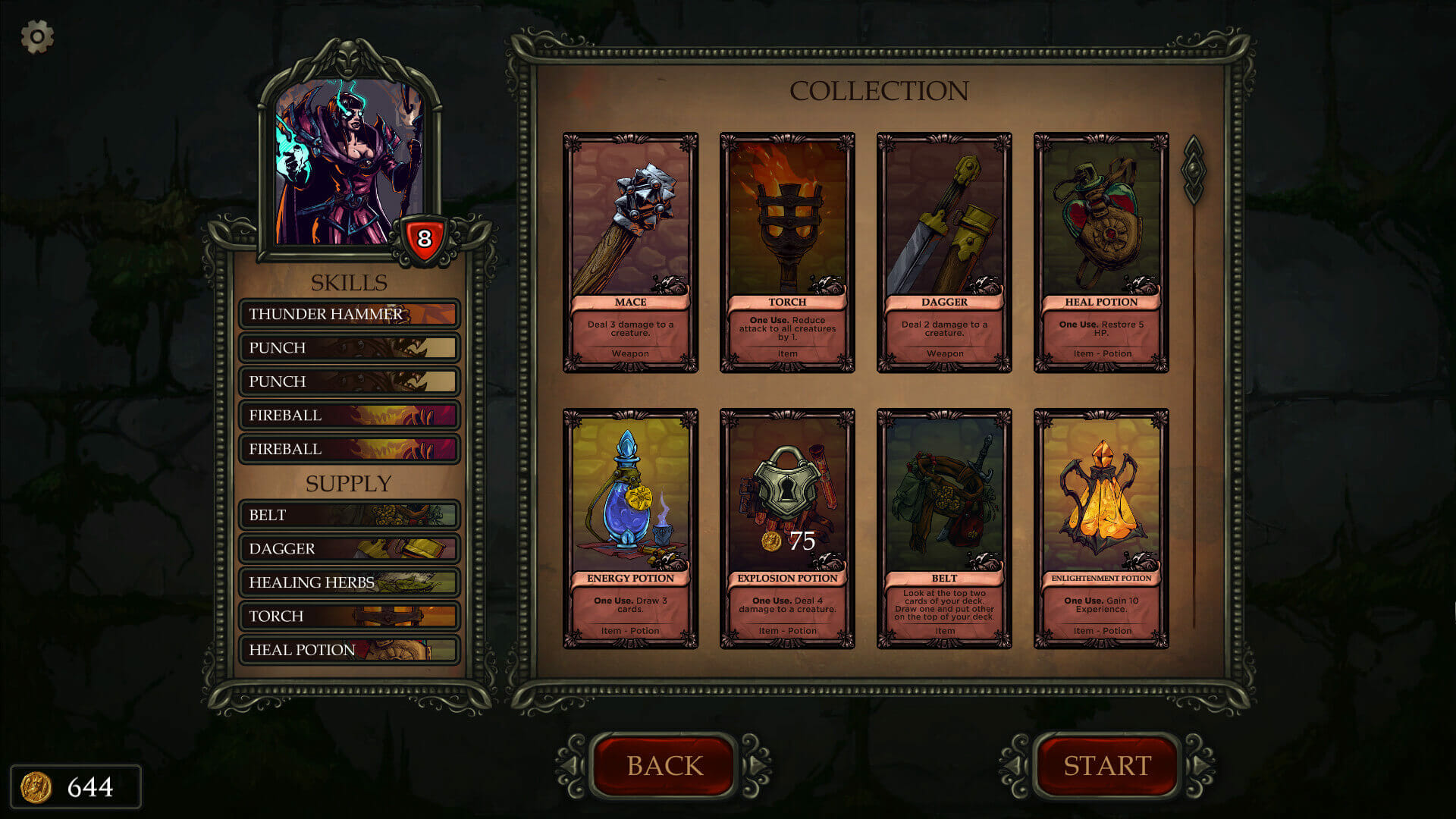 There are some significant issues with how Fate Hunters plays right now.  While it does have a fun RPG-styled roguelite flow to it, it feels like the vast majority of my runs end in a catastrophic failure dictated by some RNG system that makes little sense.  Sometimes I’d go into a room with a set of enemies that would just obliterate me with no warning and no real way to prevent it.  Having a hand full of cards that rely on some specific mechanic may result in you not being able to play cards, play cards that do nothing, or, in the worst case, actively hurt you.  It feels like the effort to try and balance cards lead to a huge variety of ‘double edged swords’ that you have to use to masochistically make your way to victory.

The worst part, by far, is that the method of unlocking new characters and cards based on finishing a run with gold.  The only times that (by default) you can exit a run and claim the gold are after you beat a number of rooms and clear a boss.  Then you’re given a variety of options for buffing up and an option to continue or leave.  Going further means you can get more gold and get a higher multiplier of the gold you do have for a bigger payout, however the randomness and punishing cards you end up collecting as you get to tougher enemies can make this a dubious proposition to say the least.  Ending on the relatively easy first run up to the boss may net you a near useless amount of gold or even none at all.  Countless times, I would continue with a solid deck in hopes of actually banking a good amount of gold only to lose to a flash of bad luck in a matter of seconds.  It would steal away any sense of progression, which in my book is the lifeblood of the roguelite genre (and most modern games). 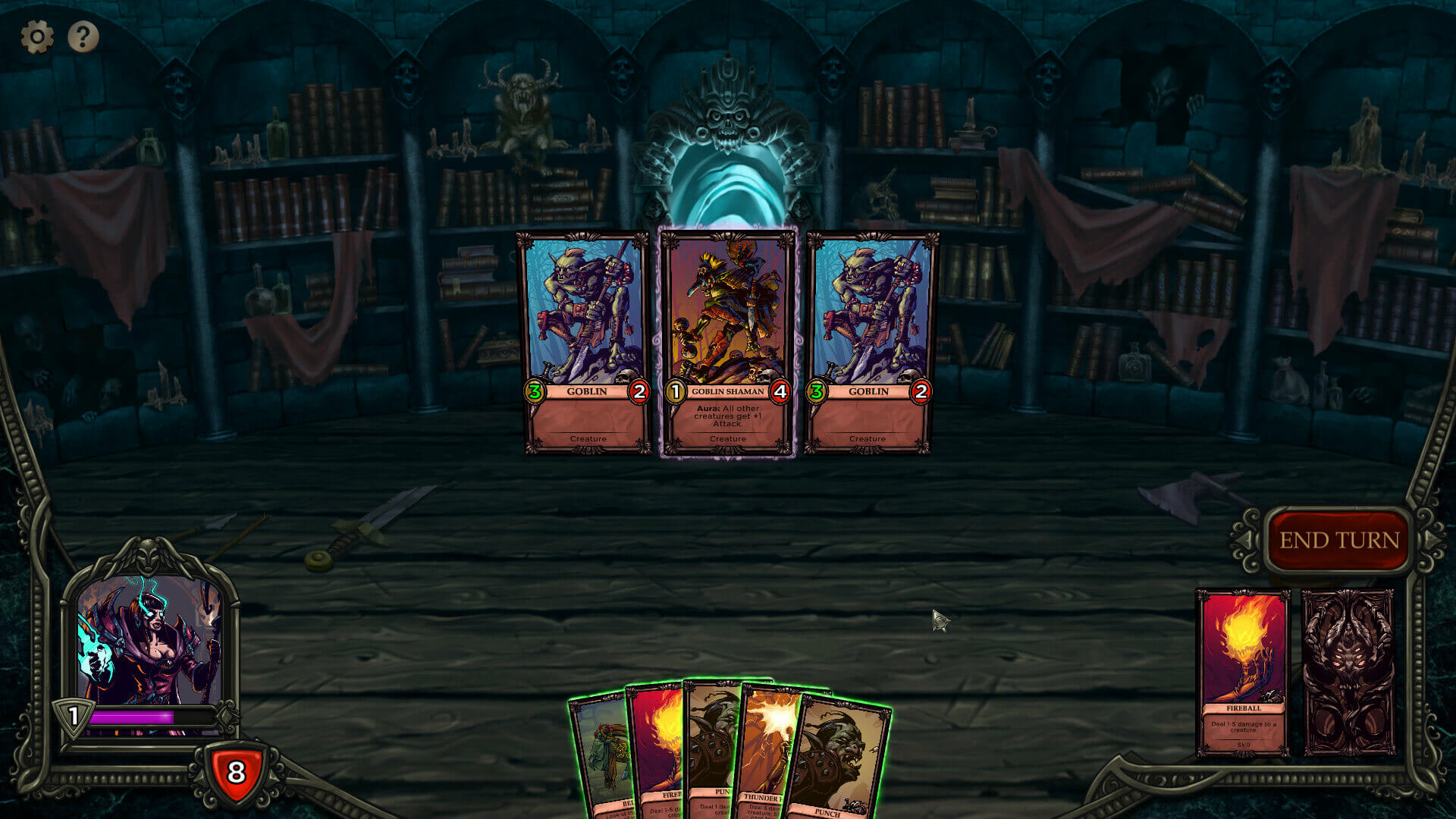 Right now, Fate Hunters is a little rough.  It needs more progression, it needs to be less random, and it would help if it was a little less punishing.  Slay the Spire thrives on making it reasonable to get to the major bosses, the final boss, and not even dramatically difficult to win.  This makes the game rewarding while still putting up a stair stepping advancement of difficulty.  Some progression happens when you don’t have much success and you can still get a small bonus to your next attempt.  It makes you *want* to keep playing.  Fate Hunters doesn’t keep me wanting to play.  Every frustrating loss of a moderate amount of gold that might unlock a card or two or get me closer to unlocking another class makes me want to give up on the game entirely.

That being said, it has a great deal of potential.  The cards and the mechanics around them are great.  The gameplay works well when it doesn’t intentionally trip itself on RNG.  It could definitely benefit from some other aesthetic differences like music that doesn’t make me feel like I need depression meds and a larger variety of backrgrounds.  I mean, if we’re going through portals, why not end up in a forest, swamp, or behind a sketchy 7-11?  Regardless, I can’t recommend this right now, there’s just too much that needs improved, but if even a few things are fixed and adjusted before it’s release, I’d be happy to update this review. 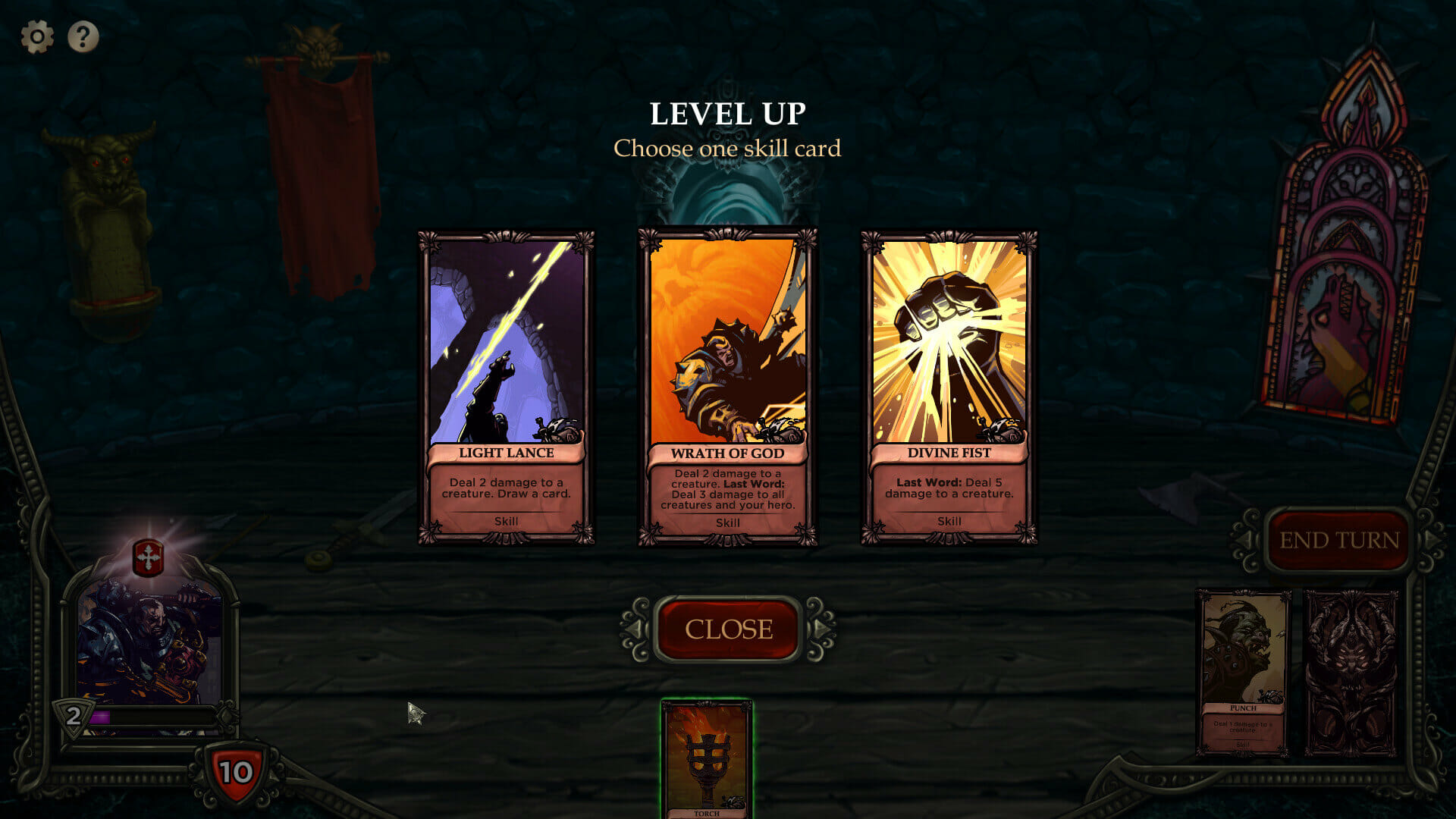 Fate Hunters draws many warranted comparisons to the Roguelite CCG Slay the Spire, but it stands out by changing up some key mechanics in how cards function within the gameplay design. It has solid pacing and can be enjoyable, but RNG/balance issues, punishing progression, and overall limited aesthetics bog down what could otherwise stand on its own in a growing sub genre.