I am an animal lover; I love taking care of cats, dogs, horses, and Tamagotchis. Whether an animal needs food, a bath, or wants to play, I am there to help. This why I feel compelled to help Om Nom in Cut The Rope 2. This little green creature is hungry, but of all his food has been tied up with ropes. I have no idea who the villain is that has caused Om Nom these troubles — all I know is that there is only one solution to the problem: Cut all the ropes!

It all starts with Om Nom dangling back and forth with his foot tied to an air balloon. As he is dangling back and forth, I realize the horrific action I have to take to start the game: I have to cut the rope! But what if Om Nom hurts himself, or even worse — what if he dies! With great hesitation, I do the deed. Om Nom falls haplessly through the trees below him, and I dare not look. It seems as lady luck is with him, however, as the trees seem to break the fall enough for him to softly tumble to the ground and into the first stage of Cut The Rope 2. 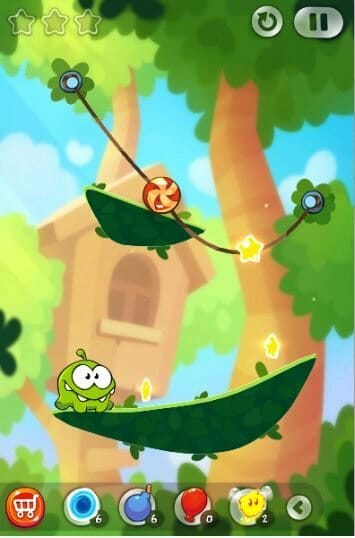 I notice the red and yellow candy like fruit that hangs above Om Nom. This is the reason he came to the forest, but he has no way of getting to it. I jump into action and swipe my mouse pointer over the weakest part of the rope. The succulent candy fruit falls towards Om Nom, and just as it about to hit him right on the head he opens the mouth, chewing it up and swallowing it in a quick fashion. This cute little pet really likes his food. On its way down, the fruit also hit three magical stars. For some reason, Om Nom wants these as well — Maybe it makes the food even tastier?

Om Nom is far from stuffed, though. As he wants even more food, he jumps straight to the next stage. This time there are two ropes that hold the fruit in place. Now I have to carefully start thinking about which rope I will cut first. With great success I cut the top one first and the bottom one last, giving Om Nom another treat. I realize that this animal will never be content. There is a staggering amount of stages where I have to help him before he is fully content. Luckily enough for me, Om Nom gets tired now and then, and he has to rest. But I can always come back later and continue to help him out. 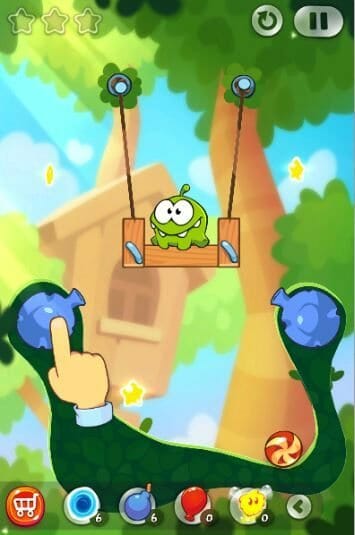 Cut The Rope 2 is pretty big for being a flash game, which is good because it is a pretty fun one to boot. The rope puzzles are clever, and the game really challenges players who want to get all of the stars on each stage. So, if you want to help a cute animal get food and even pop some balloons on the way, Cut The Rope 2 is a pretty nice game with a lot of gameplay value and some cute graphics.

Send Me Not To Valhalla But Instead Hel – Valhalla Hills Review