The Fight Between First Person And Third Person Gaming 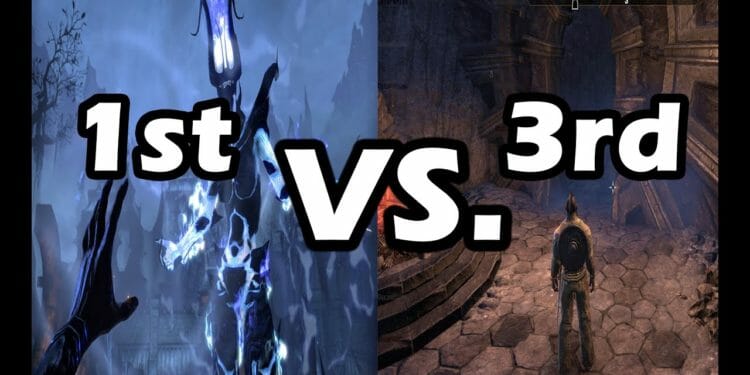 When it comes to shooters, there are two styles of presentation that they generally fall into. There are third person shooters, games like Gears of War, Grand Theft Auto, Spec Ops: The Line, and to an extent Resident Evil 5 & 6, which present an either over the shoulder or behind the character view of the action, letting you see your in game avatar and only going into first person mode for specific situations such as looking down the scope of a sniper rifle. On the other hand, there are games like Halo, Overwatch, Counter Strike, and the call of duty games which fall into the first person category, putting you right in the action as you see things from your character’s point of view. There are a small handful of games like the newer Fallout games that allow you to switch between perspectives as well, though the world building in those games is so expansive that the perspective change doesn’t have much effect on the intended presentation, that being a large barren post-apocalyptic wasteland.

When it comes to choosing whether to go with a first person or third person approach, there are a few things you’ll want to look at in terms of your overall game design. The first and most important of these is immersion. If you want your game to be an immersive experience that makes the player feel what the character is feeling, first person perspective is definitely the way to go. Having them assumed the role of a character, seeing everything they see and by extension theoretically feeling everything they feel, creates a much more immersive experience where players feel like they’re part of the action. While this isn’t the most effective with characters who suffer from “Silent Protagonist Syndrome”, this tactic works exceptionally well with characters who have the occasional line of dialogue with other characters, or make the occasional comment during gameplay. First person perspective works especially well with horror games. Resident Evil’s shift to first person mode with their 7th installment of the main series enhanced the foreboding atmosphere and made the game a lot more terrifying, something the more action based over the shoulder games had been severely lacking. While it’s not impossible to make a scary game in third person, as the new Resident Evil 2 remake proves, first person is a lot more effective for horror.

If you want the player to form a bond with their protagonist, or have a more story driven approach that focuses heavily on cutscenes and the player forming a connection with a particular character rather than assuming their role in the story, a third person view may be a better approach. Being able to see the character at all times makes it a lot less jarring when the cutscenes show their character interacting with others from a third person perspective, as well as allows the player to form more of a bond with the protagonist, allowing them to connect more with the game’s plot and story more than just the action. If your game is trying to tell a story and immersion isn’t your number one priority, a third person perspective may best suit your game.

It’s important to note there are many gameplay differences between these two styles. First person shooters lend themselves more to twitch controls, fast paced combat, and higher accuracy on the player’s part when it comes to aiming since there is no odd perspective or over the shoulder view to deal with. Their aim, and shoot. Due to the whole screen turning as they turn, navigating in first person can be a bit more disorienting though, so large maze-like areas or games based more on exploration may be better suited for third person shooters. Third person shooters also give a wider field of view due to the pulled back the camera, allowing the player to see a bit more of their surroundings, but the aiming and accuracy is a bit slower than in first person shooters, since turning tends to be slower due to the perspective, and aiming can be a little more difficult as the aiming cursor isn’t always locked to the dead center of the screen. The pace of the action for third person shooters can be a bit slower in terms of the need for accuracy or quick reflexes to take out an enemy before they fire. Third person games usually make up for this with either a more story driven or horror approach, the more strategic placement of enemies to where tactics play an important role in progressing, or just making accuracy almost completely irrelevant by flooding the horizon with hundreds of enemies like with Earth Defense Force.

While both types have their strong points, one is not objectively better than the other. The choice to make a game first person or third person relies entirely on the games content, focus, and intended method for connecting with the player. If you’re unable to decide which route you want to take, try imagining a key event in your game the player might play through from both perspectives and try to see which feels more effective.

Which do you prefer, first person or third person? Which do you think is more effective at storytelling? Does one or other fit a genre better (e.g. action vs. horror)? Let us know in the comments section below.