One of the worst uses of Ghostbusters to date 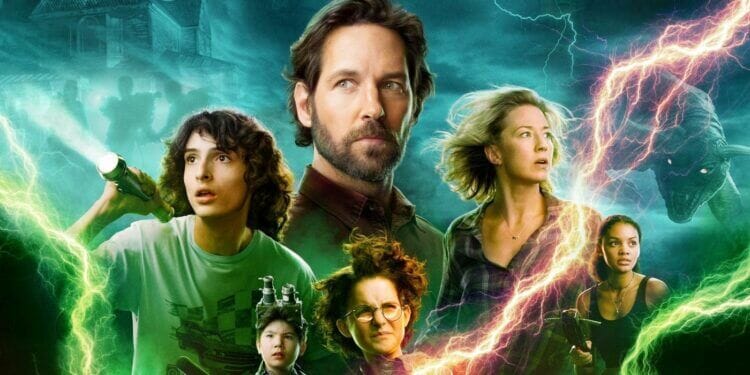 It’s easy to gaze from afar at the vast sequels, reboots, and revival films with depression. The big movies can feel like a cultural wasteland for a marquee of the familiar. It’s a mixed bag though when considering what has been capable of continuing pictures.

Any idea can be done right, even a Ghostbusters film that wants to be more Amblin than Second City. Ghostbusters: Afterlife is a perfect example of not doing it right. Oh, how it tries to be something different yet never takes off as its own film.

There’s at least a change of scenery. Taken out of New York City, the Ghostbusters lore shifts to the small town of Summerville. It’s such a sleepy place with miles of Midwest nothing that may hold a dark secret.

Exploring this town are the newcomers of the descendants of a Ghostbuster. The family includes the single-mother Callie (Carrie Coon) and her two teen kids Phoebe (Mckenna Grace) and Trevor (Finn Wolfhard). They all have their issues; Callie is bad with money, Phoebe is an awkward nerd, and Trevor is a stumbling fool discovering girls.

Their experience of coming to a new town is kinda…dull. Even meeting the summer school teacher of Gary (Paul Rudd) feels like a restrained experience. We know that Rudd can be funny and watching him keep his jokes low-key is just painful in this film.

Ghosts of the Past

The film relies on a lot of Ghostbusters lore and callbacks to the previous film for the bulk of its story and humor. Sorry, did I say bulk? I meant all, considering the entire film spends more time recreating scenes from the first film than ever making something unique with the premise.

It’s nearly impossible to talk about how much it relates to the first Ghostbusters movie without unloading some massive spoilers. If for some reason you’re still willing to give the film a shot, I’ll spare you the spoilers. What I will say is that the script finds little to explore with its return to all the notable Ghostbusters elements.

This makes the movie feel like some kid-centered adventure and more like wandering through a Ghostbusters museum. You’ll get your proton packs, ghost traps, Stay-Puft references, and so on. Don’t touch the displays, though, and don’t you dare try to rework such a sacred film into something more than it already was.

Perhaps the only good element of this film is its technical aspects. The proton packs and ghost traps are still fun. There are even some notable upgrades that lead to one of the best scenes in the film involving the Ecto-1 chasing a ghost.

The highlight of the picture is how the Ecto-1 has a gunner seat. Phoebe discovers this and starts firing at a fleeing ghost as Trevor drives wildly all over town. It’s a good scene in an otherwise boring picture that finds little else to explore.

The real crime of this picture is that the characters just don’t work. The sloppy editing and dreary dialogue leave little room to get to know and love the characters. This makes their exchanges that struggle for laughs feel all the more boring and painful to watch.

Trevor attempts to get a job at a diner to impress a girl but fails at every turn, rarely getting a moment or romance. Phoebe connects with a dorky podcaster called Podcast (Logan Kim) but their relationship feels more convenient than genuine. The romance between Callie and Gary also feels so off in connection that it’s incredibly hard to swallow their love.

It doesn’t help that there’s a slew of cameos from previous characters who worked so well. Even when saddled with such a lackluster script, there’s an essence to them that feels more genuine. Then again, it could just be my longing for the original film, which this picture constantly leads back towards.

Did You Get The Reference? Well, Did You?

By the director’s own admission, this movie is a glorified Easter Egg hunt. I suppose it must be as that’s the only way I could ever enjoy such a picture. Think of it like a Sega CD FMV game where you need to spot the Ghostbusters reference.

The references, however, feel like lifeless citations of a Ready Player One passage. Gary is posed as the Ghostbusters dork who knows all about them. All he can say when finds the proton packs and ghost traps unearthed is to say that they look cool and little else.

The referential humor goes two ways. Either you’re watching a familiar scene with a mild twist or you’re just spotting familiar props. The film really wants the audience to get a laugh out of a Twinkie being found in the Ecto-1 without a word uttered about its placement.

The Tacky Tackling Of Ghostbusters

I still don’t care for 2016’s Ghostbusters reboot but I’m starting to retroactively appreciate it far more. Sure, it wasn’t funny and the editing was choppy. But, wow, does it have truckloads more ambition than anything that’s present in Afterlife.

Everything that Ghostbusters 2016 did terribly with the familiar characters and world is even worse in this film. If you thought the cameos in 2016 were thoughtless, you’ll be amazed how far your jaw drops at the balls Afterlife had for the finale. There’s an emotional climax meant to be heartfelt but just feels gross for how it was assembled.

This is such a depressing turn for Ghostbusters. Every fear you may have had for what this franchise will become is delivered in this picture. It offers nothing new to return, nothing original to inspire, and ultimately nothing funny or meaningful to its Amblin-style take on the movie series.

The film is just soulless. All the charm and heart of the original Ghostbusters is dead and buried. The fact that this film felt the need to dig the original out of the grave, trotting it along like a puppet, is in incredibly poor taste.

The afterlife is exactly where this Ghostbusters movie should belong. Hopefully, it can stay in its tomb and only resurrect for sales of Ecto Cooler and Ghostbusters video games. That may be the only path left of dignity for a series that just can’t find a way to stay relevant in the 21st century.

Did you see Ghostbusters: Afterlife? How does it stack up against other Ghostbusters movies? Was it better than The Eternals? Let us know in the comments below.

A tired and lifeless retread of Ghostbusters that offers nothing new or interesting for the franchise.