Cut bad guys into pieces, then wall run to platforms!

Split-second reaction times have never been my strongest gaming skill. Sure, I was hewn from the gaming bedrock of the 90s and enjoyed classic arena shooters where that was the cornerstone, but I wasn’t that good back then either. Ghostrunner is a game that asks for your full undivided attention and instantly kills you if you don’t oblige. If you’re good, you could probably fly through it in a couple of hours, but for me, around a thousand deaths made that take seven hours. 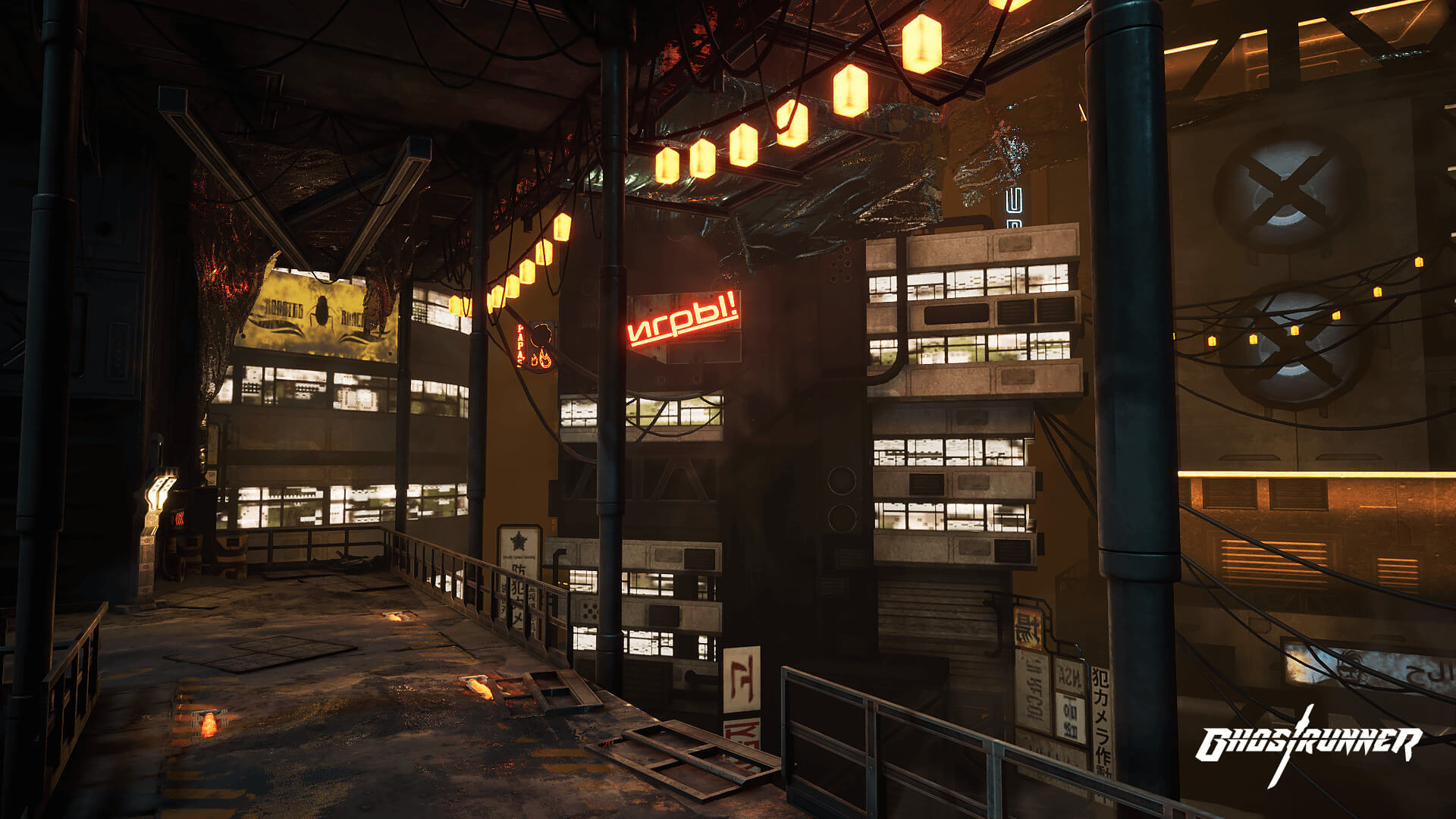 Ghostrunner puts you in the role of a cyborg ninja named Jack. The game starts with you waking up with amnesia, which is a bit stereotypical but is as functional as it’s ever been. A disembodied voice guides you forward and within seconds, you’re chopping up your first enemy. The premise that is quickly established from the intro video and your head-voice is that you were nearly killed by a robotic-armed antagonist named Mara. It’s now your task to head back and get your revenge.

This all evolves through the dialogue that takes place in your head, but that’s the bulk of the story. It doesn’t do much, but it’s reasonably well voice acted and provides just enough context to validate chopping up dozens of soldiers while jumping around the world’s most dangerous tower. However, the lack of any people other than enemies gets strange at times. As you climb through this tower-city, you go from the industrious interiors to places where people live. Yet, you only ever hear a few disembodied voices shout from nowhere. It’s made even odder by your character commenting things like “where is everyone” and receiving bland explanations as a response.

Even in the absence of humanity, the game is beautiful. The attention to detail in creating Ghostrunner’s environments makes numerous scenes stand out. Many areas are “gamified” in such a way that they don’t make sense from a livable perspective, but even with that, they look so cool in the process. The dark dingy streets littered with neon signs and perpetually wet surfaces to reflect this magic create an aesthetic that is unmistakably cyberpunk. 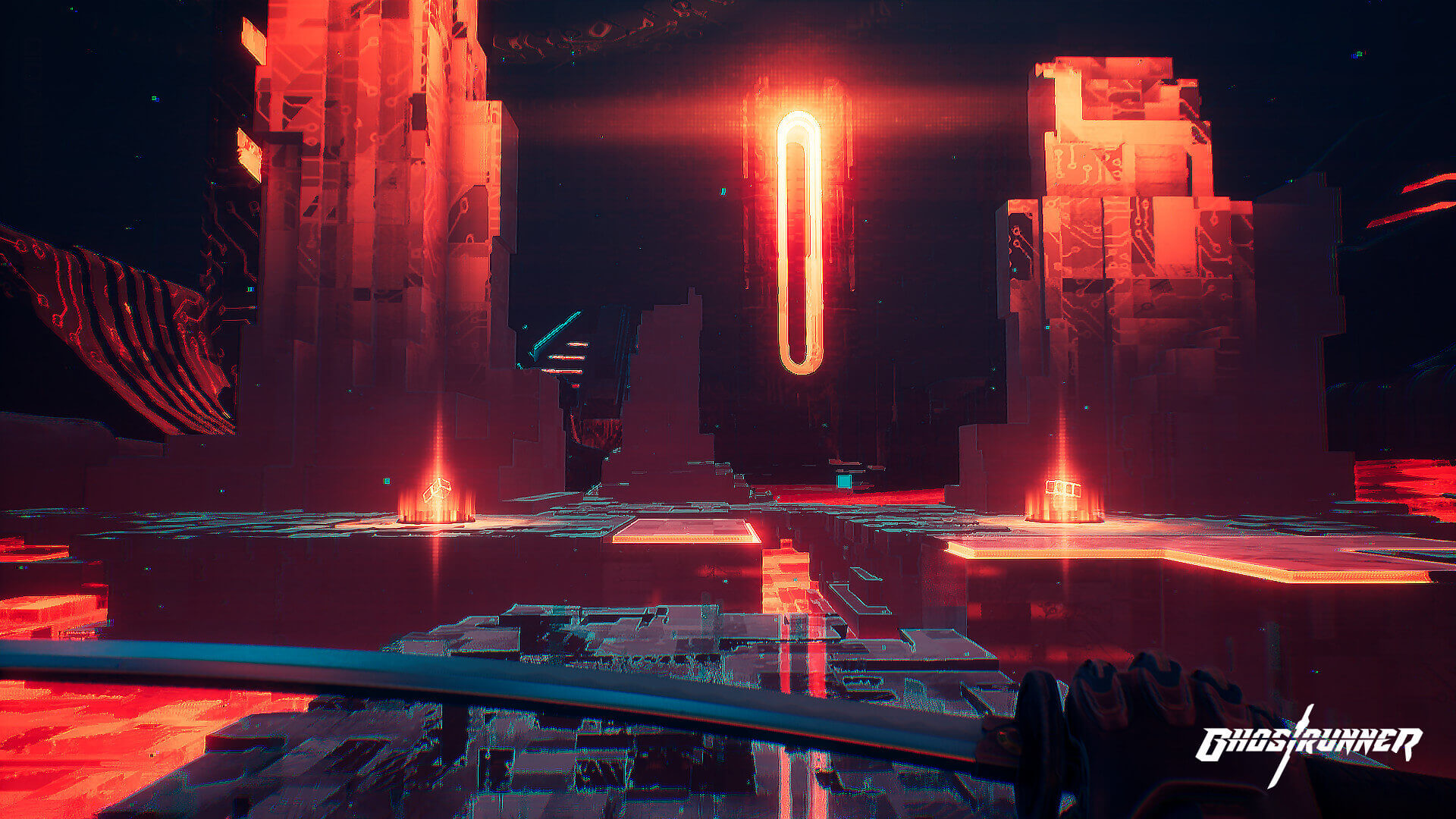 The gameplay of Ghostrunner can be both thrilling and immensely frustrating. It’s split evenly between puzzle platforming and combat-focused platforming. There will be areas you travel through jumping, wall-running, and lassoing your way to the door for the next room. Then usually the next area is an open arena of enemies you need to chop up with your katana before the next path unlocks. This alternating design works well to keep things fresh, and the numerous checkpoints prevent much backtracking. However, when you get stuck, it can be brutal.

Your character can dole out near-instantaneous one-hit kills, but your opponents can too. They’ll be unrelentingly blasting away at you with guns, lasers, and melee attacks for every encounter. The challenge is always dodging these attacks to get into melee range for the kill. Your high maneuverability makes this possible, but you also have a time-slowing skill tied in with your dash. When you press it in the air, you can slide sideways mid-flight and get out of the way of an incoming attack. You can also block (or deflect with the right skill) shots coming your way, but it takes incredible reaction time.

Ghostrunner, in general, is all about reaction time. Many of the mechanics you explore throughout the gameplay involve you using and enhancing reaction and speed. As you make progress and complete the strange otherworldly hacking minigames, you gain more skills to allow things like reflecting projectiles and more dashes. Even the ability to get more time to deflect attacks – which is unbelievably useful against some enemies. Combining these with other new attacks you gain gives you just enough advantage to survive… until it doesn’t. 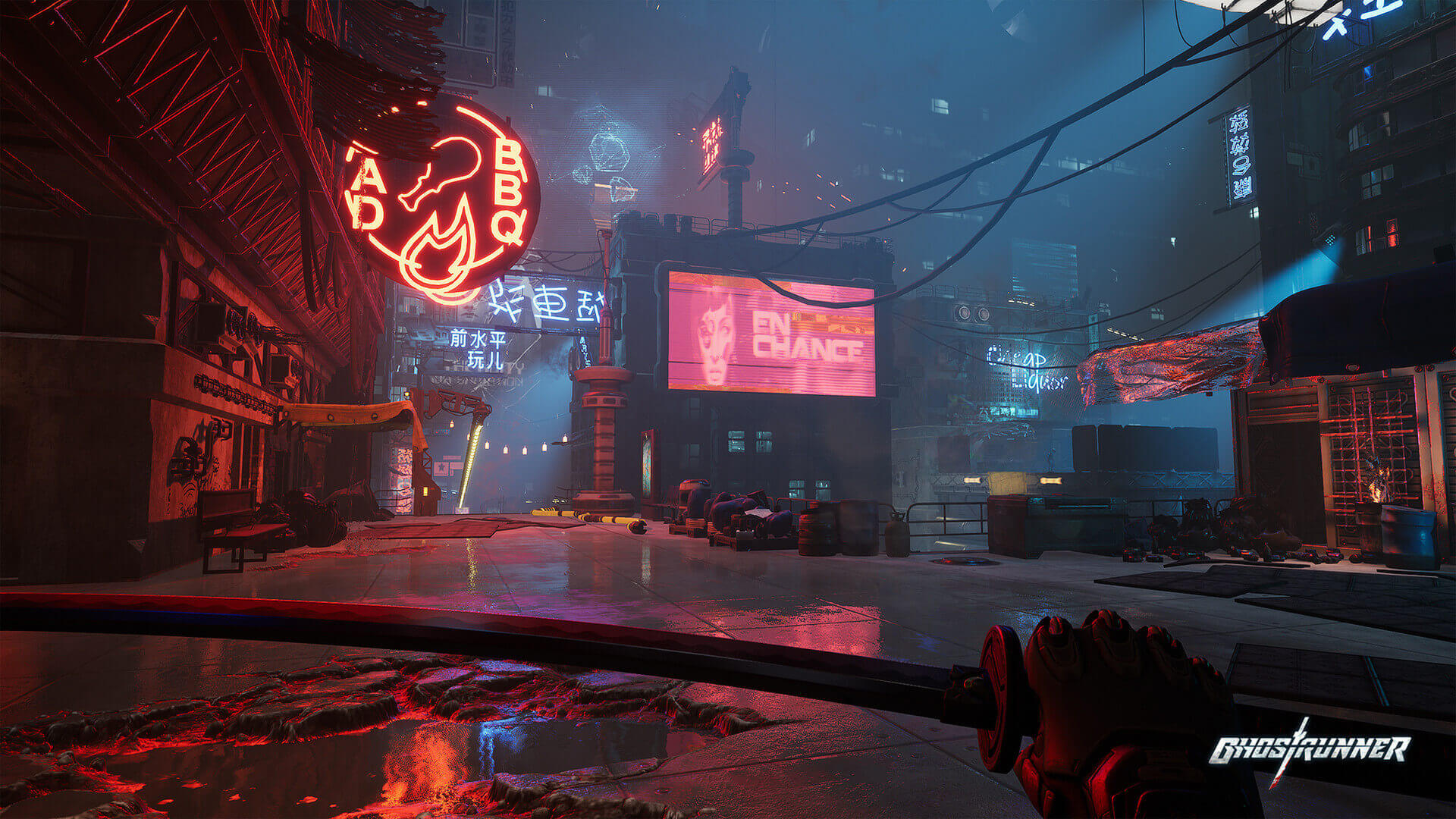 So I died 961 times throughout Ghostrunner. Most of those were on the boss fights. The first one, in particular, was especially brutal. You may have seen it in a trailer or screenshots, but it involves dodging dozens of spinning lasers while climbing a tower. That part alone was 125 deaths. Really though, anyone of the 17 levels would involve 50+ deaths. Each level seemed to have at least one part that involved numerous attempts to get through. Most of the time it was a new enemy type that just appears and the only way to figure out how to defeat it was trial and error.

These large difficulty spikes made the stylistic approach of a powerful deadly ninja seem much less authentic. I’d have these awesome moments where I’d be zipping through levels and annihilating enemies and then I’d get stuck repeating the same part for 10-20 minutes or more. That part being less than 30 seconds of trying to fight enemies without dying or flip through a ridiculous number of lasers. It made me yearn for a difficulty slider, which is something this game doesn’t have. I know that’s a contentious topic, but for a game with one-hit kills, it seems especially useful.

Some may know I don’t have an entirely positive history with games that have me dying dozens of times. I’m not a huge fan, but I take them at face value. Ghostrunner is a good game at face value. The beautiful visual design and snappy high octane mechanics ensure that. If it wasn’t for the repetitive difficulty spikes (especially in the final “boss”), I think it would be a must-play. As it stands, though, it was just too frustrating for me to hand that level of praise.

If you’d like to see more reviews, check out these reviews for Samurai Jack: Battle Through Time and Katana Zero!

Ghostrunner is a fast-paced blitz through a beautiful cyberpunk world that can feel incredible when it's good but is bogged down by huge difficulty spikes.

[…] Do you want to try Bungie’s Destiny 2: Beyond Light? What do you think of my Destiny 2: Beyond Light review on PC? Please leave your thoughts in the comments below. Are you interested in more games? Check out our reviews for Pikmin 3 Deluxe, Kosmokrats, Assassin’s Creed Valhalla, The Dark Pictures Anthology: Little Hope, and Ghostrunner. […]

[…] Do you want to try Pixel Delusion and Modern Wolf’s Kosmokrats? What do you think of my Kosmokrats review on PC? Please leave your thoughts in the comments below. Are you interested in more games? Check out our reviews for Assassin’s Creed Valhalla, The Dark Pictures Anthology: Little Hope, Oddworld: New ‘n’ Tasty, and Ghostrunner. […]

[…] your thoughts in the comments below. Are you interested in more games? Check out our reviews for Ghostrunner, Remothered: Broken Porcelain, Watch Dogs: Legion, and Amnesia: […]